Belum Caves - Into the Abyss 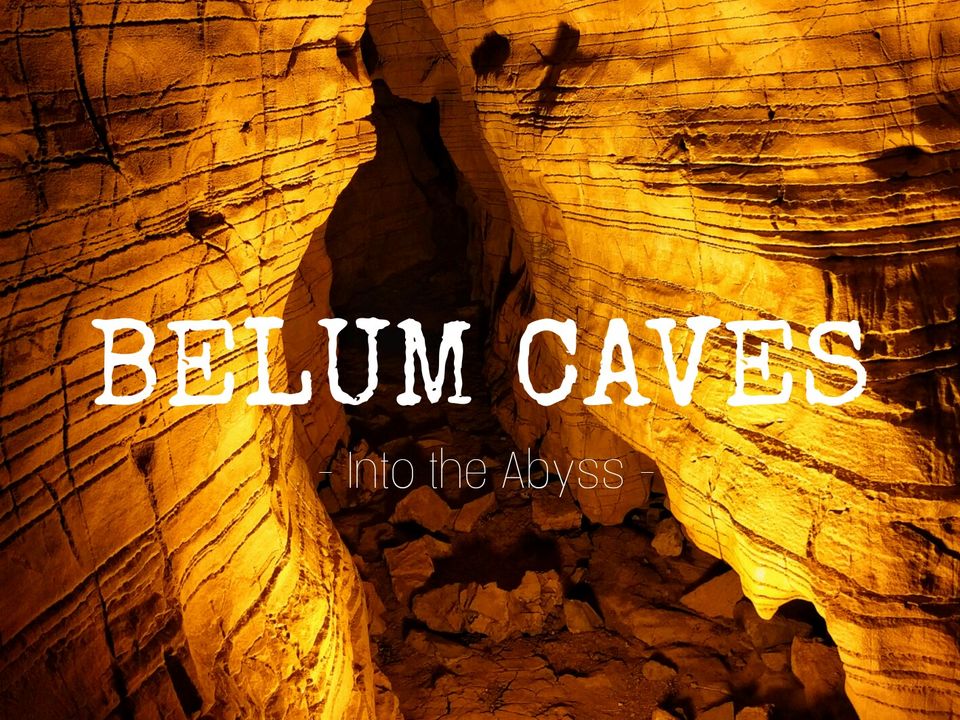 A visit to Gandikota isn't complete unless you pay a visit to the much understated Belum Caves. But be warned, these aren't the average caves that you come across in most other parts of the Country. Read on to find out what sets them apart and why they should be a part of your itinerary for Andhra Pradesh.

Imagine something so alien and out of this world, something you’ve never seen before. Imagine taking a flight of stairs straight into a demonic crevice on the earth’s surface that quite literally takes you to the depths of hell, with its deepest and darkest point aptly named ‘Pataala Ganga’ (Ganges of Hell). With every step, you feel the fiery flames of the afterworld getting closer and you sweat profusely, probably more than you ever knew you could. As your eyes adjust to the dimly lit walls and you’re senses are given a run for their money, you’re left with your jaws wide open at the stunning array of speleothems of stalactite and stalagmite formations (or in English; various forms of icicle-like rock formations) and you’re left wondering in awe; if hell could be this beautiful, you might just consider permanent residency.

That’s what Belum caves are for you; a magnificent network of natural underground cave systems shaped by the forces of nature and hidden in plain sight. Formed over the course of tens of thousands of years by the constant flow of underground water, it is an extensive array of long passages, spacious caverns and freshwater syphons made out of black limestone. At over 3.5 kms in length, they are the second largest natural caves on the Indian Subcontinent after the Krem Liat Prah caves in Meghalaya.

And although out of the total 3.5 kms, only nearly half of that is accessible to visitors, the Andhra Pradesh Tourism Development Corporation (APTDC) has gone over the top in developing these caves to its present form. With ambient lighting, air ducts, stairs, passageways and signboards at all strategic locations and even an artificial fountain? make exploring these caves a breeze and a lot less terrifying. Though all this has left the place devoid of any natural fauna, when you’re almost a kilometre deep under the earth’s surface, you don’t want to be uninvited guests to whatever lurking beneath that may have made these caves their home.

With over 16 pathways, these caverns bring alive your wildest Indiana Jones fantasies with a few of them imaginatively named more so for the purpose of identification than having any historical or factual relevance starting with the Dhyan Mandir or Meditation Hall near the entrance. Believed to have been used by Buddhist monks centuries ago due to the Buddhist period relics found here, it consists of an interesting formation that looks like a bed with a pillow to recline.

Then comes a natural arch made out of stalactites formations (a tapering structure hanging like an icicle from the roof of a cave) in the shape of a lion’s head and aptly named Pilli Dwaram or Cats Gate followed by the Kotilingalu chamber which has thousands of such rock formations that somewhat resemble Shiva Lingams and a huge pillar-like structure formed from the conjoining of a stalactite and stalagmite (a mound or tapering column rising from the floor of a cave).

The Saptasvarala Guha or the ‘Chamber of Seven Notes’ apparently contain rock formations that produce musical sounds when struck with a wooden stick or even your knuckles although highly not recommended to prevent damage to these structures or simply to avoid disappointment. Another section has similar formations on its ceiling that appear like a thousand Cobras with their hoods open with some imagination of course and are called ‘Thousand Hoods’.

And last but not the least, the deepest portion of the cave system called the Pataala Ganga has a small perennial stream that disappears into the depths of the Earth and is believed to be connected to a well back in Belum village which is pretty wicked if you ask me and definitely lives up to its name.

How to Reach Belum Caves?

The nearest railway station is at Tadipatri, almost 30 kms away from where one will have to catch a bus to reach Belum Caves.

Located midway between Bangalore and Hyderabad and usually visited along with a trip to Gandikota, almost 60 kms away, you’d think the tourism division of Andhra Pradesh would invest in a handful of signboards leading to the place considering the remarkable job they’ve done inside the caves. The only hint you get is a small hillock that stands in contrast to the otherwise barren plains dotted with quarries of the famous Kurnool black tiles, with the words ‘Belum Caves’ inscribed on one of these hills (yes, you read that right) which ironically is only visible a few kilometres before. The hills are more of a hoarding and have nothing to do with the caves themselves and as always, Google maps is your best option if you’re travelling in your own vehicle.

Once inside the entrance, you almost start to feel that the whole thing is some sort of a tourist gimmick as the place looks abandoned and you have a hard time believing that you are at the countries’ second largest cave system apart for a giant Buddha Statue at the entrance that I found oddly out-of-place. But then you soon realize that's a common trend along these parts starting from Gandikota; when something so marvellous can hide so easily in plain sight.

Considering the relatively few options for accommodation in these parts, it would be best to stay at the APTDC Haritha Hotel at Gandikota and visit Belum Caves on your way back. Just make sure to book a room in advance as they do not entertain on the spot accommodation owing to the low tourist flow. There is also the APTDC Haritha Punnami guest house which is a 22-bed dormitory at Belum Caves, but again inquiring beforehand regarding their availability and booking in advance is a prerequisite. You may also find accommodation options at the nearest town of Tadipatri.

Entry to the caves is open to the public from 9 am to 5 pm at Rs. 50 per head (May 2017). Guides are usually available on the spot and you may hire them at your own discretion. Although their services are technically free of cost, a generous tip is obviously expected. I decided to save that money on water instead.

Things to Keep in Mind

Although I couldn’t find a restaurant, there was a government-run snack bar nearby and it’s a good idea to stock up on LOTS of water, as things can get very steamy (not the right kind) inside the caves and you’d be lucky if you didn’t sweat out almost all of the water you drink.

There are a number of air ducts located inside to maintain airflow within the caves that also doubles up as a means to cool your body down when you stand directly underneath them. But this is the real deal and things can get quite stuffy inside and it’s advisable to take necessary precautions if you’re prone to respiratory problems as there are no emergency exists and the narrow passageways don’t help. Keep in mind you’ll be spending at least a couple of hours inside.

Like what you read? Got something to add? Let me know in the comments section below.

For more such content please consider following my blog here.