Madhugiri fort trek is one of the best one day treks to do near Bangalore. Madhugiri is a hill located in the town of the same name around 105 km from Bangalore. Standing tall at an height of 1200 meters it is the second largest monolith in Asia after Saavanadurga.

We started from Bangalore around 6.30 AM. We were 12 people in total including our trek guide from Wanderophile, a trekking organiser in Bangalore. We were all picked up by our bus at Silkboard, Majestic metro station & KTM, Mekhri circle. Once everyone were on board the bus, there was an introduction session & then some ice-breaking games were played. It made us all get along well with each other & we all had a lot of fun. By 9.00 AM we had reached Dabaspete & stopped at a restaurant to have our breakfast & get our lunch packed.

After a journey of around 1 hour after we had our breakfast, we had reached Madhugiri town. The hill was located right next to the bus stop & we got down from our bus & started our trek under the instruction of our trek guide. Our trek guide took the necessary permissions from the authorities who were present at the start of trek trail & we all moved ahead.

The hill & the ruins of the dilapidated fort looked fascinating right from the beginning of the trek & all of us started taking lot of photos. We had to climb many stairs & pass through many gateways which made us feel like we were entering some maze. As we climbed higher, the view kept getting better. At every possible place we took breaks to take photos & also, of course, the much needed rest.

After a climb of around 45 minutes we reached a place which appeared steep & had no iron railing for support. A few in the group insisted that they'd stop here as they were afraid of crossing that steep phase. But our trek guide encouraged them & helped them cross that phase & all of us continued towards the peak.

Just after a short climb after crossing that steep phase we were at the peak. There was a ruined temple, granaries & fort walls there & we all used the dilapidated temple to rest for a while. We also had our lunch their & then explored the views from different sides of the summit.

Our group at the summit of Madhugiri hills. 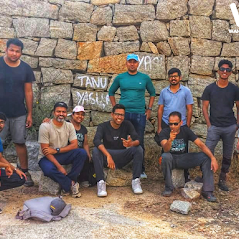 After taking lots of photos & exploring the peak, we started our journey back & reached the base in just 1 hour. We started our return journey to Bangalore & reached Bangalore by around 7.30 PM.

Checkout other upcoming treks near Bangalore .