Another day, another border crossing! We crossed the shimmering Mekong river and entered Laos, country number 4 on Road to London. The expected happened again. Faces, food, smells, trees, flowers, climate…everything changed. There was a stark contrast between Thailand and Laos. Laos seemed raw, detached from the world, calm, soothing and close to nature. It was a refreshing change to drive through the rain forests and rubber plantations which reminded me of driving through the mountains of Himachal Pradesh in India. The drive was picturesque as we crossed small villages where most houses were built on wooden stilts to prevent being washed away by floods in the monsoon season. On the way to Luang Namtha, our one and only night stop in Laos, we stopped for lunch at a small road side restaurant where while we were enjoying the Thai curry and a fully intact head of a Chicken for lunch, someone played Bollywood music on the restaurants’ speakers and all of us were transported back to our homeland. Put a bunch of Indians together in any part of the world and they are bound to do 2 things for sure…Dance on Hindi songs and Eat Indian Food!

The resort where we stayed for the night was absolutely rustic. Wooden cottages surrounded by tall trees overlooking a muddy river was a nice surprise for everyone. Sitting at the deck of our cottage, sipping tea with Sanjay, Rina and Anurag, all of us acknowledged that how lucky we are to be able to experience this journey. We had just begun to get little philosophical talking about life and the journey on which we are together, when as if by cue, the weather turned and we got to witness the most deafening sound of lightening, ever. This was followed by heavy downpour, strong winds and a thunderstorm.

“This, now, here, is the beauty of the journey” I said. Sitting in the middle of a rain forest, in an unknown town witnessing nature put up a show for us where just a few minutes ago, we had no clue what we'll get to experience this evening. Carpe Diem! We embraced the moment and in that very moment, we knew that we will remember this day for a long time to come. It got etched in our memory forever!

Later, we joined the rest of the group for dinner at the main deck. The resort was managed by a local family and when some of the ladies in the group asked if they could cook some Indian food in their kitchen, the local family was more than happy to oblige. While Priyanka took the lead and showed her culinary talent, I got the chance to flaunt my sharp skills in pouring whiskey and ice into glasses!

Laos was a one day transit but this one day also left an everlasting impression on everyone. Laos teased us and left us wanting for more. I went to bed feeling happy about a day well spent but at the back of my mind was one and only one thing... China!

What can anyone write about China that has not already been said or written or seen or experienced or used! The entire world is looking east and it might just be fair to say that every single household in the entire world uses something that is Made in China. When there is already so much known and exposed about China, how could there be any curiosity or excitement to experience or even expect anything new from this country that is part of our daily lives now, right? Wrong. One line sums up China:

“Everyone is wrong about foreign countries”

As we crossed the Laos border and reached the China side, I was nervous. China was the most difficult border crossing on our journey and we had been working for a very long time going over the documents, the process, the procedures, the requirements again and again and again. Dealing with the local authorities, the army, the provincial governments and the motoring departments in China and getting all permits processed for 27 people was a complicated task.

“If we enter China successfully, we will reach London successfully” I used to say this to myself time and again. Entering China was a test for us and fortunately, we passed the test with flying colors. Andy, our local guide in China was waiting on the China side to welcome us. Our preparation over the last few months had paid off and everything worked like a breeze. We spent a few hours going through all the formalities and once we had the go ahead, Sanjay and I felt like a huge burden had been lifted off our shoulders.

“Convoy, Welcome to China” I announced on the radio.

How can I describe our China Odyssey during which we covered 5500 km over 17 days, traversing from Southern China to North Western most part of this massive country? Should I write about the states we drove through? Should I write about the food? The people? The places? The terrains? Should I write a daily log on what happened in a step by step orderly fashion? No matter what I write or how I write, I just cannot sum up in words the magic that China is. So instead of writing “this is how it happened”, I will describe China simply based on the images that are now left in my mind.

As we started driving into the country through Yunnan province, we reached Jinghong, our first night halt in China. As we entered the city, the sight of tall buildings covered in colorful neon lights welcomed us and the first impression was that even a small town not known to many people around the world was so well organized, clean and modern. We had just entered China and I don’t think that anybody in the group had too many expectations from the next 17 days. I guess that was a good thing because from next day onward, China started unfolding right in front of our windscreens. It was like a game of cricket where the batsman is entertaining the crowd by hitting fours and sixes and the crowd is getting more and more excited by the amazing performance.

The first thing that hit us was the infrastructure. As we started driving north, we were blown away by the futuristic highways, the sophisticated and modern tunnels, the never ending bridges, the thousands of pillars holding the tarmac above the valleys, the clever methods used to cut mountains to build straight roads and tunnels which would not slow you down, even when you are climbing up a steep hill.

“China made huge cuts in military spending 20 years ago and all the money saved was put into building the country” - Andy told us. The result was right in front of us. I have not seen a single country where every single road, be it a highway, a national road or a small street in a small town was so carefully planned. China knows what its doing! They are looking ahead towards the future, and has been looking ahead towards the future for a very long time and the results are out there for everyone to witness.

“Maybe, someday, America will have the infrastructure like China” I never thought I would make a statement like this.

As we continued driving through Yunnan province crossing the gorgeous rain forests and winding roads, I was hoping and praying that we are able to cross the fourth largest country in the world without any incident or mishap.

“As long as the people and the cars are fine, everything else is fine.” - Sanjay says this very often. We continued our journey north through Yunnan province and reached Kunming, the capital of Yunnan. A modern city, where we stayed only for a night and continued north towards Xichang. It is here that we got a chance to visit the “Earth Forest”, a unique location where we got to witness clay and sand formations created over millions of years where people of the Yuanmou tribe used to live. A road trip can make you see things and create memories that you cannot even think of as a tourist. On the road, you never know what is waiting for you at the next bend. It was the Police!

For the first time in China, we got stopped by the police for a “regular check”. Passports, Vehicle Registration, Driving License and Permits had to be presented to the police for carefully scrutiny. Over the next couple of weeks, this had become a regular practice.

“Police check post approaching, please be prepared with all your documents” this was a regular announcement on the radio. Our journey continued and before we reached Chengdu, the largest Chinese city on our expedition, we made a quick stop to check out the Giant Buddha Statue at Leshan, which is the largest stone statue of Buddha in a sitting position in the world. Honestly, I am not much of a “sightseeing guy”. For me, as long as I get to talk to people, make some silly conversations and share some laughs, I have experienced the country. Having said that, I must add that the sight of the massive statue carved out of a stone mountain was definitely very impressive! 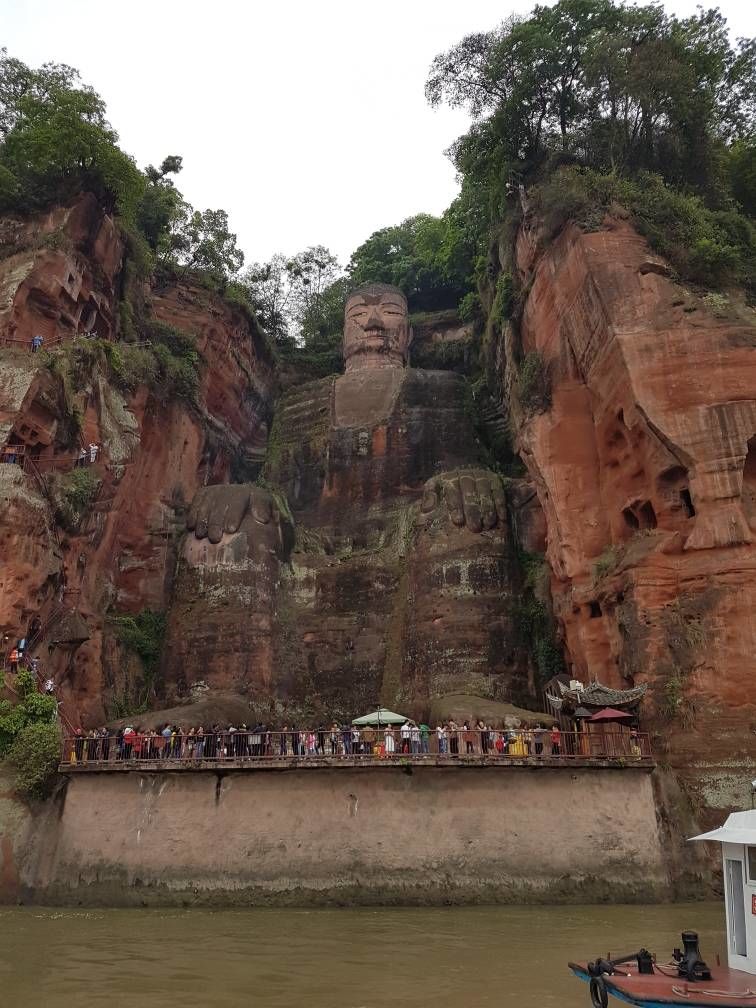 We reached Chengdu where we got to eat Indian Food, for the very first time since we started our drive from Imphal. There is something about your own food, isn’t it? Well, I didn’t missed it but when it was put in front of me, it made me smile. I was salivating and I relished every bite. Honestly, I may have overeaten a bit, but I definitely had a sound sleep that night!

The next morning we did what had to be done in Chengdu. If you go to New York, you will visit the Times Square, in London, you will visit the Tower of London, in Japan, you will ride a Bullet Train, I guess? But in Chengdu, you will go and say hello to the Pandas! The only image of Pandas that came to my mind was from the movie “Kung Fu Panda” but I have to say that when I saw the real ones in Chengdu, they looked exactly the same! Here is a fun fact, Chengdu is home to 80% worlds’ population of Pandas! (There are still more people than Pandas in Chengdu, in case you are wondering). 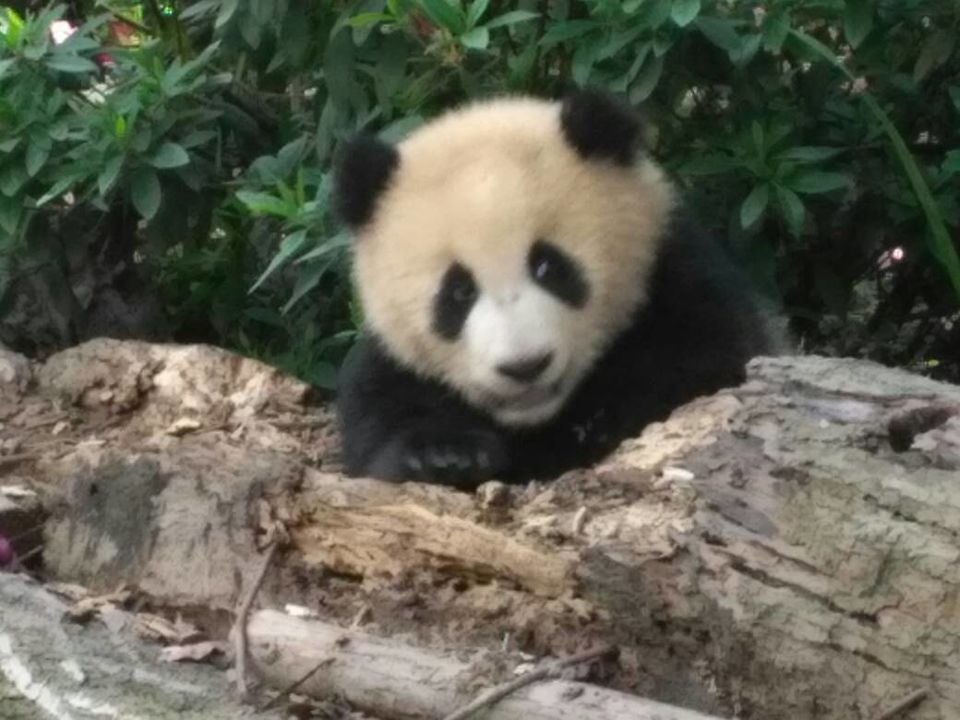 After playing with Pandas, we went to the road called the “Wide and Narrow Alley”, which is a world on its own. Walking down this lane, you can experience the history, the culture, the food, the art, the creativity, the dancing and everything that you ever heard about China! You can see snakes being cooked, creepy crawlies being boiled, rabbit heads hanging outside shops, snake venom beer being sold but at the same time, you can also see the dancing, the drumming, the costumes and my favorite, the Traditional Chinese Tea Ceremony. Some of us found our way into a Traditional Tea House where a gorgeous Lady made us sit around a table as she delicately prepared tea for us. She was dressed in a traditional Chinese gown and before she got down to making the tea, she applied lipstick on her lips, run her fingers over her hair, gave a teasing smile to us…she had all our attention. She handled the tea pot and the cups with such finesse as if she was a painter lifting his brush to create a piece of art. 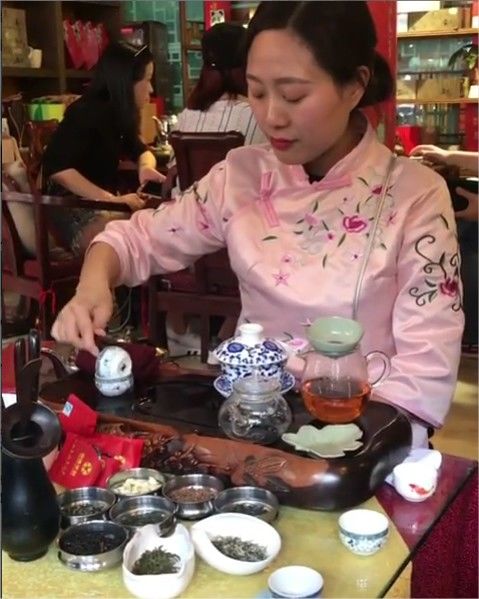 Our journey through China started on a high and as we drove further, it simply got better and better. I truly believe that a country can be fully experienced only if you open your heart, open your mind, open your arms and allow the country to embrace you. On this journey, every single person has allowed China to embrace them. The China Odyssey continues…