Deoghar Travel GuideDeoghar TripsThe Abode Of Shiva Which Is A Must Visit To Witness The Miracle!

The Abode of Shiva which is a must visit to witness the miracle!

The Maha Arti Ritual being performed by the pundits in the evening! 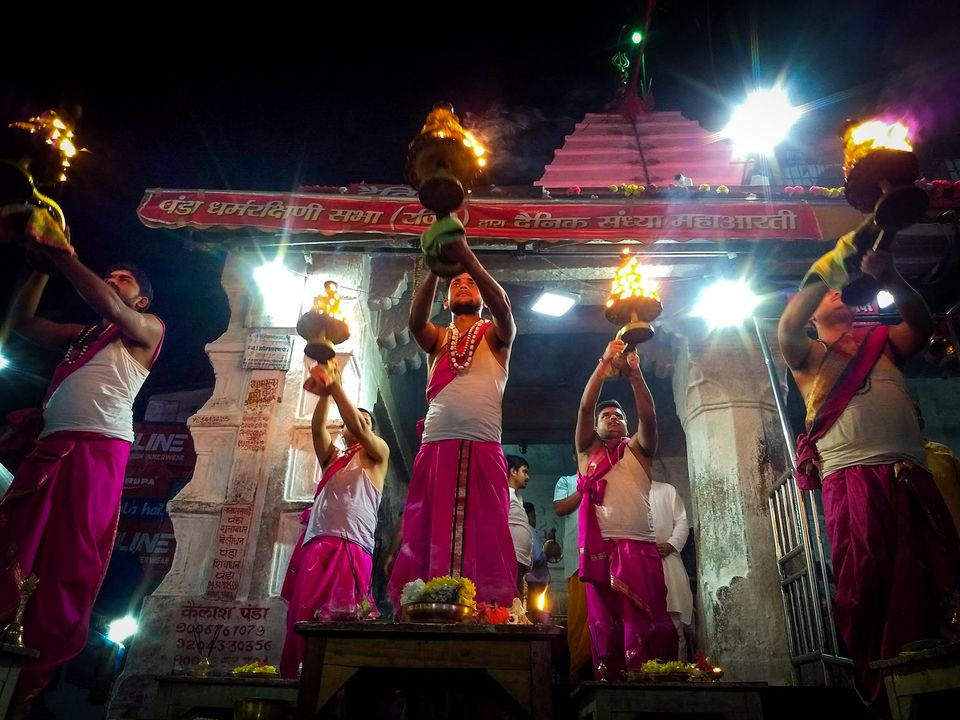 The Maha Arti at the premises of BABADHAM temple. 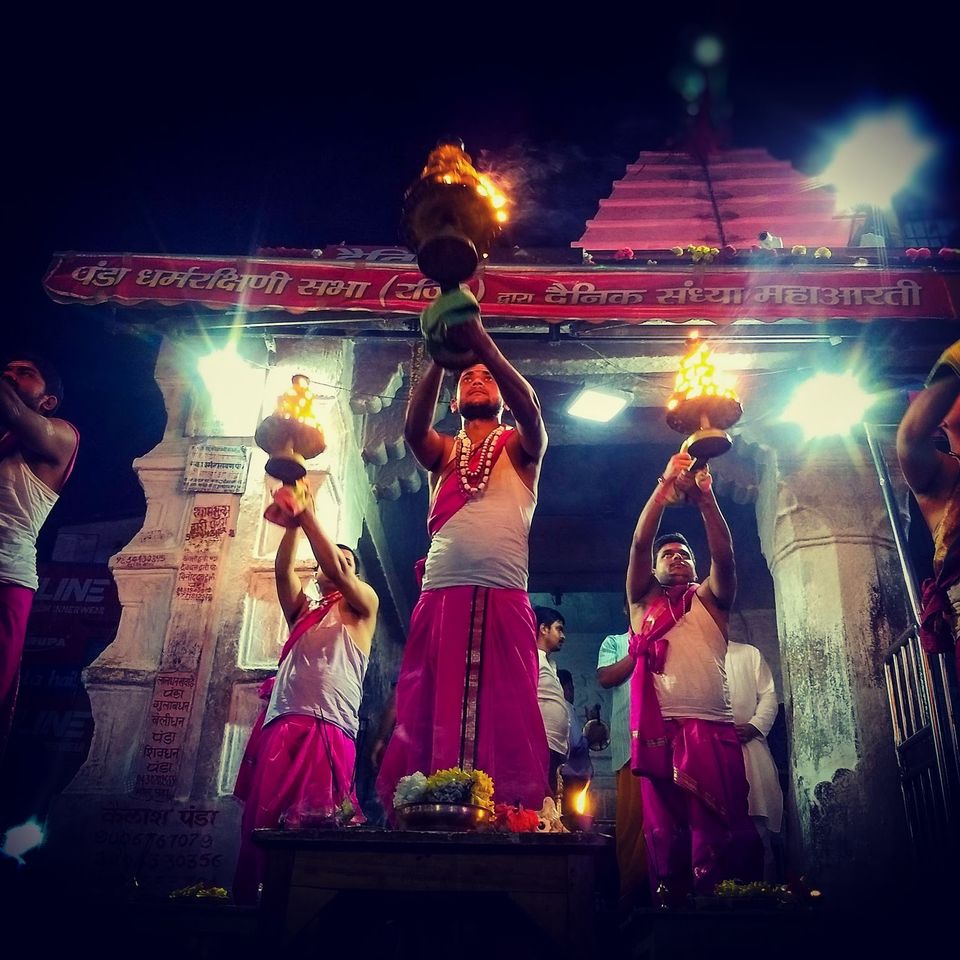 I was in a dilemma as to visit this religious temple or not over the weekend. I was actually going through a rough phase in life and hence, mom insisted that I should visit it and offer prayers to the Gods & Goddesses and seek their blessings.

So, I finally left home with my Mom on the Friday evening from Patna to board the 7:45 pm train to Jasidih Station. The ticket cost was a mere Rs 80 pp/-. We reached Jasidih station at around 1:20 am and then hired an auto-ricksaw to reach the main gate (VIP gate) of the BABADHAM temple, at Deoghar which is situated in Jharkhand. The auto wala bhaiya charged us Rs 120/- but was really nice to safely drop us to the hotel we were residing in.

We had our hotel booked at a walk-able distance from the main gate of the temple. I was literally so exhausted that I had no strength to be able to open my eyes at 6 am early in the morning to do the darshan of Lord Shiva and Maata Parvati and other deities. My mom however, made sure that we got up by 6 am, took bath and without eating anything left for the temple.

It was a Saturday Morning and we entered the dwaar of Lord Shiva for his darshan. OMG! was the word that I uttered upon seeing the crowd. It was too crowded and people were falling and getting hurt and some could not even get the darshan of Lord Shiva.

However, I was more concerned about my mom than myself ki wo acche se ganga jal and belpatra chadha le shiv ji pe and hence, I was trying to make way for her and pushing people aside whosoever was coming in our way. Luckily, both me and my mom were able to do the darshan of Lord Shiva! Wo kehte hai na, Jab Bhagwan ke yaha se bulawa aata toh sab mangalmay hota and that he doesn't let you leave the place being disheartened.

After, the successful Darshan of Lord Shiva, we headed for our darshan of Maata Parvati which again was too crowded but we managed to do the darshan and pour the holy Gangajal over Maa Parvati.

Apart from the temple of Lord Shiva and Maata Parvati, there are 20 other temples and the darshan of all the other 20 deities too must be completed. However, there isn't any crowd there and you can easily do the darshans . 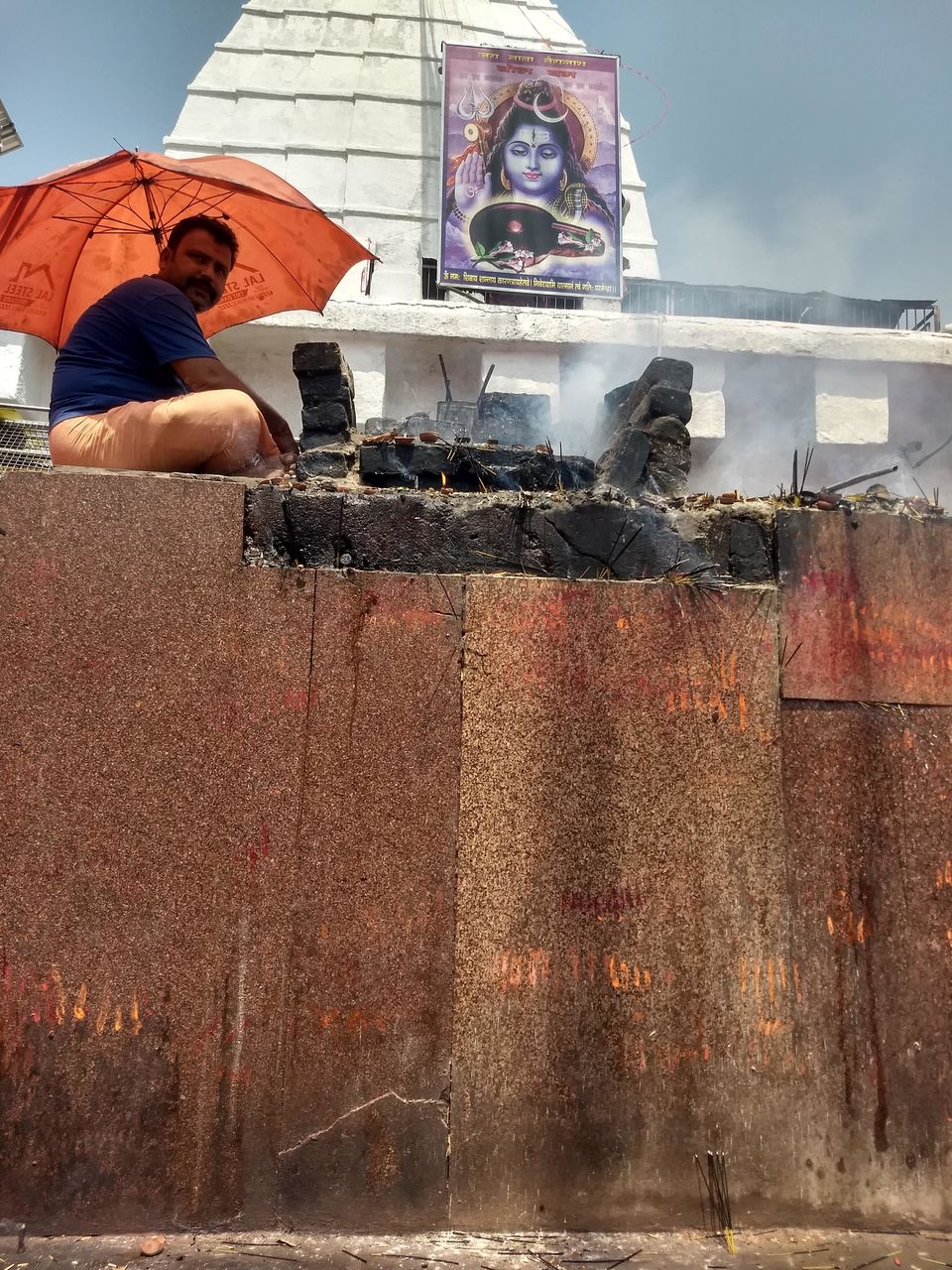 Deoghar as the name signifies is the abode of Gods. It is the only Jyotirlingas among the 12 which has the "Gathbandhan"of Lord Shiva and Maata Parvati and where both of them reside together to bless their devotees. People from all over the world come to seek his blessings for a happy married life and even tie a holy thread from the shikhara of the temple of Lord Shiva to the shikhara of Maa Parvati as a Gathbandhan. People come with full faith and offer their prayers to seek their blessings to get their wishes fulfilled. 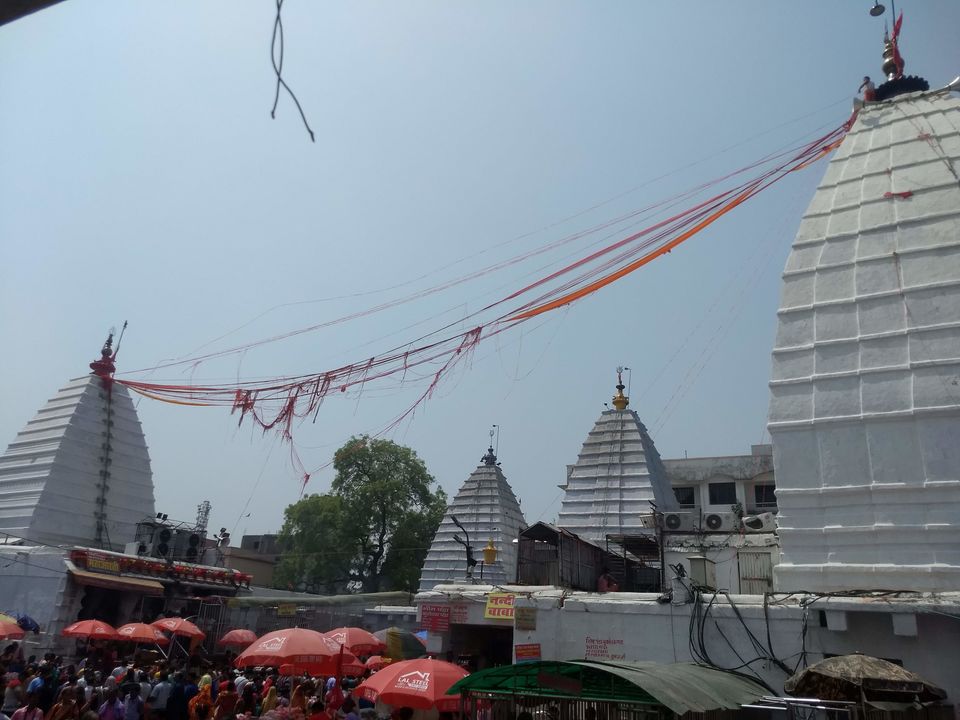 We then came back to the hotel after performing the puja done by the Pandits and rested for the rest of the day and left for the temple again by 5 pm only to see the "Shringaar of Lord Shiva" and witness the "Maha Aarti".

The Shringaar Puja being conducted by the Pandits who are assigned for the day. 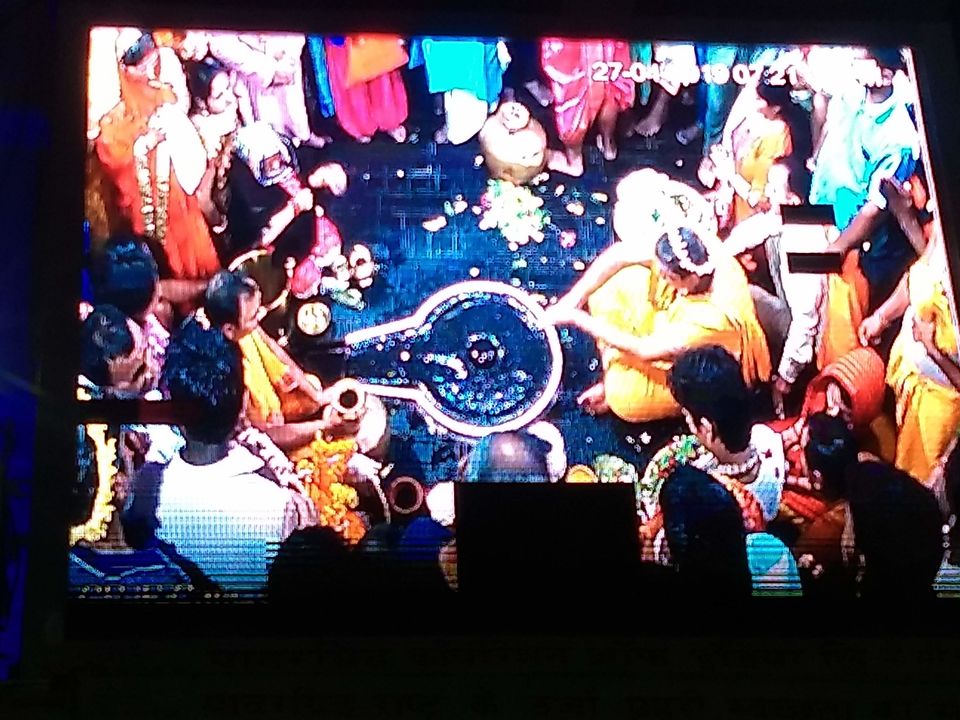 While witnessing the Shringaar Puja, make sure that your body doesn't touch the Maha Mukut which is placed on top of Lord Shiva after the entire process of Shringaar puja is done by these pundits who are assigned to offer the prayer and conduct the ritual of the Shringaar. Some people are even lucky to get chandan teeka on their forhead, perfumed cotton and handkerchiefs as a Prashad which are used in the ritual. If you get lucky, make sure you keep it safely and properly for your entire life.

After successfully witnessing the ritual and seeking the blessings of Lord Shiva, me and my mom stepped out of the premises of Lord Shiva temple to witness the Maha Arti which takes place from around 7:30 pm till 8:10 pm.

It is magical and the best Aarti that I have witnessed so far. It's so divine that you can feel the power and magic of it. You will be lost in the process and it would feel as if your entire body-mind and soul has reached the stage of divinity. What I truly felt, cant be expressed in words as I am literally falling short of words to describe it but the power of it that I experienced will be with me for life long!

The Maha Aarti at BabaDham Premises being performed by the Pandits in the evening. 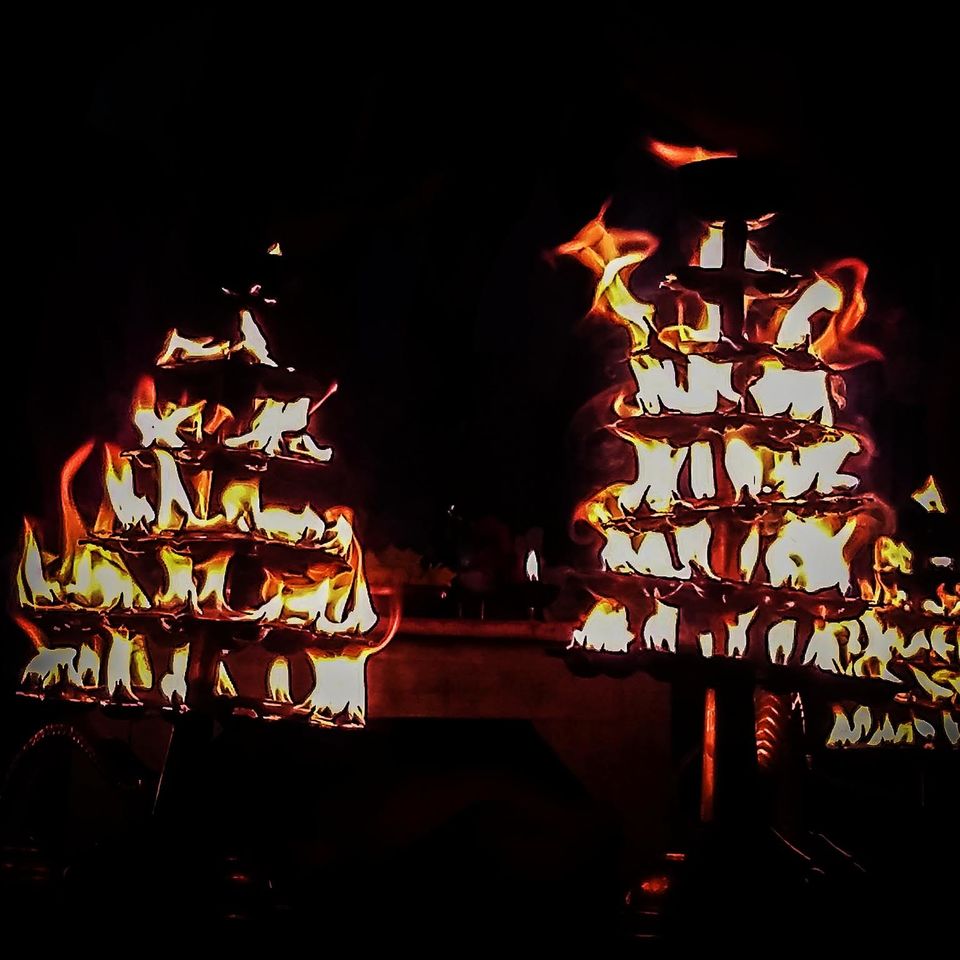 I could see the smile on my mom's face at having successfully witnessed all the rituals and I too felt very content and could feel the presence of Lord within me. It felt as though all the worries in my life would soon be gone and that good days and happy days were about to knock my door soon.

So, I would suggest all my readers, go there with a pure heart and complete faith- Trust in the Lord and miracles will happen. God always has better plans for you!

In the premises of BABADHAM temple- Devotees offer their prayers. 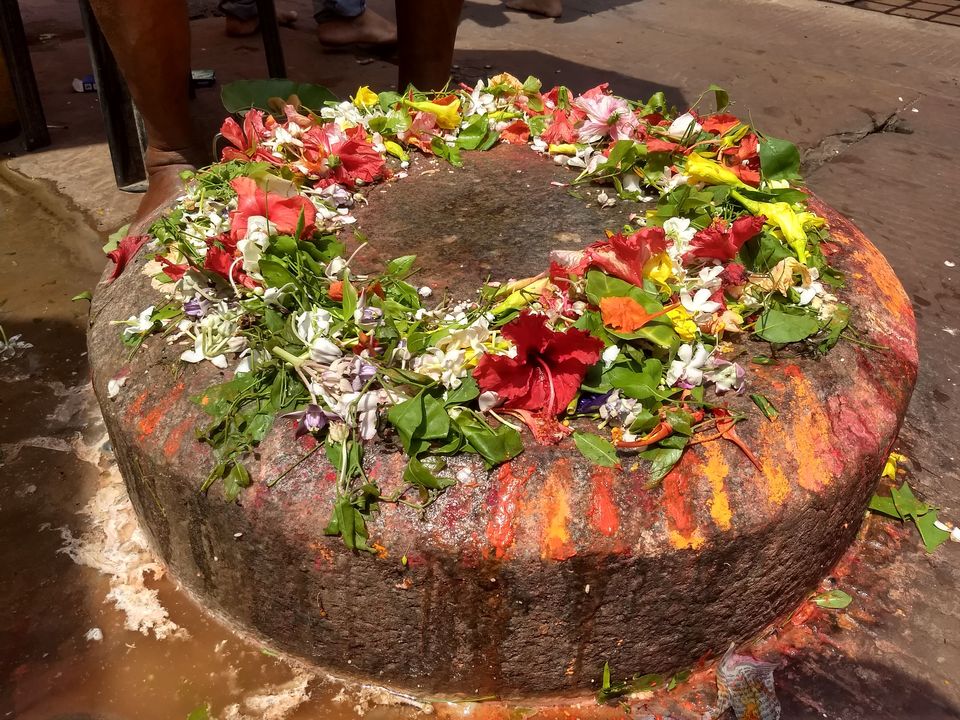 I would personally request all my readers to go and offer their prayers and seek the blessings of God and Goddesses and no matter how crowded the place is because it always will be- Himmat juta kar witness the Shringaar Puja and the MahaArti, you will definitely sense the divinity and magic and then I would be happy to read your comments about your experiences as well.