Boujee on a Budget - Carlton Downtown Hotel, Dubai- Our Stay 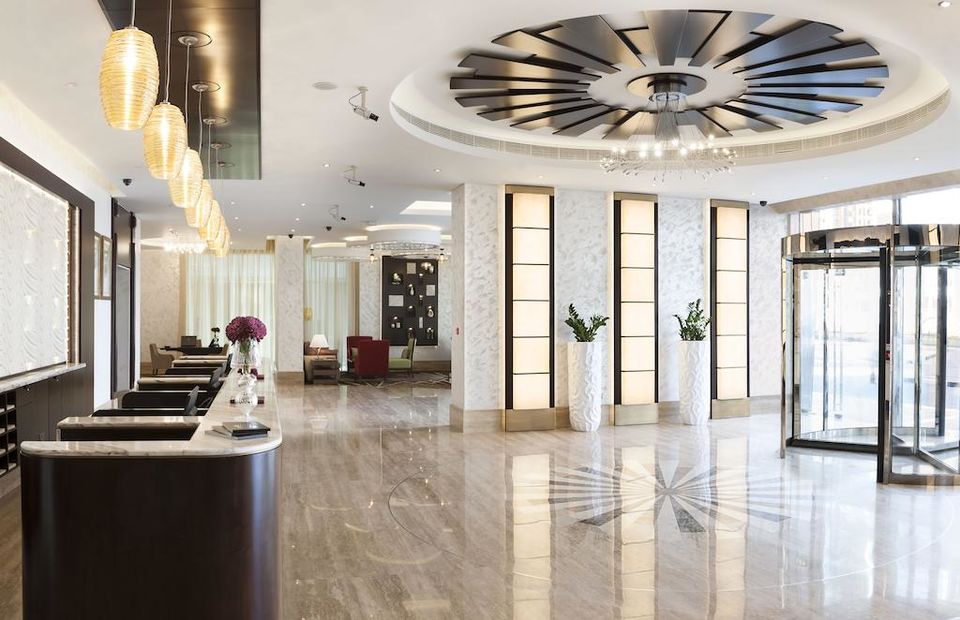 Dubai has become an almost imperative city to visit in any ambitious travellers' "must-see" catalogue and certainly a one-stop shop for wanderers alike. It doesn't help that the Emirates Airline covers most of the world and uses its home country as a transit point, so at one time or another, almost everyone everywhere will stop in Dubai, and ultimately get allured in by the luxurious gold and futuristic ambiance of the city.

It's the very hub of business and pleasure for the world and links the East with West seamlessly. For 72 hours, On the 19th November, 5 friends and I stopped over in Dubai on our way to Thailand and it was the first time I'd been back since 2012 - although then it was only a 15-hour transit with family. Does that even count?

I tend to travel for pleasure whenever I can, which admittedly isn't often due to workload and demand (that's changing this year :D), but I was in Dubai to enjoy what the city had to offer and grab a few things for family and friends. We stayed at the 4* Carlton Downtown on Sheikh Zayed Road, Deira in their twin Deluxe Room. I think they upgraded us in all honesty, the room was way too good to be just a Deluxe.

Built in 2013, the hotel is home to 357 rooms and suites and whole bunch of extra amenities, including dining and lifestyle venues, spa, fitness centre, tennis court, swimming pool and 23 fully equipped meeting rooms for conferences and events. Preeeeetty cool. Carlton offers a range of entertainment options including Jimmy Wickets Sports Bar & Lounge and Zephyr, the highest AL fresco rooftop lounge in Dubai. We opted for Breakfast included in our stay of course, because honestly, who wants to be looking for places to get decent breakfast first thing when you wake up in the morning.

Room 2112 is pretty high up, on the 27 th floor. The room had the most amazing views of the city's skyline and faced onto Sheikh Zayed road. It towers way above the building's opposite, so we got views of the Arabian Gulf in the distance. The room is slap bang in the middle of the suns path throughout the day and meant our rooms were constantly bathed with direct heat from the sun.

We, unapologetically and totally unmatched to the rooms below, got to soak up the breath-taking full views of sunrise and sunsets and crystal-clear azure blue skies. The views were fantastic. I'd booked it through a friend who like the Hyatt, had given us dirt cheap discounts on the room and had told them we were VIP, so the room was probably one of the best they had and rightly so, we were.

You'd think it would get pretty loud with the longest highway in Dubai so close, but being so high up with triple glazed, solar controlled windows means it's virtually sound proof from the outside world.

You don't hear much overhead noise, or horns, or the rush of the constant lengthy traffic that seems to be the cities norm. Check-in was smooth in the grand foyer; the receptionist was this mid height Arab/Iraqi/Moroccan young man, maybe mid 20's but honestly- and I mean this in a total good way - looking like he'd just hit puberty... a very youthful and welcoming smile.

He got us checked in swiftly, and Joseph - the Filipino bell boy (or rather, man), greeted us to take our bags up. If you visit, just ask for Joseph really. Like, I'll keep it that simple for you. His knowledge of the city, best places to avoid and the "cool kids' hangout" areas saved us a lot of time, and quite frankly we needed it. He was open, relatable and pretty prompt come to think of it. And he was never too far when we needed him.

My room didn't have an iron or ironing board, nor did the shower tap turn when I got in. Called Joseph and in no time, he was tugging away... I could've done it in all honesty, but I wanted to see him work his arm muscles real good. They bulged. A girl can dream ????

Our room was ready by 11. No lie, the most spacious hotel rooms I've ever been in. hands down. We were given a whole 42 sqm of land to live on, and as if that wasn't enough, we had a work desk and wardrobes, with at least 5/6 small cabinets dotted around for storage and off-loading, and even a couch. We had enough room in there to fit at least 10 adults with luggage comfortably sleeping on the floor, or if you had a little class, perhaps a solid 5 people comfortably in the space for 2 they'd given us. It was amazing. The interiors combine sleek, modern décor with everyday functionality, highlighted by airy finishes and humongous landscape windows. You know them royal houses you see in movies, where even Peter Crouch couldn't touch the ceilings if he stepped on the bed, this room was the same. The windows are very nearly floor to ceiling, except for a knee-high window seat that overlooks the city. We made good use of this, often spending every waking minute in the rooms perched on here. Whether we were watching the city whizzing beneath us, or having karaoke sessions screaming to our hearts content at the skies or watching the world in silence as night fades into darkness, it served more than its purpose for us. 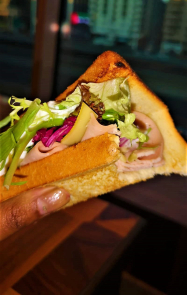 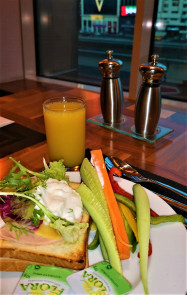 Breakfast is served in the Baÿty restaurant on the 3 rd floor of the building, between 6AM and 10AM. The buffet-style food served hails from both authentic Arabian and international cuisine and quite frankly, has everything your heart desires.

You want traditional English toast and beans? Here you go. French Toast with dripping syrup but your weird and add avocados to yours too? Here you go, take it. Fresh fruits? Here. Or a full-on Egg Fried Rice with Mushrooms, Sweet potato and Shrimp? They had a whole section for you too, boo. Safe to say most of us got a second round every morning. The staff are accommodating, chefs are at every station's kitchen to keep food piping hot or readily stocked. 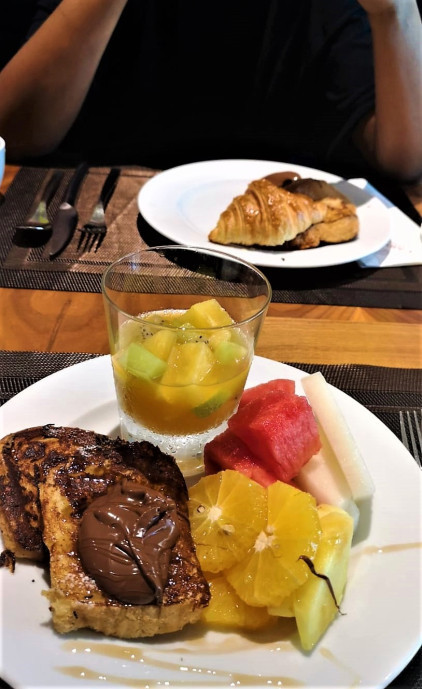 My French toast was a rock to my disappointment, it had been sitting under the heat for too long. I only realised after I had sat down, wiped down the cutlery and put the napkin on my lap. Super frustrating. I opted for Nutella and fresh toast but when your hearts set on something... the disappointment doesn't go away.

Everything else was good though- the fruit stored in ice, the beans piping hot, the juices a variety. We missed the special theme night dinner buffets though, featuring live cooking stations with orders prepared to my specifications.

Thursdays are Seafood nights, with fresh lobster, crabs, oysters and even tiger shrimp cooked right infront of you.

Fridays are Surf and Turf nights and for the steaks, and lambs and chickens and lobsters and high rollers and big spenders. My type of people. Your looking at roughly £30-£50 per meal on one of these nights... but you can get it sent to your room or onto the rooftop terrace and enjoy a meal on the 47th floor of the building instead. 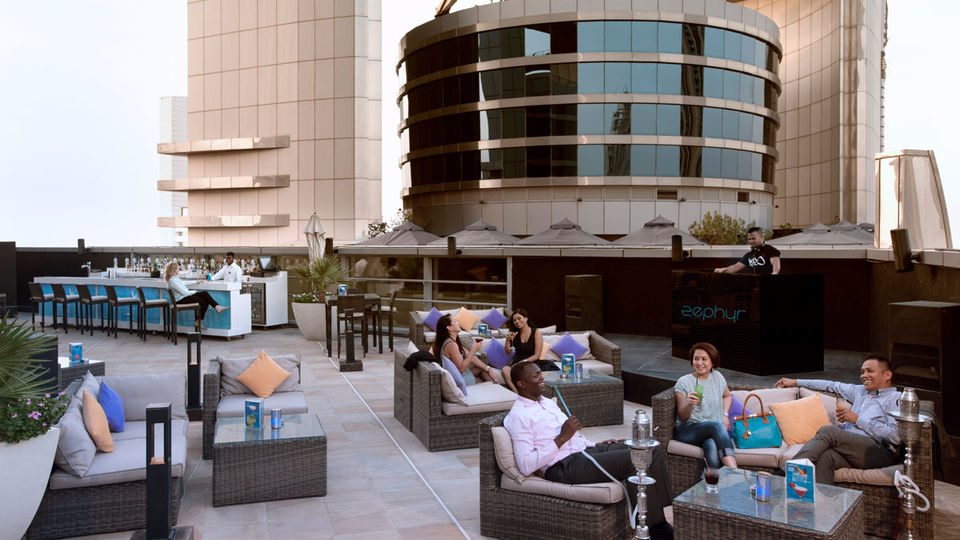 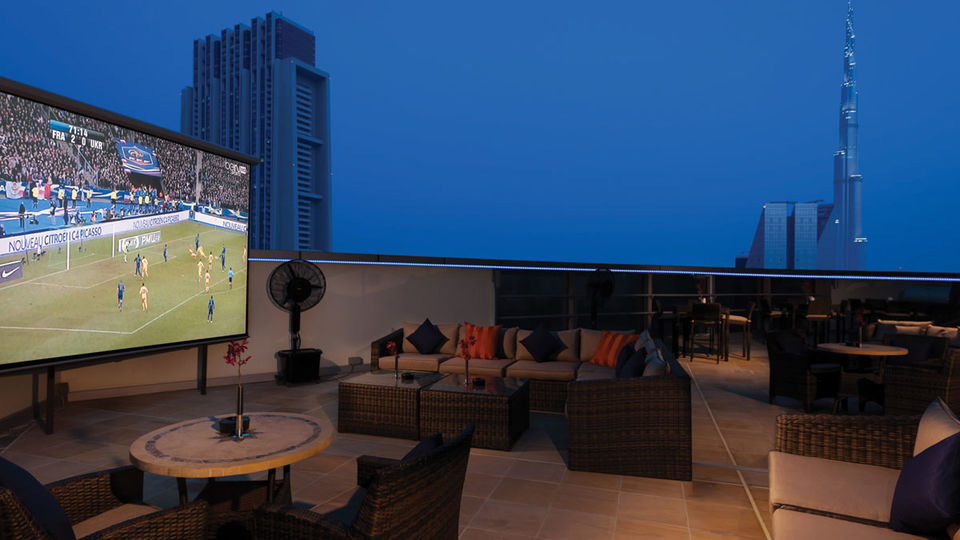 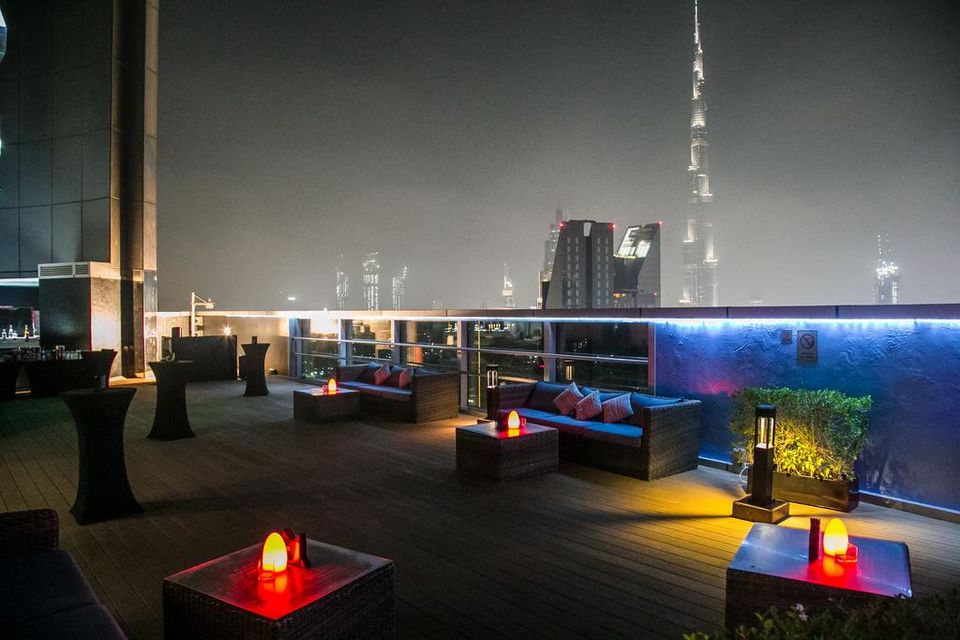 Probably my second favourite place in the whole hotel was the Zephyr Rooftop lounge and swimming pool. It is one of Dubai's highest outdoor restaurant and lounge, playing chilled house music and donning stunning views of Dubai and the Burj Khalifa.

We'd spend most times between activities lounging in the sun here, in the pool or grabbing some downtime before bed. It's a well-known fact now that I can't swim (yet), so I kind of bobbed up and down in the water for a few hours at a time.

At one point, I looked up and could've sworn the sky looked like something out of a cartoon... one of those road runner episodes in the desert with scorching heat and a dry, baked earth. It was hot.

My favourite place ever though, has to be the Citrus Spa- a female's health & leisure facility with Jacuzzi, steam room and spa facilities. I mean, when on earth do i ever get time to go and delight in the pleasure of a whole Jacuzzi?!

I'm telling you, this stuff is the beez kneez. It's the real shizzle.

I regret not spending a lot of time up there, but it's on the 45th floor of the building and open daily 10am to 10pm. My friend surprised me with some treatments, and I opted for a Deep Tissue massage and a full body scrub. Came out feeling like a whole new slippery woman.

Shamefully, at my big age, it was also the first time I'd ever been to a spa that didn't involve my siblings practising their skills on me, so admittedly, my scope of comparison is limited. It was amazing.

KFC is a few doors down, so snacks weren't too hard to get ahold of. Dubai International (DXB) airport is 12.3km away, a short 7-minute drive. The closest metro station is the financial centre station which is within view of the hotel, a mere 0.3km away and the property allows for a free shuttle service to the beach and shopping centre as well as the airport.

The hotel forever has a swarm of valet parking attendants outside the hotel, opening taxi doors for you and greeting you upon arrival, and are super useful should you decide to rent out a vehicle during your stay.

The hotel check-in time starts at 2PM and ends at 3AM and check out time is at noon.

One thing we should've known really but totally forgot what that they require a deposit on the room (incidental charges) when you arrive. Before you even go upstairs, they'll require you pay 500 AED for anything used or taken from the room. A little frustrating, since we'll only get the AED back once we check out and then they'll be no point spending it on our way out... but we negotiated he take £100 GBP instead from us, roughly translating to 468 AED. Close enough. We could then at least have the GBP safe during our stay and use it for later.

Tourism fees are of course charged as well, which they later just took out from the room deposit. The city imposes a fee of 15 AED (£3.25) per night- a total of 45 AED for us, translating to £9.65 in total.

The location, rooms and service at this hotel was fantastic. The rooms stayed clean 24/7 and it was definitely great value for money. The facilities available to you are abundant in number, and if you ever find yourself bored in your room... you don't search far to find something to do- something I rarely see in hotels.

The food was a little disappointment, but perhaps a slight one-time oversight and not regular for their chefs. The interior of the building synchronises with Dubai's famous gold motifs and makes you feel boujee on a budget. I'd recommend this hotel over and over, make sure you at least spend a night here to get a taste of Dubai.