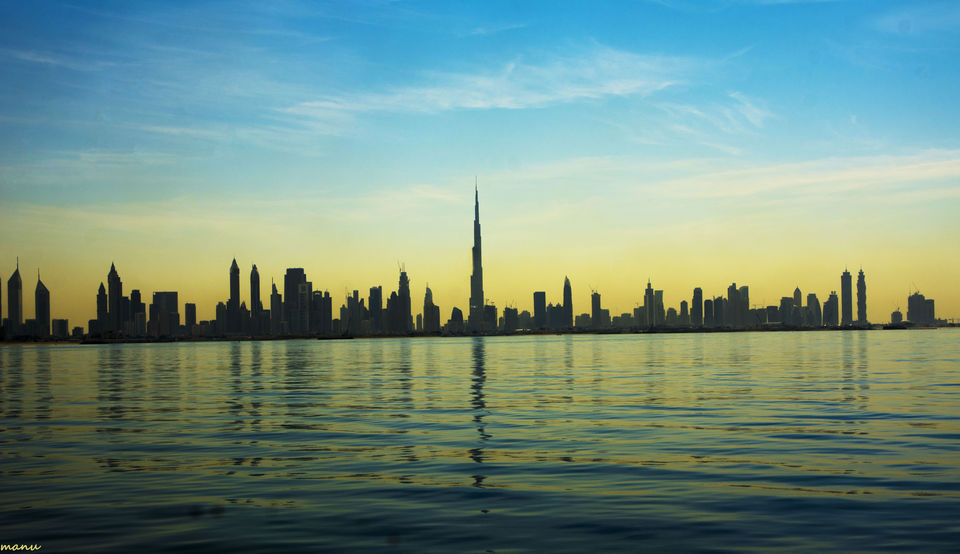 If your next-door neighbour’s overachieving child was a city; they would be Dubai, in the best way. This opulent oasis in the Arabian Desert is situated on the shores of the Persian Gulf. Dubai always strives to build the best, biggest and most luxurious; obtaining records of the tallest building in the world, the tallest hotel in the world, the highest restaurant in the world, and the largest shopping mall in the world. While basking in all its swanky glory, the city also holds its heritage in high regard, reminding you that you are still in the vibrant Middle East.

Dubai is one of those destinations that people choose for spontaneous trips, owing to the exhilarating nature of the city’s activities. So, pack your bags for a thrilling 48-hours through Arabia’s City of Gold!

Getting in and around

Dubai International Airport is the international hub for the city, which connects Dubai to wherever you are in the world. Dubai has great road infrastructure, and most tourists use the cream-coloured taxis to get around. However, traffic is an issue in Dubai, and it is a task to hail a taxi during rush hours. The other efficient option to get around the city is the Dubai Metro, which runs across the coastline connecting all the major localities. The bus system is efficient too.

As Dubai is in the desert, it really only experiences warm-hot weather. Thus, the winter months between November and mid-March are the best times to go with temperatures going down to around 15°C in the night, although it is the peak season and is, thus, most crowded. The rest of the year, temperatures can soar up to anywhere between 37°C and 40°C.

Let’s start at the very beginning

Dubai wasn’t always the ultramodern metropolis it is today. In fact, it had humble beginnings, which makes its development even more commendable. The Dubai Museum is a brilliant display of this transformation of the city; presenting to visitors a look into the life and culture of the emirate before it struck oil. Coincidentally, the museum is situated inside the striking Al Fahidi Fort, which is the oldest standing structure in Dubai!

Cost: AED 3 for adults and AED 1 for children under 6 years

Accessibility: Al Fahidi Metro Station is a 10-minute walk away

A preserved piece of history

Al Bastakiya is a district in Dubai that is more than 120 years old. A success story of its own, this quaint neighbourhood was to be demolished for a modern complex to be built in its place. While half of the demolition was executed, due to campaigns and pleas by architects, locals and even Prince Charles; the demolition was cancelled, and the municipality even restored the entire region. The narrow lanes are full of pretty shops and galleries. It will make you forget that the tallest building in the world is in the same city!

Souks are the heart and soul of the Arab shopping experience, no matter how many gigantic malls pop up. Also known as the Old Souk, this market in Bur Dubai is lined with shops displaying fabrics, cloths, readymade apparel, home décor, shoes, and so much more. Make sure to haggle to get the best price!

The spicy souk beyond the water

Across the Dubai Creek in Deira, the entrance to the Dubai Spice Souk is an unmissable wooden structure opposite the street from the ferry station on the waterside. A waft of various tingling aromas will hit you, and once you enter the narrow streets you will be able to view its source. Bottles and bags of spices, herbs, dry fruits, oils, and incense in all directions. Your haggling skills need to be even more on point here than the previous souk, because shopkeepers tend to quote very high prices to tourists.

Accessibility: From the Textile Souk, a 350m/5-minute walk to the Bur Dubai Abra Station, and purchase a ticket for AED 1 for a breezy abra (traditional boat) ride across the creek to the Deira Old Souk Abra Station. The Spice Souk is across the road from here.

The souk that gives the city its nickname

Adjacent to the Spice Souk lies the Dubai Gold Souk, which holds thousands of kilogrammes of gold and jewellery in it at any given time of the day, all for you to purchase! Dubai is known for its gold trade, and this is one place you can get in on it. Even if you don’t plan on purchasing anything, walking through the sheer amount of glittering gold is an experience in itself. Like all souks, it’s definitely a bustling market with shopkeepers calling you into their shops from all directions. In typical Dubai fashion, don’t miss seeing the world’s largest ring here!

Accessibility: Adjoining the Spice Souk, anyone would give you directions to the Gold Souk.

With rows of tables laid outside the restaurant, and the large red signboard; this place in Al Muraqqabat can’t be missed. What you get are some absolutely mouth-watering, authentic Lebanese, Syrian and Levantine delights. Their Beiruti hummus, mixed grill, cheese manakeesh, arayees, and the fatteh are dishes you must try!

Cost: A sumptuous meal for 2 should cost you roughly AED 100.

Accessibility: A taxi from the Gold Souk should cost you around AED 18. Alternatively, you could walk to Al Ras Metro Station (7 minutes), take a metro to Salah Al Din (AED 2.50 per ticket), and then a 5-minute walk to the restaurant.

The dunes await you!

You will be picked up from a location of your choice (your accommodation) at 3:00 pm and whisked off into the Arabian Desert. The ride to the desert camp is an exhilarating one of dune bashing, as your SUV jumps up and down the sand dunes.

At the camp, you are welcomed in traditional Arabian style, followed by activities like camel rides, sand boarding, tanoura show, fire show, belly dancing show, henna painting, and then a buffet barbeque dinner. See the sun set over the undulating desert terrain, from the comfort of Arabian carpets and cushions at the campsite. You will be dropped off back to your accommodation at around 9:30 pm, after a true Emirati-style adventure!

Six days a week, The Sheikh Mohammed Centre for Cultural Understanding organises tours of the Grand Jumeirah Mosque. Arrive at the main entrance of this gorgeous sandy-white mosque by about 9:45 am. You will then be escorted around the mosque for 75 minutes by a learned guide, and will gain knowledge about the mosque, an overview of Islam, and its traditions. Even holding a Q&A session after the tour, it is genuinely a very unbiased and open form of exposure to the religion and culture. The tour also includes tea, kahwah, water, dates and traditional pastries. Note, it is preferred to be dressed appropriately and modestly; ladies wearing fully-covering clothes, and men wearing clothes covering the knees. However, the mosque does provide robes and hijabs free of charge; on a first come, first served basis.

Days open: Every day but Friday.

Take a couple of hours off, but don’t forget the sunscreen!

Head to the Jumeirah Beach Residence (JBR) for a stroll down The Walk: a cobblestone road with skyscrapers on one side, and beachside buildings on the other, with a whole slew of hotels, shops, restaurants, cafés, street art, and stalls. You can make your way to the Marina Beach and take a dip in the crystal blue waters of the Persian Gulf, only to turn around and see a towering skyline behind you.

Grab lunch at one of the many eating options at the Marina. Five Guys, BurgerFuel, Tim Hortons, and The Brass (apart from McDonalds, Pizza Hut, KFC, and Subway) are some great budget options around AED 100 for two. But don’t stuff yourself up too much; an exciting adventure awaits!

Things to carry: Backpack with swim wear, cap/hat, towel, a change of clothes, sunscreen, and a bottle of water.

Accessibility: A taxi from Jumeirah Mosque should cost you approximately AED 55. You could also take bus number 8 (in the direction of Ibn Battuta Metro Bus Station) from Jumeirah Grand Masjid bus stop (9-minute walk from the mosque) and get off at Jumeirah Beach Residence Station 2, Seaside.

Are you ready for the Leap of Faith?

A part of the Atlantis, The Palm; the luxury resort hotel situated on the furthermost tip of the iconic Palm Jumeirah, this waterpark is one of the best in the world and the largest in the Middle East. With attractions like the world’s largest waterslide, a slide that is 9 storeys tall, or another where the ground is literally pulled from under your feet sending you vertically down at 60 kmph; this place is for the adrenaline junkies and those who want to put their fears to the test! Or, well, you could also float the day away on the 2-kilometre lazy river. There are also paid packaged where one can swim with dolphins, sea-lions, or dive in an aquarium!

Accessibility: A taxi from Dubai Marina should cost you roughly AED 30.

At The Top of the world

Finally, make your way to what is probably the most iconic building of Dubai; the Burj Khalifa. With it being the tallest building in the world and all, the Burj Khalifa has some of the fastest elevators in the world. To get to the 124th and 125th floor observation deck ‘At The Top’ (the highest in the world), you will hear your ears pop with the elevator travelling at 10 m/s, reaching the 125th floor in just about 60 seconds. The indoor 125th floor observation deck gives you 360º views, and then you climb down to the 124th floor deck which has a 180º open air viewing deck! For a higher-priced ticket, you can even visit ‘At The Top SKY’ which is on the 148th floor. We recommend that you book a slot just before sunset, and then you can stay for as long as you like to get a view of the city by day and night. It sure is one for the bucket list!

Accessibility: A taxi from Aquaventure Waterpark should cost you approximately AED 50.

Friends and family of shopaholics; beware.

Located at the base of the Burj Khalifa, the Dubai Mall is the largest shopping mall in the world, sprawling with a total retail floorspace of 5,400,000 square feet. It’s safe to say that a shopping spree here would cost you more than your trip. With more than 1300 shops and services including an aquarium, indoor theme park, and a 22-screen cinema; you could spend hours at end here. Fun fact: The mall has the world’s largest candy shop ‘Candylicious’. It spans 10,000 square feet.

You have 200 restaurants available to choose from for your dinner here. From well-known restaurant chains like The Cheesecake Factory, P. F. Chang’s, TGI Fridays, Texas Roadhouse, Chili’s, Rainforest Café, California Pizza Kitchen, Wagamama’s; to more local joints like Al Hallab, Parker’s, Huqqa, Somewhere; and of course, more fast-food franchises than you can imagine- you have a variety of cuisines and price points to make your choice! But make a good one, because this meal will be the last before your Dubai journey comes to an end.

Accessibility: The entry and exit points of the Burj Khalifa are through the Dubai Mall itself.

You are definitely not going to forget the 2 days that you spent in one of the most extravagant cities in the world. A city that took you from the shores of the Gulf to the most dizzying heights, not to forget the engaging cultural experiences that the people of Dubai are so proud to share. So, when are you planning to be greeted with Dubai’s welcoming marhaba?