Egypt Travel GuideEgypt TripsEgypt - Not Just A Trip, It'S Like Traveling Back In Time. #Travelwithvidushi

Egypt - Not just a trip, it's like traveling back in time. #travelwithvidushi 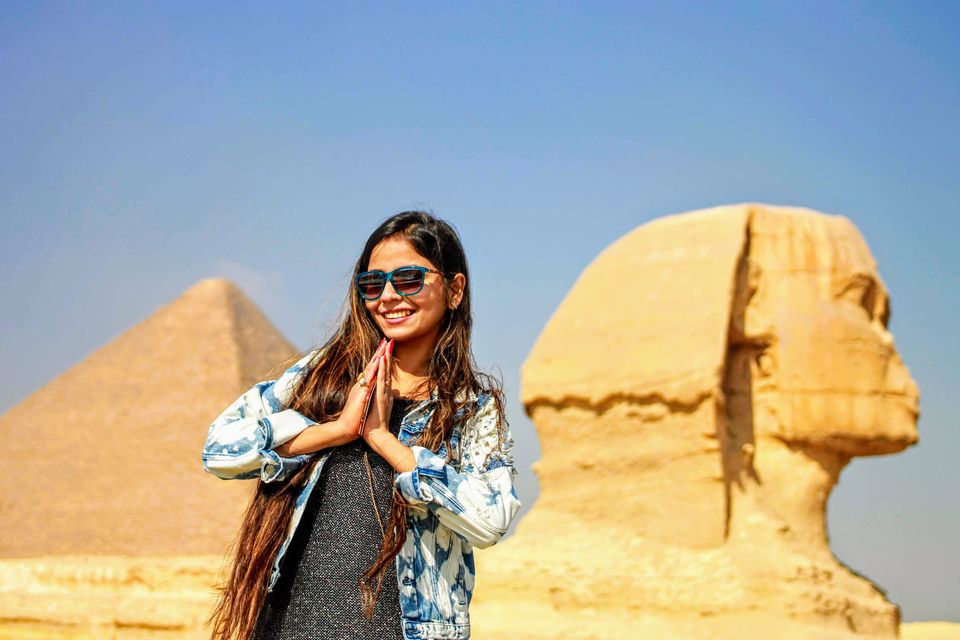 Ever since my childhood, I had the desire to visit the land of Pharaohs and Pyramids and that's why I finalized Egypt for my year-end vacation in December 2017. Since my school time I heard, read and viewed so much about Egypt that I was on the seventh sky due to the excitement of this trip

As you know Egypt is a desert in South Africa and summers are extremely hot there so I kept this trip in December intentionally. It took around a week to book flights, prepare itinerary, book hotels, internal flights/train and to apply for Visa and I did all these in 2 months advance. Being a solo traveler I prefer to plan my trips in advance to avoid last minute hassle, this also gives me enough time to gather information about the geography, culture, transportation customs etc.

After waiting for two months finally, that day arrived (25, Dec 2017) when I took my flight to Cairo International Airport from Indira Gandhi International Airport from Delhi. It took approx. 9:30 minutes to reach there with a connecting flight via Muscat International Airport. After clearing the immigration process, I took the cab to my hotel that was in Giza Governorate. For all those planning a trip to Egypt, I must tell you traffic in Egypt is crazy, luckily my driver was extremely helpful and he used some shortcuts still it took over 2 hours for a 40 KM ride, but Arabic music, city view, and the first glimpse of the Nile river made my first day. Finally, I reached my hotel it was just in front of the Giza Pyramids.

Day 2: Great Pyramid of Giza and The Banks of Nile River

Post breakfast I headed towards the Giza complex which was at a very short distance from my Hotel. Due to the recent terror attacks, the entire complex remains heavily guarded round the year, you will find armed personnel at every 10 meters.

Then I bought a ticket moved toward one of the seven wonders of the world, I don't have an exact word to describe the first view of the grand Pyramids, it was huge and it was shining like a jewel in sunlight. While watching this marvelous ancient architecture I met with a local guide there, he told there are total 9 Pyramids in that complex. He also told me some amazing facts about the Pyramids and Cairo. I took a camel ride around the complex and headed towards the Sphinx which is the same complex. Sphinx is an ancient mythological character, you'll find Sphinx's statues in most of the temples of Egypt but Sphinx at Giza is biggest and most famous. After clicking several photographs I left Giza complex and went back to the hotel.

After a delicious Egyptian lunch, a cup of Egyptian tea and a short break I headed towards the Nile Corniche to enjoy my evening overlooking the Nile. There I found a restaurant inside a beautiful old cruise that was docked at the bank, I tried their specialty apple flavored shisha while enjoying the breathtaking sunset and it was a great experience.

This was my third and last day in Cairo, early morning after breakfast I took a cab towards the Egyptian museum. After reaching there I met with a local guide who was the professor of history as well, I've been to several museums but Cairo's Museum was completely different. It was like traveling through time, several antiquities, artifacts, and statues were telling only one thing that how huge the entire Egyptian empire was. Luckily I got a fantastic guide who was a great storyteller, he told several untold facts about the Egyptian Empire, Pharaohs and some of their unique rituals. He explained the entire mummification process in great detail as well. In the end, I reached to the Royal Mummies Hall, yes the real mummies of the royal Egyptian family. It was scary and exciting at same time. I saw mummies of several famous kings about whom I had only read in books. After visiting all the halls I was super hungry so, I went to the nearest Indian restaurant in the same area.

By the time I had lunch It was prayer time, I took a taxi for one of the most famous souk (market) of Cairo "Khan Al-Khalili", I could hear the sound of Namaz in almost each of the streets I was passing through. When I reached to the market I felt for a minute I am somewhere back in time. This souk is an old styled open-air market, it is a mix of several colorful small lanes, exotic antique items, perfumes, spices, colorful glass decoratives and different varieties of shisha. I found some great souvenirs to bring back home there also, met some fantastic people there and came to know how famous Amitabh Bachan is there.

This was my last day at Cairo, next day I flew to Luxor to visit Karnak Temple, Luxor Temple, Valley of King and Queen and to take hot air balloon ride. Read my next travelogue to know my experiences in Luxor and to know how Egyptian revolution changed the entire tourism industry.

Egypt is a beautiful country once you reach there than you realize how amazing it is, it must be in your travel bucket list for its ancient history, rich culture and nice people. Views of Pyramids, felucca ride on Nile river, hot air balloon ride over the valley of kings, entry to the tomb of Tutankhamun, listening mummification process story, and Luxor to Aswan Nile cruise each of these are must do experiences. And yes you should not forget to try the Egyptian tea with mint...