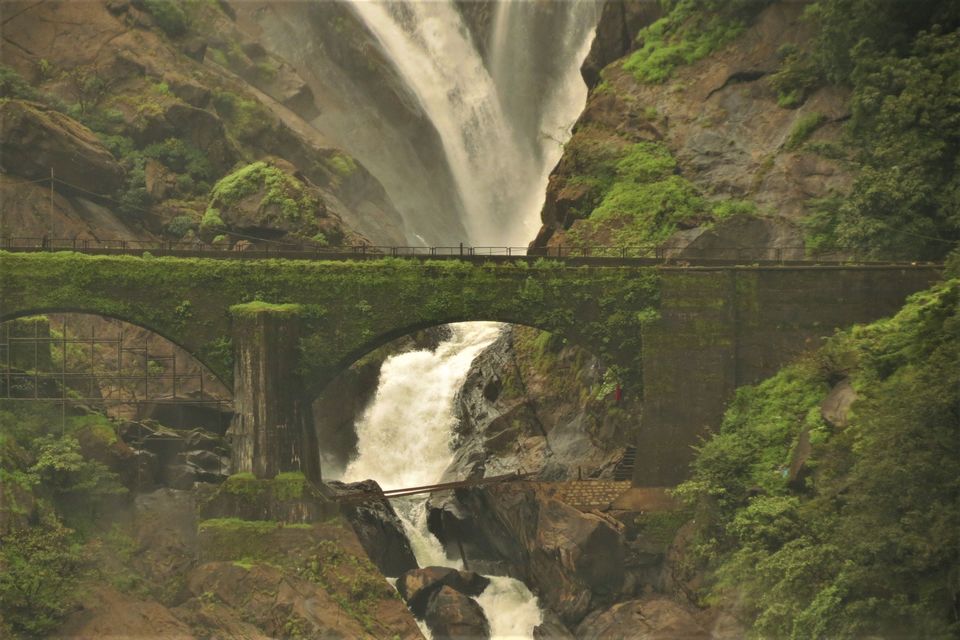 Call of the Wild :

As the sun went down between the rocky outcrops at the end of Palolem beach, I made an important decision. I would trek to Dudhsagar falls next morning. These elusive falls lie hidden right in the bosom of Bhagwan Mahavir sanctuary. The enormous canopy of clouds that had been haunting the skies the whole day was steadily fracturing. I would start at 8 am and reach Kulem station, then follow the railway track to the front of falls. It would take me 12-13 Kilometers and approx. 3 hours hike one way. If I get lucky I would hitchhike on a train or bike on the way back. I rubbed my hands in glee. What a simple plan!

I parked my Activa outside Kulem station at around 1000 hrs. Since it was a long walk to falls, I got a bun maska with some pakoras packed from a roadside kiosk and thrust them deep down in my knapsack. It was already loaded with a camera, poncho, a small torch and lots of optimism. In no time I found myself on the lonesome railway track bathed in a vaporous mist.

It grew quieter and quieter as I progressed and other passersby became very infrequent. Dense foliage surrounded the track and the stillness was only broken by shrill cry of a treepie or single note calls of a barbet. A curious orchestra of unknown insects also filled the jungle with their strange chirping. Every time they reached their crescendo, they sent my pulse racing. Never before I had heard such a thing. Whatever it was, it made the jungle alive all of a sudden. In all probability it was a bunch of nervous crickets. Sun light slanted through opening in canopies and illuminated translucent butterflies which floated daintily in the thick monsoon air. It is said that butterflies are indicators of a healthy ecosystem. And ecology of Bhagwan Mahavir sanctuary is very healthy going by their numbers.

I met two boys from Vasco coming back from the falls. They told me to get down through a clearing in bushes and follow the mud track which runs along the river. "You would have to get down somewhere. They won't allow to walk on the track beyond Sonalim station. It is forbidden. Also the ballast on the track will tire you quickly and tear your shoes”, one of them said demonstrating his ripped soles.

And so I took the mud track along the Dudhsagar which runs through the sanctuary. I was never too far from the drowsy murmur of the jungle river. There were giant earthworms the size of my Quechua shoe. Beams of sunlight made captivating reflections in the muddles and played tricks with my mind. Large centipedes lay curled up in tight spirals, creepers ran up and down mossy trunks and streams overran bridges and tracks. They filled up my senses like one John Denver song. The forest had cast its spell upon me.

A clearing in the vegetation, gave me first glimpse of Dudhsagar falls. It did not look as full of water as I had seen in some of its postcard pictures. Actually it was far from it or maybe the waterfall was too far. A board pointed at the way to the falls, but I could only see a flowing river. Since the water was swift, an uprooted tree was laid across the river for support. My socks had already been drenched in crossing one of the bridges. So pants were promptly taken off and I waded through the waist deep river. It was treacherously deep in some parts and very slippery. Some stones were large and round “ Like giant prehistoric eggs” as Gabriel garcia marquez had put it in his “ One hundred years of solitude”, while others were small and sharp. I slipped a couple of times before I reached the other end and Lo! another stretch of rivulet was waiting to be crossed. And so crossing that too I finally reached the foot of the fall. Two officials were there to ensure no one ventures too deep. “There have been many deaths here. The pools can run very deep and rocks are very slippery”. He was right, it was indeed a very slippery affair. The way to top of the falls was also closed. Then all of a sudden it began to rain. And an unforgiving torrential downpour it was. I was completely drenched in no time and barely saved my camera from suffering the same fate. The pakoras that I had saved for the proverbial rainy day were of no use now. They had turned into shapeless blob by then and thus went my simple plan for a toss. The rain drops bit my skin like tiny darts. I endured the storm with many others with my head bowed in submission. Sometimes that is the best way.

Shoes had put on extra ounces due to absorption of water, and with heavy feet and worried heart, I turned to return. There were no bike taxis left. The rain had stopped as quickly as it came. But a spanner in my wheel of fortune had been thrown. I would have to walk all the way back, another 14 Kilometres and the mud track would have by now turned into a small river in itself. Following the noise of an approaching train I began to look for the railway track.

In no time rain came down heavily again. Little streams of water flowed where footpaths had been. After much climbing through dripping vegetation I finally reached the track and started walking back. At the board of Sonalim station (There is only a board really and no trace of a platform), I met 3 Gentlemen in their 50’s. Seemingly old friends who were trekking like me. They inquired where I was coming from. They were surprised to know I had only been to the base of the waterfall.

“You have missed everything then. You should trek right up to or beyond Dudhsagar view point.” one of them said.

“Is it safe as it is not allowed to follow the tracks beyond Sonalim?” I inquired.

“Oh yes. Just take care of the train when you pass through the tunnels and the views are spectacular.” He said.

So I turned back and hurried towards the falls. It would take me another 6 kilometres to and fro from where I stood. But the views were indeed mesmerising. There was not a soul in sight and passing through dripping black tunnels was an unforgettable experience. I kept looking nervously over the shoulder to check whether any trains were approaching from behind. But trains keep blowing their horns to warn trekkers to step aside. 2 of them passed me. Commuters looked curiously at me as if I was some wild animal of the forest. Then I finally reached the railway bridge in front of the falls. It was magnificent. The crickets I met earlier shrieked the loudest here to overpower the roar of the falls. I had accidentally stepped in their world. The water in the falls was immense. It did not look so much from below. I could see the base of the falls. I was there more than an hour ago.

Listening to the roar of the fall standing right in front of it, was an unnerving but magical experience. There was no soul in sight and I felt like I was the only person in the world. Frederick Nietzsche had once said “Also if you gaze for long into an abyss, the abyss also gazes into you”. It stand true for waterfalls as well. Dudhsagar suddenly appeared to be enormous and I felt conscious of my own diminutive size. The waterfall is forbidding and enticing at the same time. For some reason a shudder went down my spine. Maybe Dudhsagar had gazed into my soul.

Recovering from the strange spell and savouring the sight as much as I could, I turned back for a gruelling walk back home. My feet were tired of walking on pointed stones of the railway track. These things are big energy sappers. The rain kept ambushing from time time when I least suspected it. Painful rashes were beginning to develop due to humidity and friction. I tried to remember “some of my favorite things” till I reached my Activa after 3.5 hours of tormenting walk. It was another one and a half hour ride to palolem. By the time I reached Palolem, my feet were numb after 30 km odd trek through mud and stone. I was walking with my knees pointing sideways like a grasshopper to avoid pain. When I reached my bed, I crashed!

The story can also be read on www.yatrigulaak.com