The Best Sunset From White Desert

Deserts are not often a visited place for travellers in my country but this one is not to be missed .. Yes i am talking about One of the biggest deserts in Asia - White desert.

The Rann of Kutch spans the two countries of India and Pakistan. Due to the sensitive nature of the border, permission is necessary to visit the Rann. This can be obtained by submitting a written request, along with your photo identity, at the Bhirandiyara village checkpoint, which is about 55 kilometers from Bhuj. While at it, taste the wonderful mawa, a milk sweet, for which the village is famous.

You can also apply for permission at the Gujarat Police DSP office near Jubilee Ground in Bhuj. This permission letter must be presented at the entry point of the Rann.

Dhordo, which lies about 86 kilometers from Bhuj, is the best point of entry into the desert. The government is also developing the village as the ‘Gateway to the Rann’. The other entry points are Hodka and Kharaghoda Village.

The easiest way to get to an entry point for the Rann of Kutch is to travel from Bhuj. Bhuj is connected to major cities across India via Air, Train, and Road. Once in Bhuj, you can hire a taxi or take a bus to the Rann.

There are private tour operators who organize guided tours across the Rann, starting from Bhuj.

The Kala Dungar or the Black hill is an offbeat view of the Rann of Kutch. Set 458 meters above sea level, it allows you views of the Rann right across the border into Pakistan. Just about twenty-five kilometers from the village Khavda, (this is seventy-five kilometers from Bhuj).It is best advised to take your own transport, if planning to visit these places, as public transport to them is infrequent.

We started our journey from Chandigarh . We had our direct train to Bhuj city but somehow it got delayed for more than 10 hours. Phewww Indian railways at its best as always .. Grow up Indian Railways - Time is Money .. We had planned to reach bhuj after 23 hours of journey but eventually reached there after a hectic 34 hours . All thanks to Railways ..

We reached Bhuj early morning at 5am . There were no shops at that time which were opened so had to wait for another 30-40 minutes to have our first meal of the day. Finally after a wait of 30 minutes we had our breakfast - Fafda and Jalebi . As the saying is When in Gujarat do as the Gujaratis do.

After our meal we set out to reach our hotel to freshen up for the day and start exploring bhuj city . Within half an hour all my friends including me got ready and were all set for a day long itinerary . We had city tour and offcourse The Great White Desert on list.

Our car driver was at the hotel premises at the given time . Thank god he was on time. Not everyone is like Indian Railways. We had our seats and started our journey . The driver was a warm and hearty person by nature . He was a great guide and told us about the culture and traditions of Gujarat. He also taught us some gujarati words.

Kemchoo being one of them. The whole journey was a rollercoaster ride till white desert. Within 40-50 minutes we had reached on the outskirts of desert. There is a hill name Kala Dongar which gives a sneak peak of the Arabian Sea.

The view from the top of the hill is breathtaking and we too were awestruck by the view. I wished we were there for a longer time but we had 2-3 hours there which was enough to enjoy the mesmerising view.

We came down from the hill which had around 200-300 steps. The climb took us 30 minutes which was worth and it took hardly 10 minutes to come down. I wish to visit this place again and recommend every traveller who is going to White desert to stop over at this place just for the view it has to offer.

It was about 2 in afternoon by now and we still had 20 minutes distance to cover for the desert.

Tip 1 - There is not a single shop on the way to desert so carry water and eatables or snacks for the journey.

Also carry umberella if you plan to go in summers.

We had our lunch in the car only. We took paranthe from the hotel only . Being a punjabi we can just fill our stomachs by having heavy breakfast. These gujarati items are tasty but they were not killing our hunger. So all you punjabis out there another tip. Carry heavy food items.

The roads leading to the desert are good and well maintained. By the time we had our lunch done we reached the destination.

Here we are FINALLY .. At the White desert which we had Googled from so many days.

Tip 2 - The car is stopped 300-500 metres away from the main entrance so wear comfortable shoes . You need to walk a lot and burn calories.

We had the best sunset from the desert in the state of our Prime Minister. We had some really nice photos clicked and i made a timelapse of the sunset. We met a lot of foreigners and made some of them our friends. We had a brief interaction on the culture and customs of our country.

By this time it was becoming dark so we came back to our cars. There are stalls of food items outside the main entrance of the desert so dont worry you will not starve if you forget to take food items along.

It was already 7pm and we left the desert just to come back again and enjoy the best sunset of Gujarat state.

We reached Bhuj city by 9 in evening. By the time we reached our hotel the dinner was ready. We had our dinner and went for a short walk in hotel premises and called off for the day ..

This place is also one place which should not be missed just like Mandvi Beach .. 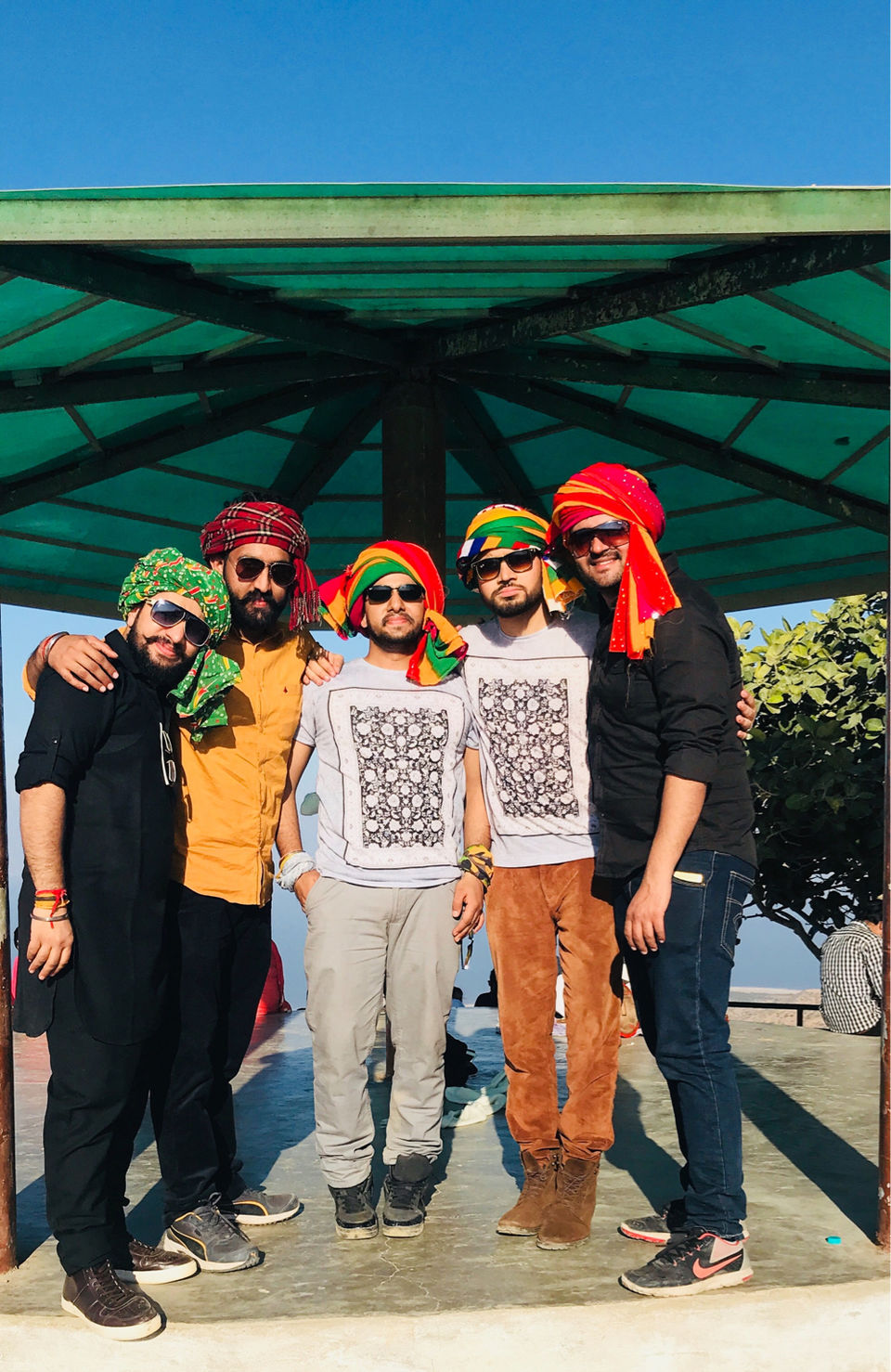 when u have witness the best sunset 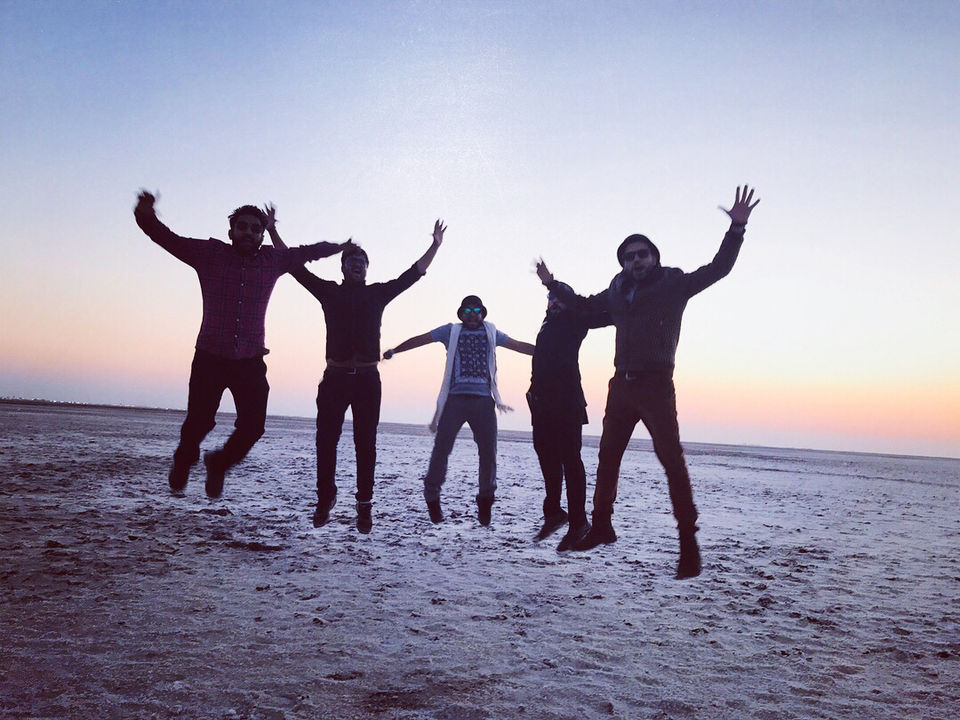 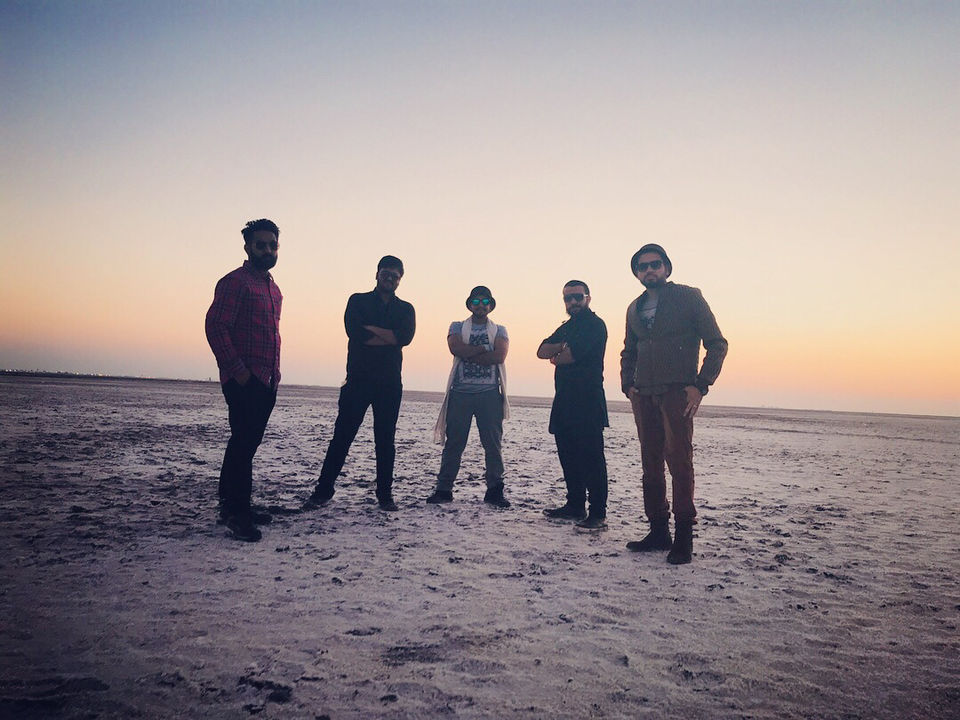 laughing at the photographer 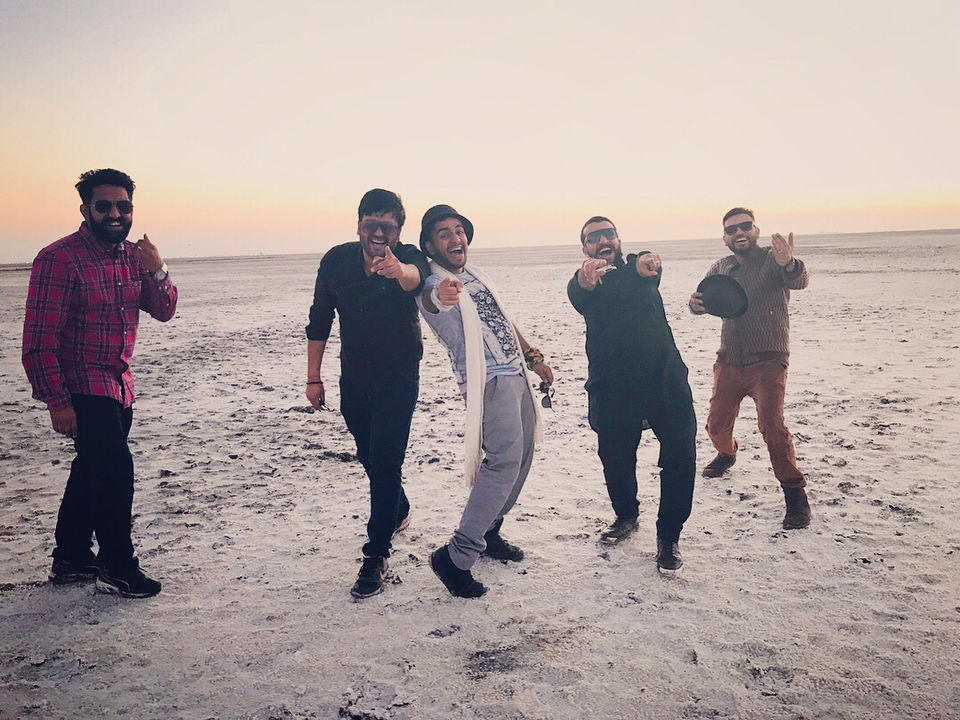 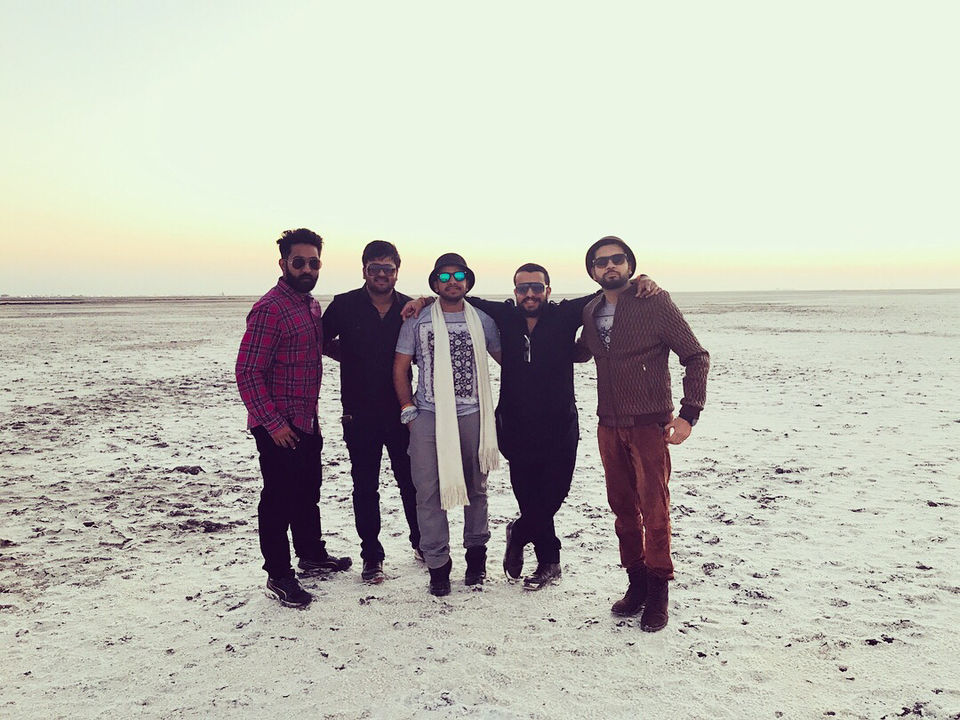 yupiee we made it to white desert on time 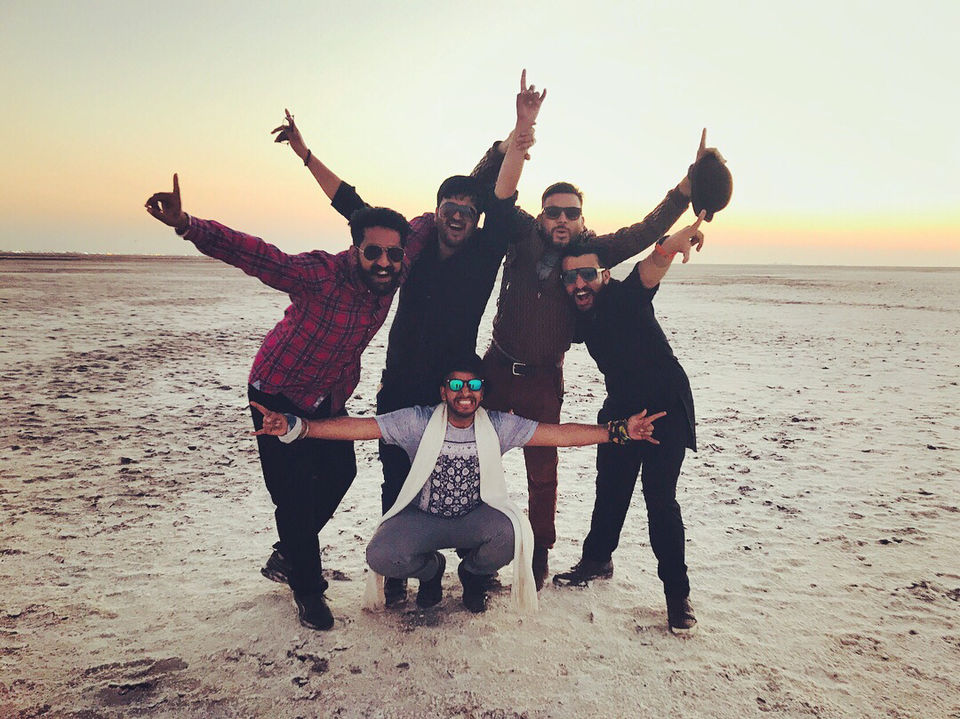 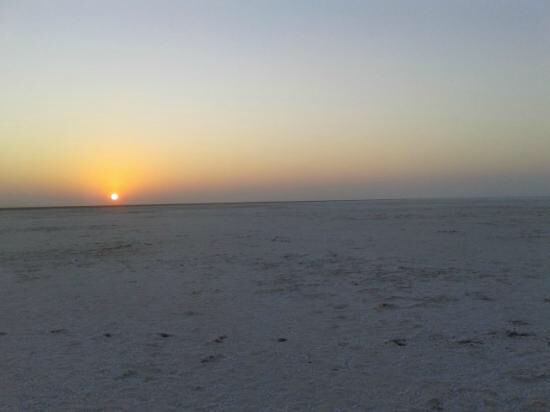