HotelsMap
From England I had arranged an expensive 90 euro taxi ride to Vinales rather than take a ride to Havana just to rummage around in a suitcase, scatter things around, sleep for one night, pick up the scattered things and set off again in the morning. I had read that the views in Valle de Vinales were spectacular and wanted to wake up to them. It took two hours and I hurtled along the almost empty motorway answering Jorge’s barrage of questions in broken Spanish until exhausted I gave up and and decided to continue improving my Spanish after some sleep. Once off the main road, poor Jorge, probably two hours away from home had trouble finding the hotel. I helped him decide at ambiguously sign-posted junctions and kept a list in my head of all the times I had read that Cuba was a very safe country, especially when he stopped the car a couple of times to turn around and try to understand my disappearing Spanish. I kept quiet. Finally I checked into the Hotel Los Jazmines and was taken down a path leading away from the main building and down some steps with little terraced bungalows to my left and the warm pitch black night to my right. The darkness was alive with the chorus of a trillion insects. I realised that I had almost forgotten the smell of fresh air. 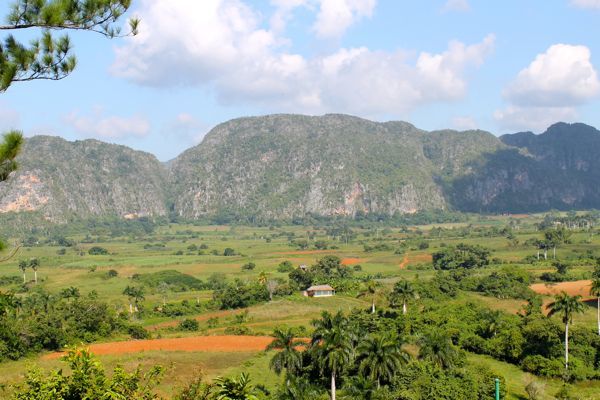 HotelsMap
En route to finding the path across the valley to the town I had come across two small restaurants, in one they told me that they had very good food for vegetarians and served rice and vegetables and wine. I tried to walk there at night, down a path by the hotel but after five minutes in pitch darkness with neither light nor light pollution the silence of the woods suddenly began to spook me. They had asked me if I was definitely coming and I told them I didnt know, in the darkness on the deserted path I realised I probably would have been there only guest as the night time seemed a time to dine in the hotel after all. On my last two days in Vinales I stared to slow down and make the time go more slowly, not doing so much and not reading so much but simply sitting, or lounging by the pool and watching the beautiful valley. This watching and deliberate slowing down of time was helped by the black birds of prey circling high above the lines of tiny horses wending their way through the valley and farmers, driving their oxen minutely below. The beauty of the lush emerald valley and the strange mountains rising up from it sometimes became a backdrop to the characters passing through it. I had positioned my lounger in the shade at the edge of the pool and at the edge of the hill top by a spot where I knew inevitably coach trippers would periodically come to take pictures and smoke and shriek. 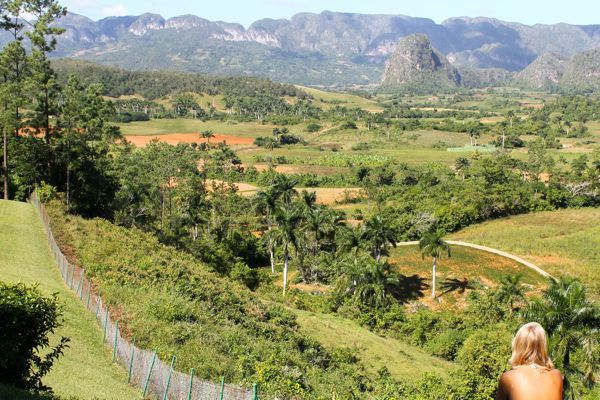 HotelsMap
In Vedado, the vegetarian stalwart of pizza is delicious in the cafe style formica tabled Trattoria Maraka’s on Calle 0 between Calles 23 and 25, literally around the block from the Habana Libre Hotel and its also delicious a taxi ride away in the old town, served on the elegant piazza in Restaurante La Dominica. I read Graham Greene’s hilarious ‘Our Man in Havana’ while I was there and delighted in visiting the streets of the old town that he mentioned so often. 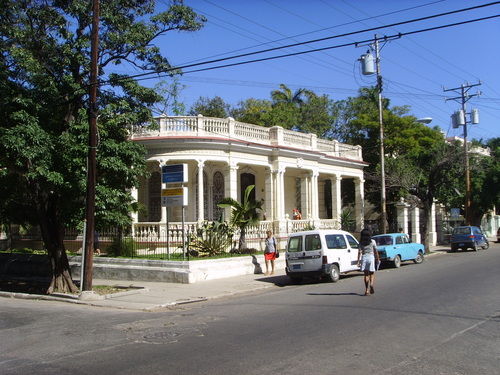 HotelsMap
By day Havana is noisy and hot and polluted but the wall around the pool at the Habana Libre, formerly the Havana Hilton before the revolution is an adequate barricade against the noise of the old cars. One can lie under a canopy drinking pina colladas or too sweet mojitos and look up at the rooms occupied by Fidel, Che et al circa 1959. The rooms there are large and comfortable and modern, afford spectacular views over the city and are drenched in sunlight via the floor to ceiling windows. But at night the heat and the breeze from the sea are delicious. Around Las Ramblas in central Havana the pavements throng with brightly dressed locals and live music emanates from every bar. In contrast the old town with its magnificent buildings is elegant and staid and more touristic. 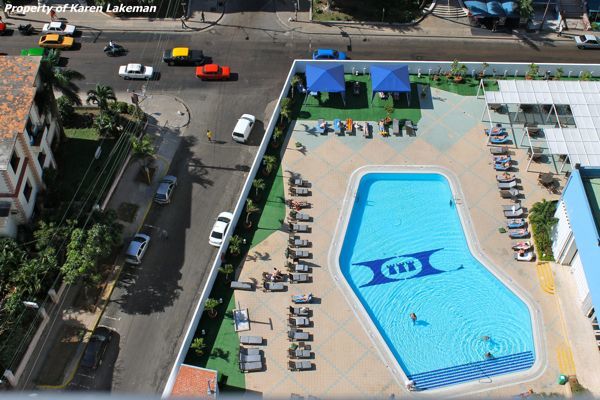 HotelsMap
At the nearby Hotel Nacional, all leafy lawns and shade, a tranquil antidote to the glare of the modern Habana Libre where we whiled away a few afternoons, they offered to take the ham out of the pre made ham and cheese sandwiches when they had run out of the cheese ones. I declined. .The fruit at breakfast is amazing but salads at dinner in various restaurants were usually made up of shredded cabbage or pickled cabbage. The delicious vegetables many of which are grown in organic urban gardens from the markets dont seem to be served to tourists who can pay for expensive meat. Following Cuba’s 1959 revolution and the United States implementing the biggest trade embargo in history the Soviet bloc was Cuba’s largest trade partner to the tune of 85%. Following the collapse of Soviet Union in 1989 Cuba could no longer import the chemicals it had been using in agriculture resulting in the world’s largest conversion from ‘traditional’ chemical led farming to organic farming. 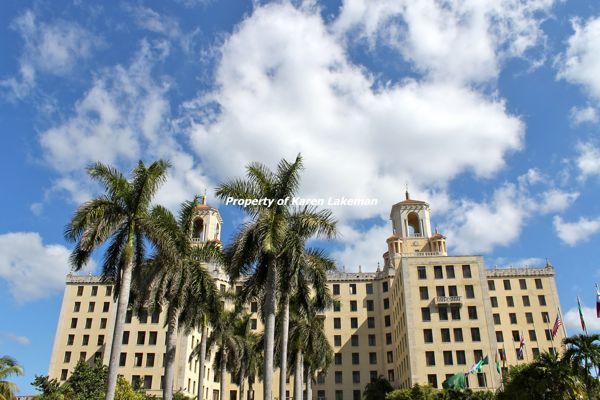 HotelsMap
The big white hunter and Nobel prize winner Ernest Hemingway is up there along with Fidel and Ernesto on Havana’s A list of tourist attractions. Hordes of visitors flock to his house in the suburbs more than fifty years after his death by his own hand in 1961. In fine weather they can see his typewriter where he always stood to write, his drinks cabinet, his bed and his trophies. Bequeathed by him to be used as an a educational centre it was reopened as a museum in 2007 when it became apparent that nothing would be preserved unless it was protected. On fine days visitors can peer in through windows that are closed during inclement weather. It’s sprawling but not flamboyant and a sanctuary for the descendants of his many beloved cats and dogs for which there is a touching cemetery. 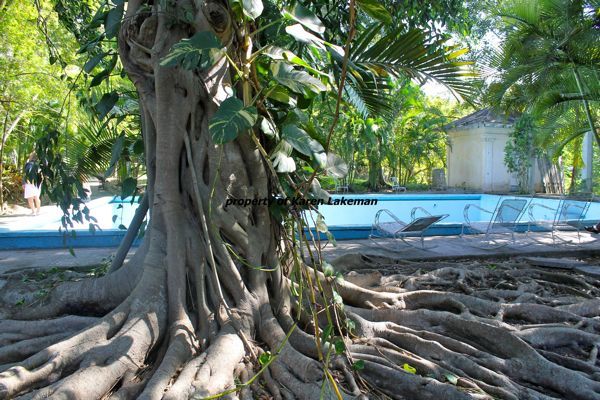 HotelsMap
Back in town, above the door of the Bodeguita del Medio, hangs a stained sign which reads ‘My mojito in La Bodeguita. My daiquiri in El Floridita. Ernest Hemingway’ and the tourists congregate to drink the overpriced drinks. The food is standard fare but the vegetarians among us had fried bananas along with the black beans and rice and the walls are lined with interesting photographs and the atmosphere is lively. I read and relished his spare and powerful prose avidly a long time ago. It solicited the heat of the sun and love, passion without discussion. His house is a animal sanctuary and has a dog cemetery and this love of canines and felines is as always hard to reconcile with his hunting of big game. For Hemingway and many others wild beasts are there to be conquered, or shot and stuffed. And of course he liked to rip creatures from the sea. Steven Berkoff wrote a beautiful poem “Big Game Fishing’ as ‘anindictment those who boast of ending the lives of beautiful creatures’. 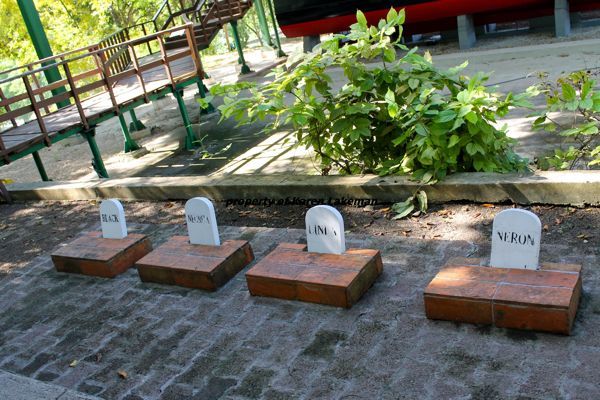 HotelsMap
My advice would be to take a four peso taxi from Vedado or Habana Vieja or make an afternoon of it and take a long walk along the famous Malecon. You may have to cross the road sometimes to avoid the waves that crash onto the pavement but you can see the stunning but crumbling architecture along this iconic sea road and recall scenes from the film Our Man in Havana. Fidel allowed the 1959 to be filmed in Cuba but complained that the brutality of Batista’s regime was not accurately depicted. Greene commented ‘Alas, the book did me little good with the new rulers in Havana. In poking fun at the British Secret Service, I had minimized the terror of Batista’s rule. I had not wanted too black a background for a light-hearted comedy, but those who suffered during the years of dictatorship could hardly be expected to appreciate that my real subject was the absurdity of the British agent and not the justice of a revolution.’ 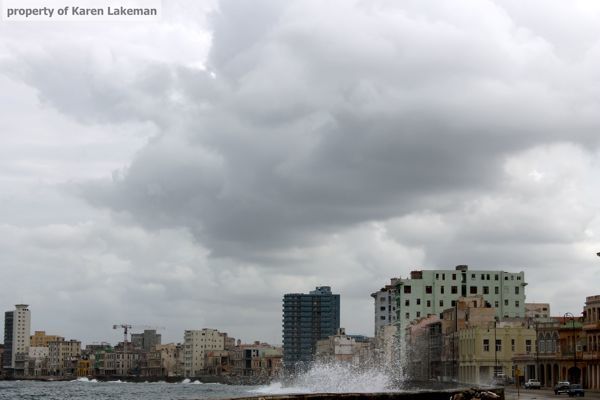 HotelsMap
We bought tickets to the ballet at Gran Teatro de la Habana, and worrying whether the the ancient van would get us there on time was not the only bad start. The ballet was exquisite and I recognised some of the elegant and beautiful dancers I had seen walking around the old town. Alicia Alonso Cuba’s Prima ballerina assoluta said “The Cuban style comes from deep within the Cuban spirit, from our joys and from our sadness,’‘ Alonso says. “Some people are turned inward. The Cubans are always out, sensual. The Cuban ballet style comes from me, from my way of projecting my whole being. ‘What looks natural on the Soviets,’ she says, ‘would have looked mimetic, like a mannerism on us. We had a hard time explaining that to our Soviet friends.’ Many Cuban danseurs and danseuses, just like their Russian counterparts have defected whilst on tour.

HotelsMap
A lot of people bypass the hustle and bustle and exhaust fumes of Havana and head straight for the beach resorts. One afternoon, those of us not staying on for a beach holiday at the end headed out to one to see what all the fuss was about, this was the Caribbean after all. A thirty minute taxi ride took us to the one of the Playas del Este and the beautiful golden sands and azure waters of Megano. It was stunning, uncrowded and unspoiled but with bamboo sun shades and little beach huts selling delicious cocktails and snacks. 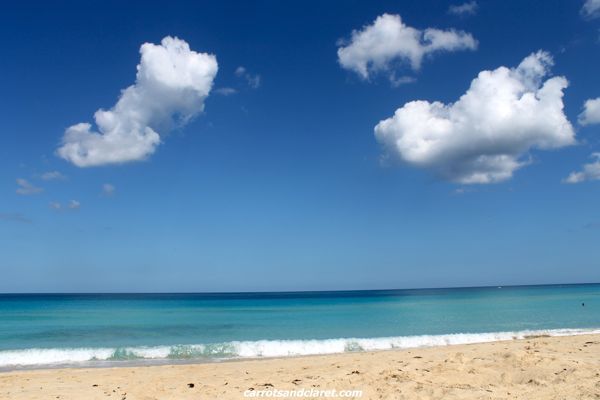 HotelsMap
We decided on one cabaret show too and the Cafe Parisien, located next to our afternoon haunt the Hotel Nacional was chosen. It was a dazzling spectacle that almost lasted too long and is probably one of the most expensive nights out to be had in Havana. It certainly ticked the ‘see a cabaret’ box. The room was small and intimate and plush and we had an excellent table next to the stage. The food, paid for with the tickets was shocking. Ham in the vegetarian pasta and the carnivores didnt like what they got either. 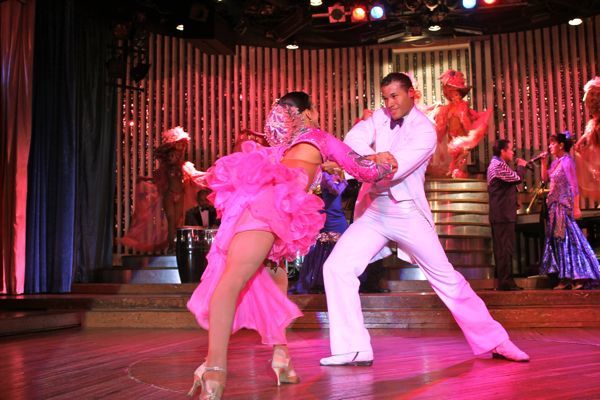 HotelsMap
Havana was wonderful in spite of the absence of the big draw, our original intended mentor. The disgruntled ones along with all the others were offered a free weekend of coaching with Steven Berkoff (who had had contractual obligations) on The Isle of White and the best fun ones went along and it served as a marvellous reunion. Hours were spent in elegant high ceilinged rooms and ye olde pubs with the mesmerising and formidable thespian and captivating raconteur. 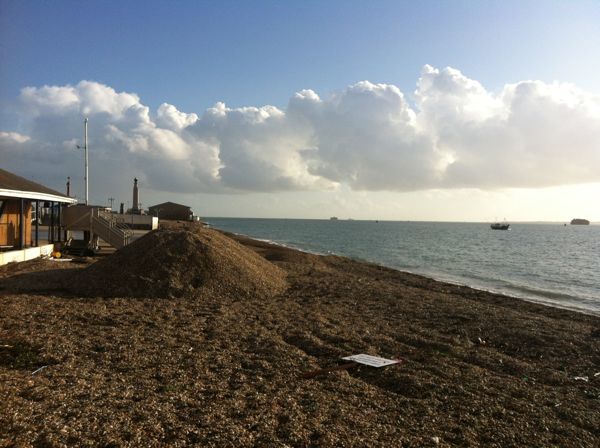