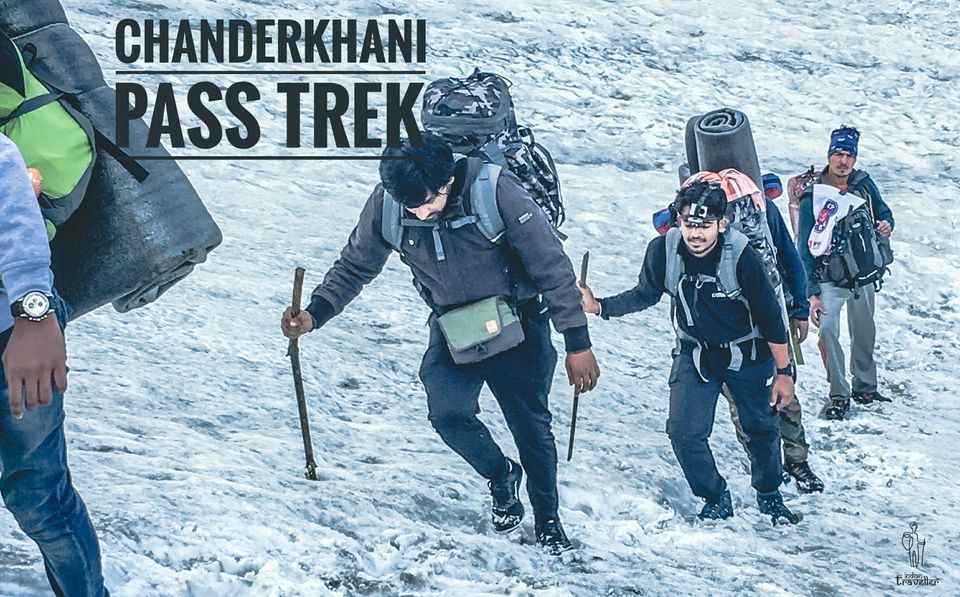 The next day we got up at 7 am, had Maggi in breakfast and started walking at around 8. The way was through lush wild forests of deodar and pine trees. We met a few people coming down that way, they were from the YHAI group and wished us luck for the trek. They also told us that there is a good amount of snow at the top and that would add fun to our trek. The fact that there were a few children of 14-19 age group also gave us some confidence that we can at least reach the top. We weren’t thinking much about how to cross the pass yet.

After walking on steep slope for around 2 hours, we reached Ghon kradi and we could see Naya Tapru. We decided to take a halt there for few minutes. It was a beautiful location and now we were surrounded by mountains on almost all sides, the Dhauladhar behind us, the panoramic view of the Pir Panjal range and also the view of villages of Kullu Valley. I requested our guides to give us some extra time before we move ahead so that I could take more pictures and enjoy that place. Naya Tapru was just a couple of hours away from this place and we decided to have our lunch there.

In the next 2 hours we reached Ghon kradi and decided to take a halt for a few minutes. I requested our guides to give us some extra time before we move ahead so that I could take more pictures and enjoy the serenity of the place. Naya Tapru was just a couple of hours away from this place and we decided to have our lunch there. At around 1.00 pm we reached Naya Tapru and it was a beautiful place surrounded by mountains on almost all sides, the Dhauladhar range behind us and the panoramic view of the Pir Panjal range on our left. Also, the view of Deo Tibba and Hanuman Tibba towards the valley and first sight of Chanderkhani Pass added to our excitement for what was coming next. It looked really close from where we were standing but we actually had to climb 3000 feet more. The tree line was vanishing now and to add to our worries, we could see the valley slowly getting covered by fog and dense clouds.

The guide told us to make it fast because it would be difficult to walk if it rained. It started drizzling and we were all kind of worried. We passed a few grassy patches and there were no signs of Pine and Oak trees now and all we could see were Bhojpatra trees and dwarf Rhododendron shrubs. The sky was getting darker and we could hear the thunder giving us the hints that the weather might get worse. There was a steep patch made by a water stream on our way and the rains made it tougher for us to climb the stones. We couldn’t walk and decided to stop near a small holy place of Jamtagni rishi (the saint who is worshipped in the Malana valley), where we waited for 20 minutes. The patch for the next one hour was almost plain and the rains had made the weather conditions pleasant to walk. We literally ran at a few places and that was the best part of second day. At around 4.30 pm we made it to the base camp for day 2 which was right below the Chanderkhani Pass(at an altitude of 10,800 feet). We found a Maggi point (by the YHAI people I guess) there and had tea and omelet, relaxed there for a while and then moved to find places to pitch our tents.

It was an extremely cold evening. We pitched our tents and took rest for a while before moving out of our tents in warmer clothes. Patches of snow were present right behind our campsite and we had full view of Chanderkhani pass. Fog and dense clouds blocked the view of valley and all we could see was dense shrubs and Bhojpatra trees at a distance of some 100m to us. The maggi point near our camp was owned by guide’s friend so we got a place to sit around the ‘Chulah’. Bhushan wasn’t feeling well that day because of the sudden altitude change and was suffering from headache. While the food was getting prepared, the guides told us stories about the people with whom he had gone before for the same trek. He was also telling us that during the annual fair held in Malana, people from Manali and Kullu cross the Chanderkhani Pass in less than a day’s time.

The temperature in the night went below zero and the rains made it colder. Everything in our tents was at freezing temperature and the only place comforting enough was our sleeping bags. The next day and the last day was the most important day for us and our guide told us to get up early so that we cross snow patches before the sun comes up and melts/softens the snow and making it tough to walk. 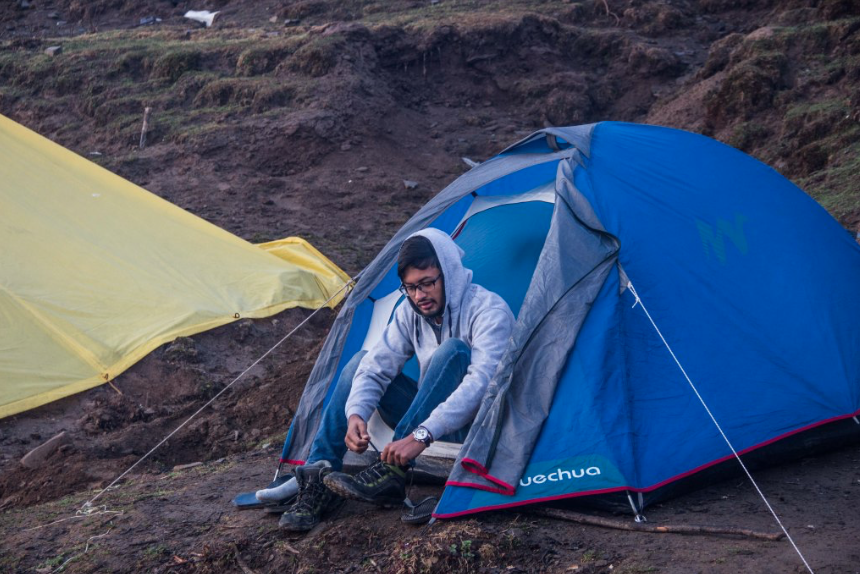 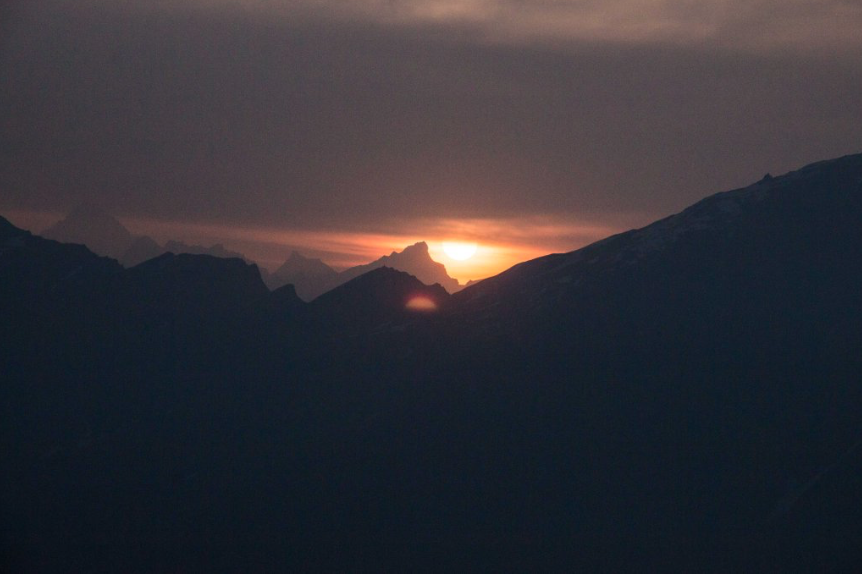 The last water stream that we saw before entering into snow 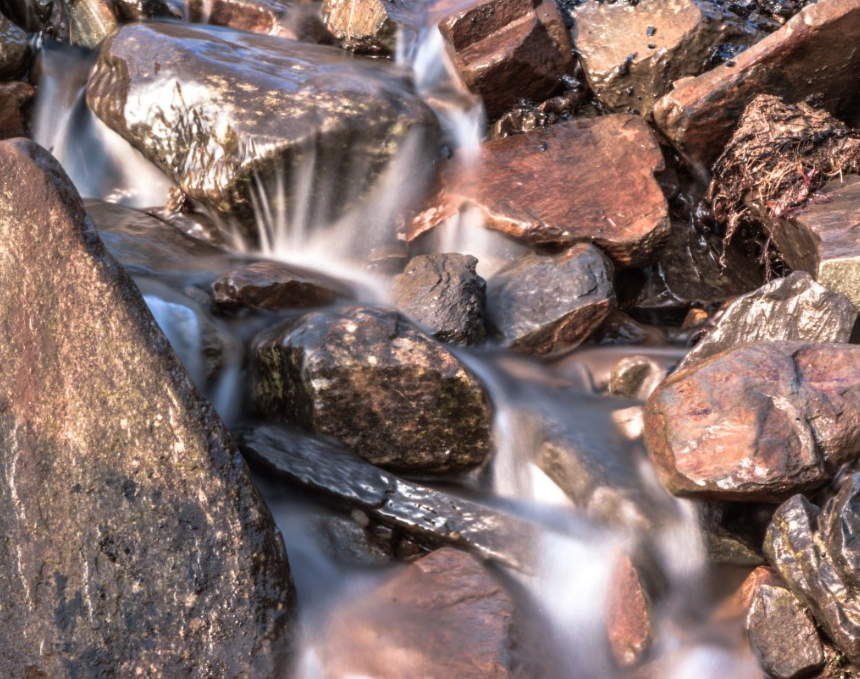 But the next day we got up around 7, folded our tents and had breakfast by 8. We were already late and by then snow wasn’t quite hard to walk easily. The sticks we had for support proved to be really crucial here. On one side we could see the Chanderkhani Pass while on the other side, it was a steep slope going all the way down to the valley. Someone who is afraid of heights would have definitely panicked there.

And this is where the most excited part of the trek began – Snow! 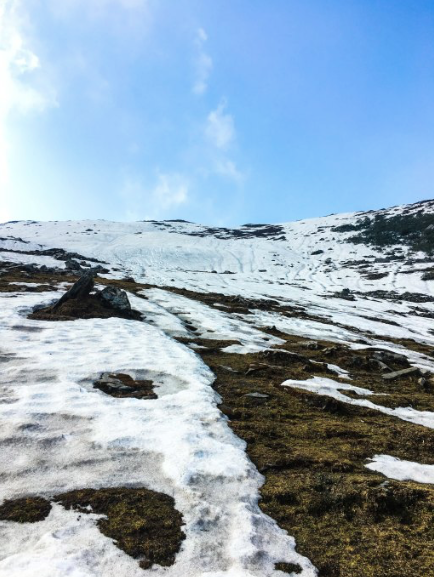 The Chanddrkhani Pass on one side and the valley on the other. One wrong step and we could have slid all the way down again! 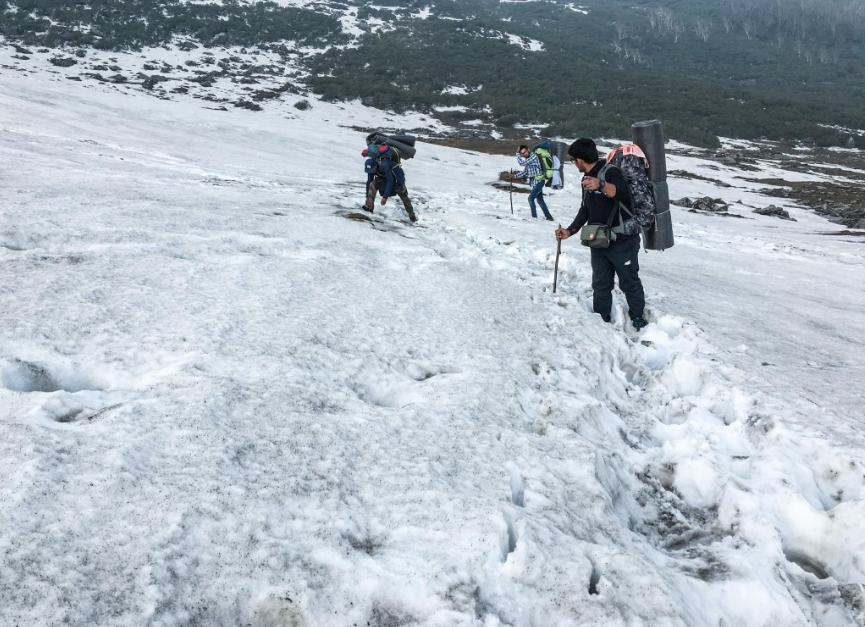 The guides had warned us earlier that it would be one of the most tough ones we had ever seen. There’s a thing with treks, the excitement is all to reach the top but not to get down from them. But somehow gathering our spirits we started off. It was looking easy initially but then came the tricky ever thin crossovers with snow on one side and nothing but 1000s feet deep blurry mother earth. Thankfully our guides helped us to get through the nerve wrecking part. As we were getting in our grove and everything was feeling comfortable, it was time for some fun, the hailstorm arrived!! Not only was the impact if solid hails hurting our bodies, it was making our path wet and extremely slippery to descend thus making our descent as difficult as it could have been.

And we always took out time to click a few pictures. 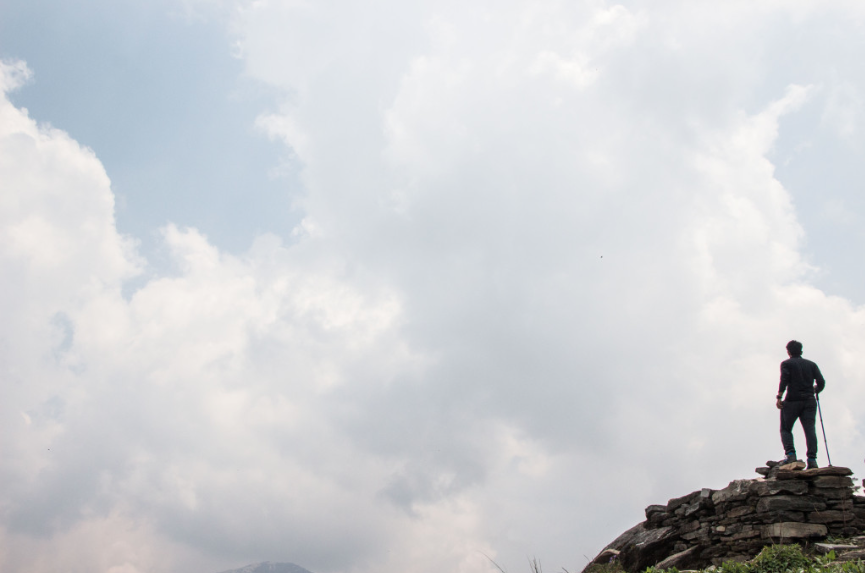 The best part of our snow trek? – Anurag’s Sport Shoes!! 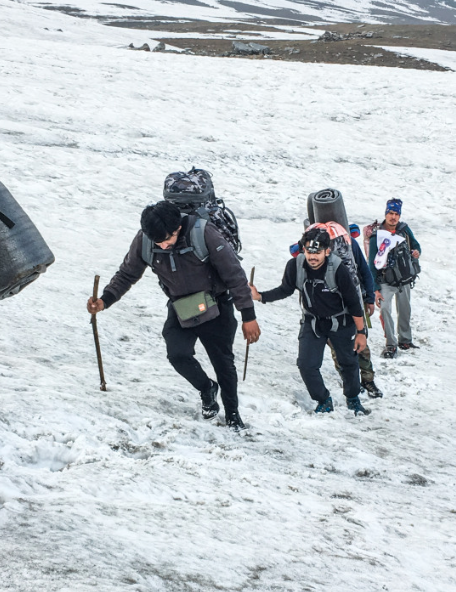 But we kept our heads cool and feet firm and kept on moving in the solid rain fall. Some of us slipped fell rolled got hurt but that didn’t make us stop. The descent then started to get even steeper, the fact that we climbed the pass in two days and went down in a day makes the point. The legs were starting to shake after a while and the morals were starting to break as we still had a long way to go. 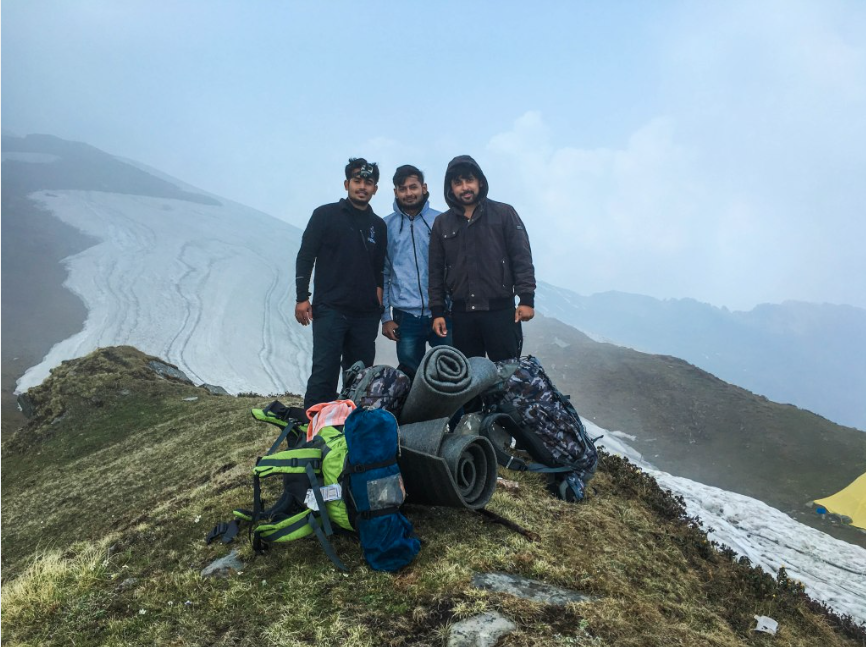 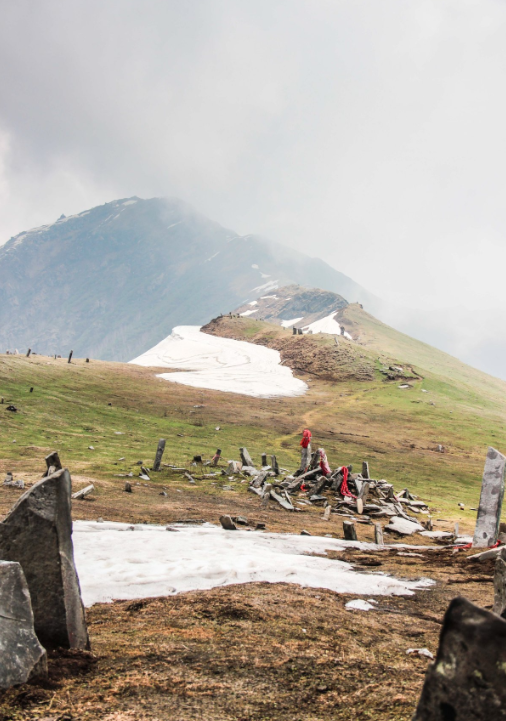 At around 4, the rains stopped and we thanked god. After walking for another one and a half hours, we reached Malana village. We thought it was over and we could take a cab from there to Bhunter, but Malana is an isolated village and one has to walk for 2-3 kms to reach the main road. That last stretch proved to be really tiring and all of us were completely drained by now. Knees weren’t letting us walk and our swollen feet were almost dead by now. We somehow managed to walk that last part and reached the main road to get a taxi. Everyone was silent for the next 15 minutes or so, tired and exhausted. But what we were feeling good about was the trek that we just completed.

The most tiring part of the trek – walking along this pass and then climbing down. 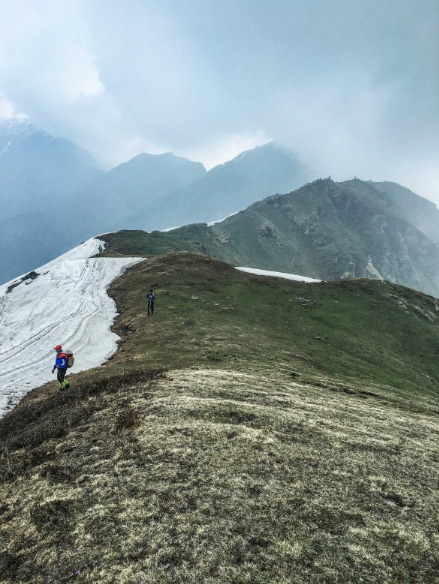 Climbing down to Malana Village 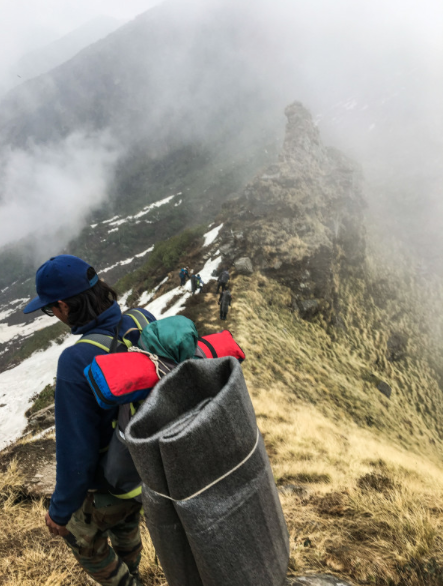 From a random unplanned solo trip a week before the starting day to a properly planned trek to one of the most beautiful places in Himachal along with 3 friends and 3 local chaps, this trip changed the way I used to think about mountains and my love for them has increased manifold. All I am left with now is an obsession to go for another trek at the earliest and get lost again! 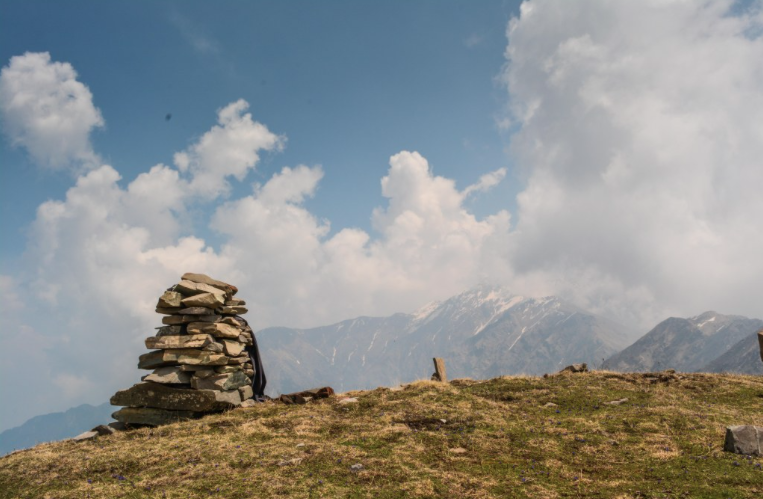 Click here to watch a 20 sec short video that I shot at Chanderkhani Pass.

The next day, we left for Mandi from Kullu and visited Parashar Lake. Its a hidden treasure in Himachal Pradesh and one must visit the place over any weekend in winters or monsoons. Read more about Parashar lake in my article here.