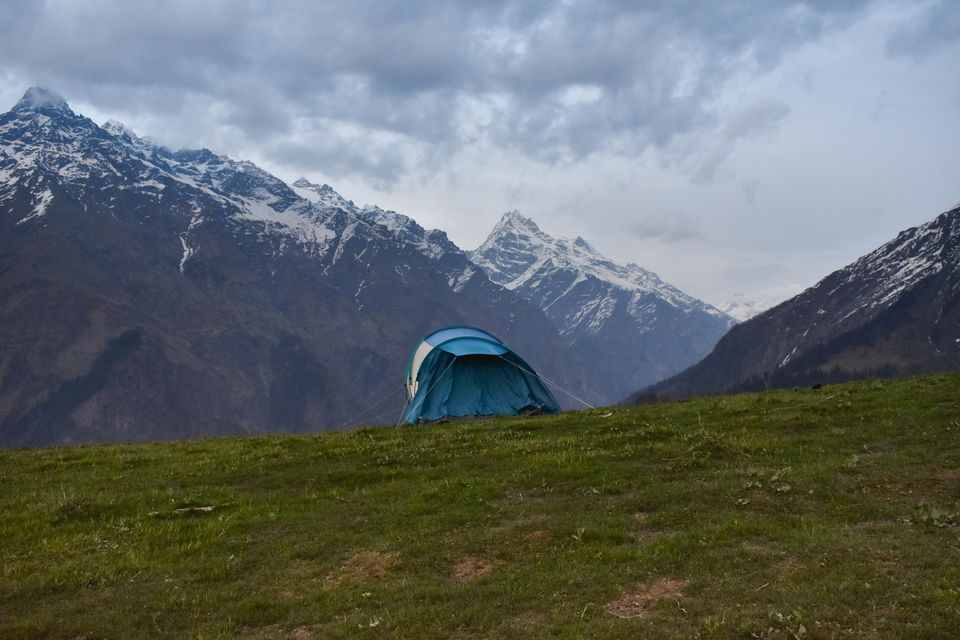 Definitely this is my first write up on my trekking journey. Kheerganga and BuniBuni was in my mind since long.After a research before going there ,I found a number on google(sometimes it works tremendously good) ,and luckily that number helped me to reach out to the person (Om Prakash Ji) who had been my guide through out this trek.

On 28th April,2018 I landed in Delhi .The bus booking from Delhi-Bhuntar was done previously through redBus. I took the metro and reached the on boarding point which was Majnu Ka Tilla.The bus exactly started at 5 P.M on the same day .In the next morning(29th April,2018) by 7 o'clock redBus service arrived at Bhuntar.I took my luggages and had tea for welcoming the chilled morning of Bhuntar .I had already done my hotel booking to Tosh ,so I was looking for shared cab from Bhuntar to Tosh and finally got one.By 10 o'clock I reached at my hotel room.The name of the hotel was Paradise Holiday Resort,and it was the second top hotel in the mountain's lap of Tosh village.I am assuring you all that the walk you will have to reach the hotel from Tosh taxi stand is absolutely worth enough.

Next morning on 30th April,2018 I started my trekking to kheerganga.Kheerganga is located in Parvati valley and is perched at an altitude of approximately 2950m. There are many routes for going to kheerganga.As in the very next day after kheerganga,I was going to trek bunibuni which was as per my guide a bit hectic one than kheerganga.So I chose the shortest one for kheerganga which was through Nakthan Village.

On the way I saw many cafes at the trek-route side which is probably an exhilarating part of trekking to kheerganga .Undoubtedly the road was crowdy but the scenic beauty and obviously the sound of Parvati river was adding some another charm in my walking speed.

Finally after 5 hours of walking I reached kheerganga.I was not happy much been there because to me mountain should be not full of much crowd but kheerganga was just opposite to that of my thought.I got a warm welcome with tea and hand made bhujia by one of my trek guide's friends (He actually works for him and coordinate the business with my trek guide in kheerganga) .The main attraction of kheerganga is the "HOT SPRING WATER" ,well I missed it because next day I had to go for bunibuni and that charm was not letting me to go to spring water spot rather it was pushing me for taking enough amount of rest at the tent.

Finally my desired day came ,the bunibuni day .On the 1st May,2018 I and my guide Om Prakash Ji started buni buni trek from Kheerganga at around 10 o'clock.In the begining of the trek he introduced me with a small mountain tree which is very famous of making various medicines,it's called "NAGCHETRI" and it's demand is so high that it is sold at amount Rs.4000/kilo.Some of the part of the trails was through dense forest.I was head over heels to the trail because of it's uncrowded environment.

And it was ticking 5 pm at my watch , I ,my guide and porter reached BUNIBUNI. A divine land in this world ,the beauty of it's made by god so meticulously that no one can ever judge it's beauty to anything.After reaching there we made our tent ready and feed our hungry stomach.

That night I spent hours and hours amidst the silence and untouchable scenarios of mountains around me.We all were sitting in front of the fire and feeling the just silence mode of a night at BUNIBUNI.In the day all the hard trails I passed was just seeming an exam to me and BUNIBUNI was just result of that tough exam.

Now the last day of the trek came.On the 2nd May,2018 I started my descending walk to BARSHAINI thorough kalga village from BUNIBUNI.I must say the trail was so beautiful that I can't say in words.Finally I reached BARSHAINI around 12 pm and as per my guide's advise I got the bus from barshaini bus stand for bhuntar at 1 p.m.

Thus the trek ended but memories are alive like it just happened yesterday.

Here I am sharing Om Prakash Ji's contact number (9805897832).In case if you guys want to explore the unexplored bunibuni.All together it was a 2N/3D trek plan.