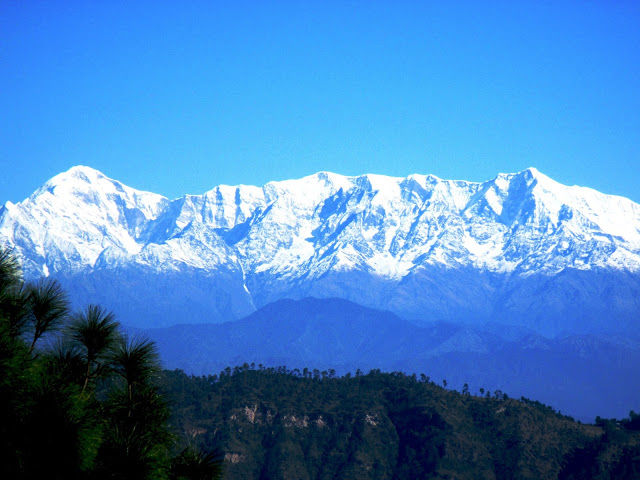 Due to the increase in Uttarakhand, the hills covered with snow, the shining Himalaya series in front of the eyes, leaving them from here, and the water flowing past the rivers and freshwater waterfalls have been with us since childhood. This natural beauty was incorporated in our daily life in such a way that it never came into my mind that life can be different from it. This unique feature of the mountains came to a realization when after coming out from here, these amazing scenes were closed. Now remember, due to being in the Kent Area, how many times will be known for the affair of Ranikhet, which is filled with green plaintiffs. Many times, even after going to Nainital, the attraction of the Naini lake continued to grow instead of being reduced even today. But the days are not always the same. Now as far as they look, there are grasses grown by artificial methods or they have been replaced by coconut trees. Now after coming to this end, when there is an opportunity to go home, the importance and attraction of the natural scenes that started from Bheemtal saw a little more suddenly.

Fog-clad mountains in the morning

We were acquainted with these delectable pleasures of Uttarakhand, but in the land of God, we did not get the opportunity to have pleasant interviews from our neighboring state of Himachal, during the days of reading, we planned to go to Shimla twice a day while traveling to Delhi, but that too Could not be One of the picturesque places of Himachal, in the name of Manali, is probably unknown to some of those who are interested in tourism or strolling, so how could we even leave the attraction of this place. Although according to the old sayings Manali was named after Manu, but in my opinion there is a different thought in the hill language. There is a sentence in the mountain language 'Man-ali ni al', which implies that the mind will come or not, hence The mind that comes in my own thoughts is Manali. Now it was thought to be so different when the name of the place is so beautiful. As much as thought about this, the attraction of Manali increased as well, while sitting in Google, saw many photos and the desire to see those places with their eyes also increased. This way, in the beginning of July 2011, Manali was planned to be Manali, but says whatever runs behind it, the more runs behind it, it also happened with us, the day before, the torrential rains It was difficult to go due, during which time there was a disastrous heart breaking event in Leh. This attempt was unsuccessful in this way, but the desire to be Manali never left the chase, or it should be said that he got more emphasis.

Now, when the desire was settled in the mind, once again the plan was made in the last days of June 2013, the difference was that there was a possibility of going through Chandigarh and there was also a small child. But our fate once again came a natural disaster on Uttarakhand and Himachal, our idea was to go in about the same time, now once again the whole matter went to the cold storage. The first unsuccessful attempt did not make much difference in pocket, but it was time to cut heavy pockets. This time it was thought that Manali does not seem to be just about ours. After this, plans to go anywhere but will not be Manali.

After some time we were sitting in peace, but once you have gone to some place to go, then where does the chase leave so easily? In the last days of 2014, the mind once again began to flutter to Manali and the interesting offer from the time the airline company supplied with it. Even one day again to book the flight of Chandigarh from Bangalore in May 2015 to go to Manali. However, due to the failure of the previous two times, this time there was doubt in mind even after taking the journey, but it was time to leave the house between hope and despair, and we got out. You have already read the journey from Chandigarh to Chandigarh, you have booked tickets in front of Chandigarh for the sake of Manali in Himachal transport Himabhav. A bus started on Chandigarh from schedule time, but after a short distance, the driver sabbat took rest for food.

After about half an hour, it was just turned on but it was not even an hour that the voice started and started from the bus, after a long investigation, the bus was badly damaged due to which the voice is coming but remain Seeing the smoke coming out due to sparking, all the passengers were a little nervous, because one was just standing in the place on the spot. Everyone was skeptical about whether he would get to Manali or not. Well, all the passengers also fell asleep while stopping by the turtle's move, but all the passengers also slept, but at the time of six o'clock in the morning, a little further from the Mandi stood at the place called Aut. After a while, it was told that this bus is not worth going forward and what was it was that all passengers started screaming over the driver what is this. He said that someone would sit in another bus but wait a little longer. More than an hour passed, but no bus refused to sit because all the buses were just full and more than forty passengers were standing on the road. If someone were to take anybody then who were all in a hurry. If there is no waiting for more than half an hour then we have thought that whatever taxis will come, the empty ones will sit in it because it is like this