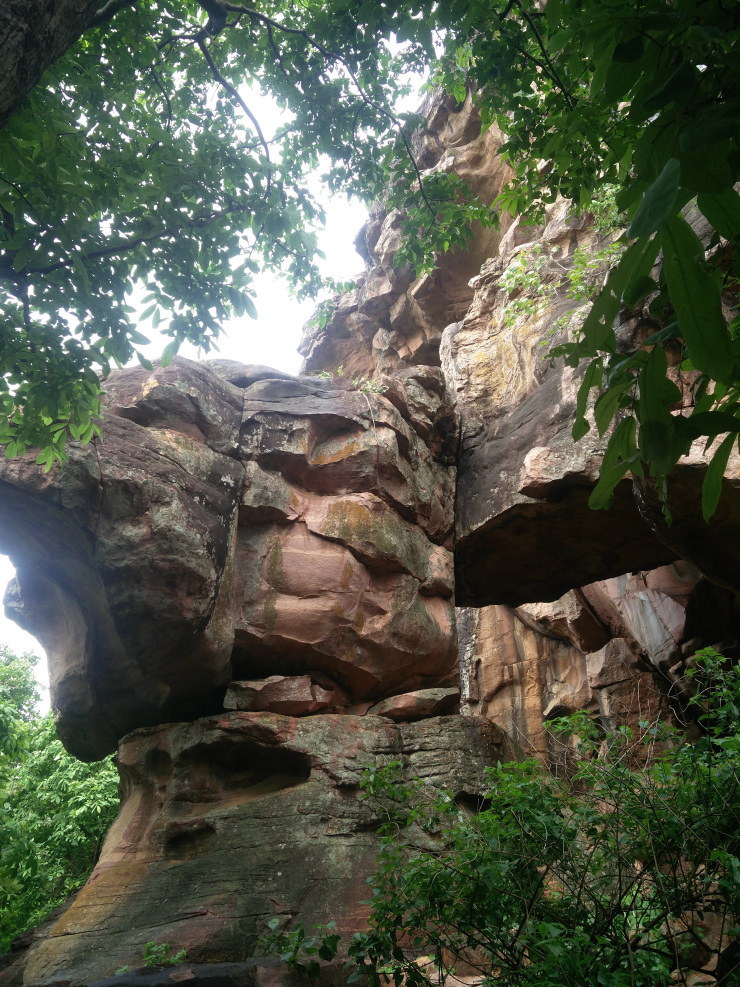 We have read about the evolution of humans from cave to cities but reading is completely different from actually experiencing the exhibition of earliest traces of human life. An archaeological treasure, Bhimbetka has around 243 rock shelters which consists over 400 paintings executed in red & white with occasional use of green & yellow with themes taken from the everyday events of aeons ago, the scenes & painting in the caves depicts the daily chores of that age. The oldest paintings are considered to be 30,000 years old, but some of the geometric figures date to as recently as the medieval period.

Bhimbetka is 45 kms from Bhopal towards Raisen on Hoshangabad Road. You will find a right turn with a board indicating the direction which will take you the gate where you will have to buy a ticket for you and your vehicle (or you can opt to walk 2 kms up on the hill ).

While driving up we felt a walk on deserted road surrounded by lush green planes will not be a bad idea. Ensconced amidst dense forests, rocky terrain and craggy cliffs, with the lofty rocks guarding the ancient premises, the caves of Bhimbetka present a breathtaking view even from as far as Obaidullaganj, a small town in the vicinity of Bhimbetka.

These rock shelters were discovered and revealed to the world by V.-S. Wakankar from 1957 onwards. On seven hills more than 500 painted sandstone shelters are known in an environment of forests, nowadays threatened by population increase and pressure. Some of the painted sites are very minor, with a few images only whereas there will be hundreds in others. They were put on the World Heritage List of UNESCO in 2003.

Fifteen of the most spectacular rocks, in an environment of convoluted cliffs on the top of a hill with a large vista, are open to the public. They have been skilfully fitted up with unobtrusive passageways leading from one shelter to another and effective protections, so that visitors can view the paintings at leisure but are kept sufficiently away not to cause any damage.

Guards provide information whenever necessary and see to it that the regulations are not broken. Information bulletins are also available at most of the shelters providing detailed information of the paintings and rocks.

The colors used are vegetable colors which have endured through time because the drawings were generally made deep inside a niche or on inner walls. Barkheda, a nearby town, has been identified as the source of the raw materials used in some of the monoliths discovered at Bhimbetka.

The superimposition of paintings shows that the same canvas was used by different people at different times. The drawings and paintings can be classified under seven different periods.

Period I (Upper Palaeolithic) These are linear representations, in green and dark red, of huge figures of animals, such as bisons and boar beside stick like human figures.

Period II (Mesolithic) Comparatively smaller in size, the stylised figures in this group show linear decoration on the body. In addition to animals, there are human figures and hunting scenes giving a clear picture of the weapons used in those times.

Period III (Chalcolithic) Similar to the paintings of Chalcolithic pottery, these drawings reveal the association, contact, and mutual exchange of requirements of the cave dwellers

The figures of this group have a schematic and decorative style and are painted mainly in red, white and rarely green depicting riders, religious symbols, tunic-like dresses, and the scripts of different periods.

These paintings are geometric, linear and more schematic but show degeneration and crudeness in their artistic style.

Further ahead on the same path one comes across the Zoo Rock Shelter, which qualifies as the most densely painted rock shelter, paintings spanning from the Mesolithic to the Mediaeval.

Bhimbetka amazes not only because of its caves and rock paintings. In fact, numerous other archaeological remains which have been excavated are delightfully being savoured by both the archaeologist and the tourist. A trip to Bhimbetka is a journey into the past, and can serve as an adventure for the more discerning visitor.

A visit to Bhimbetka is akin to being transported into the past, while gathering wonderful insights into the psyche and actions of the man that inhabited these caves thousands of years ago. From the nomadic ways of the prehistoric man to a settled agricultural life, his interaction with the communities living in the plains and the gradual changes and adaptations in the crude lifestyle Bhimbetka paintings reflect all this and much more in vivid detail. These caves represent live documentation of the development of style, aptly seen in the myriad images painted on the rocks which, themselves graduate from being linear representation to more evolved shapes, depicting a variety of forms and images.

By Air: Bhopal (about 46 Km.from Bhimbetka) is the nearest airport connected with Mumbai, Delhi, Indore and Gwalior.

By Rail: Bhopal, on the Delhi-Chennai and Delhi-Mumbai mainline is the more convenient railhead.

By Bus: Bhimbetka, situated on the Bhopal-Hoshangabad National Highway No. 69, is well connected by bus.