Visit to the Bhimlat Prehistoric Rock Painting Site at Bundi

I had never been to a rock / cave shelter before (and read somewhere that how some are not easy to reach) so was a little apprehensive about its accessibility and my physical fitness :-D I kept telling my husband that he might have to go down into the ravine cave without me. Ultimately we left it for the final moment to decide, amen!

Rock Art / Cave Painting is a vast specialized subject and every now and then newer theories emerge basis on going research and studies. I had to do a lot of study and references before penning it down in the best possible way

Hence, before we go to the Bhimlat rock art, we will try and understand cave rock paintings briefly as a layman so that its easier for us to relate to them.

Cave paintings are painted drawings on cave walls or ceilings primarily of prehistoric origin. The rock art is prehistoric man-made markings on natural stone. Both belong to the wider Parietal art, the archaeological term for artwork done on cave walls or large blocks of stone. Its interesting to note that paintings / drawings were the oldest art forms used by human beings to express themselves with cave wall as the canvas.

Why did prehistoric people draw these pictures?

They may be beautifying their homes

They may be educating their people / children through these paintings

They may be communicating with each other through these drawings

They may be Shamanic art or expressions. There is a school of firm believers that the artwork of the caves are depictions of what our ancestors witnessed in their visions. The shamanistic element in the cave decorations is getting even more widely (though not universally) accepted

What are a few salient features of such paintings?

They are the greatest wealth the primitive humans have left behind

Animal figures are more prevalent than human figures stating the significant role of animals in the life people of those time. Early man was of a nomadic nature which meant moving from place to place in search of food thus they had to secure themselves from predator animals. At the same time animals were their main source of food besides wild fruits/ plants (agriculture was not a part of their lifestyle yet)

Colors used are mainly white, yellow, orange, red, ochre, purple, brown, green and black. White and red being the most used. These colors were made from various rock stone like red from haematite (known in India as Geru); green from chalcedony stone; white in all probability from limestone. The stone must have been ground into a powder and mixed with water and some sticky substance like animal fat, gum or resin from trees. Brushes would have been from twigs

At many rock painting sites there are layers of paintings one on top of the other. Either they were redrawn or people from different area, generation, time inhabited the same place

These prehistoric paintings help us to understand about early human beings -- their lifestyle, food habits, daily activities and thought process

Caves were used for ceremonial or magical rituals, which reflects in the art. It also might explain how religion originated

Understanding the Prehistoric Ages The drawings / paintings belong to 7 historical periods namely Period I or Upper Palaeolithic/Stone Age; Period II or Mesolithic; and Period III or Chalcolithic and thereafter Period IV & V of the Early historic and Period VI & VIl of the Medieval. Our focus will be on Prehistoric era art or rock paintings of Period I-III. (Also please remember that stone age is divided into 3 phases --- lower, middle and upper Palaeolithic age. Rock art came into existence only during the upper phase)

The drawings were mainly of human figures, their activities, some geometric designs & symbols

Paintings were in dark red of huge animal figures like bison, tiger, elephant, rhino and boar beside stick-like human figures

Largest number of paintings belongs to this period

Though the subjects in paintings increased the size became smaller

Hunting scenes predominate along with images of trap / snares they used to catch animals. Hunters are seen in groups armed with barbed spears, pointed sticks, arrows and bows. In some drawings animals are chasing men and in others they are being chased by hunters.

It is characterized by more advanced hunter-gathering, fishing and rudimentary forms of cultivation.

Many rock/cave sites in India belong to this period

Pottery and metal tools find a place in the drawings. Painted pottery is a mark of the Chalcolithic period.

There is a growing belief that a high percentage of rock art is of a shamanic origin i.e. shamanic experiences led to the sudden development of art, symbolic thinking, and early civilization

While planning the trip I looked up for these cave rock paintings (a fellow travel blogger had mentioned them) and it lead me to Om Prakash Sharma, popularly known as Kukki. The Bhimlat site is just one of the 100+ rock art sites, discovered in the Bundi-Bhilwara-Tonk area of Rajasthan, by this simple 8th Std dropout Bundi resident.

All this has been done by him without any support or funding. The driving force being an inexplicable "mad passion"or "fitoor" or "junoon". The rock paintings discovered by him are from different ages like mesolithic, chalcolithic, metal ages and even prehistoric. The exact period / age of these paintings can only be accurately deciphered once excavation is carried out and carbon dating is done. As of now, it is said that some belong to an era more than 15000 years ago. These rock paintings are mainly found in hilltops, cavities in rocks and small caves along the Chambal river.

Coming back to the Bhimlat rock painting, we were on this long informative walk through the dry plateau forest area of Bhimlat bordered by deep rocky canyons. We stopped to see a demonstration on making of different colors from different stones; making of a brush to paint and making of images like those found in rock painting.

We continued our walk and then halted at a spot, which could be easily missed by any passer by. There was a pile of branches / twigs lying on what seemed the edge of the plateau. To our surprise, Mr. Sharma started to remove them to reveal a rocky opening to the 'site'. It took me sometime to gather my strength to get down that opening. Once I did it, all was fine .... the rock shelter in the 200+ ft deep seemed pretty adventurous and interesting. 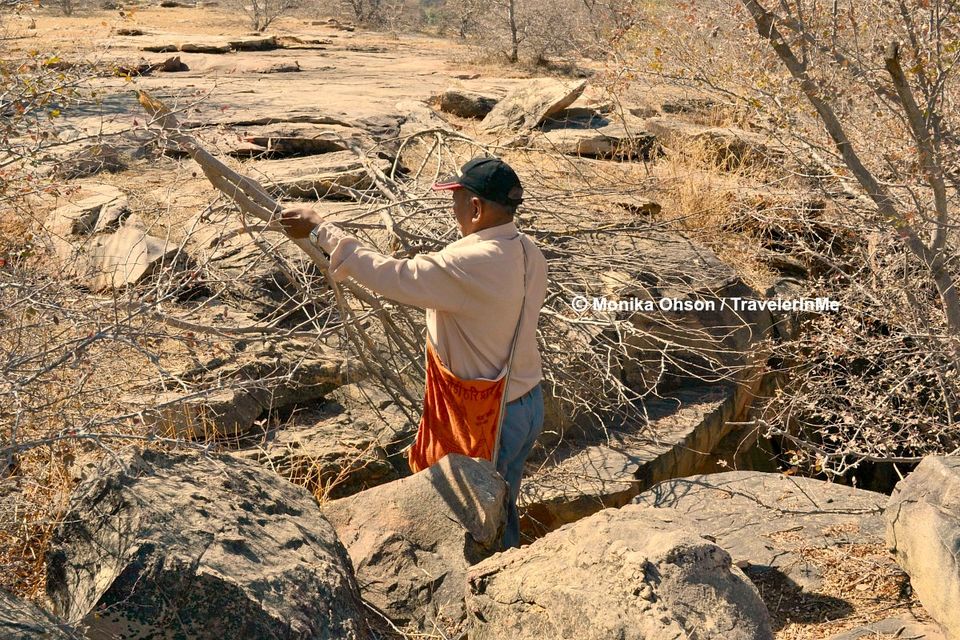 In the rock shelter we had the first experience of seeing prehistoric rock art! The gyaan shared above will now help you all decode / understand the paintings. I have numbered some drawings to ease figuring it out basis the description shared (some drawings are now very light so may not be easily recognizable)

Om Prakash Sharma (Kukki) with one of his many discoveries, the Bhimlat Rock Painting site 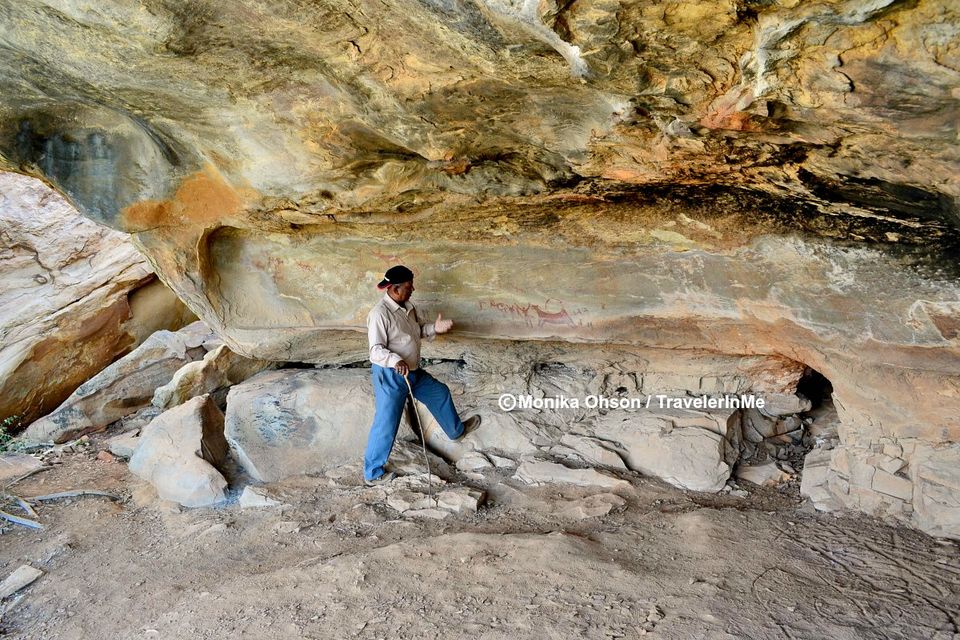 Kukkiji shared with us the interesting way he discovered this shelter way back in 2003. He kept seeing this place in his dreams and one fine day he went back again to this spot. There was nothing visible on the rocks but something about the dream did not let him give up. He took water from a bottle he and his friend were carrying and tried cleaning a portion of the rock. Lo and behold it revealed some drawings which at that point neither understood! 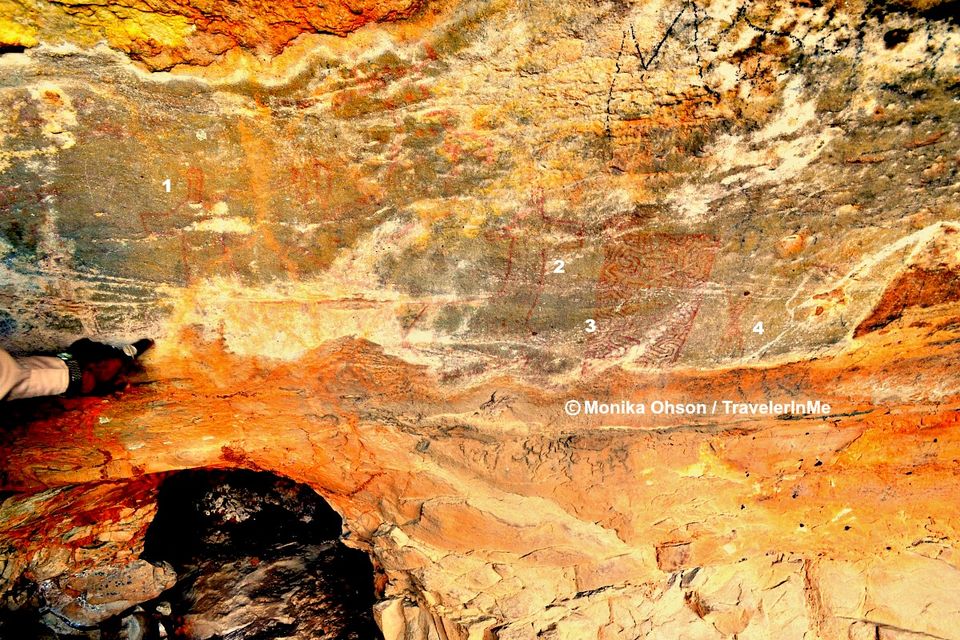 This drawing shows two Neelgai /Asian antelope (Drawing 1&2) back to back. A leg of one of the antelopes (Drawing 2) is caught in a mesh/trap (Drawing 3). The Hunter in a joyous mood (Drawing 4) 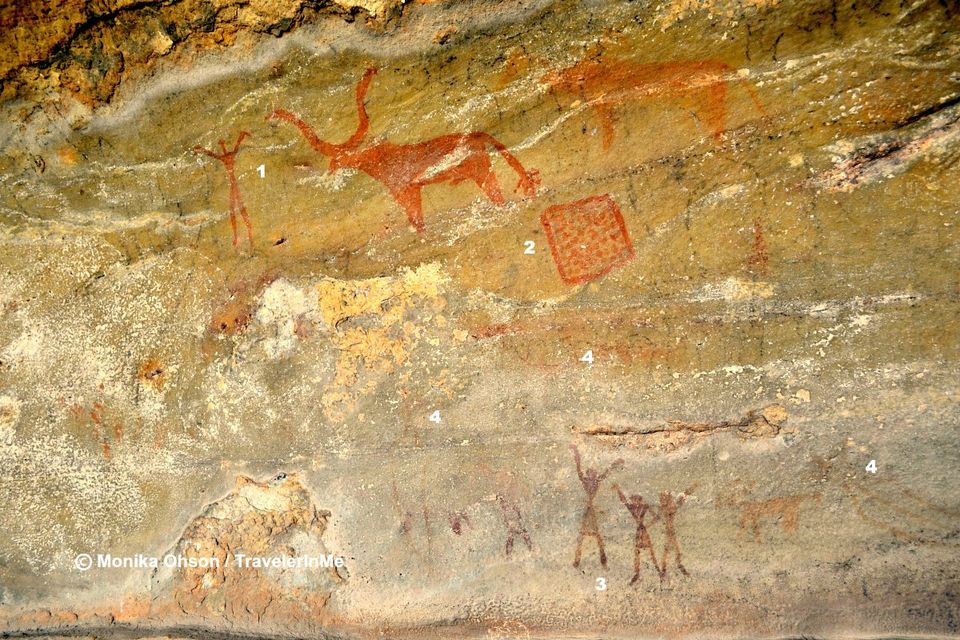 In Drawing 1, a tall man (maybe of an African origin basis height) is seen along with a humped bull. Drawing 2 is of a fishing net. In Drawing 3 we can see people in clothes probably dancing. Drawing 4 (three of them) are those of daggers. This might be the Chalcolithic stage and thereafter (ref clothing, metal daggers etc)

In this set Drawing 1 depicts a probable hunting scene or depiction of art of hunting. There is a man with bow and arrow along with a man with lasso trying to hunt an animal. There is another man trying to scare off an animal. 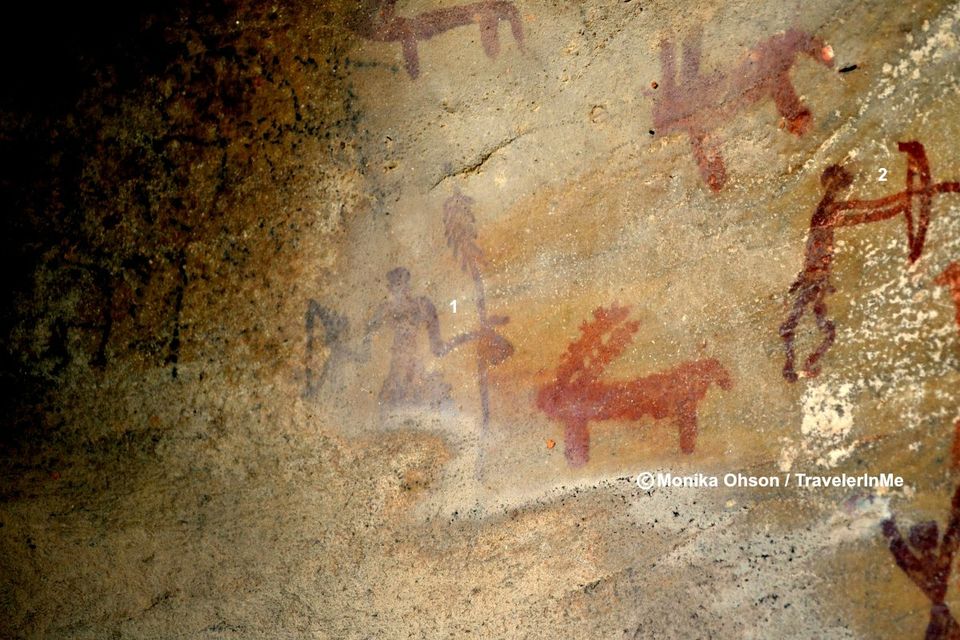 Another aspect about the man with the bow an arrow (Drawing 2), as shared by Mr Sharma, is that he is scared as his legs are shaking. Drawing 1 throws a light on the practice of shamanism by the prehistoric man. The image is probably of a shaman holding a staff /spear, a bow-arrow and a bag that may be having ritual ingredients / magic potion. 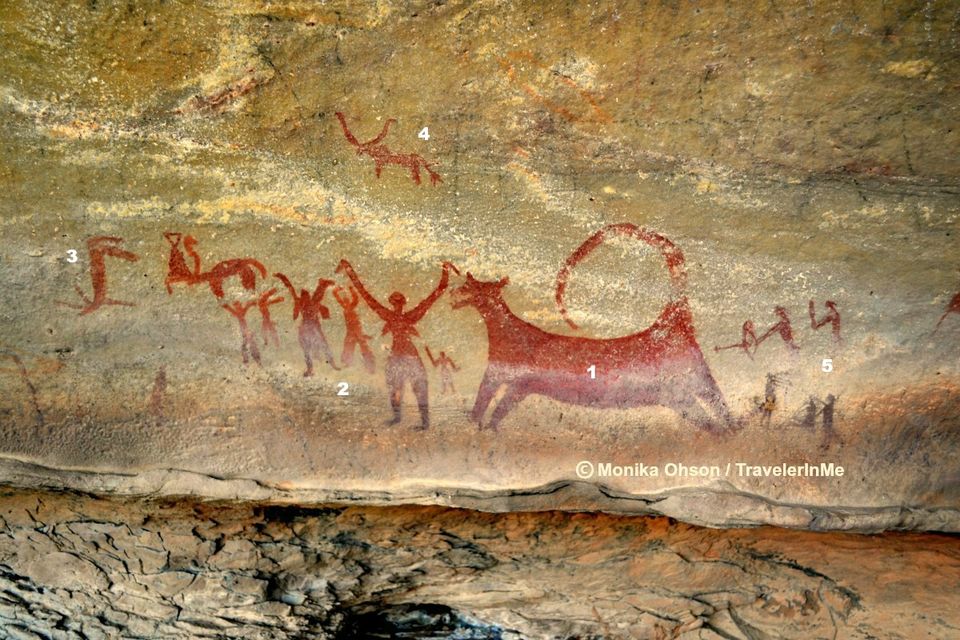 This painting is the clearest. Drawing 3 is of a dead / hunted animal which both the people (drawing 2) and tigress (drawing 1) want to eat. Their pose may be interpreted in two ways - one, they are dancing with joy after the hunt which means food; two, trying to scare off the tigress who has come to eat the hunted animal Again note the height and body structure of the woman right in front of the tigress. She is probably of an African origin. Another thing that reflects in drawing 2, is a couple of human figures perhaps wearing some animal skin over their shoulder. Drawing 5 shows the huntsmen probably chasing the tigress to kill her.

Drawing of a spotted deer 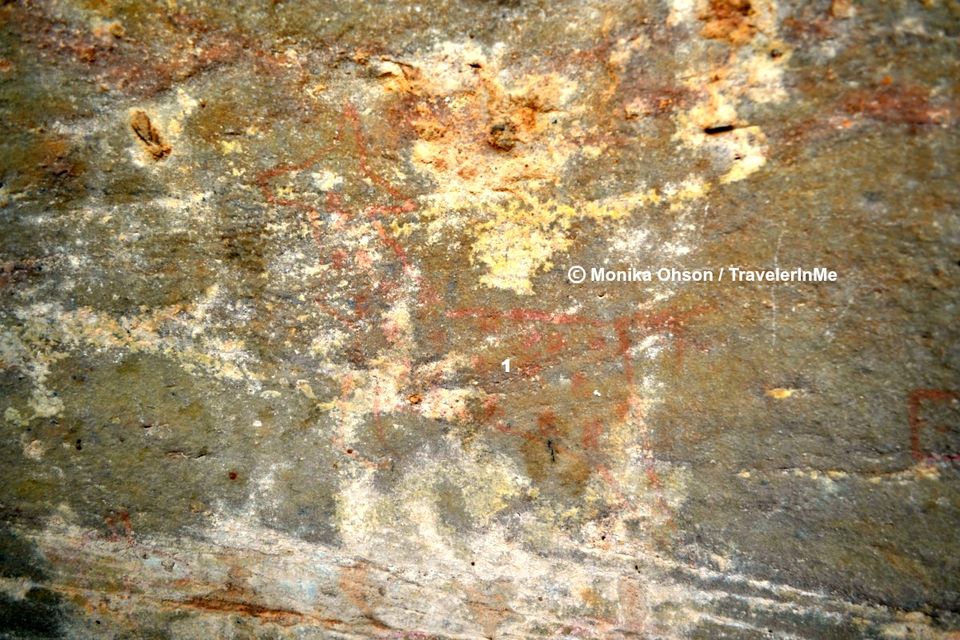 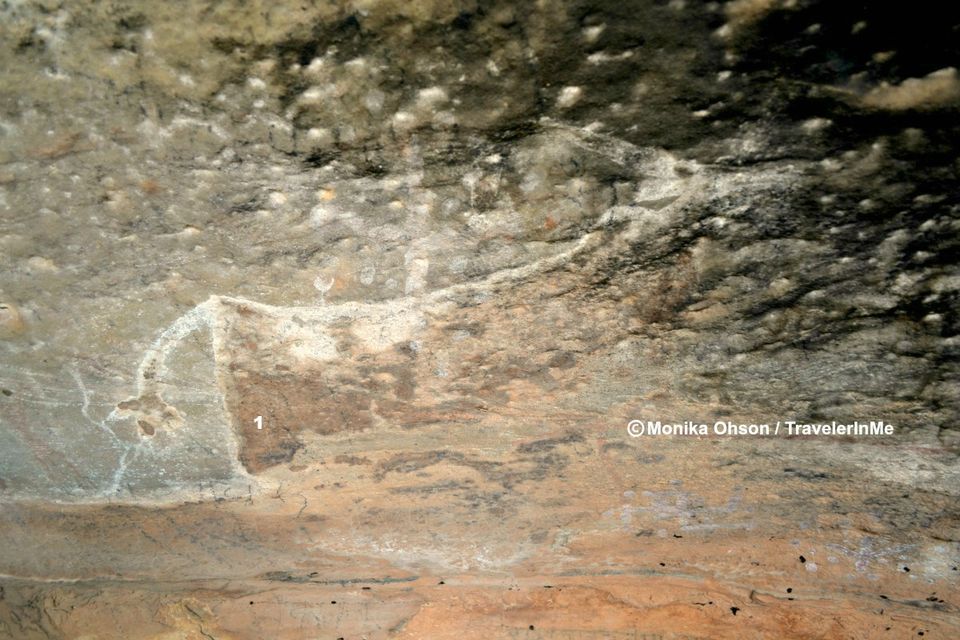 This experience not only introduced me to rock art but also enriched my knowledge about it. I hope to see more such sites in India belonging to different era !

Om Prakash ji is doing his bit to keep the place safe from human interference (remember camouflaging of the entrance shared earlier?) so that the drawings remain intact for a longer time. Unfortunately, owing to its easy accessibility more often than not one can see signs of people visiting and shamanism being practiced. If you refer to the bovine figure in white, the rock roof is covered in soot. We found the remains of bonfire and earthen diyas there. While talking about his rock paintings on the whole, he shared that some paintings are clear as they are well sheltered naturally and safe from human interference. Then there are some that are pretty faded and you may need to strain your eyes to see them. This is because the natural vegetation coverage is no longer there and there is proof of people visiting these shelters as its accessible.

Important to note is, though these sites have been shared / visited and documented with the relevant organizations there is still no conservation being done.

Kukkiji has been awarded by, the then President of India, Mrs. Pratibha Patil for his contribution in discovering more than 76 rock painting sites. The Archaeological Survey of India (ASI) is said to have given him the status of an ‘honorary archaeologist‘ for all his pursuits and priceless discoveries.

He has also been recognized by National Center for the Arts, New Delhi & World Rock Art Society from France for his work. His findings / discoveries are documented by the Indira Gandhi National Centre for Arts, the Indian Rock Art and Research Centre, Nasik, and the State Archaeological Department, Jaipur. There are numerous coverage of his rock paintings shelters in the print media. In fact, it is said that the well known rock painting expert, Mr Ervin Neumayer from Austria, had verified the sites at Bundi. 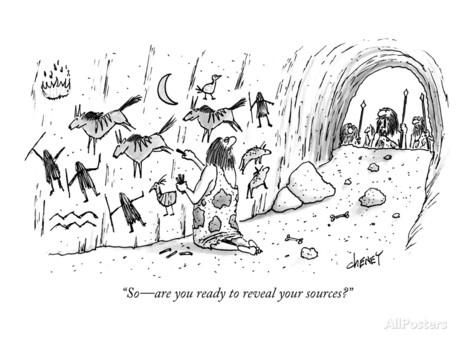