Indians are one of the very few nationalities allowed into Bhutan without a visa and on a pre-arranged tour. However, one must obtain a permit, easily available in Phuentsholing, for five days, extendable only in Thimpu. Carry photocopies of all your documents and keep your permits with you at all times. They will be stamped at every check post.

How I got to Bhutan:

Flight from Goa to Calcutta, train to New Jalpaiguri, rickshaw to Siliguri, bus to Phuentsholing

Paro: Hotel Peljorling (the walls don’t quite keep the cold out and the bathroom is a bit dingy)

Pork (with lots of fat)

Chicken rice with cheese and chillies

For more information you can check out my blog www.diellesdoodles.blogspot.com

The hotel was cheap, decent (ish) and served by a restaurant downstairs. We got a ride to Taktsang the next day. At the base of the hill were the obligatory souvenir stalls selling prayer beads, flags and other knick knacks. Piles of pony dung peppered the rocky ground and the pungent smell of the animals and their faeces hung in the air.A 40-something European gentleman and his wife were selecting rides. We were young and full of vigour; surely we weren’t going to take the ponies to the half-way mark. Five minutes into the walk and I thought, ‘hell, this is easy’. Then came the uphill climb. While it was nippy getting there, I ought to have been smart enough not to wear my sweater. After all, exercise does make you work up a sweat. I bore it out.The path was probably hewn into the rock over the ages. Taktsang or ‘Tiger’s Nest’ Monastery was built in the 1694, but held sacred for centuries earlier. Legend has it that the revered Guru Rinpoche flew to this location on the back of a tigress to meditate sometime in the 8th century. Seated precariously, on the edge of the cliff-face, the monastery with its four main buildings, chortens and caves, was rebuilt after a fire in 1958.Taktsang through the treesWe plodded on. Up ahead, the European gentleman was not on his pony anymore, but instead behind it, urging it forward. On and off he would climb onto its back, helped by the guide, but the pony seemed to want the day off.Between the trees on certain turns of the path, glimpses of Taktsang peek at you. It’s a good way to motivate you on, particularly if you start having second thoughts about the walk. Soon, we were at the little restaurant where you can tank up with water and a bite. The next point at which you can get the strange tasting butter tea the Bhutanese love is at a little kiosk run by a toothy, smiling old lady along the steps to Taktsang (It’s free and served out of a mug).The road gets nastier here. I realised how much more fit I needed to be (or turn miraculously into Heidi of the hills) as elderly Germans passed us with their hiking sticks, a senior Japanese lady bent forward to tie her shoelaces and continued on, and Bhutanese pilgrims raced by with barely a heavy breath.We strung up our prayer flags, took a few mandatory pictures and began climbing down the stairs. Already I was dreading the walk back. Stairs have never been my best friend.But the view from Taktsang is worth every uphill climb, every second thought, every penny spent getting to Bhutan. Chilly wind from the valley whips at your face, threatening to tear off your nose. The wood panelled rooms are comparatively warmer, and because you were on too tight a budget to afford a guide, you sidle up to the ones speaking English and catch snippets of their stories.As usual, I got lost, roaming room to room for at least half an hour before I was heated up enough to grunt ‘where the hell were you?’ when I finally found my travel buddy at the ‘Personal Belongings’ desk. We chatted with the sentries, who like most Bhutanese were dressed in traditional ‘gho’s.We trudged back up the stairs, stopping to take pictures by the waterfall as a web of colourful prayer flags fluttered maddeningly in the wind. I couldn’t help but wonder how they tied them across cliff faces like that.The Dzhong we saw the previous day had nothing on Taktsang. Sure it was beautiful in its own right, majestic and royal with its pretty wooden bridge across the pebbled river and gilded tops. Truth be told, visiting Bhutan had always been a wish, but it was Taktsang that actually yanked me there. 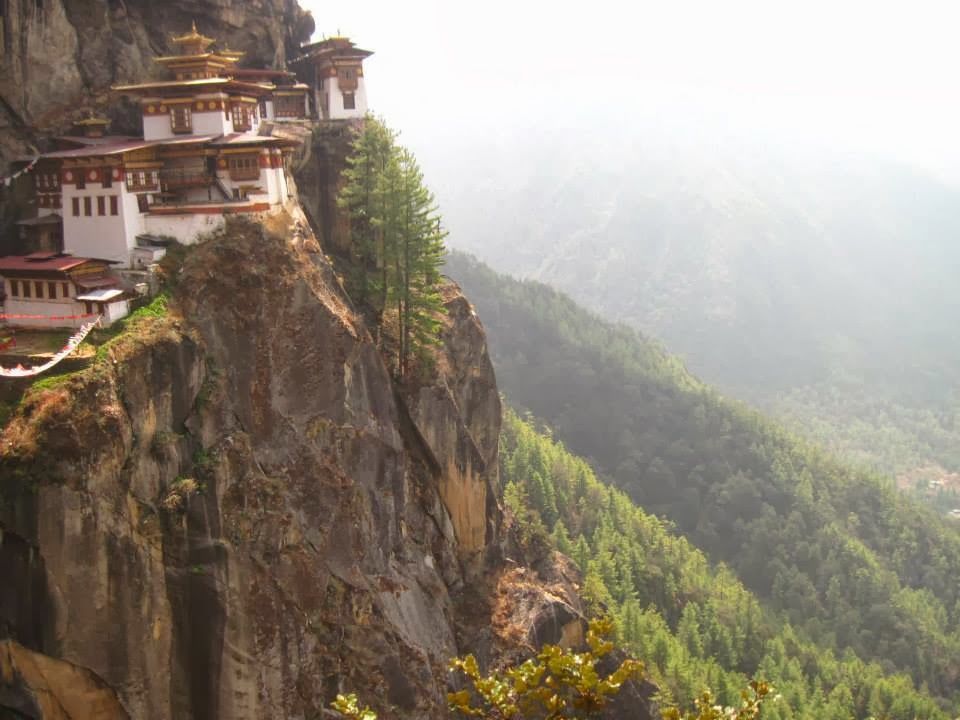 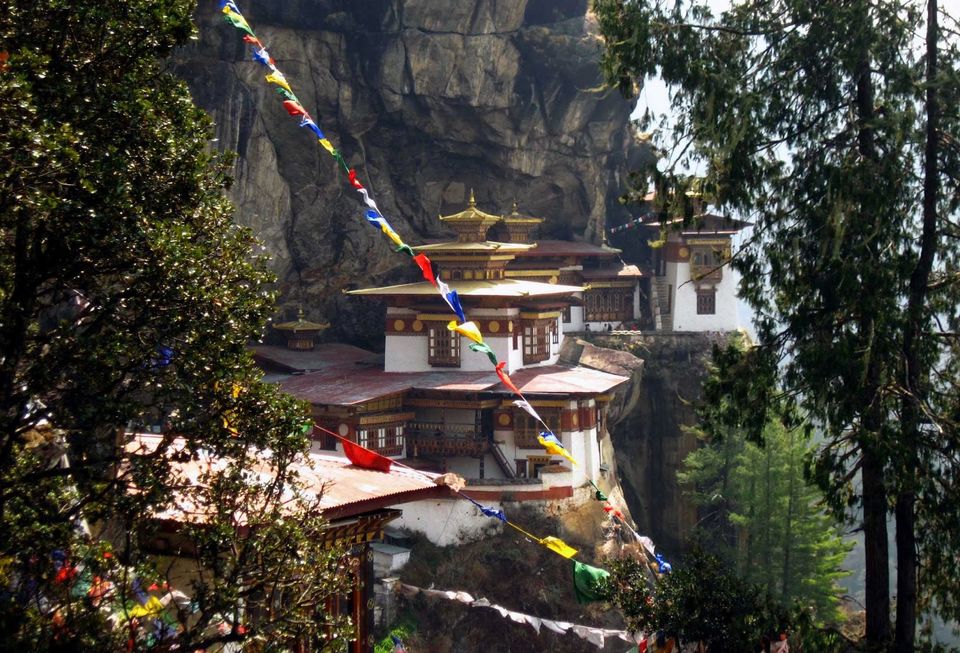 Paro: Hotel Peljorling (the walls don’t quite keep the cold out and the bathroom is a bit dingy) 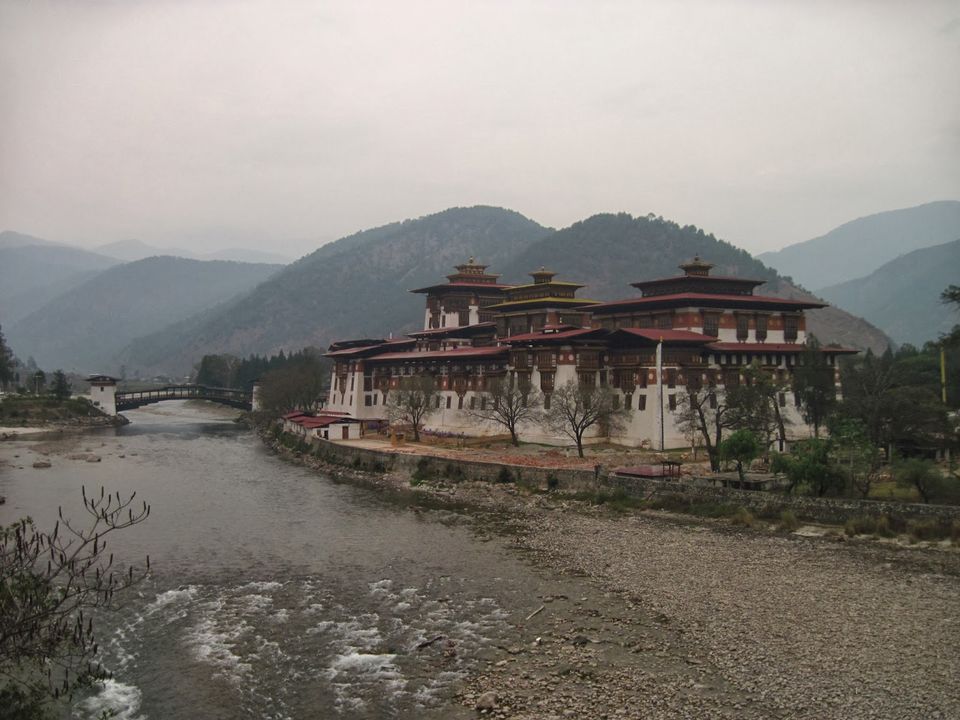