Your daily dose of happiness: Bhutan

Someday I’d love to move to Bhutan, and never come back.

Walking up the last few steps to the Tiger’s Nest, I cannot bring my brain to recover from what I just achieved. I have to call it an achievement because I never thought I’d make the trek to Taktsang Lhakhang, better known at the Tiger’s Nest.

Legend has it that Guru Rinpoche flew to this site on a tigress’s back to destroy a demon, and thereafter meditated there for three months. With every curve of the mountain, via the winding road, the air gets thinner and the climb more rigorous. With the sun in your face one minute and the breeze taking your breath away in another, its humbling to make the ascent, all 3000 feet of it. With prayer flags and a giant prayer wheel along the way, the trek apart from being physically strenuous, is also emotionally challenging. We urban folks aren’t used to this kind of activity. Climbing up hill for over four hours, with about 1000 steps that take you up to the monastery and downhill for over 3 hours with the biting cold for company, you’ve got to pat yourself on the back, for making it up there.

If I could think of one visual that would stay with me forever, it would be looking down the mountains from the Tiger’s Nest. You forget about those aches and pains. You’re thankful. You’re humbled. You’re simply, in awe.

Bhutan had been on my list for as long as I can remember, and yet again when it came to planning the trip, it simply happened. I was lucky to have seen both sides of it, with the bone numbing cold and the much loved pleasant weather with the sunshine tickling your face. With low temperatures in December, Bhutan gets really cold in the winters.

The land of the Thunder Dragon as it is fondly called, Bhutan is majestic. With its very distinct architectural style, intricate wood work with folklore etched into facades of buildings, bright colours and a sense of grandeur when it comes to both- the people and the architecture.

Being a fan of road trips, we decided to drive from Bagdogra to Phuentsholing (your first stop), to enter the Royal Kingdom of Bhutan. One can sense the shift in the air. The air is a lot cleaner, no noise from car horns, families with playful younger ones sit and chat in the park while tourists walk about the small town getting their permits, grabbing a bite at Kizom- the local café.

As we drive further towards Paro, you realize that food, especially fresh vegetables and other produce play a very important part when it comes to the locals. Long winding roads have small stalls selling vegetables and fruit along with a delicacy made of yak milk “chuppi”, not to forget Bhutan’s world famous chilies- red, green, freshly grounded, dried…name it and it’s there!

It all looks like a beautiful movie set but this is how the country really is steeped in tradition and more than happy to embrace it. The Bhutanese dress in their traditional outfit- the Kira for women and gho for men. With their fabulous skin and welcoming smiles, it’s hard to miss the positive vibe the country emits. Bhutan measures the country’s growth in GNH- Gross National Happiness Index instead of GDP or economic growth. The aim is for the Bhutanese to be extensively or deeply happy. Wow!

We drove to Punakha from Paro, via the Dochula Pass. Not only does one see a 360 degree view of the Himalayas but the mountains act as a stunning backdrop to the 108 Chortens gracing the mountain pass. Known as the Druk Wangyal Chortens- the construction of these 108 Chortens was commissioned by the eldest Queen Mother, Her Majesty Ashi Dorji Wangmo Wangchuk in memory of Bhutanese soldiers killed at war.

Aquamarine waters and the clear blue sky dominate the landscapes. Standing at the confluence of two major rivers, Mo Chhu and Po Chhu, Punakha Dzongkhag or the Palace of Happiness, is by far one of the most stunning architectural structures I’ve ever seen. Once the Palace of the King of Bhutan, the Dzong now serves as the Winter Capital for the monastic body of the country, presided over by the Je Khempo (the religious leader for the country).

The suspension bridge connecting Punakha to other small villages, gives one a stunning view of the mountains with the Pho Chhu River flowing right under.

Evenings are really quiet. You want to sit by a balcony, watch the sun go down. It’s a watercolor painting coming to life. With the echoing sound of the prayer wheel and the constant hum of the wind, you’re left with your thoughts. Perfect indeed.

Our last stop is Thimphu, the capital and largest city in Bhutan. As we drive down into the city, it’s hard to miss the gigantic Buddha statue up in the mountains. Standing tall at a 169 feet and made of bronze and gilded gold, this one is a must see.

The main town is charming to say the least. With a large town square with people pausing for a quick chat with friends or just for some good old soul searching, most public events take place here.

I’m amazed to see that Thimphu has no traffic signals and there are still traffic policemen gracefully directing traffic. They are very strict about traffic rules though, one must and absolutely must use the zebra crossing or simply walk back to one, from wherever you are. Yes, I learnt this the hard way.

Shops line up the stretch with handicrafts, incense, and the very famous Thangka paintings. The food, it makes you pause and relish each and every morsel! Ema Datshi (chillies and cheese) or some dal and red rice. While you get almost every cuisine in the city, it’s Indian, Chinese and Bhutanese food that rule most restaurant menus.

As I stood just looking up at the clear blue sky one morning, I knew that I would have to come back. There is too much to soak in, too much to experience and Bhutan thankfully, is in no hurry.

With its people enjoying every minute, savoring each moment. Where happiness is the ideology of a nation, steeped in spirituality, it’s hard not to find your happiness quotient. 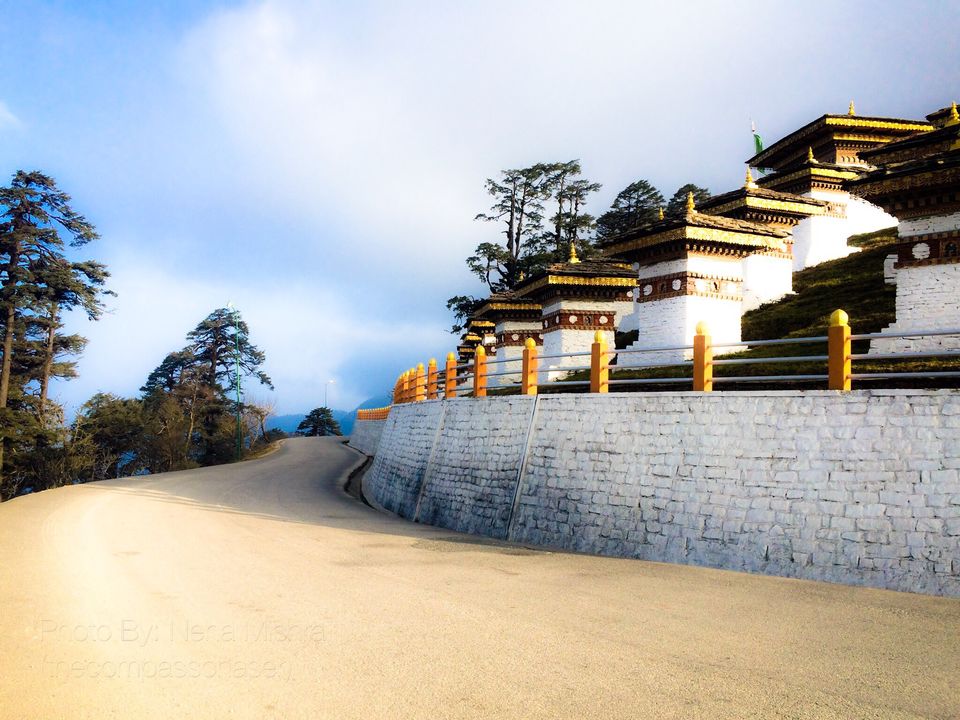 The view from my room in Paro 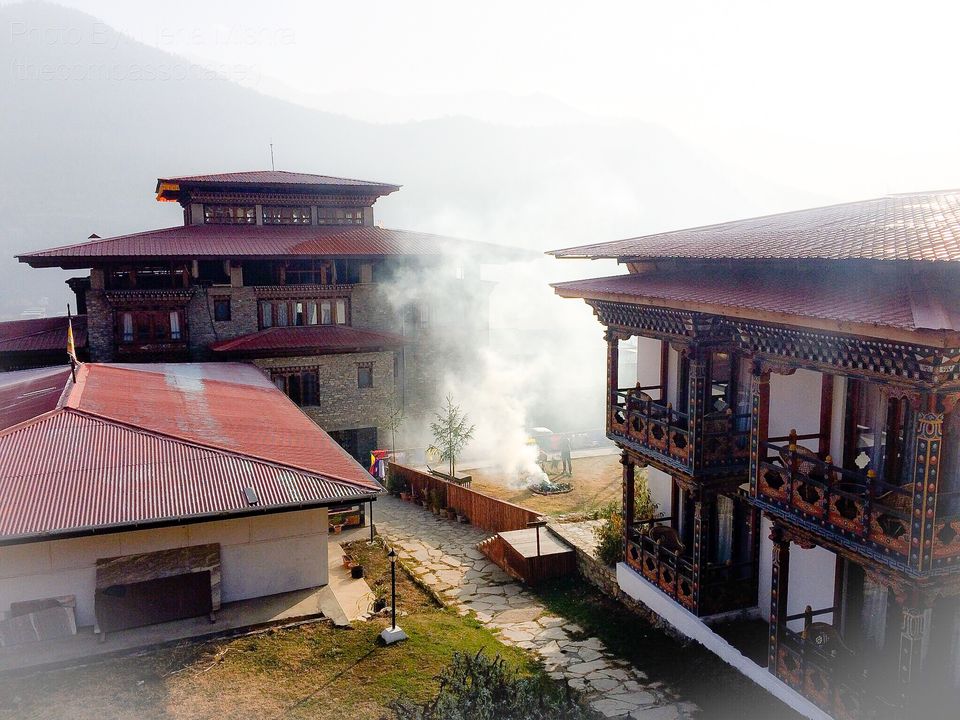 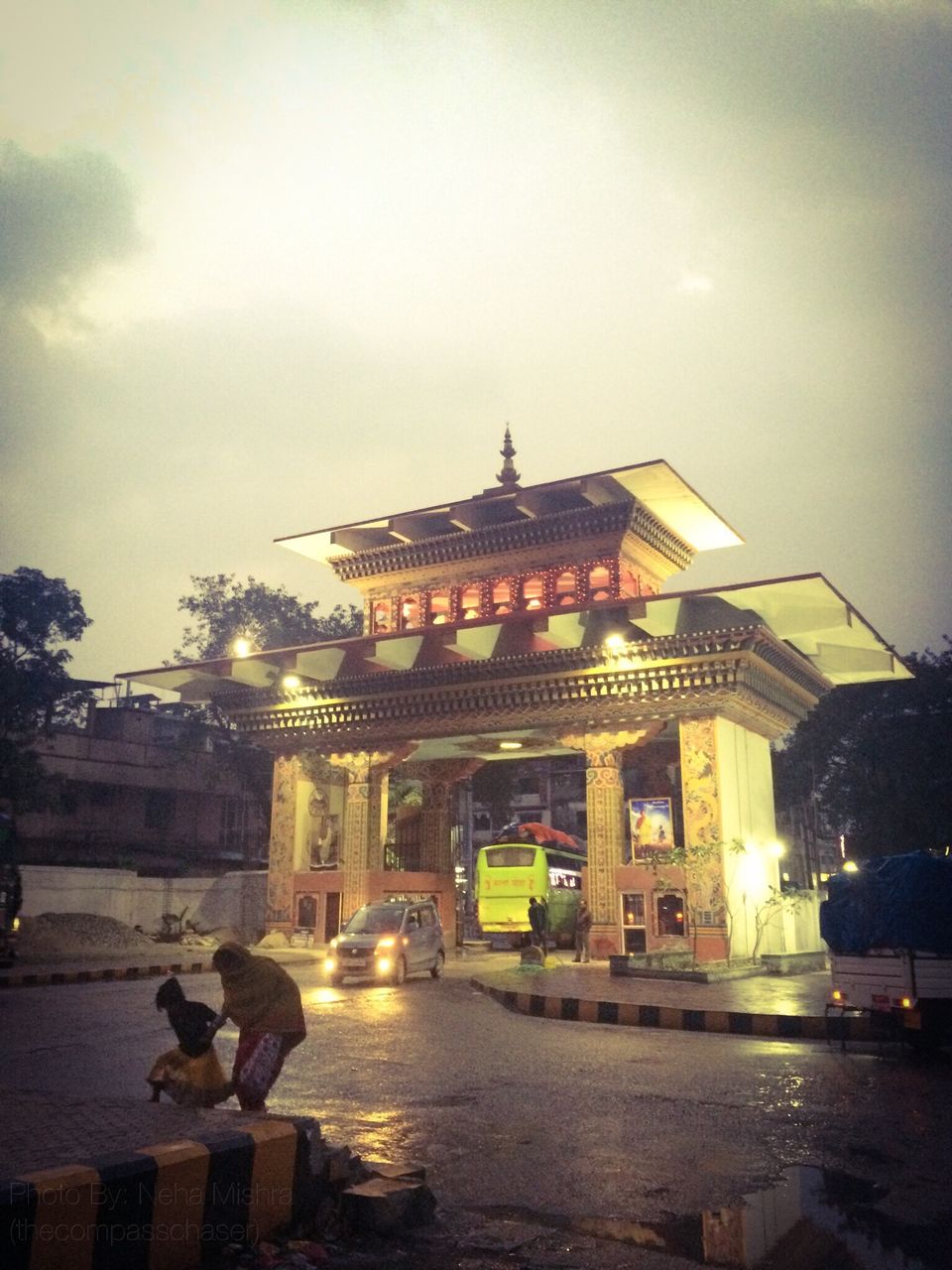 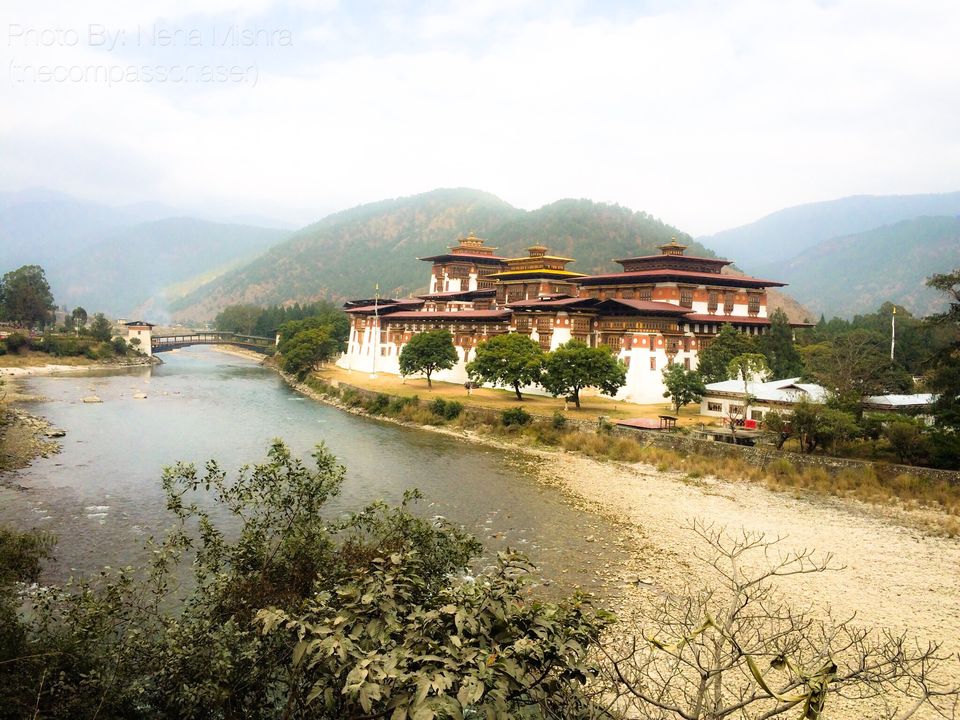 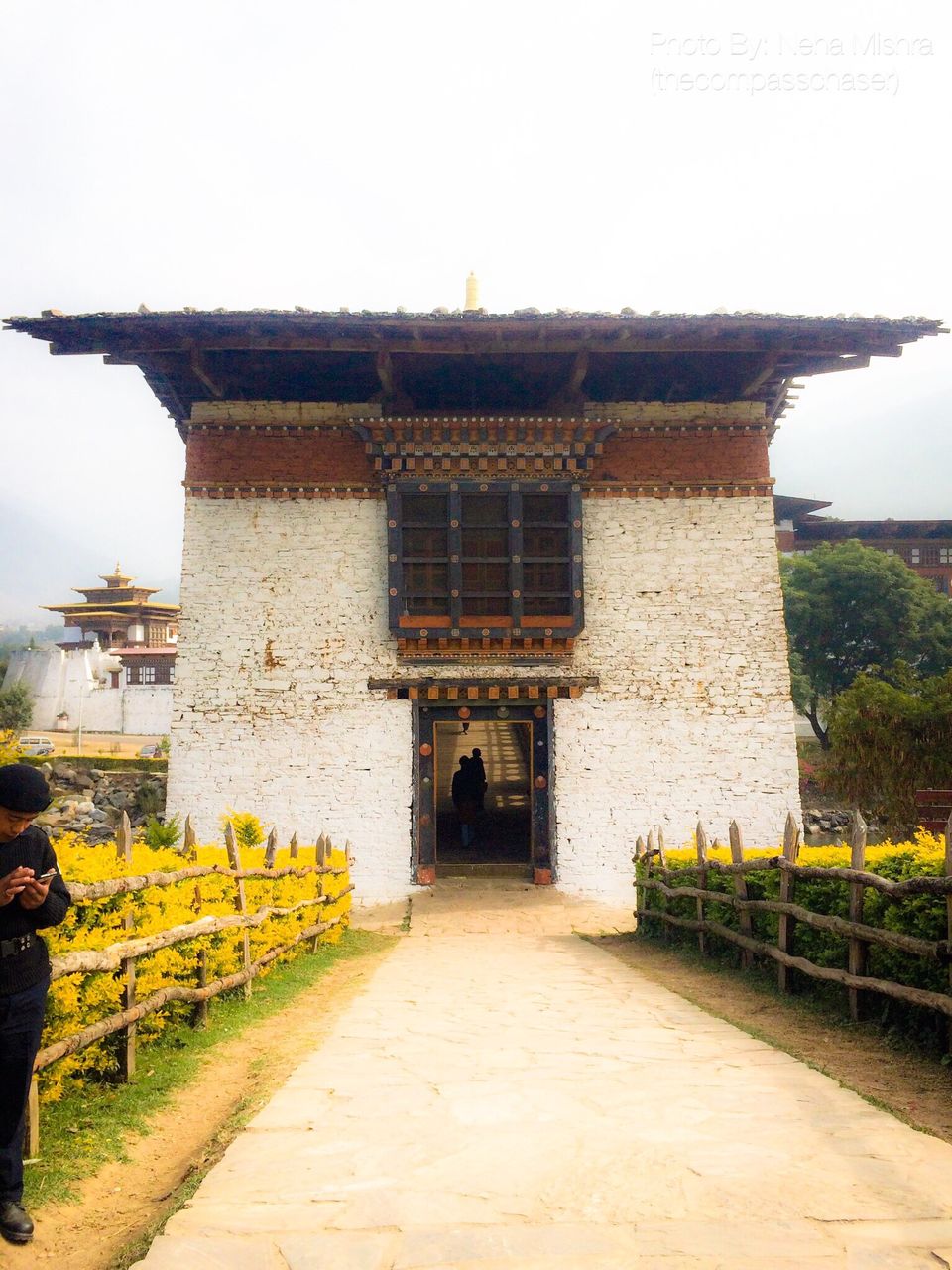 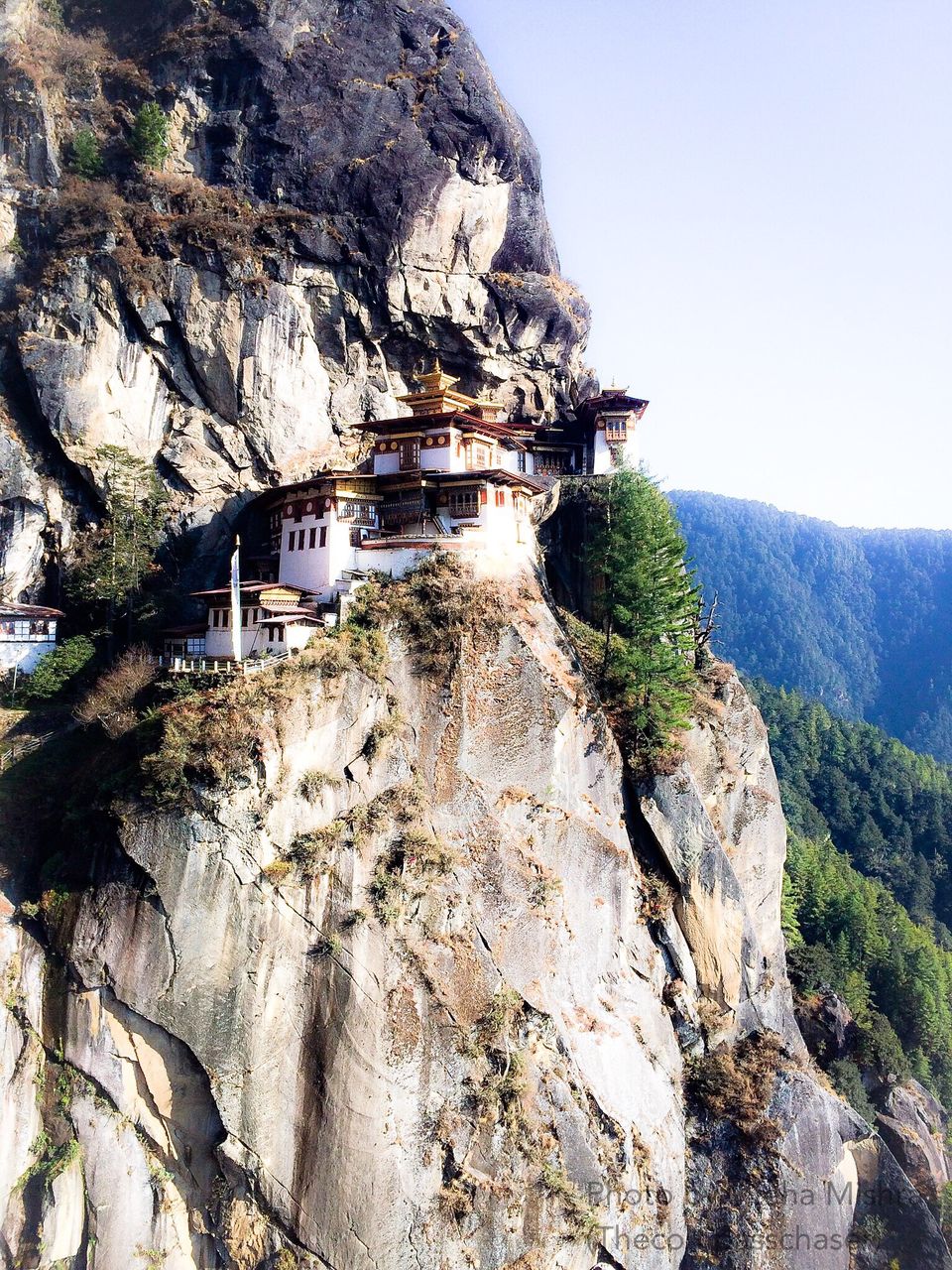 The Buddha Dordenma statue in Thimphu 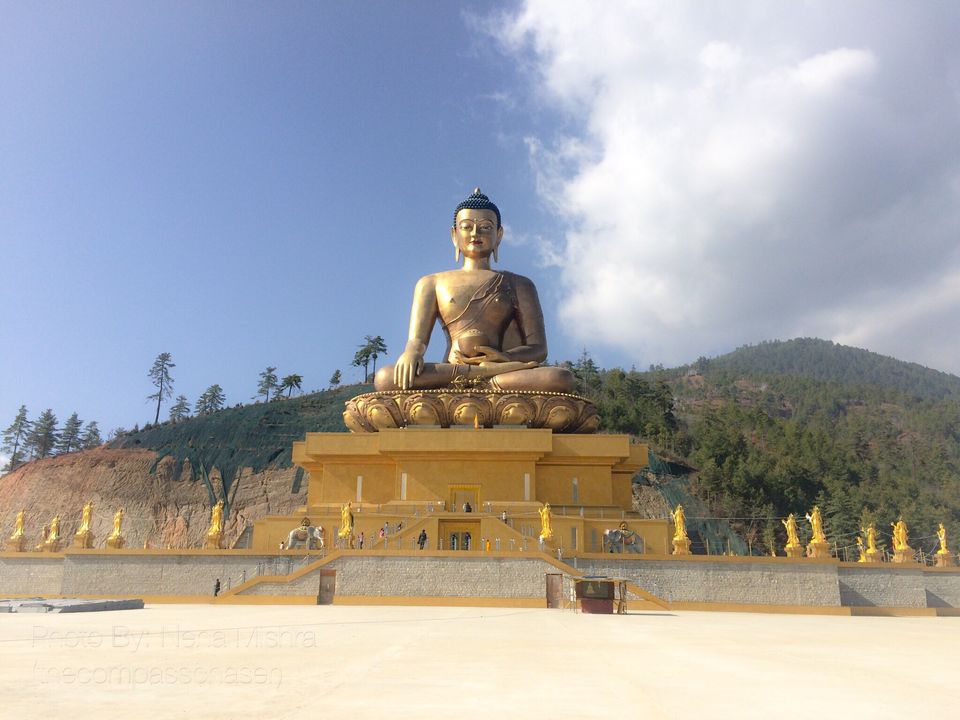 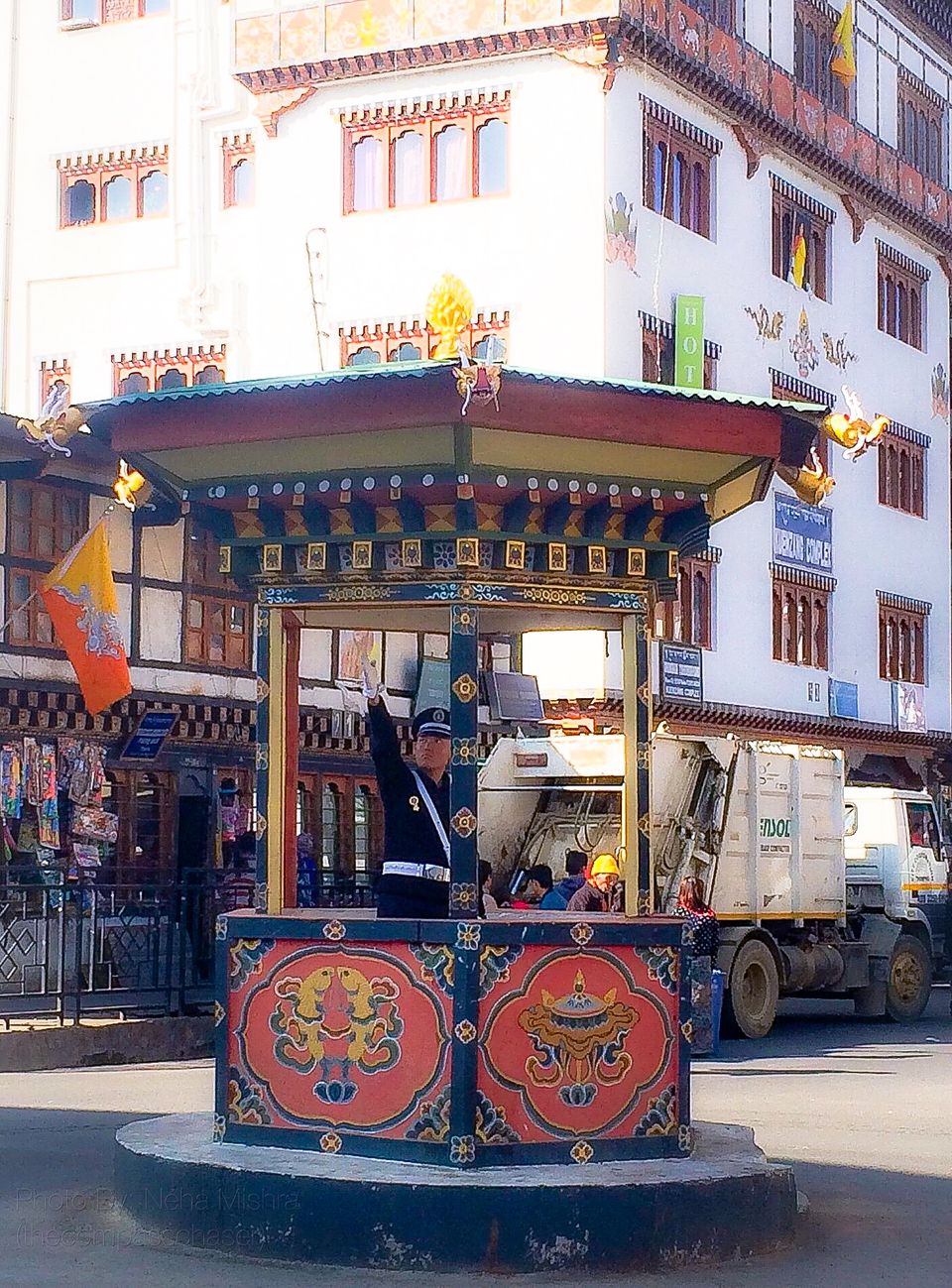