Bhutan is a country where a smile is more valuable than the money in your pocket, where Gross National Happiness which works on the four pillars of preserving and promoting national culture, preserving the environment, sustainability and good governance is used for reviewing policy decisions and allocation of resources, and this is reflected by the people there who are very kind, generous and happy.

Bhutan lies between India and China two biggest countries of Asia and whose economy mainly depends on selling hydro power electricity to India has a cultural identity of its own, although its national language is Dzongkha almost everyone can understand Hindi and English. People respect their culture and tradition and you can find everyone in their traditional dress, men wearing “gho” which is a knee length robe tied at waist by a belt known as kera, and women wearing “kira” which is an ankle length dress, wrapped and folded around the body and is worn with “wonju” a long sleeved blouse.

Host to some of the most difficult treks in world Bhutan is home to some of the highest peaks. If you are not an Indian or Bangladeshi you will be charged $250 per day to awestruck by the beauty of Bhutan. It’s not that Bhutan doesn’t support tourism, it is one of the major sources of their income but they want to keep their beauty and culture intact and preserve Bhutan as a marvel in today’s world.

We arrived in Bhutan from Jaigaon which is about 27 km from the nearest railway station Hasimara in West Bengal. Just after crossing the border, there is a visible contrast and one can find themselves in a new world where streets are not littered, there’s no overcrowding and everyone is happy enjoying their life and helping others. Being an Indian resident there were no VISA formalities for us we easily got a permit to explore Bhutan for 6 days by producing our passport or voter id card. There were a lot of taxi which you can hire or share to travel to Thimphu the capital of Bhutan and the drivers are so helpful that they will not hesitate to drop every one of you to your respective hotel. We started from Phuentsholing to Thimphu at around 4 o’clock after exchanging our currency to Bhutanese ngultrum, which is 5 hour drive and stopped at D2K restaurant in between to have a bite of tasteful Bhutanese dishes, and thus started our journey to dig into the land of Thunder Dragon.

Thimphu is the capital of Bhutan and the most developed Dzongkhags (District) in the country. Although it is the biggest and busiest city of Bhutan you can call it the most pleasant capital in world. Spread over an area of around 1,843 square kilometers and inhabiting 1,00,000 people you might think Thimpu will fail to give you true essence of Bhutan, amazingly thats not the case. Bhutanese have done an extraordinary job in conserving their tradition and culture.

We stayed at Hotel Ghasel in Thimphu which is opposite to clock tower which we came to know when we enquired about clock tower. Started at around 10:00 in morning according to Bhutanese time which is around 30 minutes ahead of India we headed for breakfast at hotel NTe.

We started our day from the taxi stand near the clock tower and booked a cab for local sightseeing as the only way to explore the city is either to walk or by a cab. We decided to start our day from National Memorial Chorten. It is one of the most visible and famous religious structure in Thimphu where many monks come to offer their daily prayers with a prayer wheel spinning it in clockwise directing praying for health and internal peace. Afterwards we moved to Buddha point to have a look at the magnificent Buddha idol of 169 feet (51.5 meters) tall, the largest Buddha structure in world.

After the incredible view of Buddha point and the awe-inspiring view of Thimphu from there we decided to move to Kuenselphogrand Nature Park which is just 5 mins walk from Buddha point where you can climb up the mountain to see the beauty of Thimphu, later we moved to Changangkha Lhakhang the oldest temple in Thimphu. Finally we decided to take a break for snacks and then started from Motithang Takin Preserve which is a wildlife reserve area for Takin the National Animal of Bhutan, some years ago all the animals were released in the wild as the fourth king decided it was not in keeping with Bhutan’s environmental and religious convictions and now you can only find Takin in there. Then we decided to visit the Institute of arts and crafts which was closed unfortunately and so we headed to folk heritage museum which is a 2 minute walk from the Institute. Museum is its true sense a heritage museum which is a four story building and each of its room is displayed the way people used to live in ancient time. Unluckily National Library was also closed and so we decided to call it a day at local Thimpu market which is slightly costlier that Paro to understand more about Bhutanese culture.

My favorite day in Bhutan was the day we got up close and personal with Tiger’s Nest Monastery or Taktsang Monastery which is the small white building in the picture. First time I saw a photo of Tiger’s Nest Monastery while searching for the places to visit in Bhutan, I was amazed by its beauty and specifically its location. The Tigers Nest Monastery is built at a height of around 10,200 feet from the sea level and it’s difficult to imagine that such a Monastery was build back in 1692 by Gyalse Tenzin Rabgye. It is believed that Padmasambhava (Guru Rinpoche) flew to this location on the back of a tigress where he meditated for three months and subsequently defeated the local demons and begin the spiritual rebirth of Bhutanese to Buddhism .

Tigers Nest is a two hour climb from the valley floor which is as 7000 feet above the sea level, you can also take a horse ride for two third of path which will cost you around 600 Bhutanese Ngultrum. As one climbs the well maintained but stepped track the Monastery seems to appear and disappear between the trees and mountains. In two hours of slow long climb and you see some magnificent views of Paro and Tigers Nest in between, encountered with lot of shrines, you will also see wind-horse flags and many mini chortens left behind by devotees on their pilgrimage to the Tiger’s Nest monastery. Although there is a tea-house along the way i would recommend to carry a water bottle and a little snacks.

After around 100 minutes of climbing you get a clear view of Tiger’s Nest a prominent Himalayan Buddhist sacred site. From there your journey comprises of a long flight of stairs which descends down to a bridge and then ascends to Tigers Nest Monastery. Once you reach Monastery you will have to deposit all your cameras and mobiles and have to capture the breathtaking view through your eyes and once you have a look you will not ask for pictures to remember the stupefying scene. Luckily we reached the monastery at 12:45 which closes at 1:00 and were the last group to enter. After spending around 45 minutes we stared to go back from where we started, keep in mind that there are no horses to take you back as it is too dangerous for both riders and horses.

The entire experience of the Taktsang Monastery Tiger’s Nest is fulfilling and challenging where you are rewarded with beautiful, picturesque sceneries along the way. This is undoubtedly the most famous place in Bhutan, and was the backdrop for the ninja-training sequence in “Batman Begins”.

So far it had been a fantabulous trip and on our last day in Bhutan we haven’t touched snow yet, so we decided to head towards Chelela Pass on a chilly Sunday, as the temperature was low there was a fair chance to experience snowfall. We started from Paro at around 10:00 A.M. for a 37 km ride which makes an interesting road excursion. Chelela pass separates Hhaa and Paro vally at 3700 meter though the milestone shows 3988 meters, and is one of the highest motorable pass in Bhutan.

As we moved up the weather became more and more chilly and our hopes of experiencing snow fall began strengthening. Half a way we were seeing snow on both the sides of road and it was difficult for us to control the excitement.

Luckily we had got to experience snow fall although very little and as we reached the top the view was awe-inspiring. There was fog all over and it was difficult even to see across 50 meters, and after some time the sun started ascending and the view of valley become clear as the fog erased. 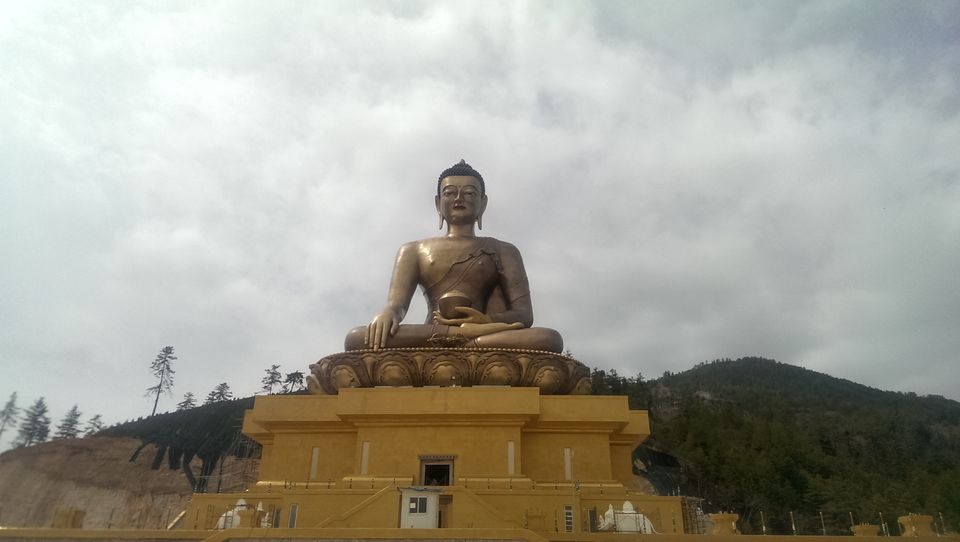 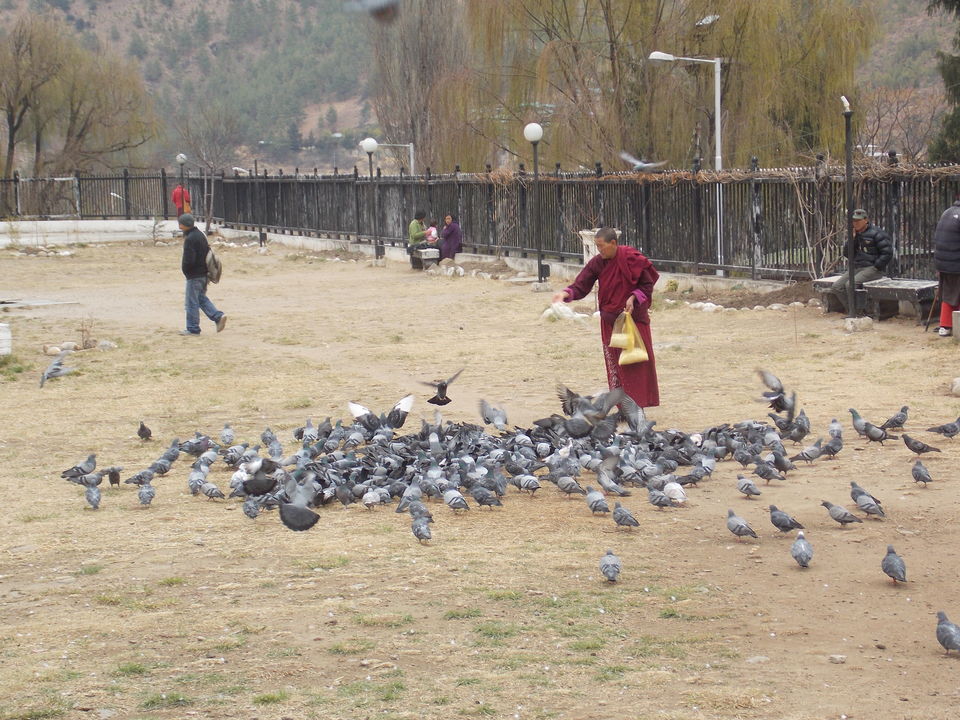 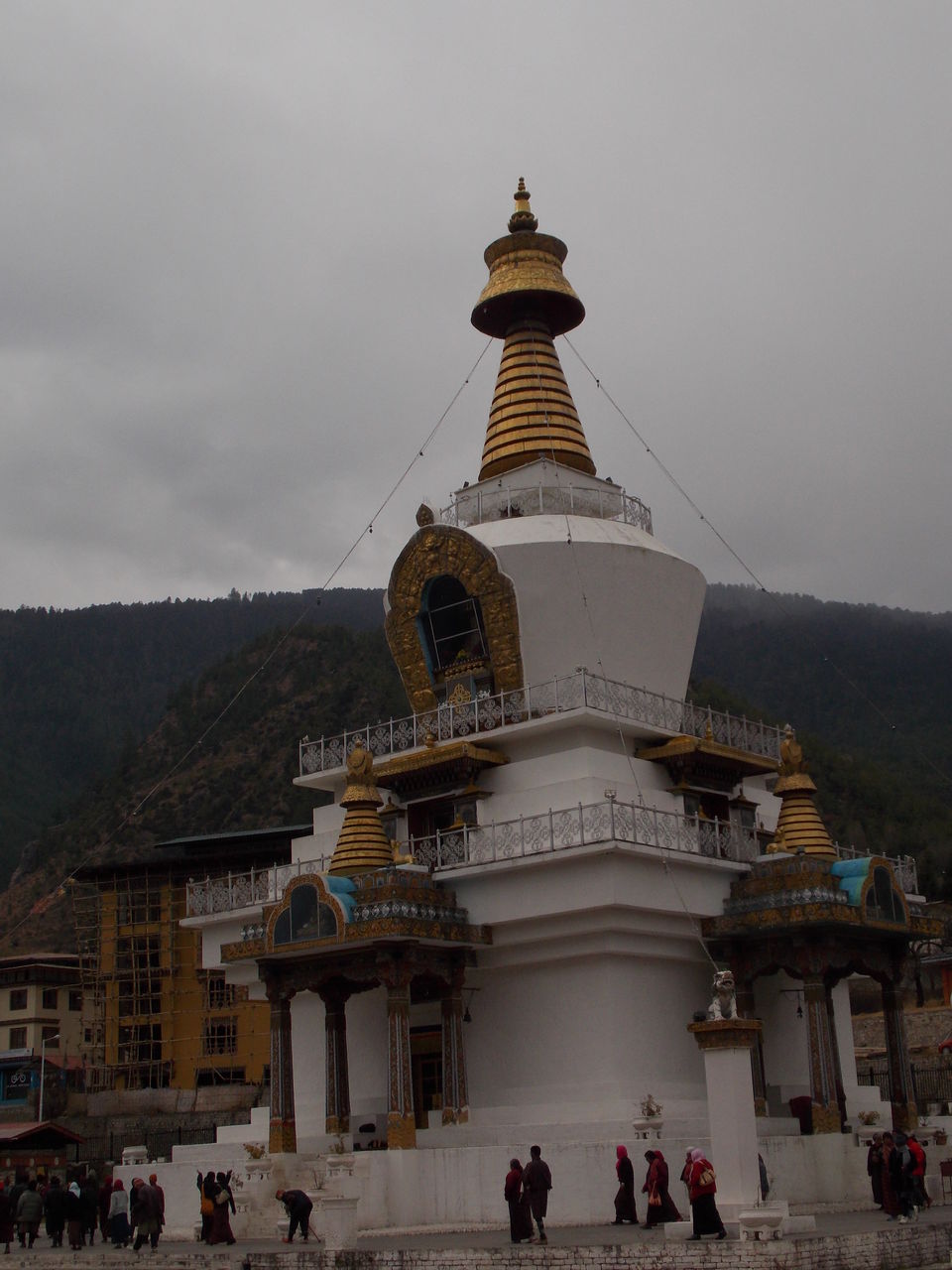 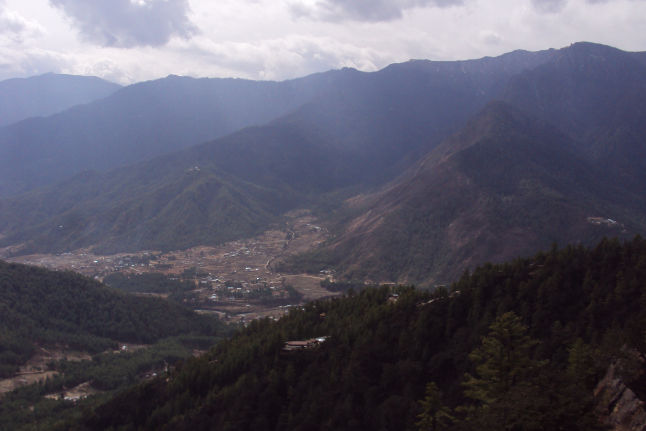 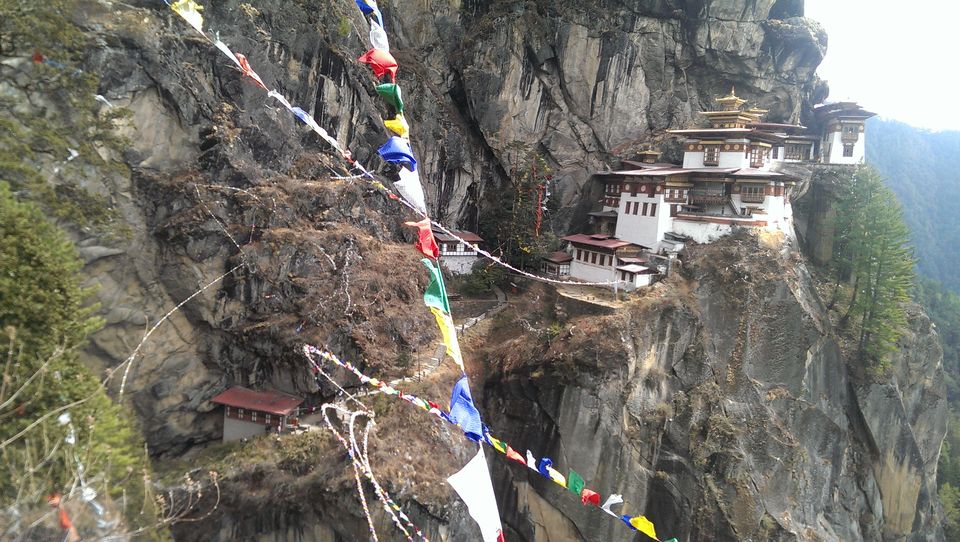 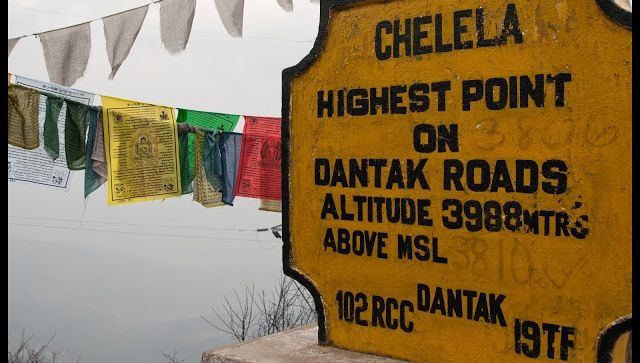 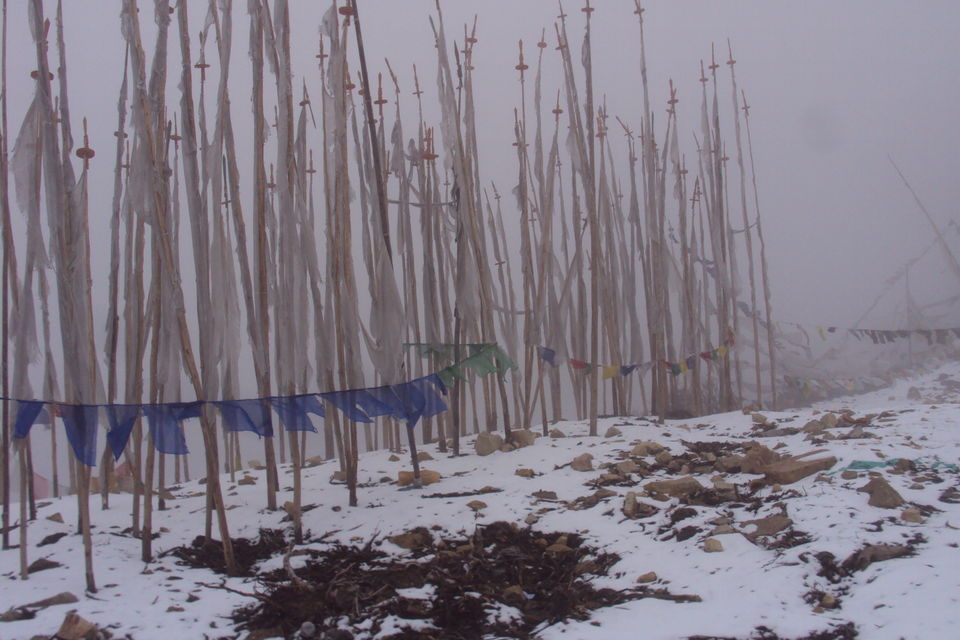 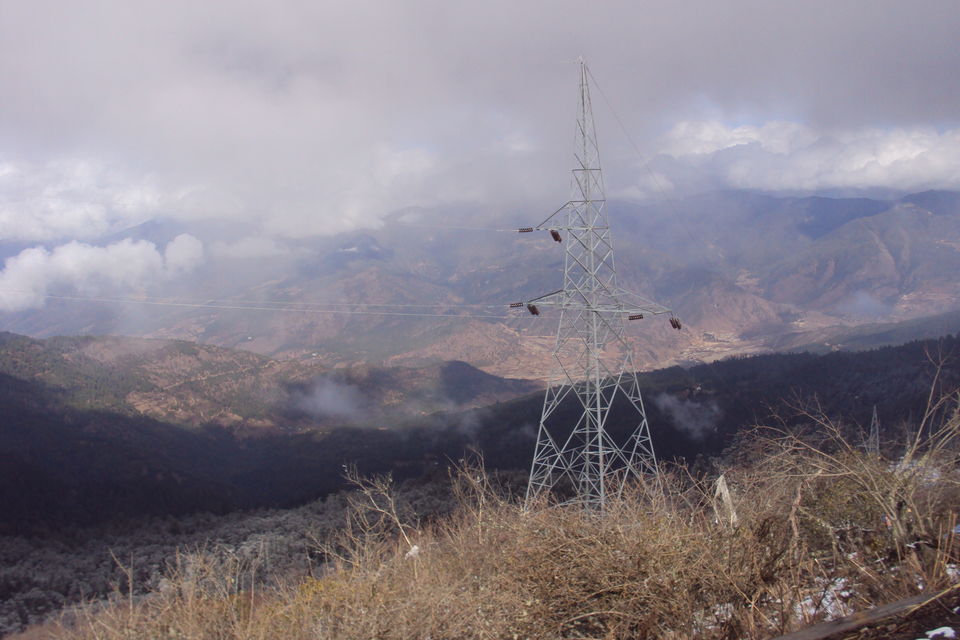