Driving through, to the Mountains 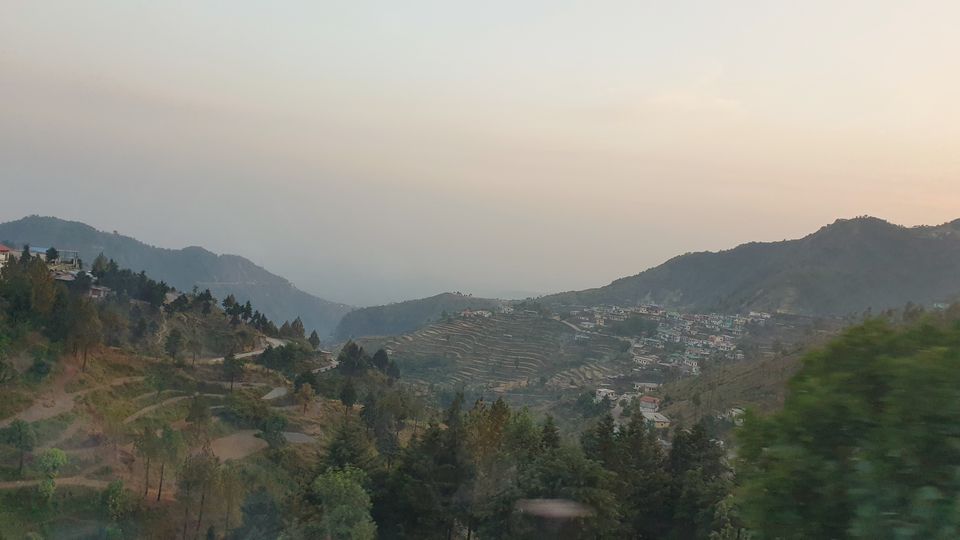 As tiring as it may be, the joys of a road trip are incomparable to that of a flight or train journey. Cramped seats may be the same in a car and a plane; but when it comes to gourmet food v/s the traditional and hot paratha with unlimited white butter on top and curd and pickle as condiments, it's the paratha that wins hands down, whether it is soaking in the greenery around or savoring the mountains with a coating of white cotton at 30000 feet, the greenery is the winner or whether one has to choose from a premix instant tea or the adrak elaichi wali chai, it is the local flavored tea that is the preferred choice. Of course, a plane travel will take you to the destination faster, but as they say, sometimes the joy is in the journey not just the destination.

This time our road trip was from Delhi to Mussoorie. We started from New Delhi Railway station at 0830 hrs. Incidentally the day we traveled to Mussoorie, it was raining in Delhi and the weather had suddenly become extremely pleasant in the middle of May. It may not be an unusual site for Delhiites to see cycle rickshaws lined up near Ram Lila Grounds but people who are outsiders find it fascinating just like my kid did.

We embarked on what was supposed to be a long drive to Mussoorie. We took the route towards Panipat and stopped at Murthal for some hot parathas. What's the point of a road trip without these small pleasures? After relishing hot Parathas at Gulshan Dhaba, we proceeded further to Paonta Sahib through Karnal, Ladwa, taking the Yamunanagar Ambala expressway and via Tazewal.

In the entire stretch of this trip, the roads were very well maintained. Long stretch of roads with barely any traffic (except the times when we were within the city/town) flanked with fields on both sides. Lots of greenery to soak in. The Tazewal stretch particularly was even serene and emptier. This is supposedly a forest reserve and there were chances of sighting an animal. We didn't get to see anything probably it was mid afternoon. Although all through the trip, the monkeys on roadside were a very common site at various places. I would presume that a drive through this route in monsoon would be even more picturesque.

Time for some blessings from the Divine

We reached Paonta Sahib close to 1430 hrs. The approach to this place is another beauty. For the less informed, Paonta Sahib is a beautiful Gurudwara, on the banks of river Yamuna. The town is believed to have been founded by Sikh Guru Gobind Singh and that He and his horse had stopped at this place and continued to stay here for four and a half years. It was a divine experience to be there. Fortunately when we reached the Gurudwara, it was not too crowded. Within the temple complex, there is a parking lot with ample space for parking cars. Also, there are ample joints close to the Gurudwara for those who wish to have a quick bite rather than partaking in the Langar. The Gurudwara also has a museum but since we had to travel further on, we decided to skip the museum.

From Paonta Sahib, we left at 1500 hrs and reached Dehradun at around 1630hrs. We had been told by our friends that Kalsang Café is a must visit and we should stop there for a quick bite, which we did and moved on to Mussoorie.

Towards our final destination

Needless to say, the drive from Dehradun to Mussoorie is full of winding roads with cafes all along. There is big Shiva temple on the way too. The drive from Dehradun to Mussoorie is precisely an hour. As the case is with all hill stations, as we climb higher, the temperature starts dipping. But the sights while climbing uphill leave us speechless and the dipping temperatures don't really bother us , on the contrary they are more than welcome.

While it was our decision to take a longer route via Panipat and Karnal, there is also another route from Delhi to Mussoorie via Meerut and Haridwar. This is a more preferred route.