Lost and got Lucky

This is not the first time that I tried doing something really stupid and got badly scolded for it. But this time it was far more thrilling and scary for me as an inexperienced and a mere moderate level trekker. Inexperienced because most of my treks till now have been in the western ghats, which are not as giantly numbered in terms of altitude as the Himalayan mountains and also provide ample oxygen and livable weather. Neither did they have freezing temperatures and even if my only two Himalayan treks did, I was well equipped for the oncoming inconvenience. In my current trek, I had to face the troubles with just a t-shirt and a sweat shirt and these troubles were far more biting.

It had been more than a year since I met my wing mates and even longer since i went out on a trip with these guys. Suddenly one day, I see that I'm added to 'Manali trip', a Whatsapp group created by these guys. And then comes Abhijith's message, "Guys we are coming to Delhi this weekend. Keep yourselves free for 3 days. We are going for a trip to the Himalayas." And of course that smiley in the end wearing cool aviators and another with a rock on hand sign. Before I go any further, let me give you a brief about the members of this group.

We were 5 wing mates, who just became engineers and got separated by the desparate need in life, 'money'. Shafeeq, Nandu and Abhijith in Bangalore and me and Roshan in Gurugram. There are more from the same wing, but they couldn't make it for the trip. Ours is a group of 10 wing mates, of which only 2 are non-Malayalis and unfortunately, one of them is me. Unfortunate because as the only minority in that group, language becomes a serious issue. You just can't tell whether they are talking about you or someone else and I always had to wait for them to stop laughing so that someone could tell me the joke and even I could have a short 2 sec fake laugh and later regret wasting my time for that funny joke, which later became 'not so funny' after the explanation and unnecessary build up. Although I tried learning Malayalam, I couldn't. My wing mates weren't good teachers, obviously! However, I'm known as the 25% mallu and the will continue to do so.

So the day of journey was here. The 3 Bangalorians reached Delhi. We booked a Myles car and headed for our journey. It was really hot at first, but as soon as we hit the mountains, the need for air conditioning vanished.

Finally we reached Manali at around 2 pm. It took us a total of 14 hours to reach our destination. We booked two OYO rooms, spent our night there and headed to Rohtang pass in the morning. Being scared of driving ourselves in those ghats, we booked a cab for Rs 2500. We left Manali at around 10 am and finally reached Rohtang pass at around 12 pm. One piece of advice to all who wish to go via this route. Do try chicken burger at 'The Apple Tree' restaurant. It's simply delicious.

I had no plans for trekking this time as few others weren't interested, but, after reaching Rohtang pass, of the road, water streams, lakes, mountains, valleys, horses, birds and so on, all I could see were the mountain peaks. What a view I could get after reaching the summit! 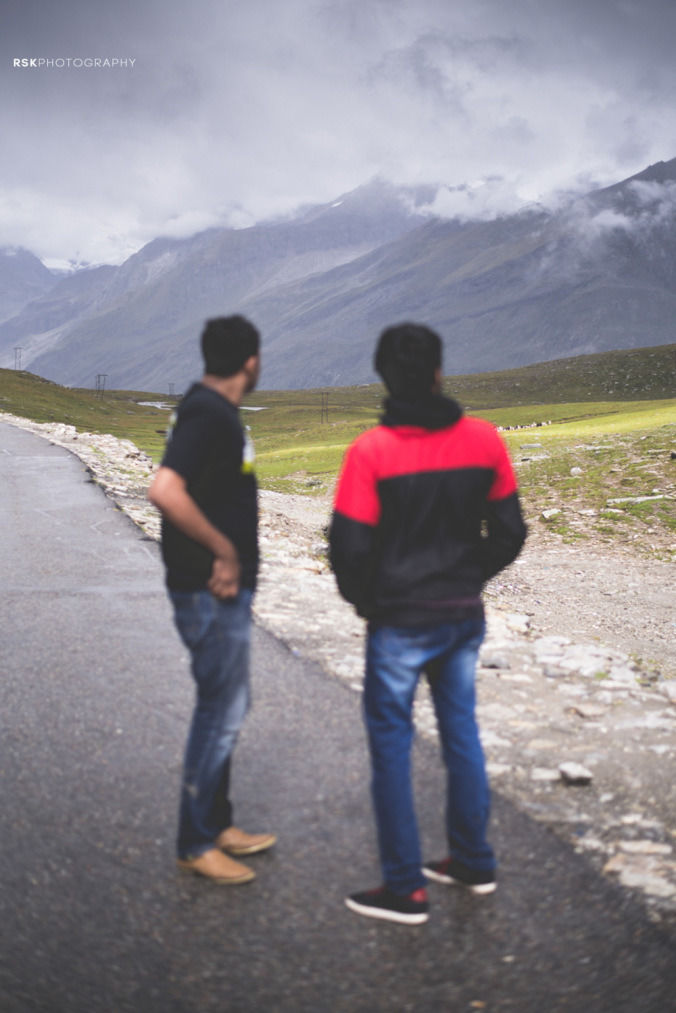 At the Rohtang pass point, facing towards the road going to Ladakh, I had two options to climb on either side of the road: on my left side, a sunny summit and on my right side was a peak covered in clouds. Of course I decided to take the sunny side. So the plan was to click a few pictures with the malayalis and then start climbing. Luckily we had Roshan Santhoshh to click some really nice pictures of us. In the mean time, we also had some tea and bought monkey caps from the locals who kept roaming around in search of customers. By now, few pictures were clicked and I was ready to climb the sunny peak, but I couldn't stand not climbing the cloudy mountain as it seemed a little higher. So out of eagerness, I asked a local, "Is there a storm up there or just fog?" It was stupid that I asked such a question because I very well knew that there's a storm up there. But surprisingly, the lady replied, "it's just fog" and right then I had a big smile on my face. I was going to climb the mountain in the clouds.

Although Nandu and Shafeeq were ready to walk along, I had to leave Shafeeq behind as he was more interested in taking pictures. So me and Nandu headed towards the mountain. We weren't carrying any backpack, neither did we have a waterproof jacket or even gloves. All we had were simple winter clothes: a t-shirt, fleece, jeans, good trekking boots and socks, a monkey cap, a bottle and a (very useful) belt. We made our way over the rocks and sand, grass and pebbles and water streams and mud. We had almost just crossed the base of the mountain and a hailstorm started. However, Nandu and I kept moving hoping that the storm would stop. When we realized that it was hopeless to hope for the hopeless, Nandu headed back to the road. Then I tied the bottle to my waist using my 'very useful' belt and continued ahead. The hailstones kept hitting and my shoes and clothes were slowly starting to get wet. After climbing a few meters, I was completely covered in clouds. It is terrifying to hear the clouds roar right into your ears and that's exactly what was happening. This was one of the most thrilling experiences I've had in my life. At that point I could imagine a giant cloudy lion face staring at me and roaring with his jaws wide open. There were times when the clouds cleared a bit and let the dimmed sun rays pass through showing a picturesque view of the mountains crown. There were times when these clouds just stayed and spared me the beatings of the hailstones. But the rest of the time I just had to bear the punishment and continue the ascent. 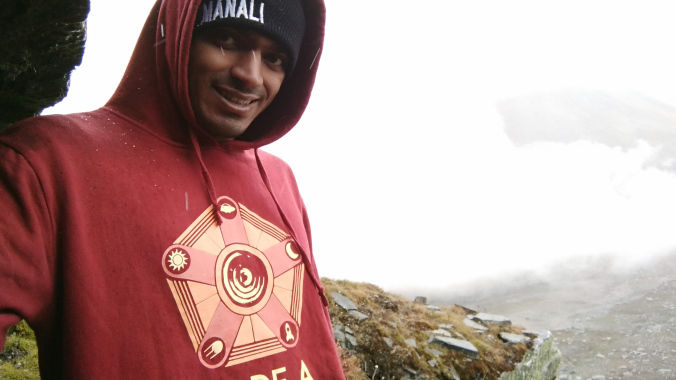 Climbing my way up, I tried hiding behind the rocks occasionally hoping that the storm would settle down a little, but the higher I went the stronger the storm got. Finally, after a lot of walking, I reached the point of the steepest ascent. The summit was just a few meters above. But the storm was strong and the way up was through slippery gravel. By now I had become considerably wet and realized there was no smartness in going any further. I satisfied my ego by convincing myself that I have already climbed a lot of the giant rock and could feel proud for doing so in a stormy cloudy weather. And so I headed back to my friends.

In the mean time, the atmosphere at the bottom had become very tensed. It had been two to three hours since I had left. Nandu had returned long back and I was lost in the clouds. Our driver was equally tensed. My friends tried getting help from the locals but everybody said that it is impossible to find me now. Some even said that I'm probably already dead by now. Our driver then explained them that 'Rohtang' means 'land of corpses'. By then, the assurance of my death had become stronger in the scared minds of my friends. It was already five or six pm and all the other tourists and vehicles had already left back for Manali. Therefore they decided to head back and inform the local police to send a search paty for me. I don't know what all thoughts about me were troubling them. Little did they know that I was having fun up there.

On my way back the clouds had become denser and I had completely lost track of my way back. I kept drifting more and more towards left, but still somehow managed to find a way downward. Lucky for me, this whole side of the mountain had the road at its bottom. So no matter where I land, I could still get to the tar. After some descent, the fog cleared. The once ruthless mountain wished me goodbye with a bed of red flowers, lush green grass and pure water streams. 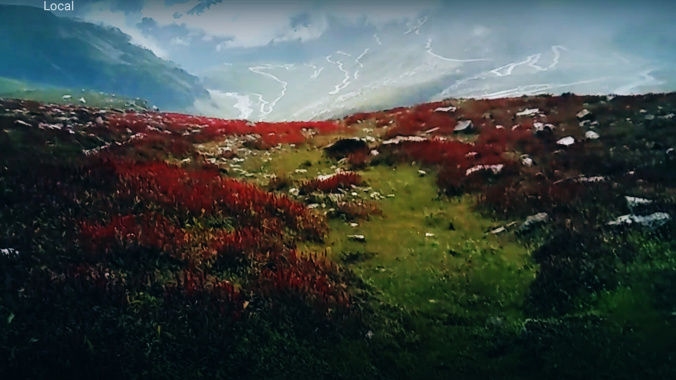 After the intense workout in a relatively lesser oxygen zone, my mind had started to show lesser control over my legs, which made me walk as though I was doing a catwalk in an outdoor fashion show. Nevertheless I was enjoying the peaceful view and moving ahead with the assurance of landing on the road, closer to people who might want to help me go home. Finally I reached the highway. Unaware of the time, direction toward Rohtang pass and that my friends had already left, I decided to take a lift to Rohtang pass, meet my friends and head back home for a heavy dinner and a good night sleep. I stepped on the road, drowsy and unable to walk straight, stopped the first vehicle I saw to ask for directions and board it if was going the same way I wanted to. It was a jeep, similar to the one I came in. The driver opened his window. He looked a bit similar to ours, although I couldn't very well remember his face. Rest of the windows were closed and covered with condensed layer of water vapour. But I could still see a few guys of my age sitting inside. I asked the driver, sounding like a wasted guy, which direction is Rohtang pass in. The driver was silent for a few seconds and looked at me as though I'm asking a very silly question. Just then the rest of the windows opened and there were my beloved friends. Oh god! Did I not miss them! I quickly ran inside the jeep and sat comfortably with a bag of snacks. I was welcomed with a warm sputter of swearing and shouting. I was supposed to feel bad about my doing and the high probability of me dying, but I just couldn't stop smiling thinking about going home comfortably just because I had such a great luck that day. The leftward drift in the clouds on my descent was actually in the direction towards Manali, the place where we all finally had to land. Everybody shouted, "stop smiling you idiot! We actually thought you were dead!", but I just couldn't obey their orders. I kept silent, changed my clothes and enjoyed my snacks in the warm comfort. Later I had a chat with Shafeeq. He was the only one who believed that I'm going to return somehow. Those words gave a movie-like view to the whole experience.

Finally we reached the Apple Tree restaurant and I had my favorite chicken burger. Looking back at the day, I felt extremely satisfied with my trip to Rohtang pass and even though I could not reach the summit of the mountain in the clouds, I was happy that I had achieved which very few dare to. This made me feel proud about myself and gave sense to my whole stupidity. What's smartness if there's no stupidity in life? I would just continue to do things that make me happy rather than just trying to avoid giving other people a less acceptable perception of me. But yes, next time I do such a thing, I would not leave such a huge responsibility on the shoulders of others and instead do it alone. 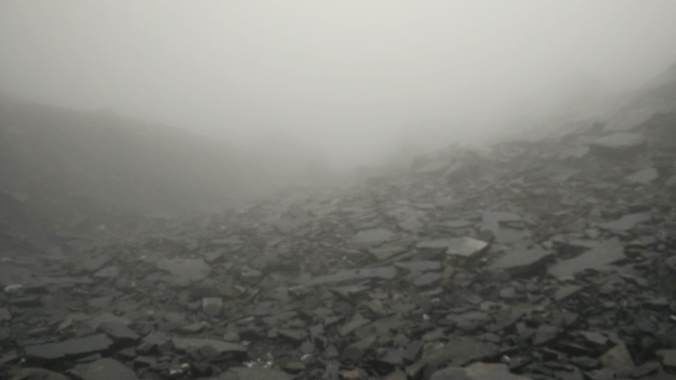 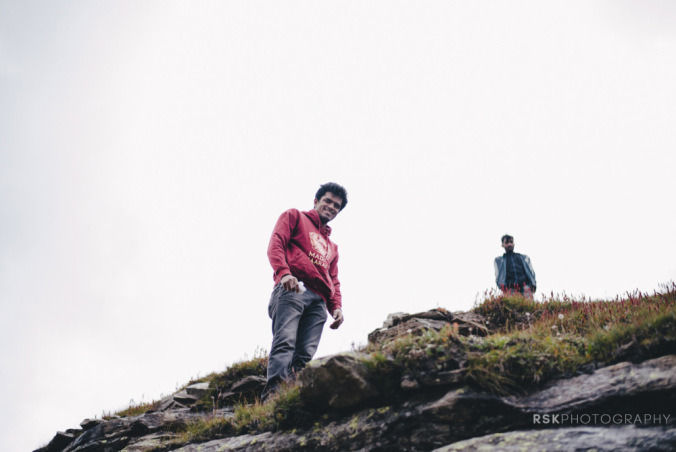 This post was originally published on Peak Edge And Valley.