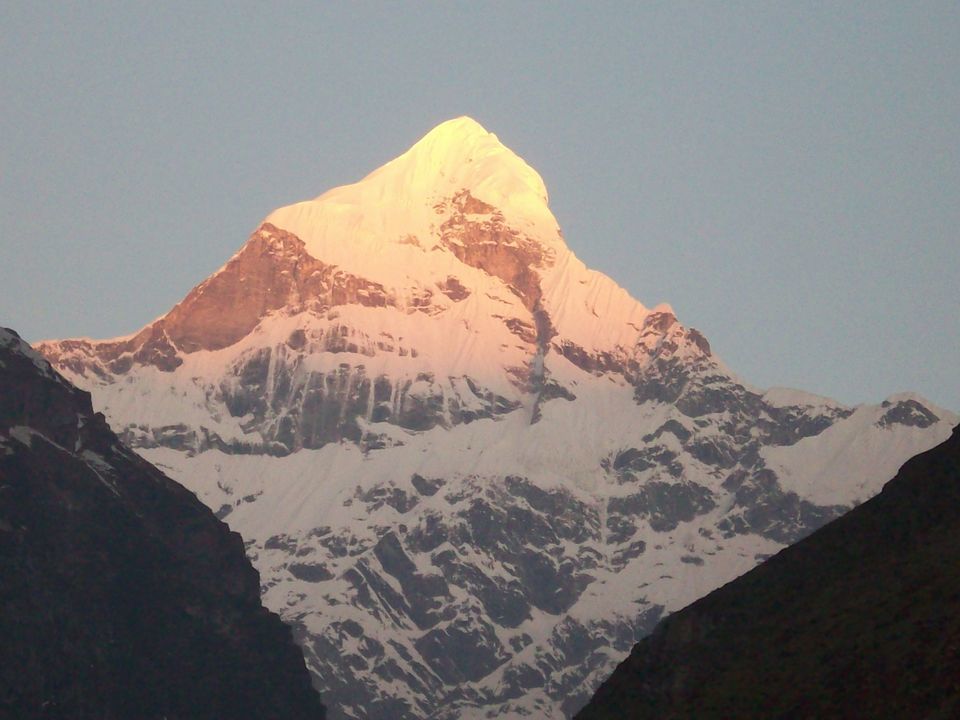 The heading sounds strange isn't it? But in the words of Paramahamsa Yogananda , 'The greatest romance is with the infinite'.

How about getting a slight glimmer of it? Some time back on my first trip to the Badrinath, my heart was filled with excitement to behold the mighty and majestic Himalayas. By the time we reached the base camp of Joshi math, I was overwhelmed by the first glimpse of snow capped peaks near the horizon. In the next two hours we reached the holy town of Badrinath and sun had wrapped itself in the blanket of darkness and the sky was overcast. In a casual conversation with a dhabawala, I enquired about some of the breathtaking views from Badrinath. Pointing at the western horizon which was obscured by mist, he said with a chuckle, "Be ready to lose yourself when you see that side tomorrow morning." I was curious to know but he replied with an all knowing smile.

After those words, you know, it was so difficult to wait till the morning!!! After having a beautiful darshan of Badri Vishal on the banks of the gurgling Alakananda and nestled in the Nara and Narayana mountains, we went to a hotel for having Aloo Parathas and pickle, the staple diet of char dham yatra. While having a chat with friends, unknowingly, I glimpsed outside the window towards the western horizon and was transfixed. Is it a dream world!!! A conical peak glistened in the soft moonlight filling the whole panorama of Badrinath. I remained speechless for some time and when I looked around all of my friends had the same expressions. "That is Neelkanth", said the waiter reading our expressions. 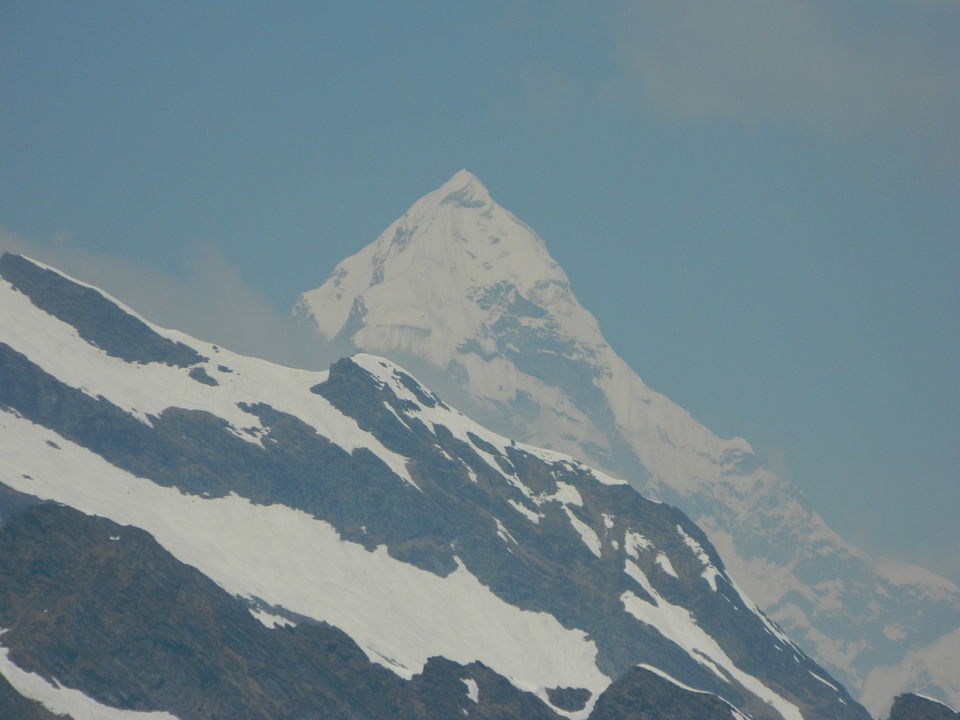 Due to paucity of time, we had to leave the next day, but I had made a resolve to trek to my ‘beloved’ Neelkanth next time we come to Badrinath. After a wait of nearly five to six years, I got an opportunity to visit Badrinath again.

Neelkanth and Shivling are the two peaks of unmatched beauty in Himalayas. The Neelkanth peak rises 6596 metres from the sea level and towers dramatically over the valley of Alakananda river. 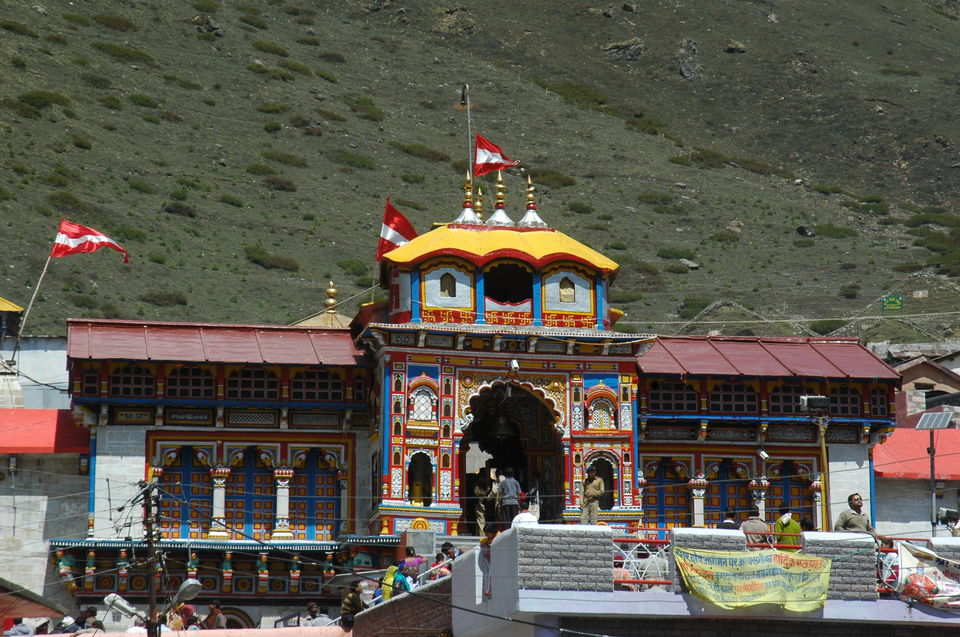 Once we reached Badrinath, we set out immediately the next day to have a rendezvous with my beloved Neelkanth. 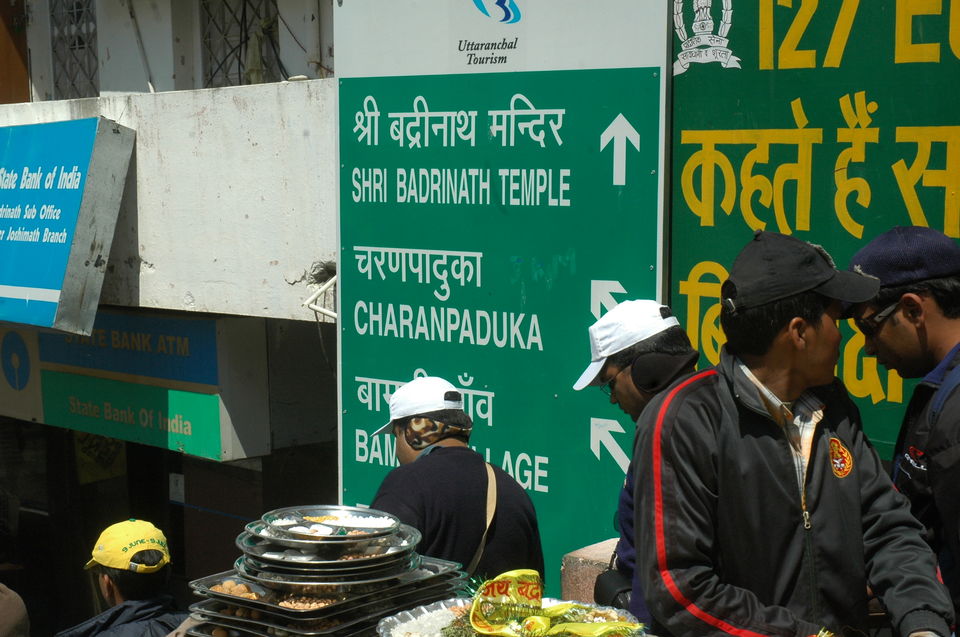 Leaving the Badri Naryana temple behind once has to walk on the Narayana parvat flanked by the cascading Rishi ganga which bisects the peaks of Narayana and Urvashi. 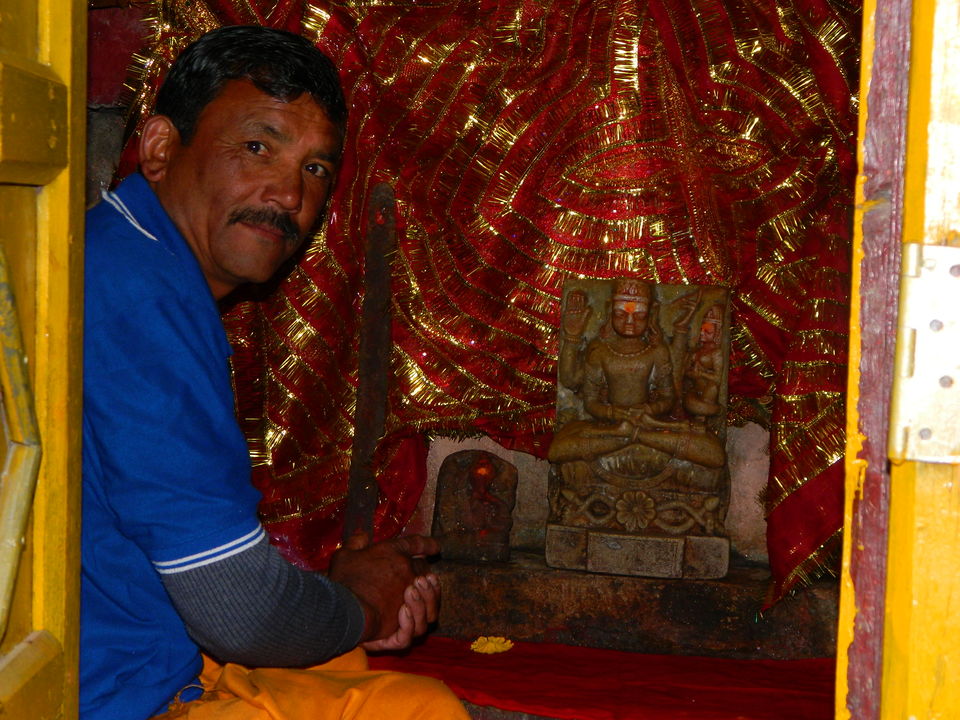 Local priest of the Urvashi temple from the small hamlet of Bamiya gave us some interesting piece of information- Neelkanth means blue throated one, meaning Shiva who drank the halahala poison to save the world from destruction.” He added showing the peak on the western horizon, “If you see the peak, it is always covered with snow to give him coolness. Once the sun starts to reach the mid heaven, clouds quickly come and cover Him to avoid heat.” He added, "It is 9 kms to the base of Neelkanth from Badrinath." That was a valuable piece of information.

Sounds a nice legend, but we were dumbfounded to find it true....

We set out with the gushing Rishi ganga and Urvashi parvat on our left and the towering Narayana parvat on our right and gaze riveted on the beloved Neelkanth. We reached the temple of Charan Paduka and then a tiny cave which the yogi had made his dwelling. The trek was becoming difficult, the wind was blowing fiercely and we were feeling shortness of breath every 200 meters.

Starting with a salute!!! (Left is Urvashi Parvat and Right is Narayana Parvat) 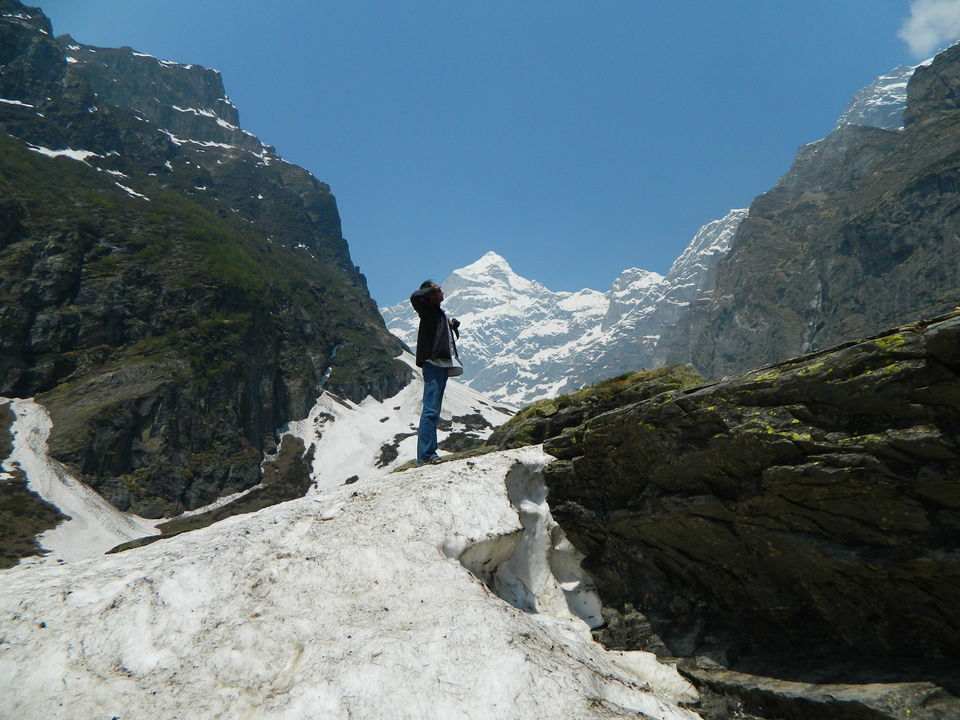 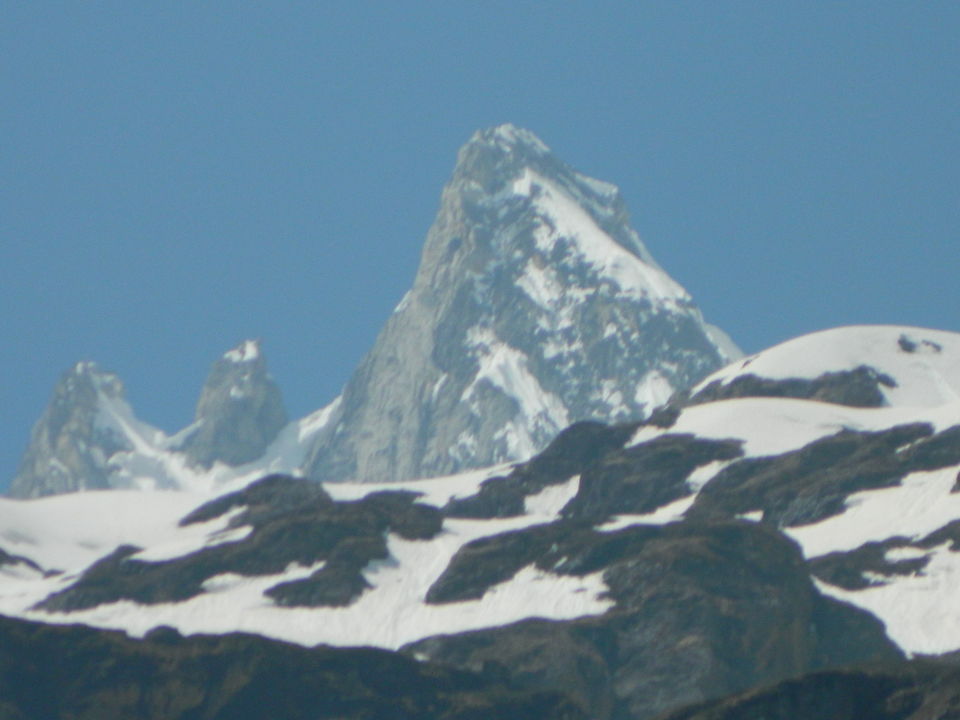 Getting drenched in many waterfalls enroute 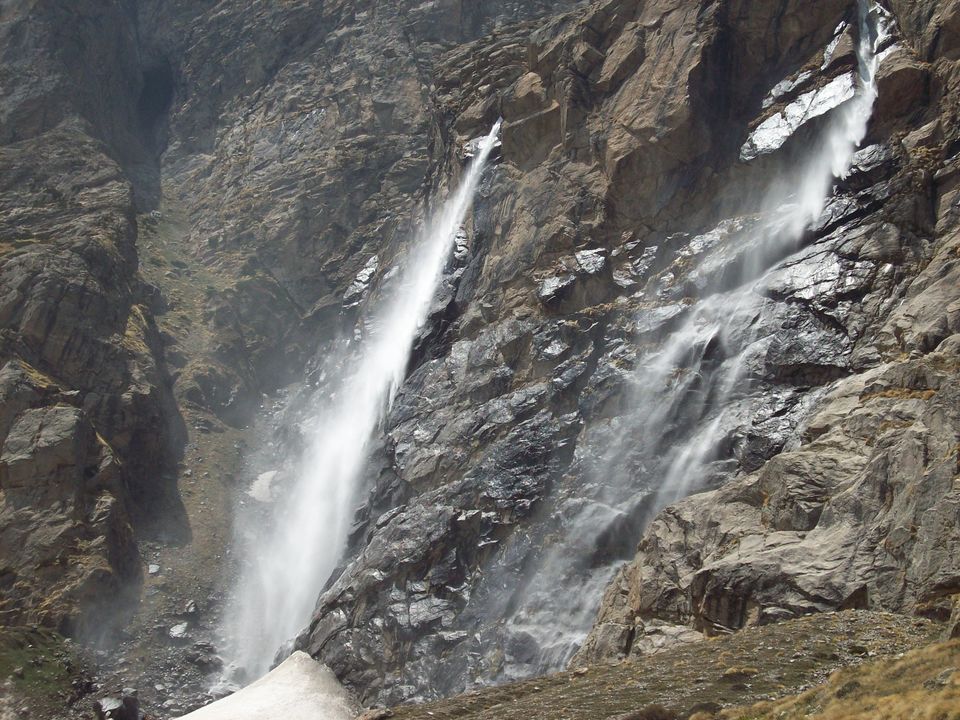 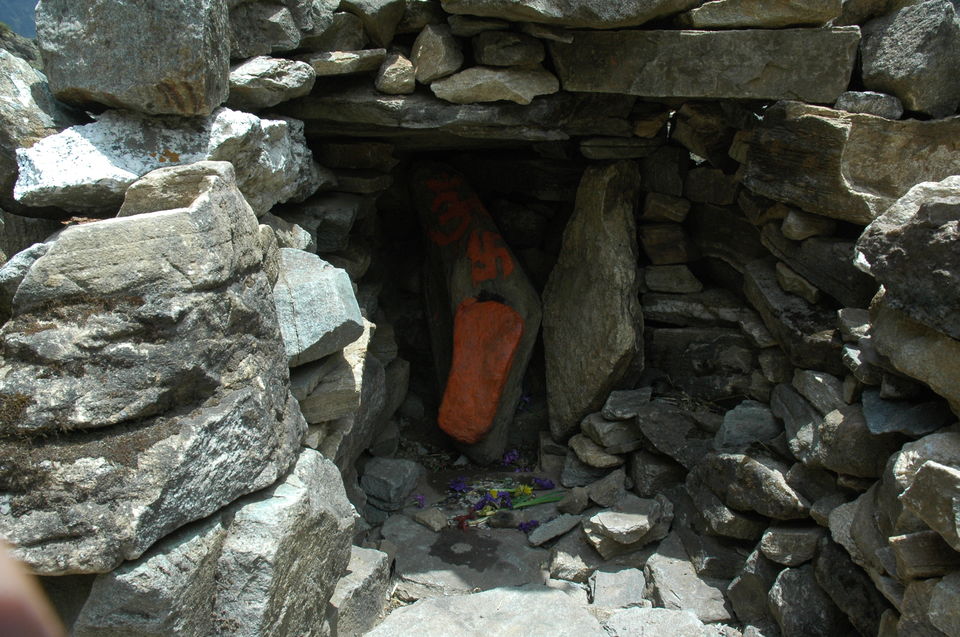 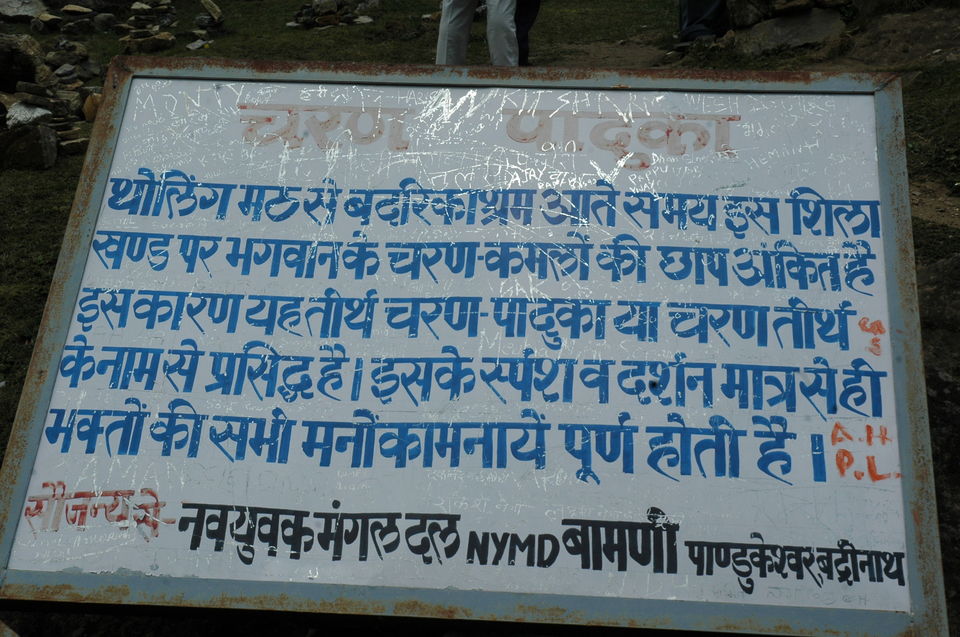 A cave in the lap of Neelkanth 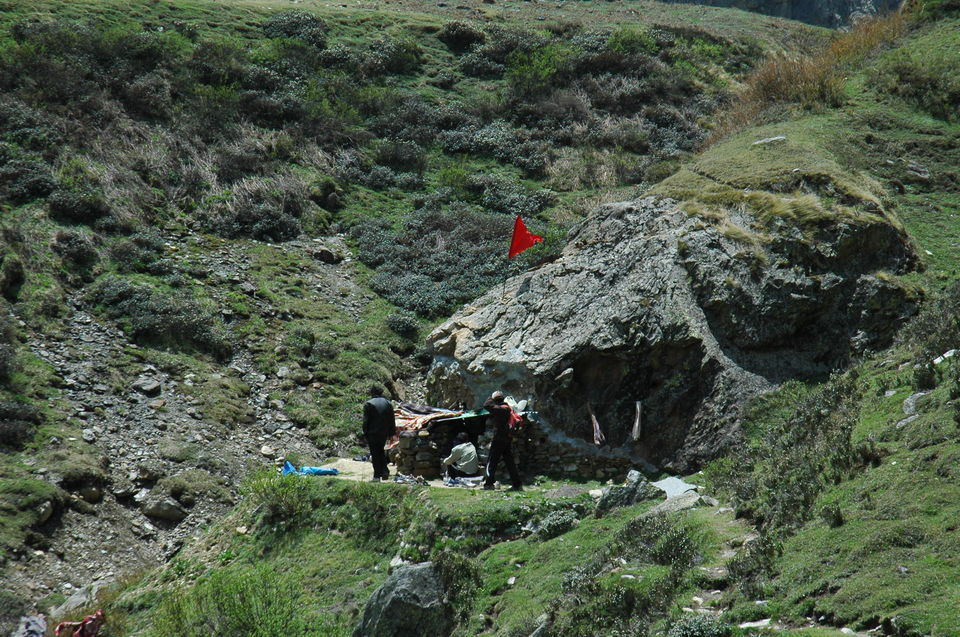 One of Neelkanth's lover living in its lap 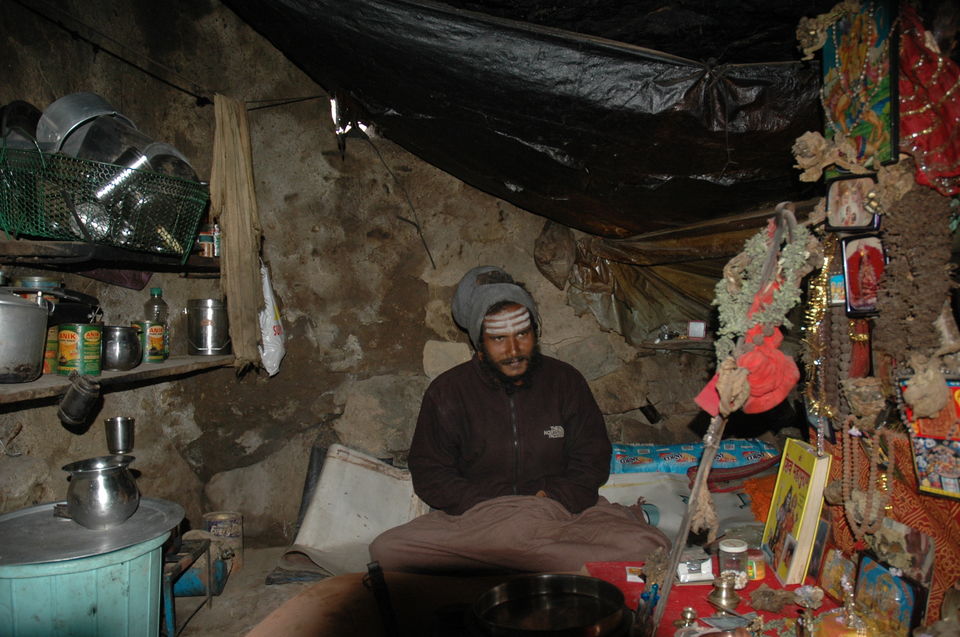 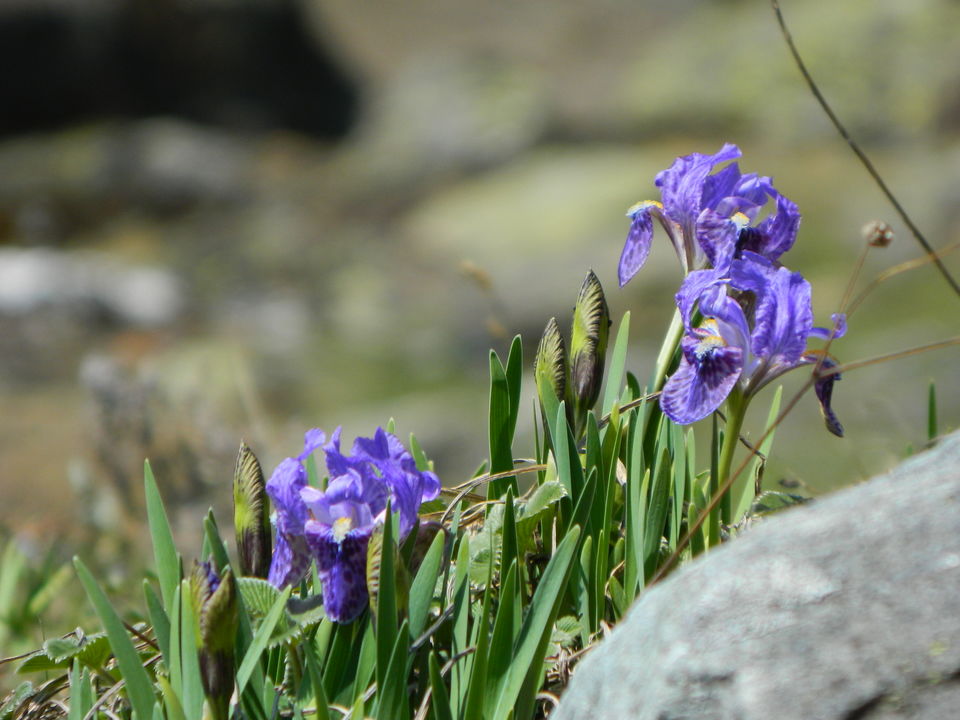 Just before the glacial moraine 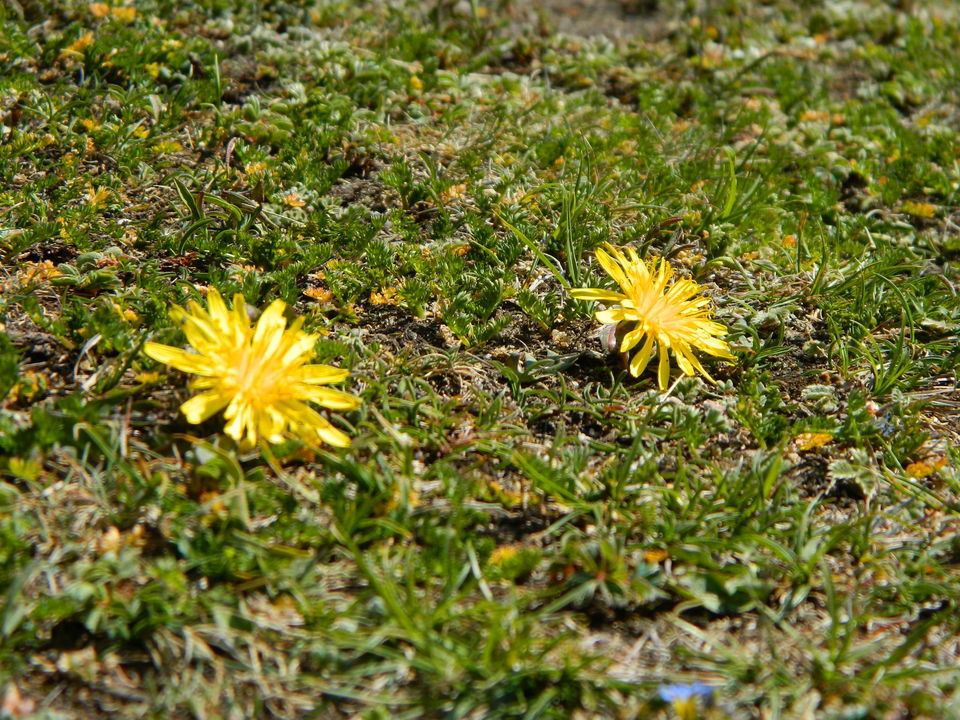 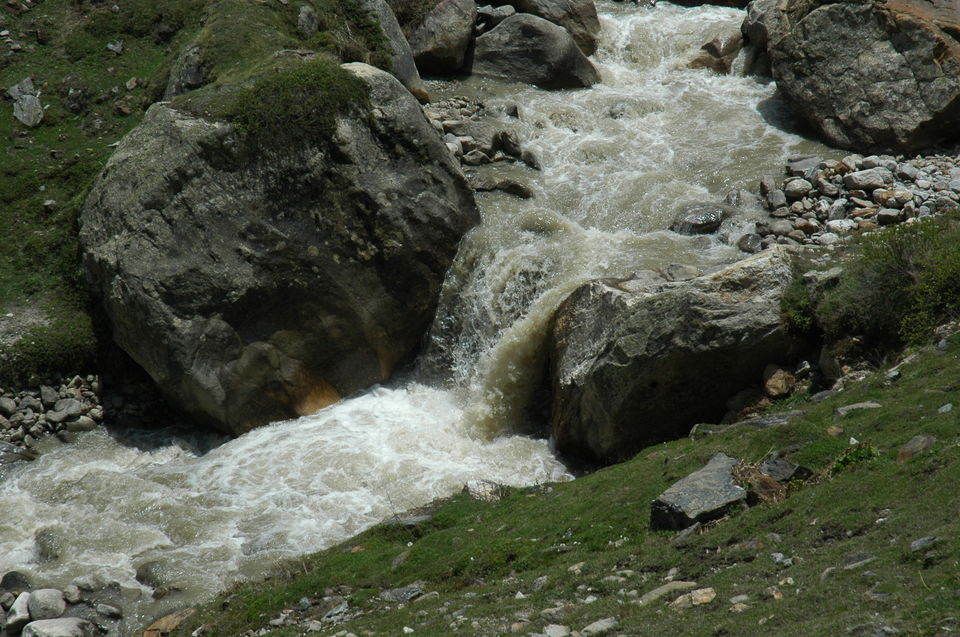 But the strong resolve to be in the lap of the beloved kept us going. The mixture of ice and debris had started and there was a blanket of ice over the Rishi Ganga. Negotiating through the moraine was getting difficult. After a trek of around 7-8 kms, we had reached near the base of Neelkanth. It was one hour to noon. The view was electrifying. I lost myself beholding the majesty and grandeur of the gigantic peak in front of me. Words failed and my whole being dissolved in that vista. It looked as if lord Shiva is sitting erect and lost in deep meditation

Did I get a glimpse of that 'Romance with eternity' in that moment? This inexplicable vision lives with me forever....

We saw a stray cloud hovering around the conical summit of Neelkanth. 'OMG!!! What the priest, is it coming true?' I exclaimed coming back from my reverie.

Last glimpse before clouds obscure it 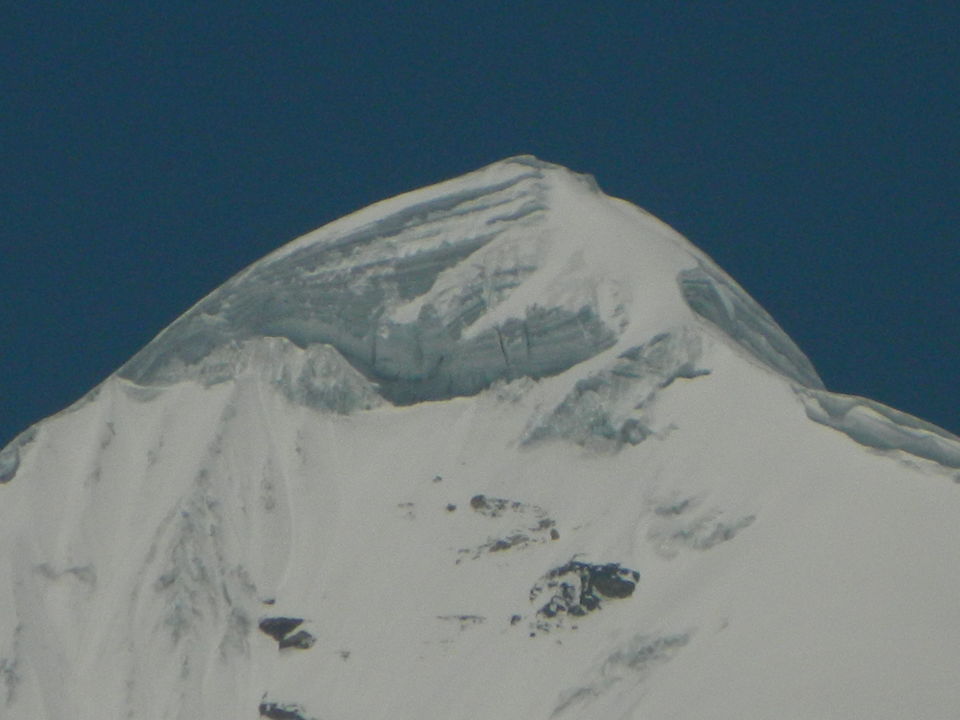 In the next 30 minutes, clouds gathered around the peak as if ordered by a mysterious force. Just half past twelve, Neelkanth was completely obscured from our view and the weather became overcast.

Slowly the clouds gathering around Neelkanth 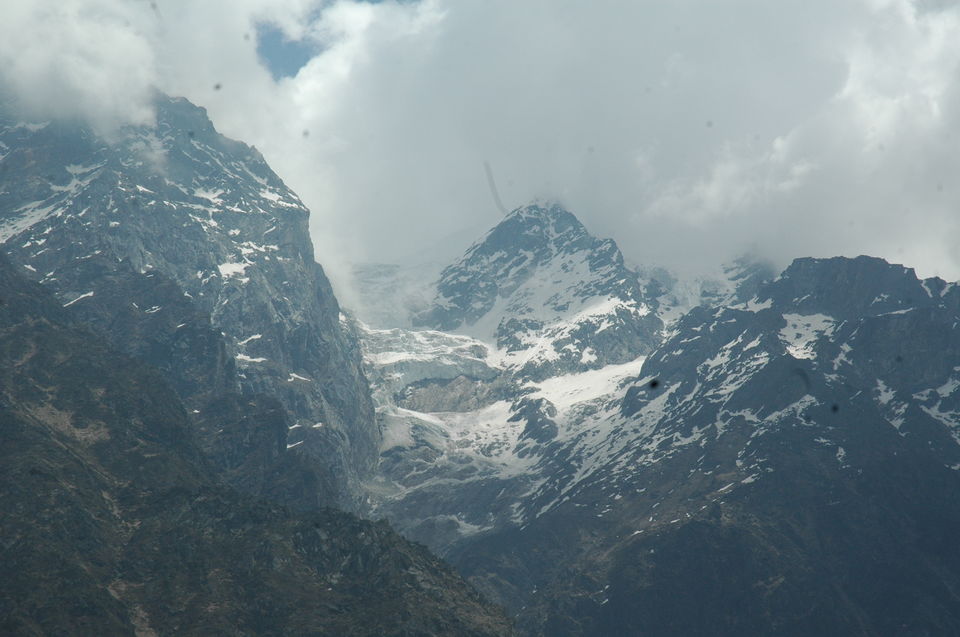 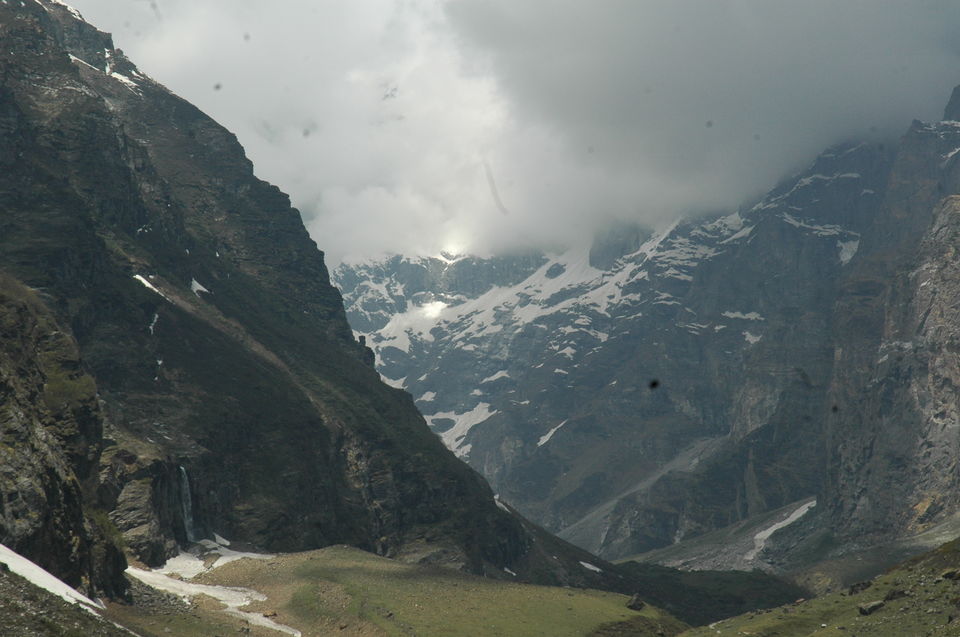 Covered in clouds near the base 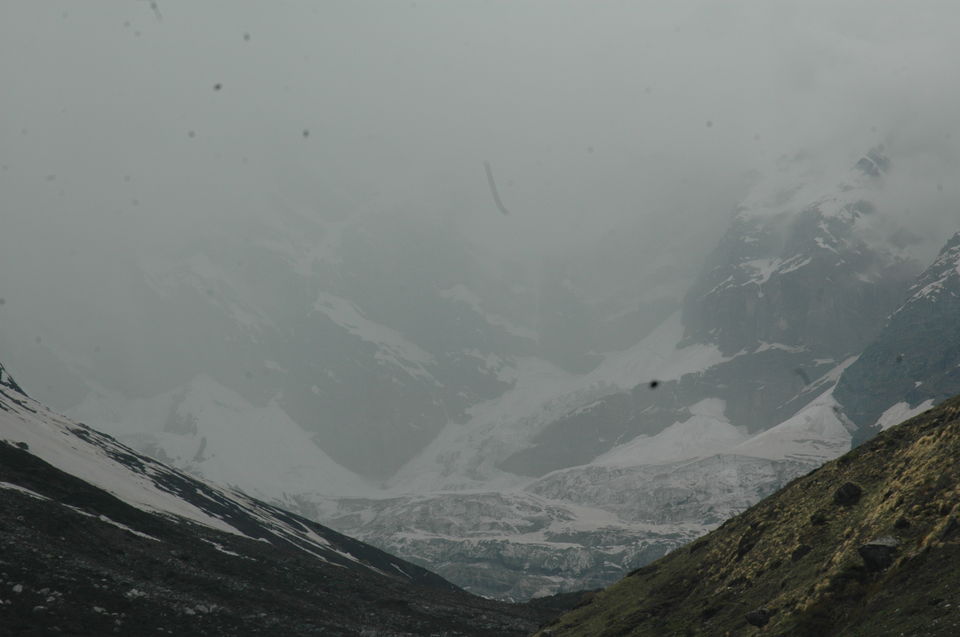 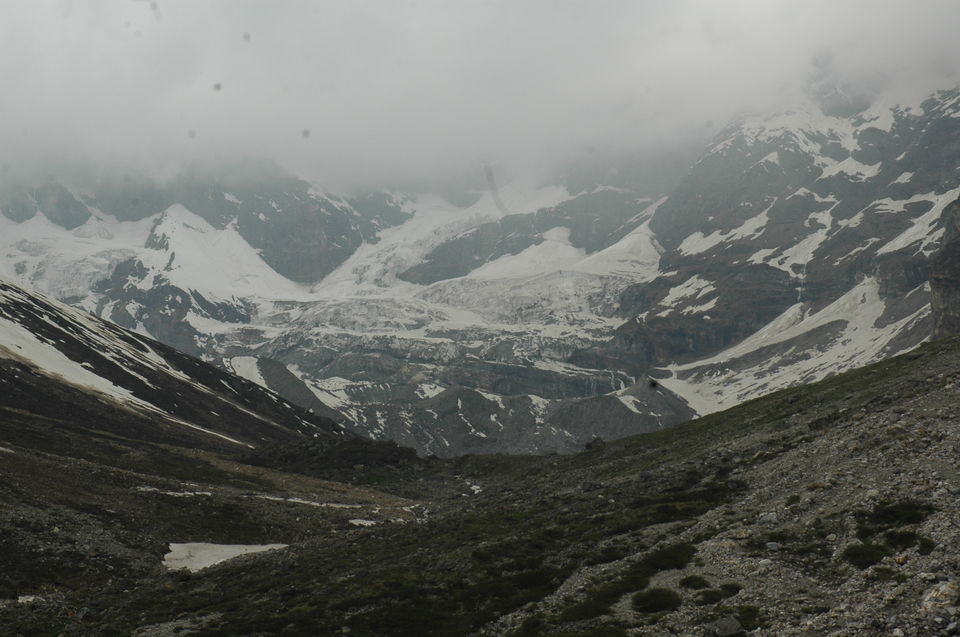 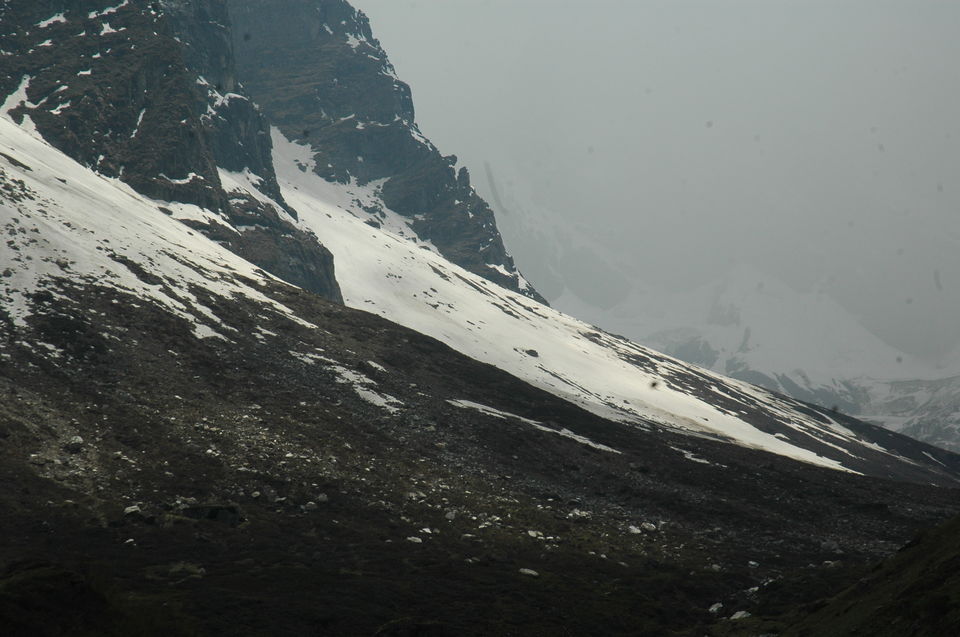 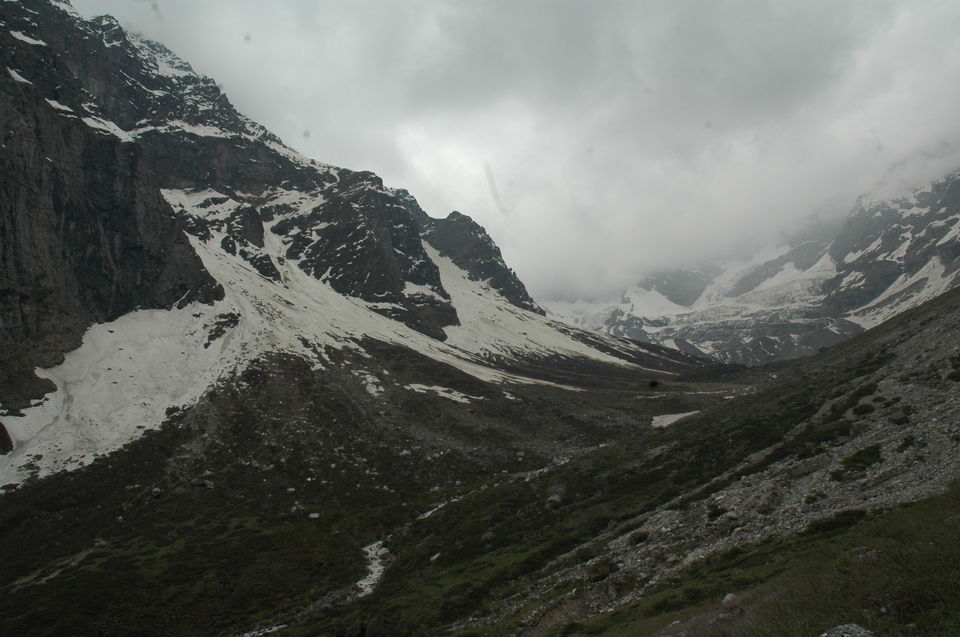 Badrinath a small dot from Neelkanth (Zoom in to see) 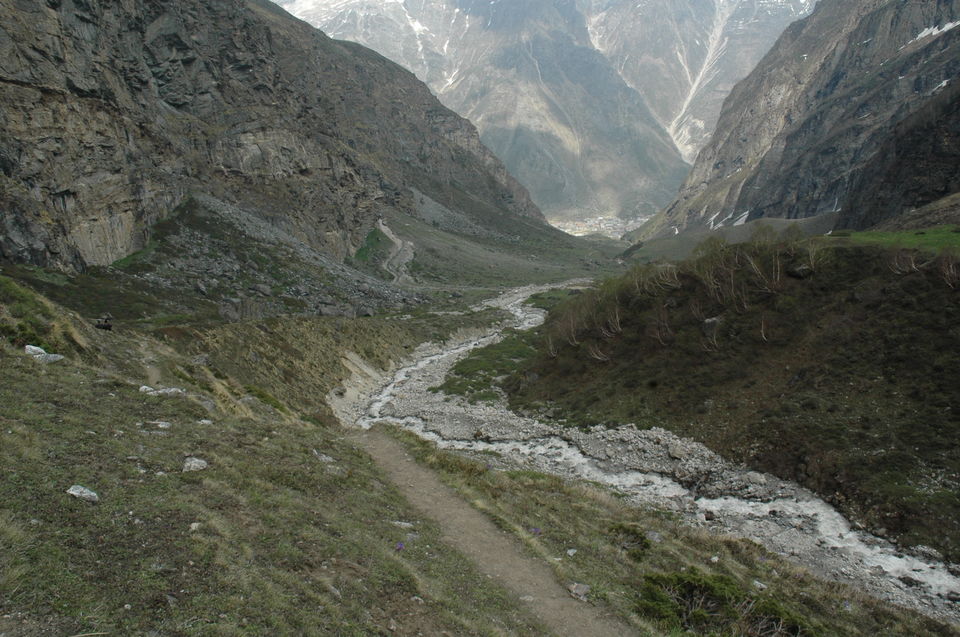 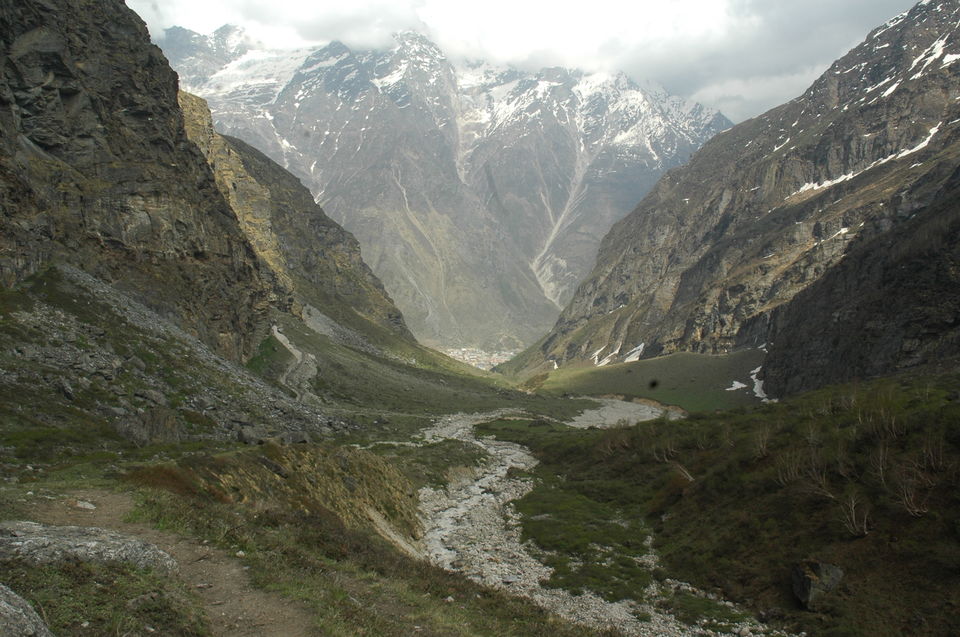 Don't miss such a romance which is blissful and everlasting...

Ready to make Neelkanth your Beloved ???