The Divine Vibes of the Ethereal Jagannath Swamy temple in the Sacred city of Puri, Odisha!

The city of Puri is not only famous for its oceanic vibes, but most importantly for its divine vibes. This place got popular just because of the temple of Lord Jagannath Swamy in the heart of the Puri. Millions of people visit this temple every year and at least thousands of people witness every single day. But we were unfortunately fortunate enough to make a plan for the city in the most happening season, that is on New year's eve. The rush on that particular day was above a million. As this temple is one of the Char Dhams (four most divine places of India introduced by Adi Shankaracharya), the flow of this place has been always heavy.

This temple gives goosebumps to every person who visits it and especially when they listen to the historical stories of this temple. This temple is considered as one of the most sacred places in India where Lord Jagannath, one of the forms of Lord Mahavishnu resides with his brother Balabhadra and sister Subhadra Devi. The temple mainly consists of these three siblings as deities and in the main temple, a person can witness other deity forms too in various decorations according to the occasion.

There are many stories revolve around this divine place and every story is one of a kind. Being established by a king in ancient days, it got developed by the preaching of Adi Shankaracharya and even escalated after him by the various rulers of India except for Moghuls. The government of Odisha is now taking good care of this temple and helps in hosting thousands of devotees every day. 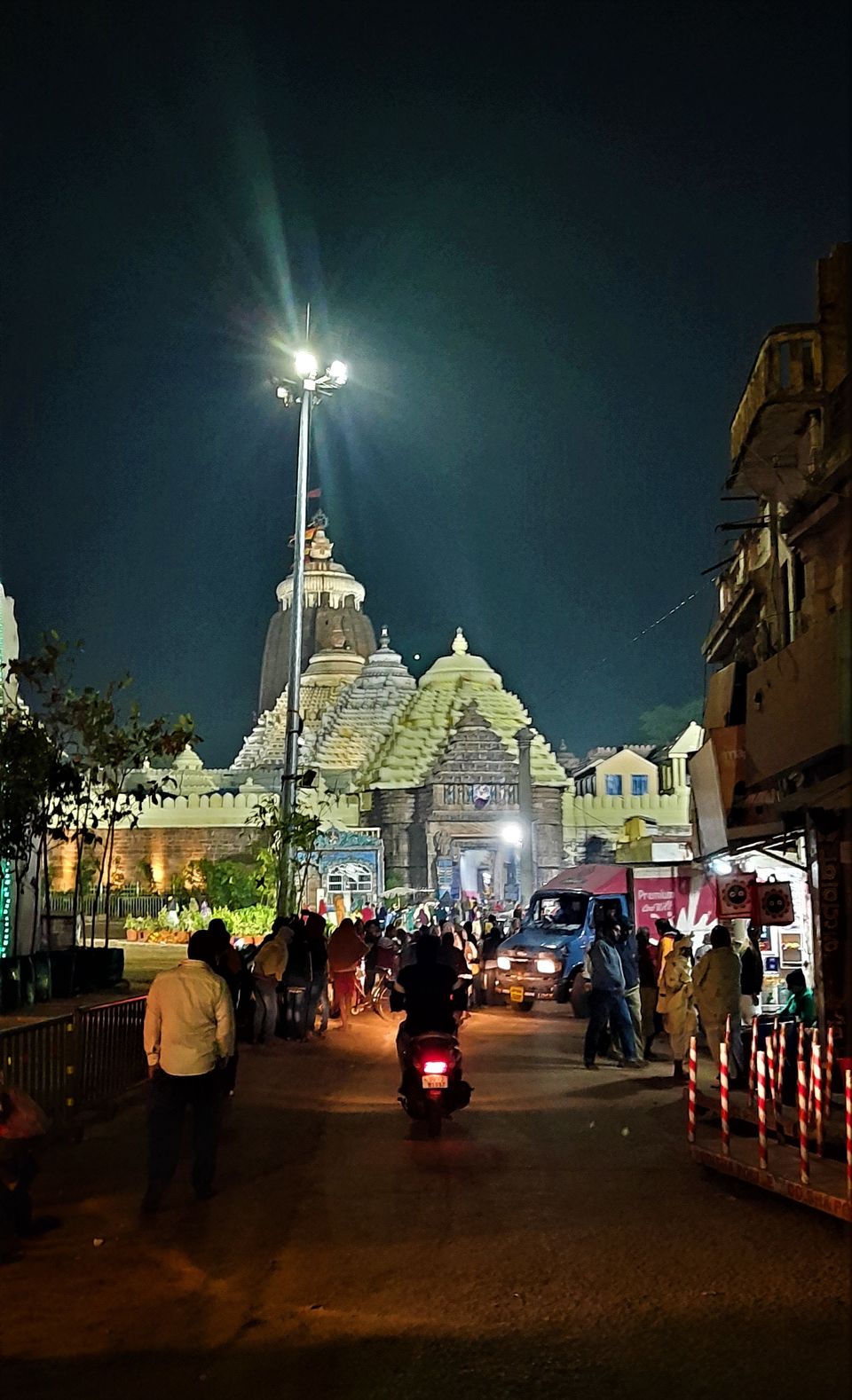 My sister and I have planned to visit the temple on 1st Jan, but as we heard about the heavy rush, we decided to visit it on the last day of 2019. Considered being fortunate enough, we got to hire a Pandit with us to get a quick Darshan and also to act as our guide for the temple tour. Yes, if you visit the city of Puri, it is always recommended to go along with any pundit who has access to the main temple of Puri. Mostly, hotels and resorts provide contact details of Pandits who can help you witness the heavenly vibes of the temple. Some pundits may ask you to donate to the temple under the name of Papa parihara (to get rid of ill doings in life) and some may ask you unnecessary donations. Just make sure, you spend on better things like donations for food and all. Else, deny them. There is a worship tree, where people tie threads to the branches of a tree. It is highly believed that all our wishes come true if we tie a thread, but for that, a person needs to donate money of 501, 730 or 1110 rupees. So, there are many such customs which involve money. Just take care of them and spend wisely. 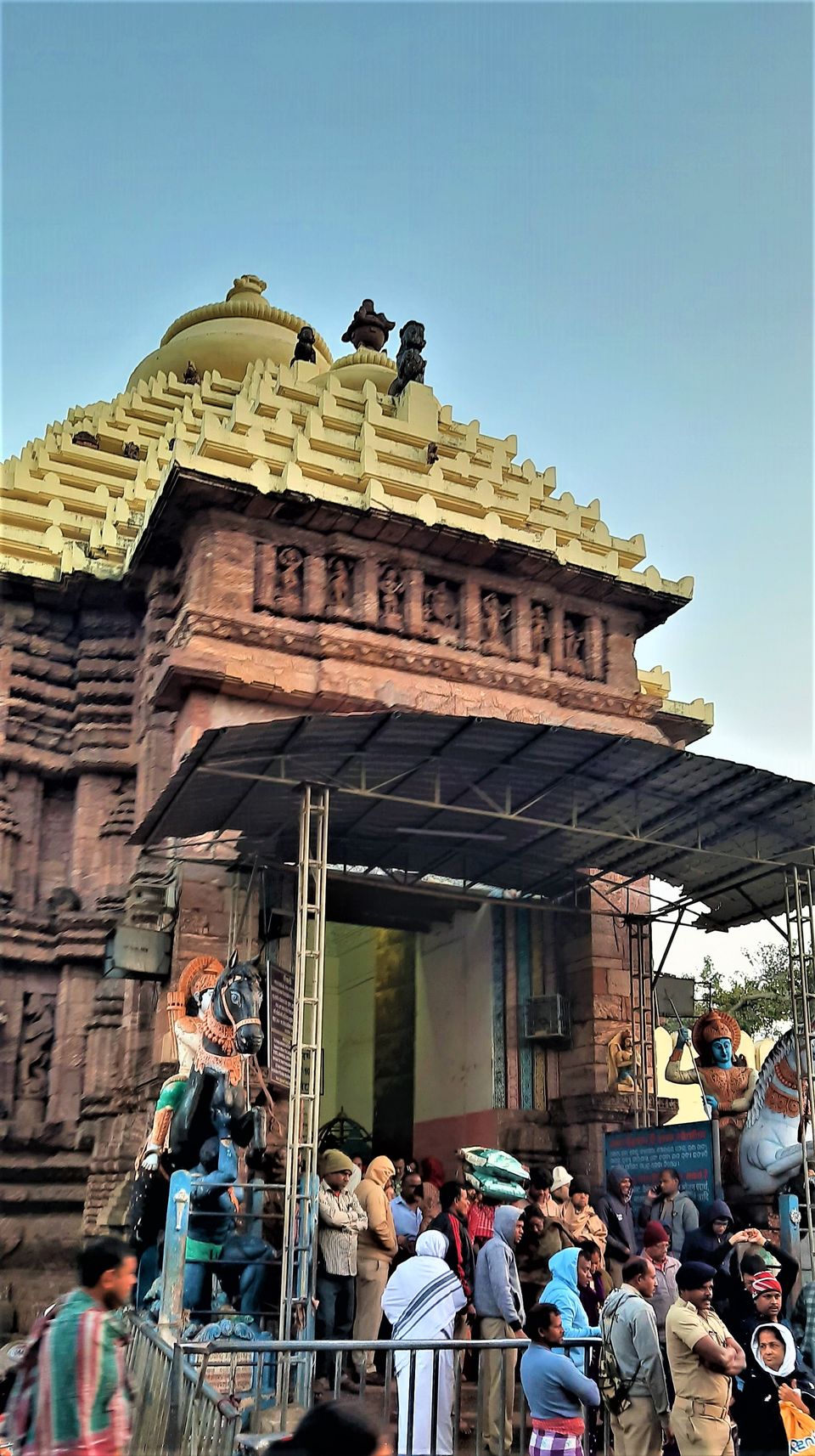 So, we visited the temple at 5.30 am in the morning and entered through the South gate or Ashwadwara (it is only open for entry till 6 in the morning), later it becomes one of the exit gates of the temple. And we entered inside, just like that, we felt so spiritual and cool enough though it was crowded. The pundit has explained all the engaging stories of the temple which made us awestruck and we really had a quick Darshan amidst hell lot of people crowding like ants to witness the deities of Puri temple. By the time, we reached the main temple (Garbha Gudi) we have witnessed the Snanabhishekam (bath rituals) to the deities. It was inexplicable. They literally dressed up the wooden idols in towels and placed a mirror in front of them and poured water (from the sacred well) in between the idols and the mirror. That was an eye feast. Later, we had to rush out of the temple. 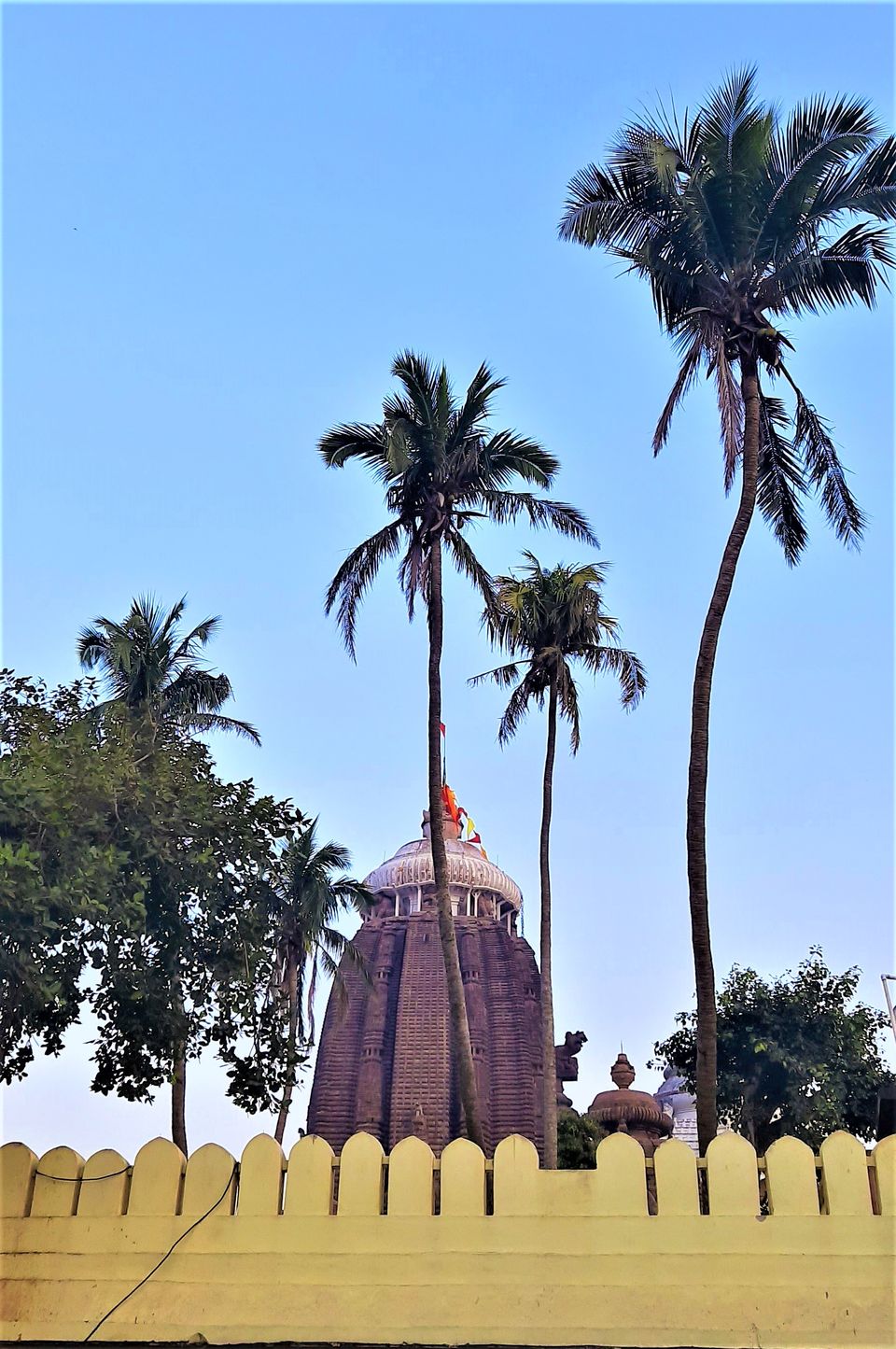 And then the real tour of the whole temple has started. The temple of Puri Jagannath Swamy consists of 120 small temples inside the whole premises which was surrounded by the hugely constructed wall on the four sides. The other main temples are of Vimala Devi, which is considered as one of the most important Shaktipeethas of India. It is to be known that, the navel part of Goddess Sati has fallen here at this place. The temple of Goddess Mahalaxmi is famous for its spirituality where hundreds of devotees perform Bhajans and kirtans every day. The temple of Kanchi Ganapati (idol given by the king of Kanchi) also situates here. The most interesting part is the idols of the Konark temple can be visited in this temple. The Konark temple of Odisha won't have the idols, hence people visit this temple to get the Darshan of Lord Surya. There are many other small temples of Hanuman, Garuda, Lord Shiva, Adi Shankaracharya and many more. 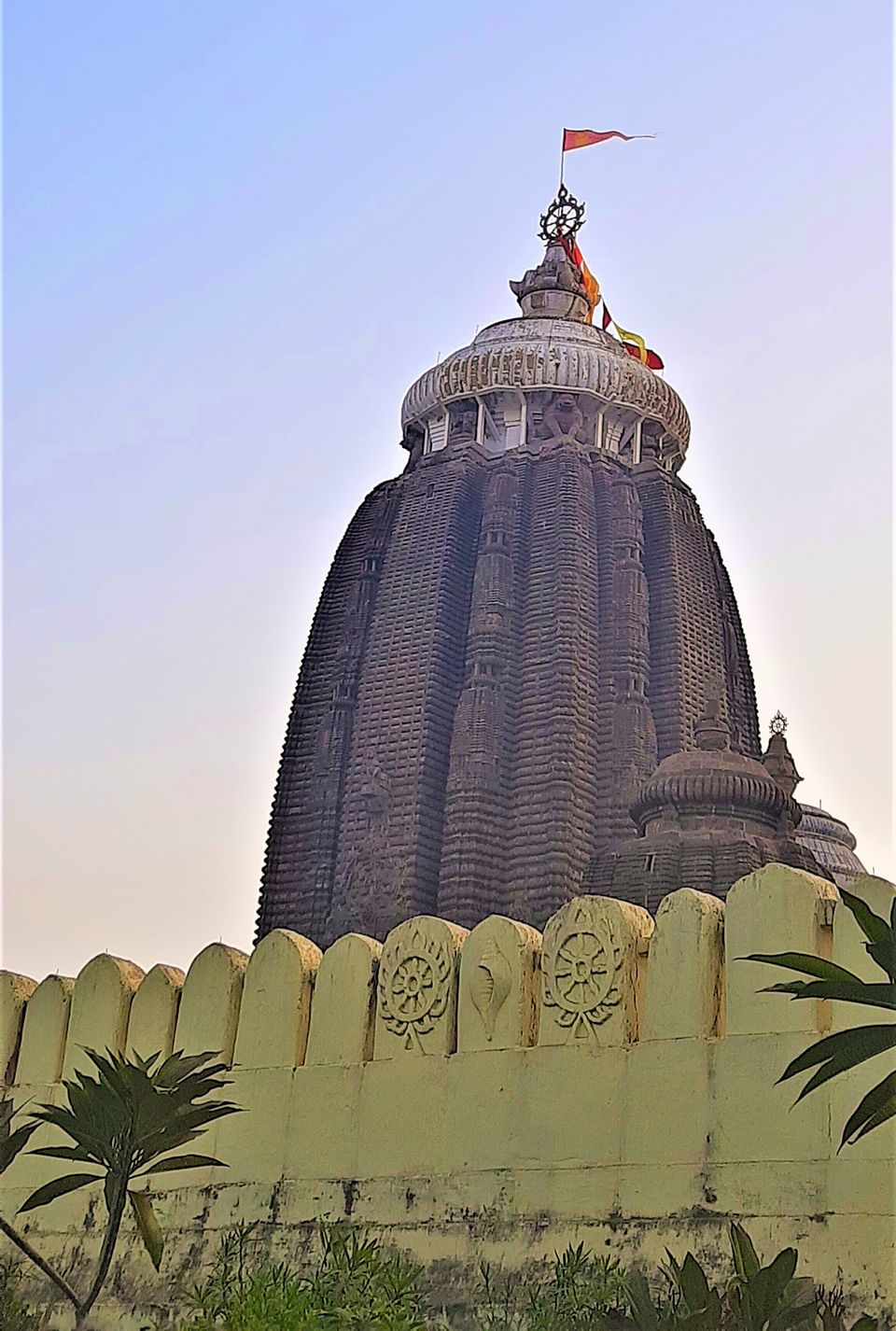 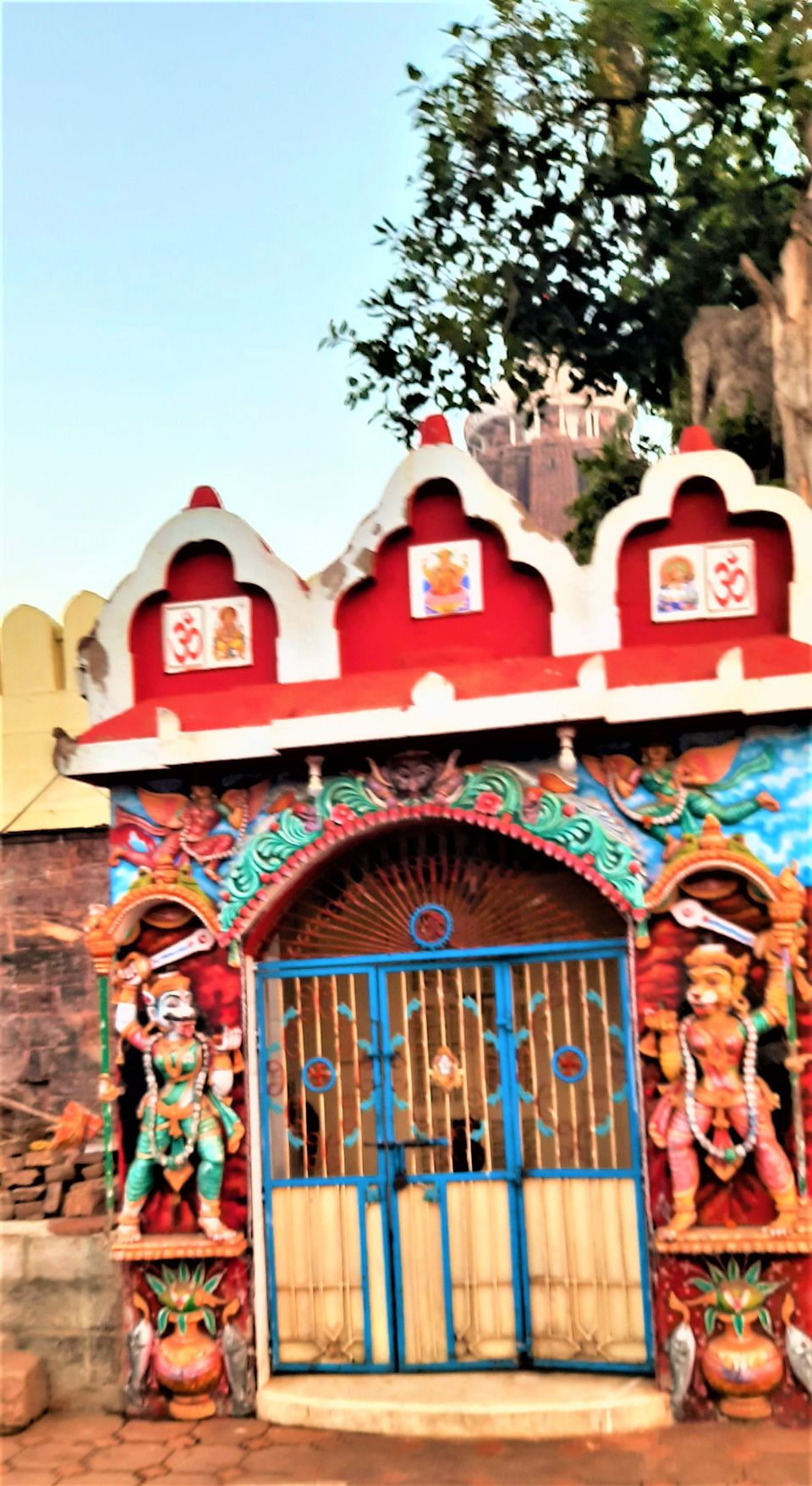 The architecture of these temples shouldn't be missed. One must notice at every temple. The construction is a wonder. The main temple is about 214 feet from the earth and it is purely constructed based on the art and architecture of Odisha. One can view the tribal art, mostly in the temple, as the temple was constructed by a tribal king and mostly tribal people worship the Lord Jagannath. As it was developed by the Adi Shankaracharya, there is an abode (matt) that can be seen on the premises of the temple and the doors are open every twelve or fourteen years. 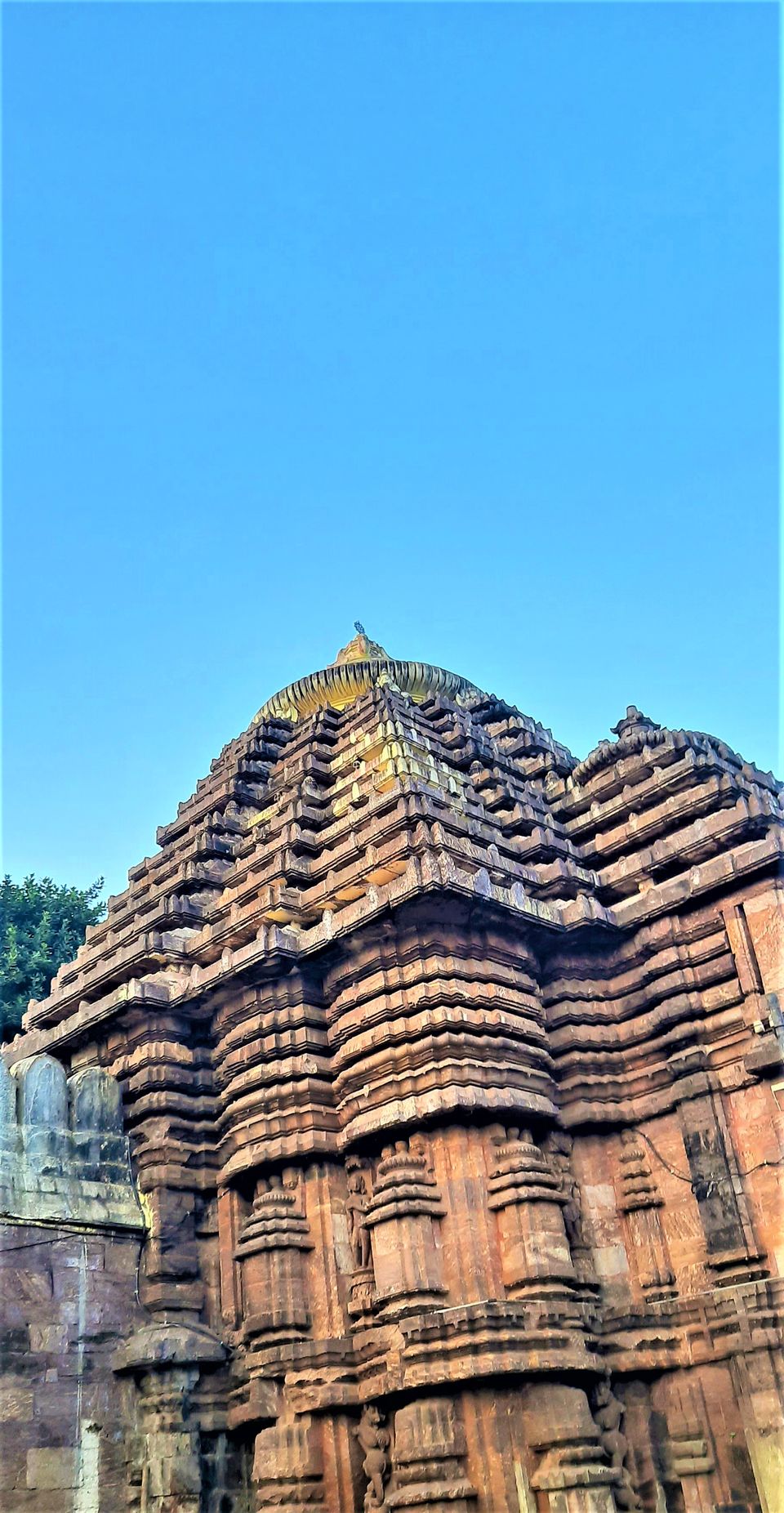 There are many wonders in the premises of the temple. The sound of the seashore can be heard in the whole city except inside the temple. The flag on the peak of the main temple architecture flies in an anti-clockwise direction which is opposite to the wind flow. The place near the main temple always is cold enough, regardless of the temperatures. The flag on the main temple which is at 214 feet, must be changed every single evening, by a member of the Panda family. That person uses chains to reach the peak to change the flag every day. And people can offer flags to the temple as an offering which can be put on the peak any day in the whole year. There are many little wonders in this holy place. And one must and will trust every single wonder under the name of faith on the Lord Jagannath.

Every year, many rituals happen in this place, which makes people keep on engaging with the place. A person must visit this temple, at least once in a lifetime. If you are not a believer of a religion, you can still visit this temple for its art, architecture, the stories, the people and the scenic beauty around the temple. The sunrise must be seen in this temple and the streets connected to the temple appear beautiful though they are always messy and rushy with people visiting the temple. 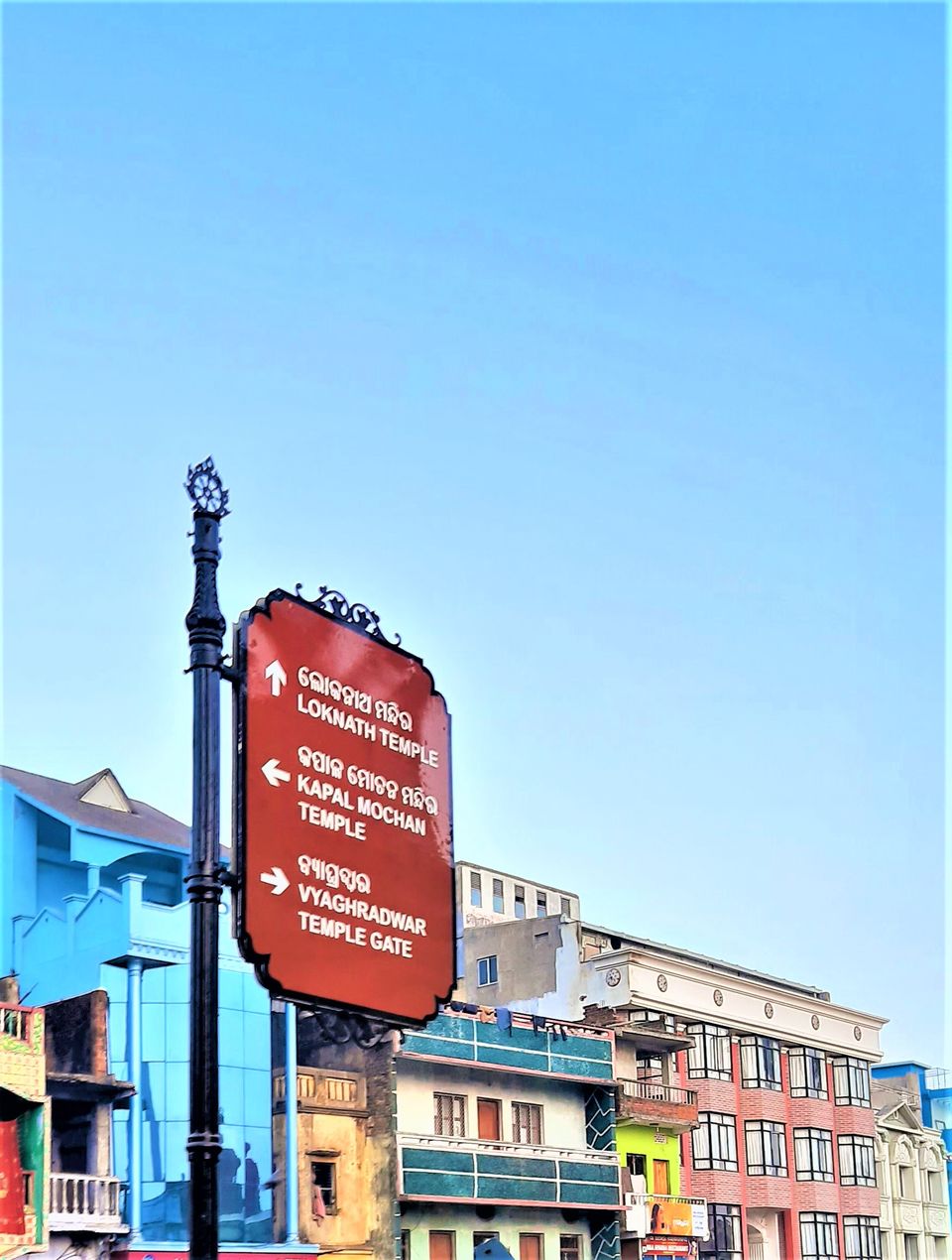 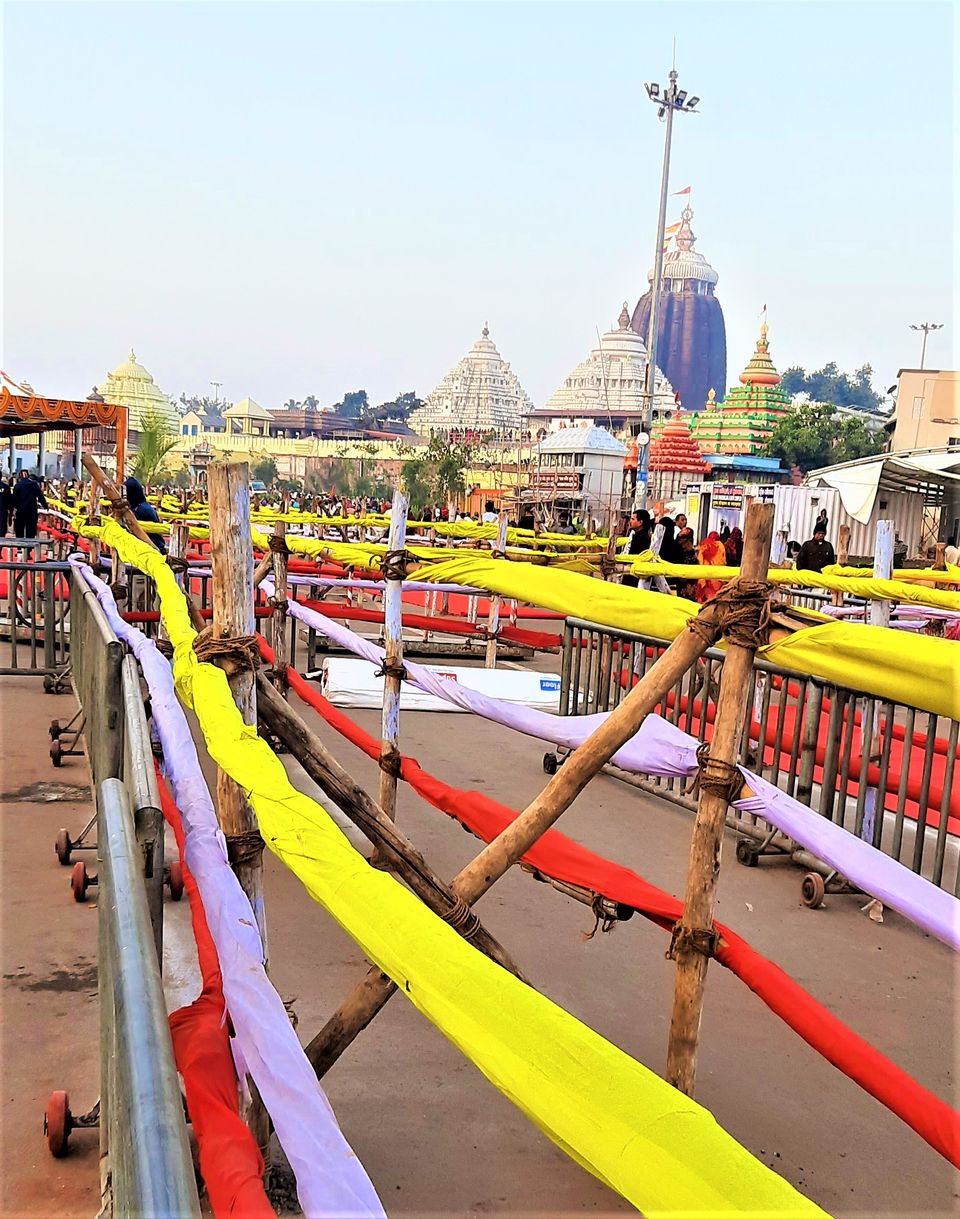 On the day we went, after the Darshan and after clicking many pictures of the temple by appreciating every single inch of the temple, we felt wonderful and fortunate enough to visit the temple. The feeling was inexplicable. There are four gates to the temple on the four sides North, South, East, and West, guarded by the sculptures of Lions (singhadwara), elephants (hathidwara), horses (ashwadwara) and tigers (vyaghradwara). Every sculpture, art, and architecture has its meaning and story behind it which have been carried forward since the ancient ages. It completely feels extraordinary to carry the heritage of India through temples and the histories behind them. 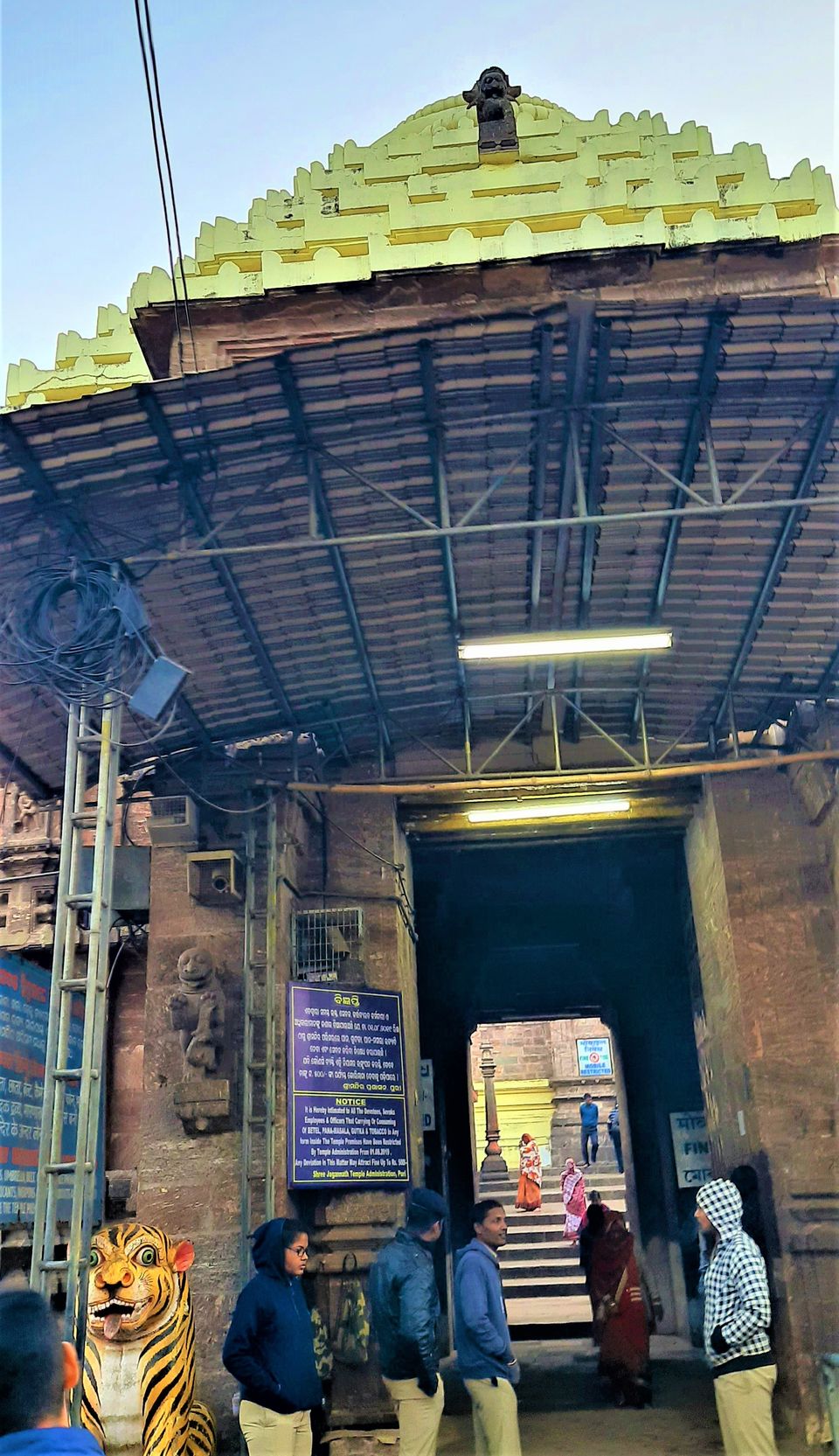 After we roamed twice around the huge premises of the temple, we have noticed thousands of people waiting in queues for Darshan. And there are many buildings near the temple, some are hotels and some are for inquiries and some restaurants. There are many street vendors who sell various types of photo frames, antique pieces, food, idols, and many more items. The police security is also very strict and makes people have Darshan in a safe manner. The best thing about Puri is the safety of people. The police always roams about the streets and the premises of the temple to take proper care of devotees and help them guiding towards the Darshan gates.

We successfully visited the temple of Lord Jagannath Swamy in Puri in a good way without any discrepancies. We were fortunate enough to get such a good Darshan and plenty of time to explore in and around the temple and the streets of Puri. Do visit this ethereal place to witness the heavenly vibes from the holy abode of the Puri Jagannath Swamy Mandir.