Travel in the Cedar Fragrance of Kashmir 6 Day Itinerary : Day 1-2 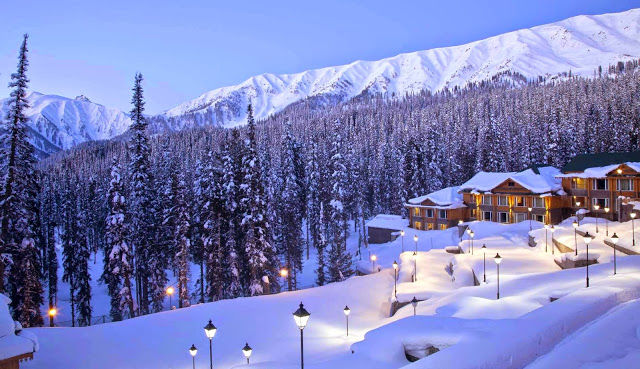 The exodus to the north began. Our plan to flee to the mountains is taking shape after our trip through Calcutta and Delhi. Our first stop will be in Kashmir. This region has 2 capitals, one for winter (Jammu) and another for summer (Srinagar). The objective is clear, to enter the Himalayas and enjoy, even for a while, its low temperatures.

We had 2 options to go by plane or by land (train to Jammu and then start going on mountain roads, if they were open). As a consequence of our way of traveling, trying to cover as many places as possible, we chose the second option, taking charge of how unviable it could be. Some of the discomforts of traveling by land at some point seduces us. We did not doubt it much and we took a train ticket to Jammu, our first stop in this exodus to the north.

The train to Jammu left early in the morning, at about 5 hours. We wanted to give the train a second chance since the first one had not been very pleasant. We left from a station much smaller than Delhi. The chaos was not so much. It did not sound so bad, but (There is always a but in all the stories). We arrived and the train was not announced. I was late. I ended up arriving at the station two hours later.

It took us a while to find the corresponding platform, and once we did, we discovered that we did not have assigned seats. We looked at each other, and chose random seats, assuming they would get us out of there at any time. Without knowing it, we ended up choosing not just a few seats of a train. We do not know well what we chose, but those seats resignified, in a certain way, our encounter.

Finally, we escaped the heat of Rajasthan, and I say "finally" although I liked Rajasthan very much. After several days enduring as much as 42-degree temperature, the body asked for respite. Amritsar is already behind, and the heat pushes us to the mountains.

A young boy sat before us. He smiles at us but the first part of the journey is treated with a cordial and distant dialogue. Within two hours of starting, and after having made numerous stops, the train stops. They announce that it will be there for at least one hour, under the midday sun. The young man tells us to get off and take a taxi. We did not know where we are. So again we dedicate ourselves to wait.

We wait. At the time the train starts. At the next station a marriage group board the train. They look at us and tell us something in Punjabi. I smile at them as a sign of having no idea what he is saying. The lady insists and points to the free seats. We tried to start a dialogue. The young man who had gone down earlier arrives at the minute.

From that moment the young man became the translator. Above all, she was very interested in us. She asked questions, which came to us translated. We answered and the answer was translated again. Despite the difficulty of the communication the lady did not stop looking at us and smiling.

We do not know very well how in those seats that did not correspond to us, a kind of everyday life was formed to which we were not accustomed. They asked us things, but they also told us other things. The young boy showed us pictures of his family and his work. They asked that we show them our photos. It's time to introduce ourselves. Our names were as difficult as we were for theirs, except for the lady.

The lady who looked at us and smiled at us, and with whom, in a certain way, we understood ourselves beyond the language. She told us that we were nice, and hugged us. She asked us if we were married. We laughed, we did not know what to say. Of course, we are not married but here the marriage has another value. The conversation continued.

After a while, before arriving at the destination she takes out her wallet. She also tells us that she will dedicate her morning prayers for our safety.

We arrived in Jammu. We said goodbye with a hug knowing that we would never see each other again, but at least we would not forget them so easily. We want to continue in the direction of Srinagar, but the sun is already leaning on the horizon. On a car, we make it out of Jammu and are just before sunset on the highway to Udhampur, on the way to Srinagar.

In Udhampur we find accommodation with some difficulty. All hotels and guesthouses are fully booked. Only in a dark, run-down part of Udhampur, we find a hotel room.

The next morning we are again at the roadside and it does not take long. Our driver makes sure that there is not a minute of silence inside the car. It's only 230 kilometers from Udhampur to Srinagar, but we'll need a whopping 15 hours to complete the route. After just a few minutes of driving together, we are stuck in the first traffic jam. We do not move two inches from the spot for two hours.

We fall into a trance just like our driver's never-ending monologues. But at some point, all that is over. We leave the mountains and drive into Kashmir. Srinagar and the sprawling Dal Lake are in front of us. 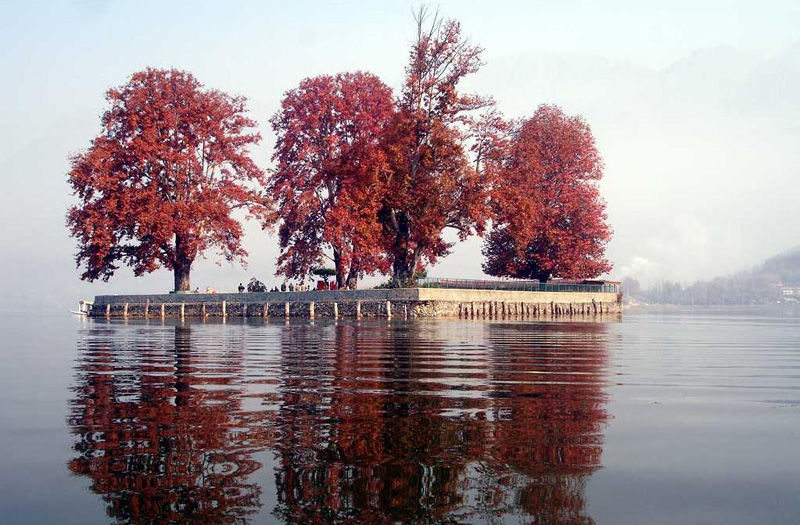 We arrived in Srinagar tired and are eager to start seeing a little more in the places we visited. So many kilometers and so many means of transport in a few days exhaust enough. The first thing that catches our attention is the prevailing security. Although it does not bother me as nothing seems to suggest that the situation is currently unstable.

We get off the bus and start walking looking for a group that brings us closer to the city. We get on with some in the car without knowing where we are going. The first thing that caught our attention was the lake. The landscape that appeared before us did not correspond to what we were seeing and knowing about India. Dal lake is accompanied by mountains and snowy peaks.

We stopped at Dal Lake and climbed to a shikara, a typical boat like the Venetian gondola, which is used for transport, both of goods and people. A boat that circulates around the lake takes us from the mainland to the houseboats. In the period between the 1960s and 70s, the houseboats of Srinagar experienced a moment of great fame when George Harrison (one of the Beatles) met Ravi Shankar to play the sitar.

We arrive at one that is quite good and the bargaining begins. Finally, after the uncertainty and haggling, we book for 3 nights with lunch, dinner, and excursions. It was the last days of Ramadan and the mosque next door would compulsively sound the prayers at a disproportionate volume for one hour each night, from 3 to 4 in the morning. The houseboat has several rooms. There is a large double room at one end.

There are other spacious rooms along with a corridor and a dining room and a living room at the other end. It goes to the terrace of the boat that overlooks the lake. Here I had a cup of tea in the Kashmiri style (terribly addictive) with almonds and cardamom and some bread.

From Srinagar, there is a kind of boulevard with shops on one side and a lakeside walk on the other side from where the shikaras are taken to go to the houseboats. From our houseboat, we take a ride in the shikara. During the boat ride, we see its old canals, the houses of the people. An imposing fortress, the Hari Parbat, completely dominates the city from the top of a nearby hill.

Srinagar lends itself to be walked, and we did it, knowing in passing the attractions of the place. The cold felt good, for the first time we had used a diver, and also a jacket! Srinagar is a city full of mosques like Jama Masjid with posters in Urdu. We walk through the old city to the green mosque, which is under construction because it was burned down two years ago.

Among all the mosques, Hazratbal stands out not for its charm but for its importance, as there is a relic of the hair of the beard of the prophet Muhammad. My visit was merely anecdotal: the classic "I was here and I took my picture", to continue with what I really like. It is to get lost in the city and converse with its inhabitants who, by the way, are of a hospitality that disarms.

We no longer saw temples or Sikhs walking down the street. The women and the different types of veils do not stop calling our attention. There are some who are all covered in the burka, where we cannot see their eyes. There are others whose eyes can be seen. There are still others who just cover their mouth and some more daring just cover their hair. Another new culture presented itself to us.

We approach the tomb of Jesus Christ. Yes, the tomb of Christ or his "alternative" grave, to be totally accurate. I had read several times about this legend of Rozabal. Not only did I find it locked with a padlock every time I went, but they also did not let me take any photographs of the building. At least I can say that the windows are open. They are large enough to see perfectly inside, where the coffin is located and where the body of Christ supposedly rests.

From there we go to Nageen Lake, which is spectacular. Water lilies are hunted by the winter. Their flowers completely bloomed are withering. The stems and the lotus leaves, stylized as in an Art Nouveau decoration, emerge from the mist, with tendrils laden with pink flowers like the sunset. Another thin shikara with canopy appears in the distance, then disappears and reappears like a ghost.

It passes beside us silently, occupied by a figure lying wearily on a sofa. This watery paradise evokes the Victorian romanticism. The haze thins out, revealing a sumptuous backdrop of mountains. There is the Pir Panjal. The guide takes us to a demonstration of making carpets even though I asked him not to do it. The gentleman tells me that if I do not want carpets, maybe I want pashmina shawl, sweaters or handkerchiefs.

Watching the lake from the houseboat, at night, is a marvel. Through the wide open windows, we can admire Dal Lake, and the full moon over the mountains that frame the wonderful view of the water, beyond which lies the region of Ladakh. The only noise that is heard comes from the splashing of the shikaras that cross the river. Srinagar was also the first place where we could sleep well, without so much heat.