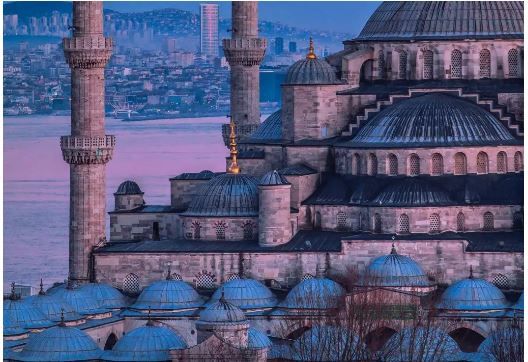 It was on 23rd April, 2015 when me and my travel mate were cruising around the assembly point of Bosporus and Marmara Sea, that it dawned upon us that “Yes, we have arrived in Istanbul!”. What comes as a first is that half of Istanbul is part of Asia and half of it is part of Europe and the encompassing Bosporus Bridge across Bosporus strait that divides Europe and Asia.

Comfortable in ‘out of comfort zone’

Istanbul is a multilayered city, with strong cultural and architectural heritages. Istanbul is a city which stands by the coast of Eastern Mediterranean.

We were put up in a Turkish Home-stay near Sultanahmet. Though the home stay was central to the most popular tourist spot yet the experience was very Turkish. The neighborhood was very local. A special mention of our hostess who prepared some of the most delicious Turkish breakfasts every day. Our day used to start having breakfast while enjoying the view of Marmara Sea.

The heart and soul of the city, and generous dosages of history – Sultanahmet !!

Istanbul is celebrating more than thousand years as a city, and Sultanahmet has been the capital of three great empires – Roman, Byzantine and Ottoman. It was my childhood dream to visit Constantinople (old name of Istanbul during roman dynasty) and the wish came true. The Sultanahmet Square bears testimony to some fascinating history and culture and yet at the same time, there is a distinct contemporary feel that engulfs a visitor.

The 17th century Iconic Blue Mosque is a part of Ottoman Architecture. Blue Mosque or Sultan Ahmed Mosque is famous for its six unique minarets, and this mosque is open for all to offer prayer. Wherever you go in Sultanhmet, you can see the minarets of the mosque, standing high and dominating the skyline of Istanbul. Standing in front of Blue Mosque I was contemplating as to why Blue Mosque is called Blue? The façade doesn’t even bear any hint of blue but as you enter the mosque, you cannot help but appreciate the striking blue tiles on the floor.

Sultanahmet square hosts one of the most unique and most visited monuments of the world- Aya Sophia or Hagia Sophia. Time for some trivia. At one point in time, Hagia Sofia was the largest dome-shaped building in the world. Have you ever heard that a church was turned into a Mosque? That’s precisely what happened with Hagia Sofia. This architectural wonder was first built as a Greek Orthodox church during 532 – 537 AD and later the structure was converted into Mosque during the ruling period of Ottomans. Hagia Sofia enjoys a special place in the history of architecture.

Culture wise, Hagia Sofia is a museum that redefines the maxim “East meets West”. I couldn’t help but appreciate the chandelier like structure made using the Turkish lamps. The frescoes on the mosaic tiles inside Hagia Sofia deserves a special mention. I wish I could have shared pictures of the soul-stirring frescos but then camera flash lights destroy the frescoes and we didn’t take any picture.

Tulip is the national flower of Turkey. The main square was beautifully decorated with colorful Tulips. The weather had a pretty distinct European feel and the slight drizzle of rains brought the temperature down. Imagine sipping a hot cup of Turkish tea in a café and enjoying the picturesque square.

We did also cover two of the most pivotal places in Istanbul; Topkapi Sarayi and Basillica Cistern. Sarayi stands for palace. Topkapi Sarayi happened to be the political epicenter of Ottoman Empire. In Turkish, “Topkapi” means “Gate of Cannons” and as you enter the Palace you could see huge cannons which were used during conquest are displayed outside the gates. The view of the Marmara Sea from the Palace Gardens deserves a panorama shot.

Well, that was our Sultanahmet sojourn. An integral part of this experience was Turkish food. Istanbul is famous for its seafood, which I thoroughly enjoyed and my partner had some lovely Turkish kebabs. Even when it comes to food, you experience the proverbial “east meets west” feeling.

Being a coffee lover, how can I miss mentioning Turkish Coffee? Well that’s something for you to experience. They have a very distinctive style of serving coffee, something that you will not find in any corner of the world.