Istanbul was first settled by Greek colonists in 667 BC near what is now Topkapi Palace in Sultanahmet. This peninsula was declared a World Heritage Site by UNESCO in 1985.

Originally founded as Constantinople, this large imperial city was an outpost of the Roman Empire. It was conquered by the Ottoman Sultan Mehmed II on 29 May 1453 and by the mid-16th century it was a major cultural, political and commercial centre. The Ottoman rule was defeated in WWI and Istanbul was occupied by the allies. This was followed by the War of Independence and the Republic of Turkey was born in 1923. Even though the capital city was moved to Ankara in the East, Istanbul remains Turkey’s largest city.

The public transport system is simple to navigate and will take you most places you will want to go. There are buses, trams, metro and light rail rapid transit (light metro), a funicular regional rail transport and ferries:

Istanbul has an integrated electronic ticket system for bus, funiculars, LRT, metro, commuter trains, ferryboats and trams. The system uses smart RFID cards, called Istanbulkart, as tickets. Ordinary cards may be acquired from offices at major transport interchanges for a refundable deposit of 10 TL. Afterwards, the cards can be loaded with credits at these offices, special purpose machines or at news-stands and small shops which offer this service

The most popular way to explore the Bosphorus is by ferry. You can take the Eminönü-Kavaklar Bosphorus Special Touristic Excursions (Eminönü-Kavaklar Boğaziçi Özel Gezi Seferleri) ferry from the Boğaz Hattı dock (No 3) at Eminönü daily at 10.35am. From June to September, there are extra services at noon and 1.35pm. A ticket costs 12.50 TL return, 6.50 TL one-way. The ferry stops at Beşiktaş, Kanlıca, Yeniköy, Sarıyer, Rumeli Kavağı and Anadolu Kavağı (the turnaround point). It is not possible to get on and off the ferry at stops along the way using the same ticket.

Taxis are readily available throughout Istanbul. Traffic is sometimes crazy, as are the drivers, but many are fine. Meters must always be used, but some will ask for a flat fare. There is a nighttime rate (midnight to 6am) which is 50% higher. Make sure you ask for the meter and watch out that they don’t put the nighttime meter on. You will be responsible for any tolls incurred over either of the Bosphorus Bridges.

Summer: June to August – Average summer temperatures range between 17°C/ 62°F and 26°C / 84°F. There is very little rainfall in the summer months and long days with much sunshine.

Spring & Autumn: March to May and September to October can be varied and cool. Average spring and autumn temperatures range between 7°C/ 44°F and 20°C/ 68°F. The temperatures are quite cool until the end of May.

Taksim Square is the heart of modern Istanbul. It is a major tourist area and known for its restaurants, shopping and hotels. It is also the main transfer point for the municipal bus system, the terminus of the M2 subway line of the Istanbul Metro, the nostalgic tram line (NT) on İstiklal Avenue to Tünel and the Fenicular (cable car) to Kabataş. Many protests and demonstrations have been held in Taksim Square over the years. The Taksim Square massacre of 1977 left 36 left-wing demonstrators dead, while two Leeds United fans were stabbed to death here during football riots in 2000. Following these terribly violent incidents, many group protests were banned. New Year’s Eve, Republic Day celebrations, the annual Istanbul Pride and mass-screenings of important football matches are excluded from the ban. Starting in Taksim Square, İstiklal Avenue is an elegant pedestrian high street home to numerous boutiques, stores, galleries, cinemas, patisseries, cafes, pubs and night clubs. Beyond this 1.4km street is a maze of the same, surrounded by late Ottoman era buildings from the 19th and early 20th centuries. İstiklal Avenue, with its surrounding avenues and alleyways, is sometimes referred to as the Paris of the East, is the modern day center of fine arts and leisure in Istanbul. 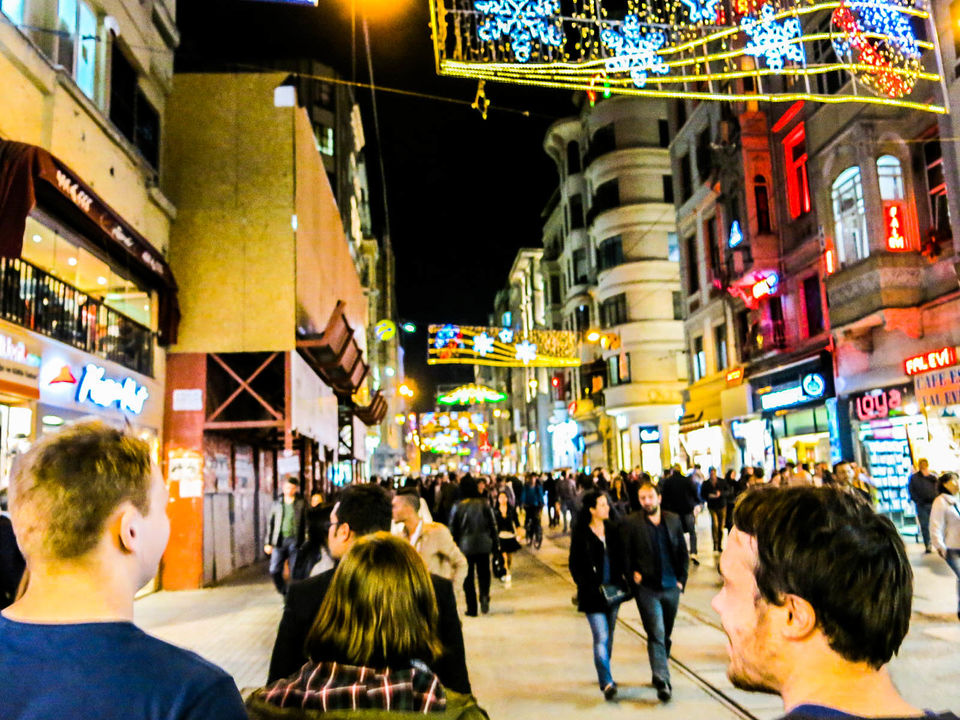 Hagia Sophia Museum (Ayasofya Muzesi in Turkish), also known as the Church of the Holy Wisdom, was a cathedral built in Constantinople during the 6thcentury AD under the direction of the Byzantine emperor Junstinian I. It was completed in 537 AD after only 6 years construction and it is now a component of a UNESCO World Heritage Site called the Historic Areas of Istanbul. The current building stands on the foundations of a pagan temple and ruins of the original church said to have been built in 325 and then rebuilt after fire in 404. A second fire in 532 provided Justinian I an opportunity to rebuild this splendid structure with its 32 meter dome and two smaller semi-domes. Marble piers and newly renovated outside walls support the massive dome, which has partially collapsed a number of times. Sadly, you can see sections of gold mosaics and tiles missing from this magnificent and colourful building from when it was looted by the Venetians and the Crusaders in the 13th century. In 1453 it was repurposed as a mosque before being converted into the museum you see today in 1935. (Hagia Sophia is closed on Monday. The winter visiting hours are from 09.00 to 17.00. Summer visiting hours are between 09.00 and 19.00. The final entry is one hour before closing. Passes are available at the box office in the museum. Entry fee is 25 TL.) 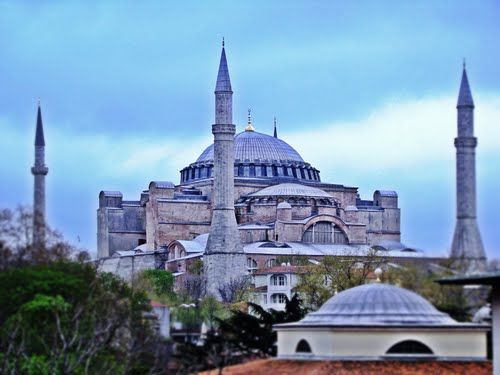 Just across the green Sultanahmet Park is the Blue Mosque (Sultanahmet Camii in Turkish). This historical mosque is known as the Blue Mosque because of blue tiles lining the interior walls. It was built during the rule of Ahmed I between 1609 and 1616. It is an example of classical Turkish architecture and it is the only mosque that was originally built with six minarets. There is a strict dress code for all visitors. Skin tight trousers, skirts and shorts above the knee will need to be covered and women must wear a head covering. Scarves and long skirts are provided free of charge. Plastic bags are provided at the entrance (free of charge) for you to carry your shoes in while you enter the Mosque. When you are inside the mosque, remain quiet and don’t use flash photography. Being a place of worship visitors should avoid staring or taking picture of those who are praying. (Opening times are May-Oct between 09:00 and 21:00, Nov-Apr between 09:00 and 21:00. The active mosque is closed to non-worshippers for 90 minutes during the five daily prayers and for the midday prayer on Friday. Entry is free.) Traveller Tip: Female head coverings: Place the fabric cover on top of your head with equal portions hanging on both sides. Take one side and wrap it around your neck, tossing it behind your back with covering your shoulders. Don’t cover your face, the covering is meant to hide your hair only. The best view of the Blue Mosque is approaching it from the Sultanahmet, or Hippodrome, to the west. 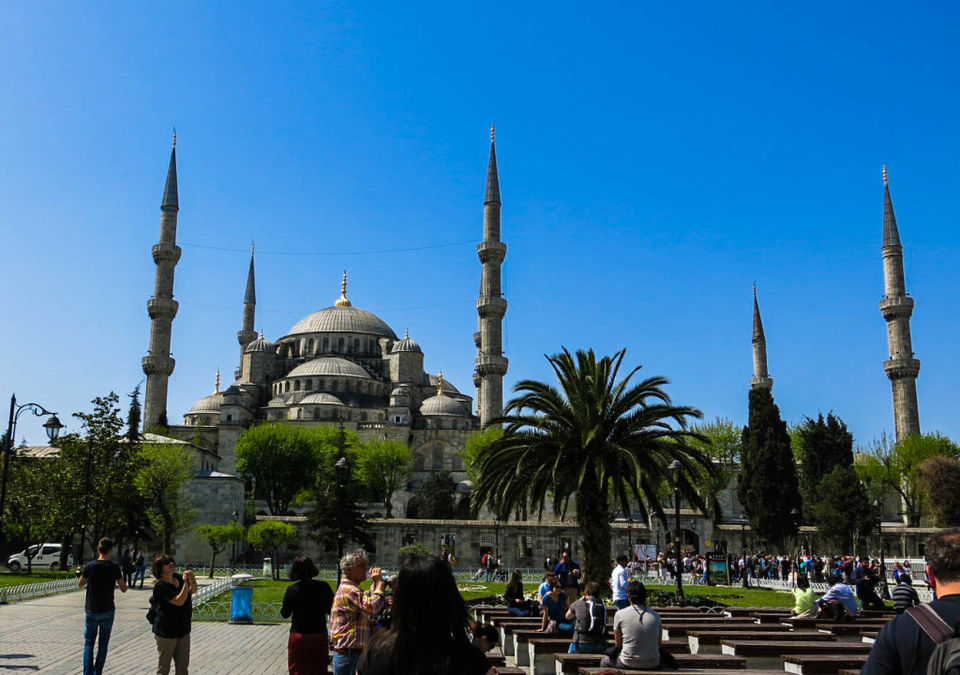 The Basilica Cistern is a giant underground cistern built by Justinian in 532 to provide water to the city in cases of siege. A wooden walkway floats above the fish filled water and winds between the pillars. Lights and piped music add to the eerie atmosphere and the statues of Medusa are impressive. (Opening times are between 09:00 and 18:30. Entry is 10 TL for non-Turkish citizens.) 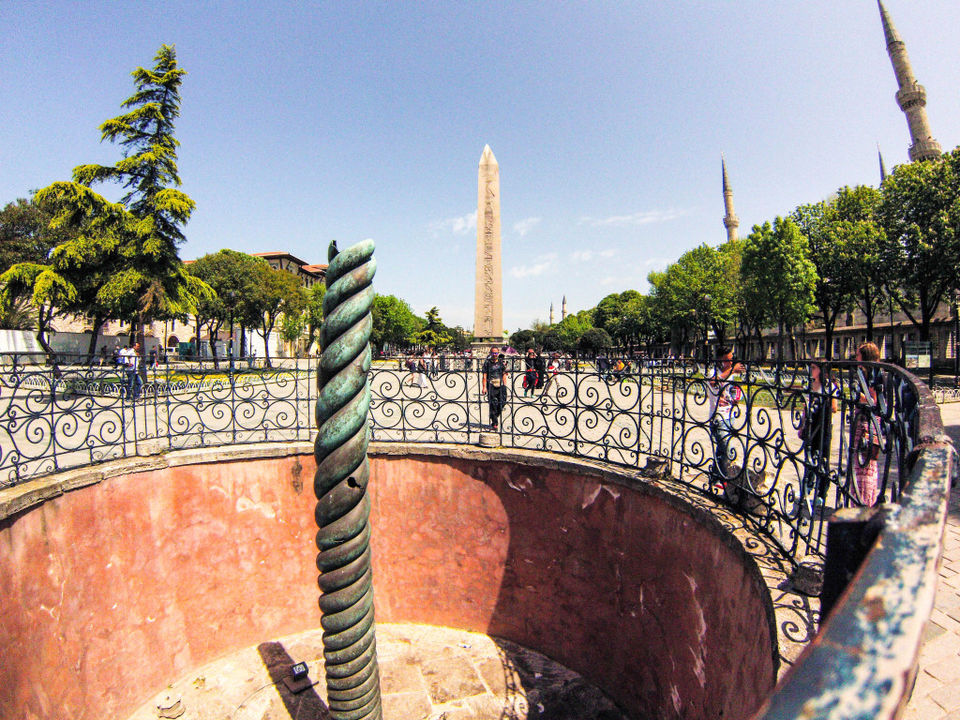 Behind the Hagia Sophia Museum are the Museum of Archeology (Arkeoloji Müzesi), and Topkapı Palace (Topkapı Sarayı). The Museum of Archeology (Arkeoloji Müzesi) contains a large collection of archaeological artefacts including Sumarian tablets, pieces of the wall of Babylon and Roman marble statues. The Treaty of Kadesh from the 13th century BC is also housed here, as well as what was once believed to be the very well preserved sarcophagus of Alexander the Great. (Opening times are Tuesday to Sunday between 09:00 and 17:00. Entry is 10 TL.) 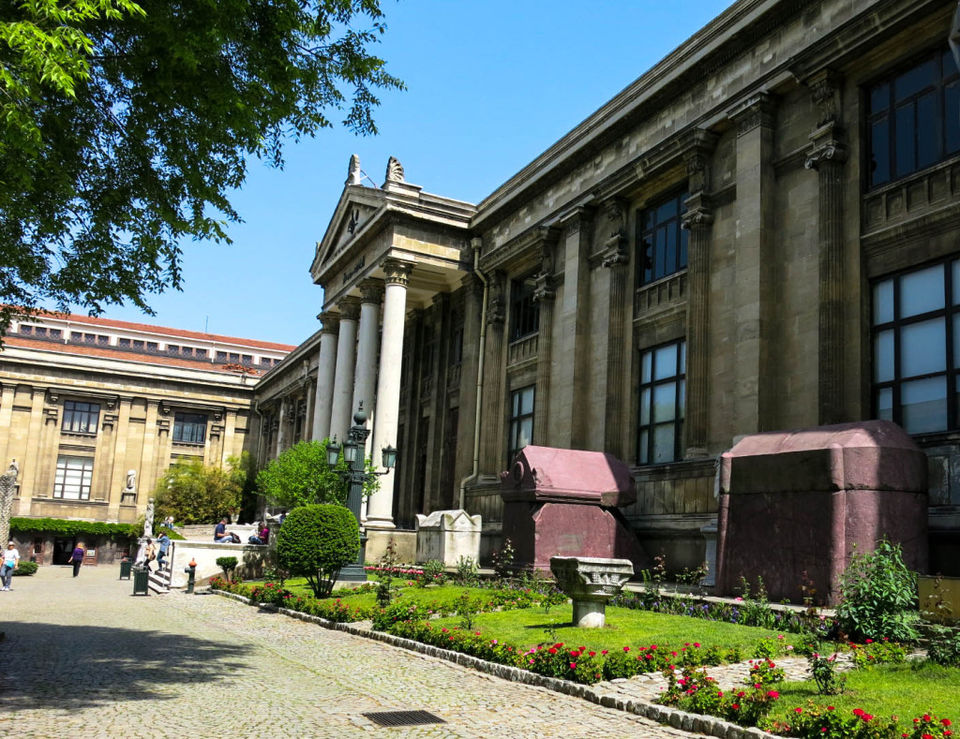 The Topkapi Palace (Topkapı Sarayı) is the imperial enclave of the Ottoman emperors for four centuries. It is lavishly decorated and houses some of the Prophet Mohammed’s belongings. (Opening times are Monday, Wednesday to Sunday between 09:00 and 17:00. Entry is 25 TL. Harem is 15 TL) 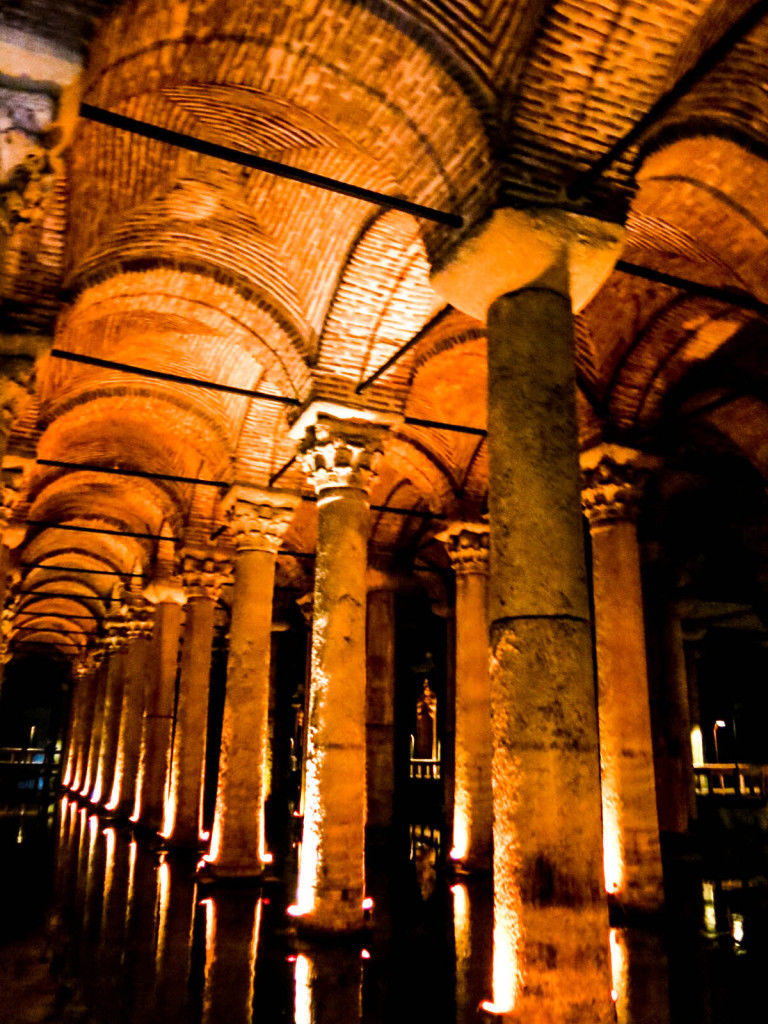 The Istanbul Spice Market was once the largest spice trading venue of the medieval world. Originally the Egyptian Bazaar, it has been used for the last 350 years as a market place for spices, medicinal herbs, incenses and oils. Some stores now emulate Grand Bazaar souvenir kiosks stocking scarfs and homewares. But you can still pick up full bodied spices from most stores. Check out the spices at the authentic Arifoğlu (#31). Other delicacies that you can pick up here are dried fruits and nuts from Malatya Pazari (#40 and #44), Turkish Delight, cheese and Turkish coffee. Özer (#82) is a Boudoir style shop offers hand-woven silk scarves and restored antique female clothes. (Opening times are Monday to Saturday between 08:00 and 18:00 and Sundays between 09:00 and 18:00) 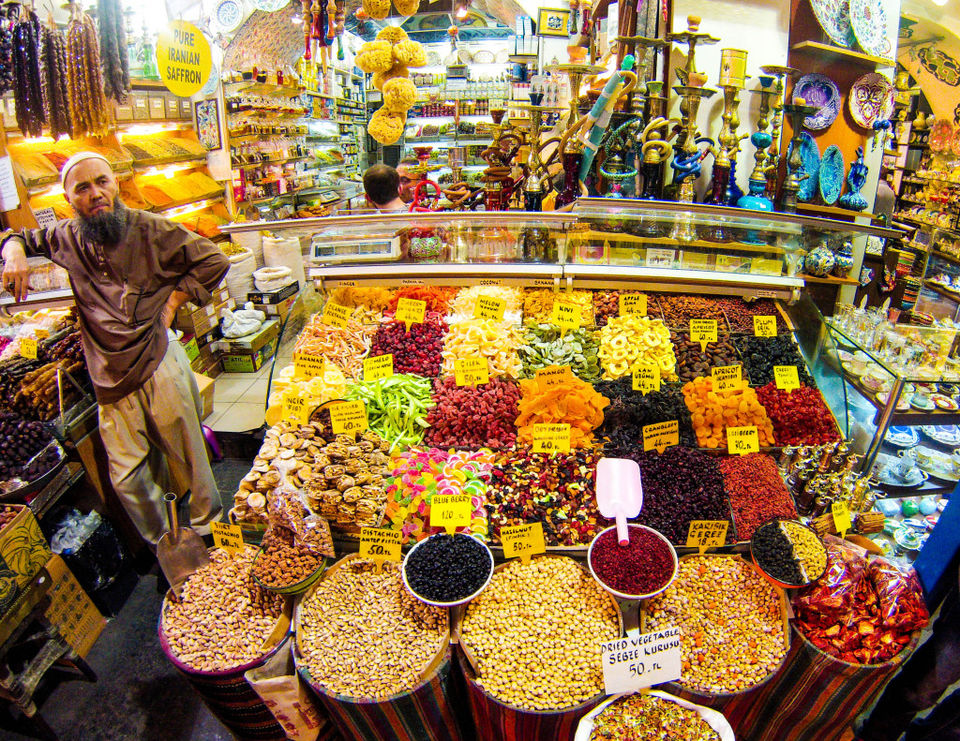 A trading center since 1461, the Grand Bazaar in Istanbul is one of the largest and oldest covered markets in the world, attracting between 250,000 and 400,000 shoppers daily. There are 61 covered streets and over 3,000 shops providing one of the most exciting shopping experiences. Here you can buy anything from fashion, jewellery, Turkish ceramics, carpets, textiles and spices. The complex houses two mosques, four fountains, two hamams, and several cafés and restaurants. In the centre is the high domed hall of the Cevahir Bedesten. To get there, take a tram to Beyazit, Üniversite or Sirkeci. Alternatively, the Grand Bazaar is around 15 minutes’ walk from the Aya Sofya/Blue Mosque area (Opening times are Monday to Saturday between 09:00 and 19:00. Closed Sundays and bank holidays) Traveller Tip: When shopping at the Spice Market or Grand Bazaar, taste before you buy, buy from a reputable, high-turnover supplier and pay in Turkish Lira. 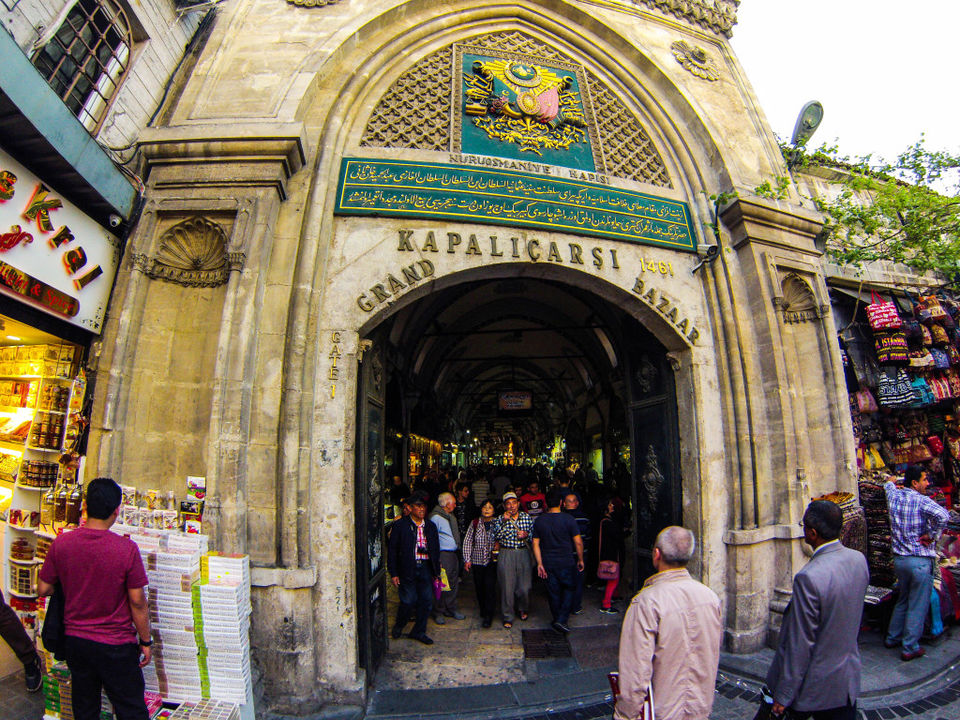 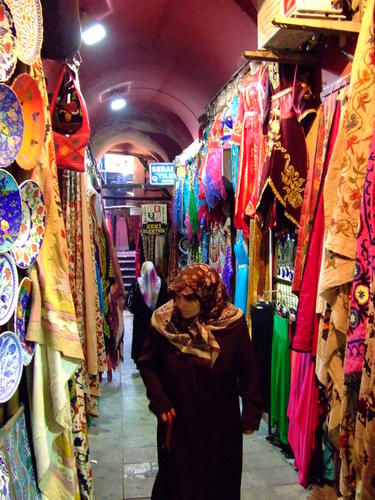 A Turkish bath, or hamam, can be a daunting experience. There are many historical baths located around Istanbul, but one of the oldest and most elegant is Çemberlitaş Hamam, Çemberlitaş. Alternatively, you can also check out Çemberlitaş hamam located on Yerebatan Street close to the Grand Bazaar or Beylerbeyi hamam close located right next to Beylerbeyi mosque. One of the fanciest hamams in Istanbul is the Kılıç Ali Paşa Hamam, Tophane. There are several different services that you can pay for at a Turkish bath. Select the Traditional Style if you want the real experience. An attendant will wash, exfoliate and massage you for about 15 minutes. You are usually provided with sandals and a cloth to be tied around your waist for modesty. Women and men are admitted separately. Men will usually be completely naked under their wrap, while some women might want to keep on their underwear (often not their bra). You will get drenched, you will be scrubbed bare and you will be expected to tip the attendant 10 – 20% of the total amount.