Belur - The Glory of Hoysala Temples 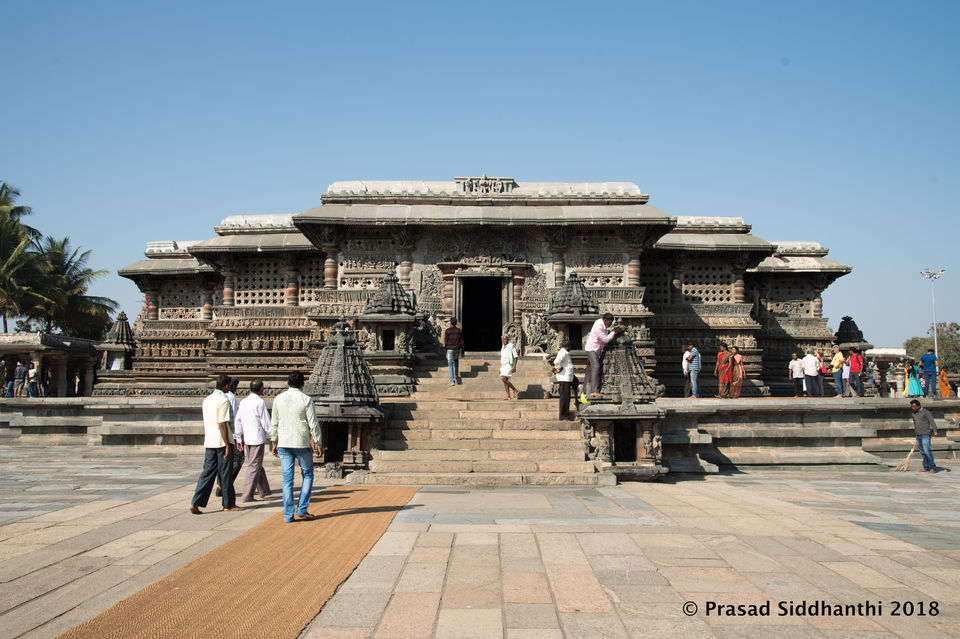 "Don't you wish you could take a single childhood memory and blow it up into a bubble and live inside it forever?" Sarah Addison Allen in Lost Lake.

This is my second visit to Belur. Belur is a small town in Hasan district of Karnataka, one of the districts in south of India.Belur is situated on either sides of the river Yagachi which is a tributary of river Hemavati. Belur is located at 13.7 degrees North 75.87 degrees East. It has an average elevation of 962 meters (3156 feet). Belur is 224 kms away from Bengaluru (the capital city of Karnataka State.

What attracts me to this temple is the greatness of the Hoysala Kings and the brilliant craftsmen/sculptors who have left behind such legacy which excels any man made monument in the world. I bring you the exclusive photographs I shot of this temple during my recent visit.

Who are these Hoysala Kings?

The Royal Symbol of the Hoyasalas has a great significance to the founding of the Kingdom. I was told about a popular folklore on how the name and kingdom was founded. In a near by village called 'Soseyuru' (daughter-in-law's village) there lived a Jain Monk by name Sri Sudattamuni. One day while teaching the students, a tiger from the nearby forest attacked the School. while everyone present were shocked, one young boy named Sala rushed to save his teacher. The teacher quickly threw a long stick at Sala and saying 'Poy-Sala' (hit it Sala). Sala fought the tiger and killed it. Sala grew up to become a chieftain and later formed the monarchy which over the year became 'Hoysala.

The most famous and efficient among the Kings who ruled the Hoysala Kingdom was Bittideva also known as Vishnuvardhana (1108 A.D - 1152A.D). The king respected the local customs, traditions, judiciary, religion, dance, music, fine arts and architecture. During his reign he constructed more than 100 temples all over the State.

I travelled by road in a car from Bangalore. The wide roads made my travel covering the distance of 224 kms so easy. Belur is well connected by road and rail. The nearest airports are in Bengaluru and Mangalore. The UNESCO declared heritage temples of Belur attracts thousands of tourists from all over the world.

The world famous Sri Chennakeshava Temple was built by the King Vishnuvardhana with the main presiding deity Sri Channakeshava (Vishnu) was consecrated on the 20th day of March 1117 A.D. Even today the deity is worshiped with the same rituals as it was done in 1117.

Every space is carved

The Hoysala architecture is very unique in its presentation. noteworthy among the sculptures are the female and male dancers. There are 42 bracket figures in this temple. These figures carved out of slate stone which is soft in nature was easy to cut and polish.

Belur - The Jewellery Box of the World

Before I dwell in detail about the bracket figures of the dancers, i would like to mention here that the exquisite detail of the ornaments; their design is like holding a mirror to the design world. Even today, I am told the designs of the jewellery is copied. The bangles freely move on the wrist and the necklaces appear that they are freely dangling round the slim necks of these dancers. I have not seen such work any where in the world.

A word about the master sculptors

These two master sculptors Jakanacharya and his son Dakanacharya. The imagination and creativity of these two created magnificent work of art.

More pictures of the temple

Accommodation: Decent accommodation is available in Belur between INR 500 - 2000. a night stay is suggested for detailed visit to the temple the next day early morning. The temple opens its doors by the sunrise.