Karnataka Travel GuideKarnataka TripsHassan- The Seat Of The Hoysala Empire.

HASSAN- The seat of the Hoysala Empire. 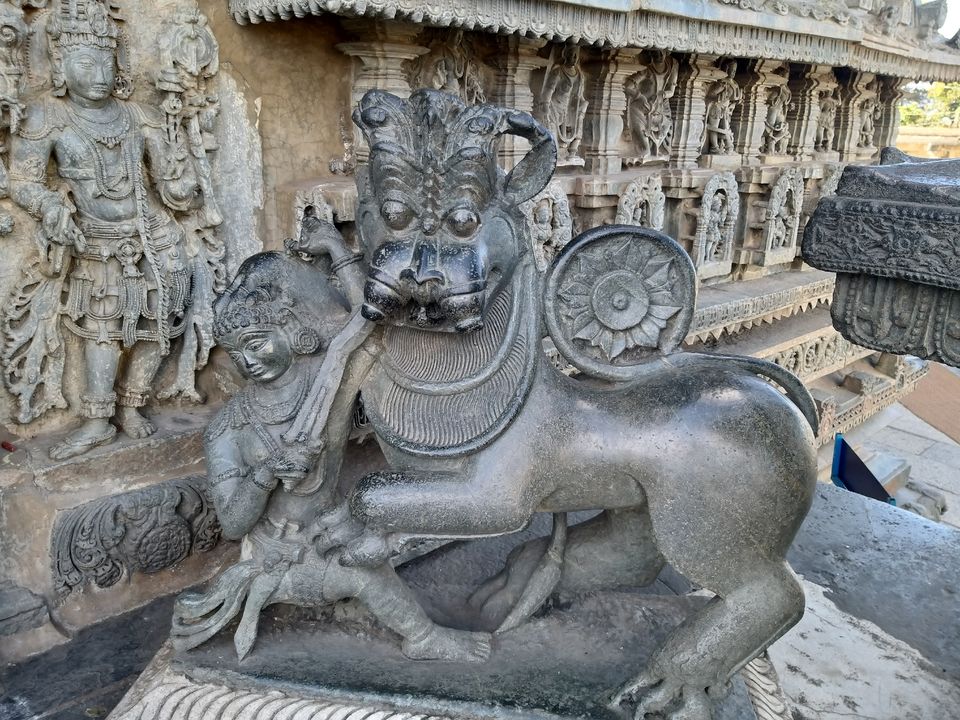 HASSAN- The seat of the Hoysala Empire.

If you want to witness the most beautiful footprint of history, Hassan is just the place for you. I have described the history of hoyasala empire, stories behind the architectural beauty and the must do things in Hassan, below.

Hassan is a district in Karnataka, 182.9 kms away from Bangalore city. It takes about 3.5 to 4 hours to reach there from Bangalore. I suggest everyone to come here and stay for atleast 2 days as there are many places to explore here. The best time to visit Hassan is during the Monsoons I.e from June to September OR in winters I.e from November to February.

PC: This place is nice to explore when you are on a road trip.

Hassan district was the seat if the Hoysala Empire, which at its peak ruled large parts of South India from Belur, as its early capital and Halebidu as its later capital during the period 1000-1334 CE.

The district is named Hassan after the Goddess "Haasanamba", the Goddess and the presiding diety of the town.

Hassan was ruled by mainly two dynasties i.e Western Ganga dynasty of Talakad and Hoysala Empire. Later after the invasion by the Delhi Sultans, weakened the Hoysala Empire and it became a part of Vijaynagara empire.

When you visit this place you can see that most of the architectural beauty has been destroyed and only few are protected by the Government of India.

BY AIR: The nearest airport from Hassan is at Bengaluru (180Kms)

BY RAIL: The Hassan railway station is around 2Kms, East of the town. It is connected with Bengaluru, Mysuru and Mangaluru by regular trains.

BY ROAD: Hassan lies on the National Highway connecting the port town of Mangalore with Bangalore. It is also linked with important places like Chikmagalur and Mysore. One can reach Belur and Halebidu via Hassan.

NOTE: It is advised to travel light. Light cotton clothing is ideal to wear.

THE PLACES TO VISIT:

This place is worth the visit as you will get to know the rich heritage of India. This place is basically famous for Goddess Lakshmi temple built in 1113 AD by Hoysala kings.

This temple is build according to Vastu Shastra i.e "science of architecture ". You can even see "Egyptian and African" influence in India. Do hire a guide for more information. This really is a place worth the visit.

"video about the information of the temple. "

Beautiful Belur, the quaint little town set elegantly on the banks of the river Yagachi amidst lush surroundings was earlier known as Velapuri.It was choosen as the capital of the Hoysalas, after the sacking and destruction of their capital at Dwarasamudra (Halebid), by the Delhi sultans. The Hoysalas ruled this region between 11th and 13th centuries. They were great patrons of art and architecture and built a number of magnificent shrines during their 300 year reign.

Belur was highly revered for its magnificent shrines and came to be known as the 'modern vaikunta' or heaven of the Earth.

The Hoysala Temples are characterized by a typical star shaped ground plan and are usually set on a platform. They are compact squat structures and more human in scale as compared to other soaring shrines of the South. The ornately carved shrines indicate that music and dance commanded great respect during the rule of Hoysalas and where used to to express religious fervor. The Temples at Belur are carved out of soapstone (steatite).

The magnificent shrine dedicated to lord vijaynarayan, one of the twenty four incarnations of Vishnu was built to commemorate the victory of Hoysalas over the Cholas in the great battle of Tallakad. Some also believe that it was constructed when Vishnuvardhana adopted Vaishnavism under the influence of the great Guru Sri Ramanujacharya.

The construction of the temple commenced in 1116 AD at the instance of king Vishnuvardhana, his son and later on, his grandson completed it. According to historical records, it took about 103 years to complete this profusely sculpted masterpiece of Hoysala architecture.

The huge temple complex enclosed by high walls has a Garbha griha ( sanctum sanctorum), a sukhanasi (vestibule), a navagraha mantapa. The complex also has many smaller shrines, mantapas and other structures.Virtually every inch of the shrine is intricately carved. The outer walls are adorned with the carvings of elephants, lions and scrolls of small female figures in ornamental niches and intersected here and there by larger vertical images.

NOTE: Do hire a guide if you like detailed explanation.

A small town of Halebidu, literally means an "old encampment" in Kannada Language was the glorious capital of the Hoysalas during the 11th century, it wa sthen known as Dorasamudra or the "Ocean of Dora" in sanskrit after a huge 9th century artificial lake or tank that formed the eastern boundary or Dwaravati. Since the 19th century the tank and the town have also been called as "Dwarasamudra" or "gate to the ocean"

This magnificent shrine dedicated to lord Shiva is the largest and the best of Hoysala temples. Its construction was started in 1121 by Ketumalla setti, one of the officials of King Vishnuvardhana and could be completed only by 1207. The construction work of this temple continued for around one century and some believed that it remained incomplete, as there are no towers and some unfinished portions in this amazing edifice can be observed. The temple resembles Chennakeshava temple at Belur, except for the more profusely carved' exquisite figures adorning the shrine.

The unique temple complex built with soapstone has four porches for entry and the lateral entrance towards northern side is now used as main entrance.

Thousands of intricately carved sculptures depicting scenes from the epics Ramayana and Mahabharata, puranic legends, beasts and beauties etc adorn the temple walls.The horizontal and vertical friezes create a marvelous interplay of light and shade. The lower portion of the temple is decorated with one of the most richly sculptured friezes which run continuously along the walls. The sequence of the carved layers of friezes from bottom upwards is as follows-

1,Innumerable elephants carved in a single file in the lower most section

Above the friezes are larger figures of various mythological deities of Hinduism. The upper portion of one wall has beautifully perforated screen, a hallmark pg Hoysala art and exquisite figures of divinities ares et on the pedestals crowned by canopies.

The majestic triple shrine or trikuta temple located southwest of Hoyeshleshwara temple is dedicated to lord Shiva. It was built by Hoysala king Veerballala 2 (1173-1220)

The beautiful star shaped structure amidst a quiet garden is set on a high platform called jagati which is typically 5 to 6 ft in height and can be reached by a flight of steps.

Due to years of negligence, the magnificent structure fell into disrepair and crumbled down.The restoration work of the temple was undertaken in the 1890's but the original glory could not be regained and many panels are out of place.

The panels depicting scenes from Ramayana, Mahabharata and Bhagavad Purana and the figures of deities represented above them are noteworthy. It is now protected as a monument of national importance by the archaeological survey of India.

Jainism also flourished during the rule of the Hoysalas, although its patronage by the ruling class is said to have substantially decreased after the 12th century AD. Halebidu has three exquisite Jain shrines set within a prakara to the south of Basadi halli, not far from the Hoysaleshwara temple. One of the most magnificent Jain Basadi is described below.

This temple is dedicated to lord Parshvanatha Swamy the 23rd Jain Thirthankara is the most important Jain Basadi in the group. It was built in 1113 by Bopanna the son of Gangaraja, the famous minister under Hoysala king Vishnuvardhana. It is adorned with splendid sculptures and elaborate carvings and the finely polished mirror like 12 pillars in the navaranga as well as the ornately carved central ceiling in a marvel of architecture. The sanctum enriches a 18ft high granite stone image of Lord Parshwanatha Swamy with the hood of seven headed serpent above it.

Well these are the places i visited in Hassan in a day, well i suggest you to spend your time here for at least two days and visit other places like Shravanabelagola and other monuments which tells us the greatness of our rich Indian Heritage, also you can spend time shopping. You can buy stuffs like Pure silk,sandalwood,ivory handicrafts and jewelries at Hassan.