Belur - Poetry in Stone..Intricate,Detailed and Unimaginable 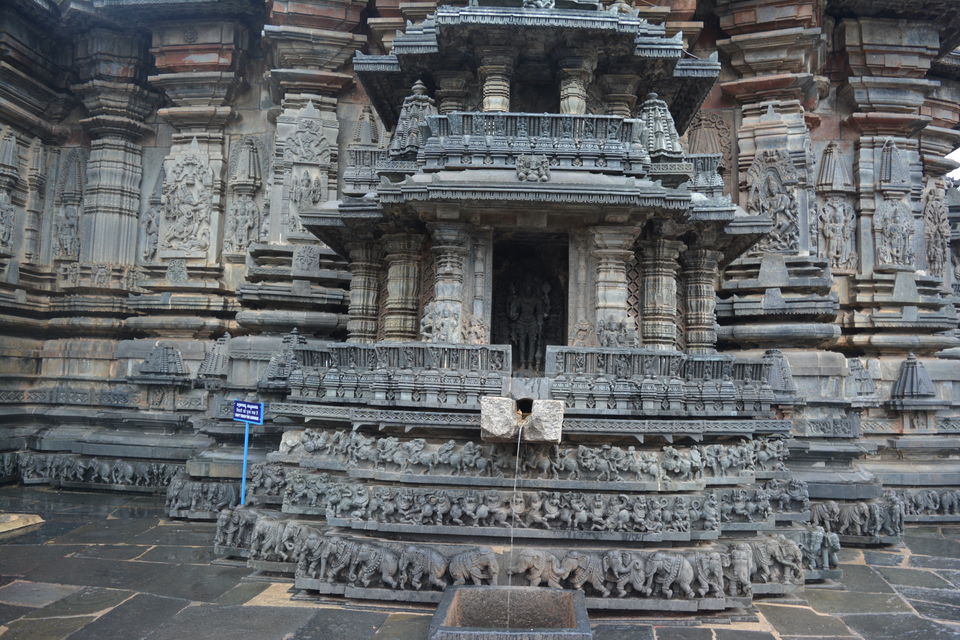 Belur was the early capital of the Hoysala Empire. Belur along with Halebidu about 16 km away are one of the major tourist destinations in Karnataka. Belur is located in Hassan district.

According to inscriptions discovered here, it was also referred to as Velur or Velapuri. It was the early capital of the Hoysala kings in 11th-century and remained a second capital through the 14th-century. The city was so esteemed by the Hoysalas that it is referred to as "earthly Vaikuntha" (Vishnu's abode) and "dakshina Varanasi" (southern holy city of Hindus) in later inscriptions. So many workers worked for building Belur.It took 190 years to complete.

The Chennakeshava Temple, also referred to as Keshava, Kesava or Vijayanarayana Temple of Belur, is a 12th-century Hindu temple in the Hassan district of Karnataka state, India. It was commissioned by King Vishnuvardhana in 1117 CE, on the banks of the Yagachi River in Belur also called Velapura, an early Hoysala Empire capital. The temple was built over three generations and took 103 years to finish.[1] It was repeatedly damaged and plundered during wars, repeatedly rebuilt and repaired over its history

The temple is dedicated to Vishnu and has been an active Hindu temple since its founding. It is reverentially described in medieval Hindu texts and remains an important pilgrimage site in Vaishnavism. The temple is remarkable for its architecture, sculptures, reliefs, friezes as well its iconography, inscriptions and history. The temple artwork depicts scenes of secular life in the 12th century, dancers and musicians, as well as a pictorial narration of Hindu texts such as the Ramayana, the Mahabharata and the Puranas through numerous friezes. It is a Vaishnava temple that reverentially includes many themes from Shaivism and Shaktism, as well as images of a Jina from Jainism and the Buddha from Buddhism. The Chennakeshava temple is a testimony to the artistic, cultural and theological perspectives in 12th century South India and the Hoysala Empire rule

The temple is a ekakuta vimana design (single shrine) of 10.5 m by 10.5 m size. It combines elements of North Indian Nagara and South Indian Karnata style architecture.The temple stands on an open and wide platform designed to be a circumambulatory path around the sanctum. The temple and platform were without walls and the platform surrounded an open mantapa, following the contour of the temple. A visitor would have been able to see the ornate pillars of the open mantapa from the platform. Later walls and stone screens were added, creating an enclosed vestibule and mantapa, providing security but creating too much dark to appreciate the artwork inside. The vestibule connects the circumambulatory platform to the mandapa (hall). There is intricate and abundant artwork both on the outside and inside the temple.

The temple has a simple Hoysala plan and features one sanctum. The building material used in the Chennakesava temple is chloritic schist, more commonly known as soapstone. It is soft when quarried and allows artists to more easily carve details. Over time the material hardens.

The visitor sees numerous artwork during the circumambulation of the temple over the jagati platform in horizontal bands. The bottom band is of elephants with different expressions, as symbolic supporters of the entire structure. Above it is an empty layer, followed by cornice work with a periodic lion face. Above it is another band of scroll and then cornice band, except at the back of the temple where a row of horsemen in various riding positions are depicted.

The four friezes or steps of carving that forms the base explains the qualities of a great king, Elephants in the lowest frieze denotes the stability & tremendous strength, above these are the lions that symbolize courage, next are horses showing speed and finally creepers & flowers representing the heart of the king as mild and considerate towards his people.

Above these bands is later construction that added 10 perforated stone windows and screens to north side and 10 to the south side of the temple. The later artists engraved Purana scenes in ten of these later additions, and the other ten have geometric floral designs. The perforated screens with characters show

Above the perforated screens, on capitals of the supporting pillars, are madanakai (Salabhanjika) figures.

There were originally 40 madanakai, of which 38 have survived in damaged or good form. Two of these are Durga, three huntresses (with bow), others are dancers in Natya Shastra abhinaya mudra (acting posture), musicians, women dressing or doing make up, a woman with a pet parrot, men making music. A majority of these madanakai figures are also carved into miniatures in the sixth band of the outer wall around the pradakshina patha

The wall also features 80 large reliefs around the temple. Of these 32 are of Vishnu, 9 of his avatars (Narasimha, Varaha, Vamana, Ranganatha, Balarama); 4 of Shiva in various forms including Nataraja (with or without Parvati); 2 of Bhairava (Shiva); 2 of Harihara (half Shiva, half Vishnu); 4 of Surya (Sun god); 5 of Durga and Mahishasuramardini; 1 of Kama and Rati; 1 of Ganesha, Brahma, Saraswati, Garuda and Chandra. Other major reliefs are of Arjuna shooting an arrow to win Draupadi; Ravana lifting the Kailasha; Daksha, Bali and Sukracharya

The navaranga in Kesava temple at Belur is the largest of any Hoysala temple, is of triratha diamond-shaped layout

The navaranga hall has forty-eight pillars. All except the central four are carved in a unique way. The central four are later additions, added in 1381 CE during the Vijayanagara Empire era, to support the internal structure of a damaged temple. The pillars are of three sizes. Two pillars are particularly notable. One is the so-called Narasimha pillar which is carved with miniature figures from top to bottom, such as a tiny bull.

The local legend states that this pillar once could rotate because of how it was supported, but it no longer can be rotated. The other pillar is the Mohini pillar. Other than the female avatar of Vishnu, the pillar has eight bands of carvings, including those of Brahma, Vishnu, Shiva, then ten avatars of Vishnu, the eight direction deities, mythical animals with the body of a lion but the face of other wildlife. The four central pillars are notable for having been hand carved while the others were lathe turned.

In the center of the hall is a large open square, above which is a domed ceiling about 10 feet in diameter and 6 feet deep. At the top is a lotus bud with Brahma, Vishnu and Shiva carved on it.

Probably this sculpture is a fine example of how we value our heritage sites. This carving depicting the Draupadi swayamvara from Mahabharatha where Arjuna shoots an arrow at the fish eye supposedly produced musical notes when tapped on it.

Declared as a UNESCO world heritage site, I was awestruck with the grandeur and the intricate details of the temple sculpture. It is worth time spending there and one cannot stand apart in appreciating the Belur temple.