We started the day with breakfast at Mayura Hotel, they serve South Indian varieties and kesaribhat is must try here.

We started our journey to Belavadi to visit Veer Narayan temple built in 1200 CE. It is said to be the place mentioned in Mahabharata where Pandava prince Bhīma killed the demon Bakasura and protected the village and its people, Belavadi is 29km drive from Chikmaglur town.

This is one of the largest temple built by Hoysala kings, this temple is known for its architecture. The roof are well decorated with some intrinsic work, in one of the roof the Lord Krishna playing flute is beautifully carved. The images of Hindu Deity are carved on the roof and also at the outer walls. The temple is made in form of Star (Shriyantra). The pillars have been made to keep diyas to enlighten the temple. 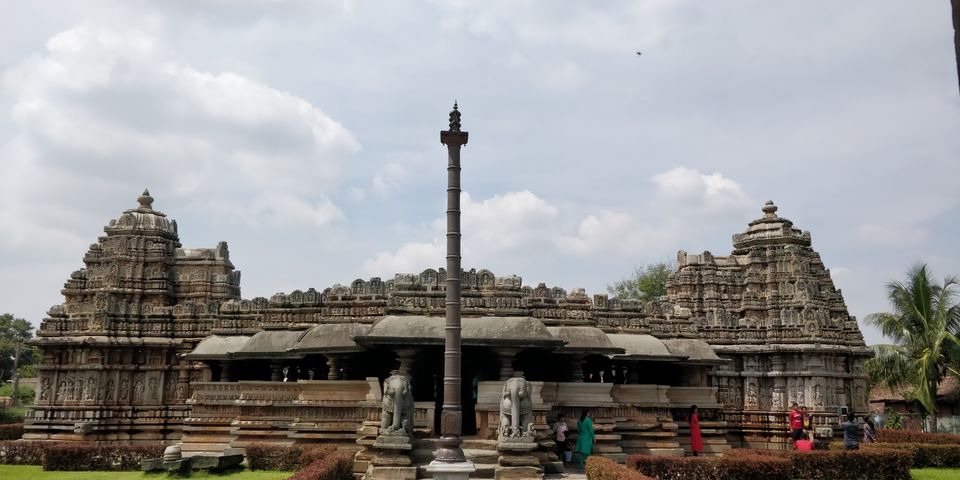 This is another 12th century temple built by Hoysala kings dedicated to Lord Shiva. Halebidu was former capital of the Hoysala Empire. It is 12km from Belavadi and 16km from Belur. It is the largest temple build by Hoysalas, took approx. 40years to complete, was attacked twice by Mughals but the intrinsic designs are largely intact. It has two Nandi shrines outside each facing the respective Shivlinga inside. Numerous smaller friezes narrate Hindu texts such as the Ramayana, the Mahabharata and the Bhagavata Purana.

The temple is built with soapstone, which is soft when quarried and easy to carve the intrinsic patterns and hardens when exposed to air. The temple outer walls is intricately carved. Its lowest layers consist of bands with friezes that consist of (from bottom to top) elephants, lions, horses,scrolls with nature and miniature dancers. The episodes of Ramayana, Mahabharat and Bhagvat Gita are depicted, we could see Abhimanyu’s Chakravyu, Swamvar of Draupati, Durga killing the Buffalo Demon, Prahlada-Hiranyakasipu-Narasimha legend scenes on the wall.

The doors have dvarapals wearing jewellery, above there is Nataraja along with other dancers and musician. The pillars and ceilings have Madanakai sculptures in pillar bracket, same on the outer walls too. The roof of inner sanctum is decorated intricately with Hindu deities. There is a imaginary animal with Peacock feather, crocodile head, elephant trunk, body of lion carved around the temple. This temple signifies one of the finest work by Indian artist.

This is another 17km from Halebidu Temple, it took 103 years to finish this temple located on the banks of Yagachi river. Over its history it has been damaged and repaired multiple times. Chennakeshava is avatar of Lord Vishnu. The artisans developed a new architectural tradition called as Karnata Dravida tradition.

The empire was invaded, plundered and destroyed by Muslim army led by Malik Kafur and was later taken over by the Vijayanagara Empire and restored. The platform is built around the temple for pradakshina in star shape of the shrine. This one is simple as compare to Halebidu. Each pillar inside the sanctum are carved with different patterns, one of the pillar demonstrating all avatars of Vishnu. The light screen are engraved with Purana scenes and geometric floral designs. Above the perforated screens are Madanakai figures.

Secular life is shown in these images, such as an artist making a drawing or musicians lost in their music. Also included is the image of a Jina of Jainism. The domed ceiling at the center of hall is carved with figures of Brahma, Vishnu and Shiva, at the bottom of the dome is a series of friezes with the Ramayana story. 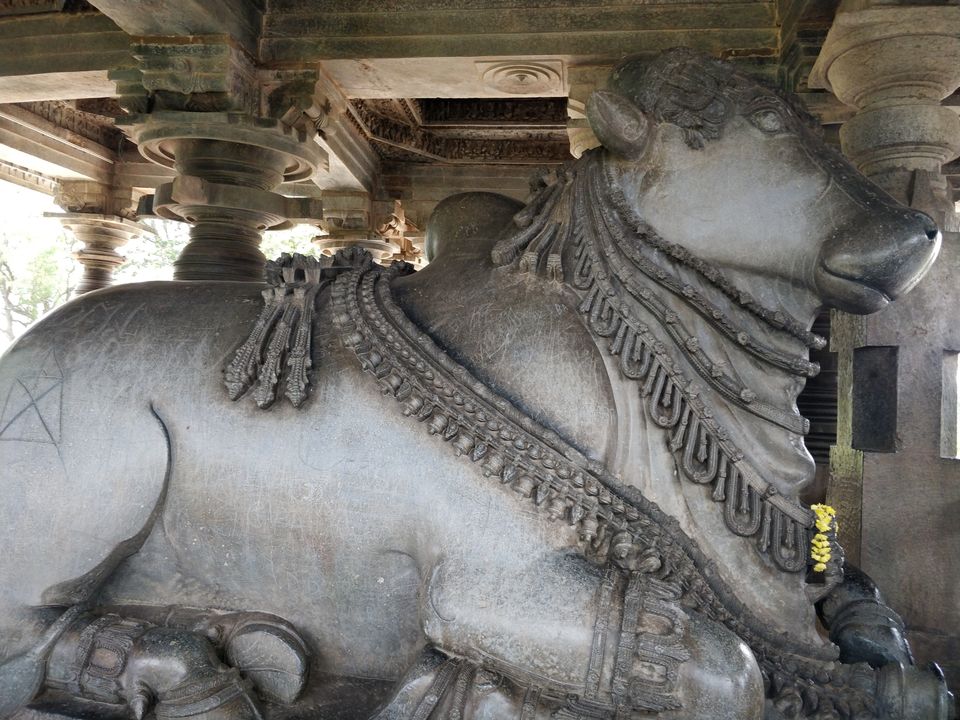 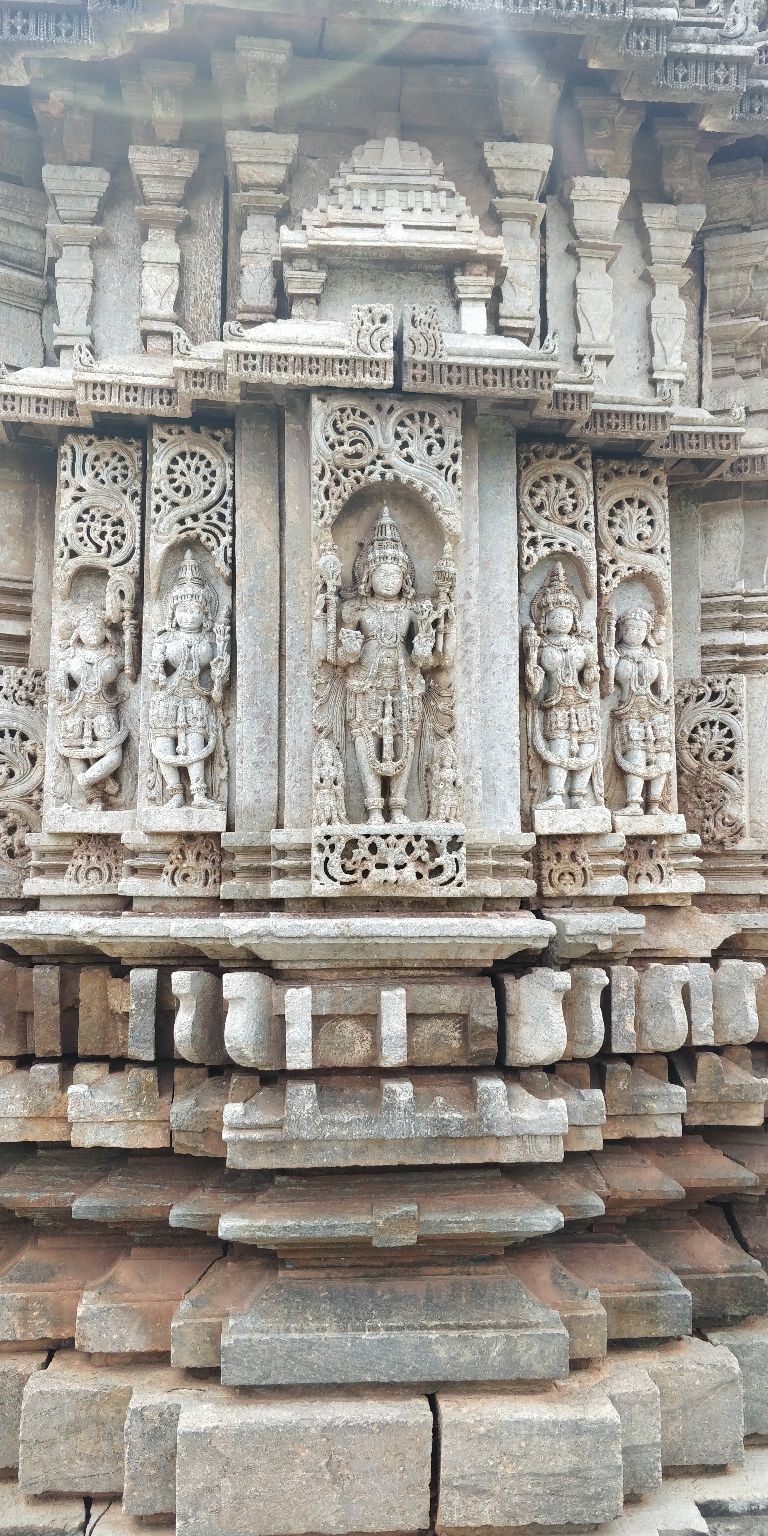 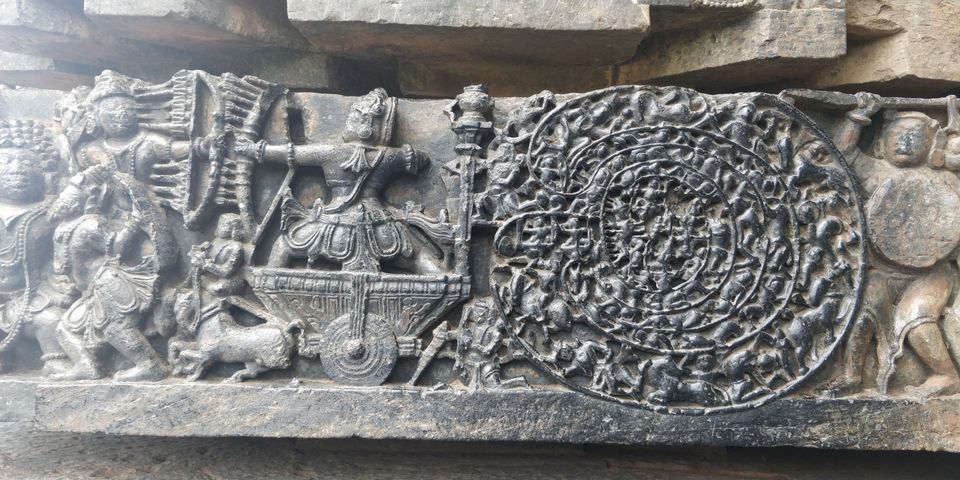 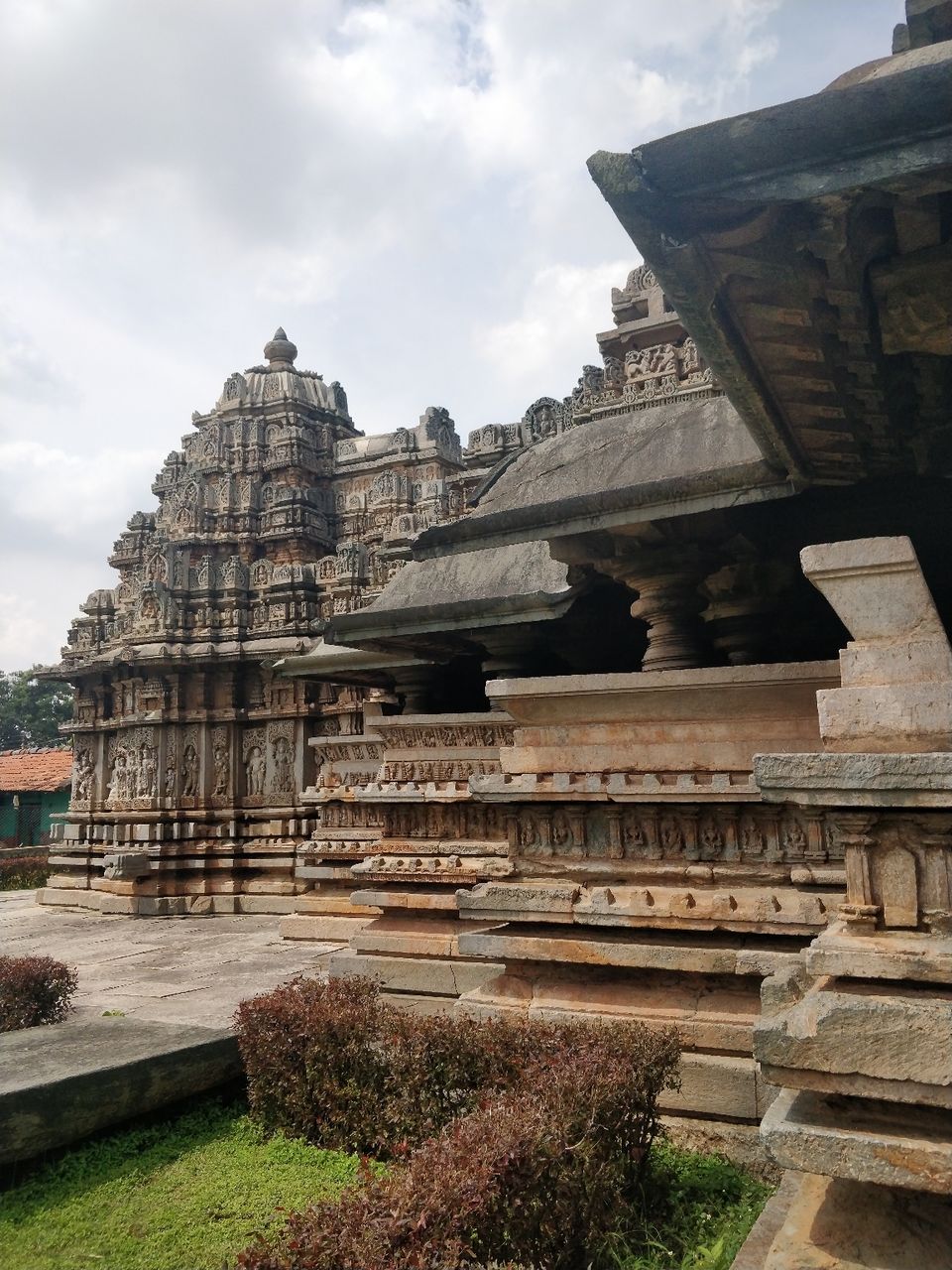 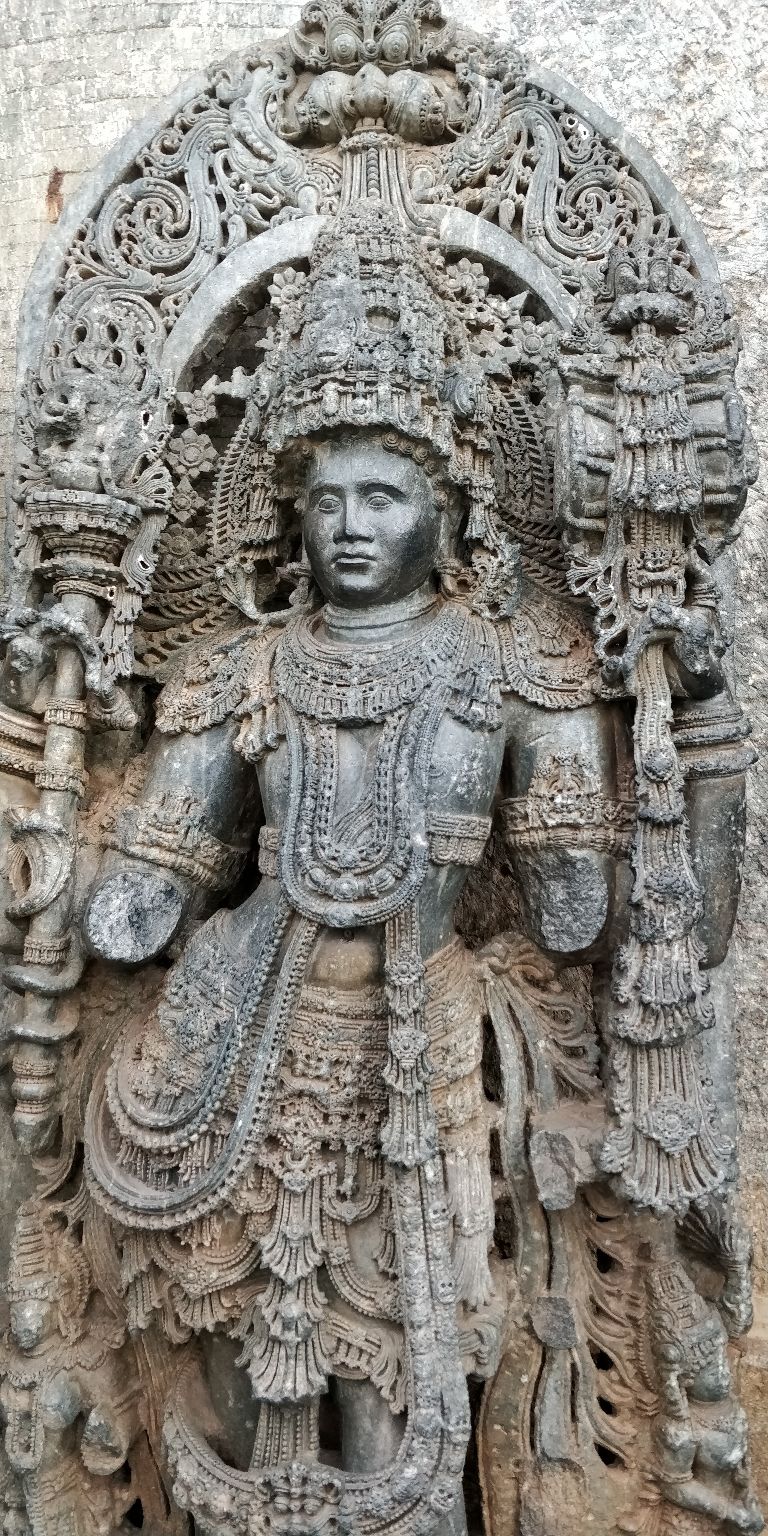 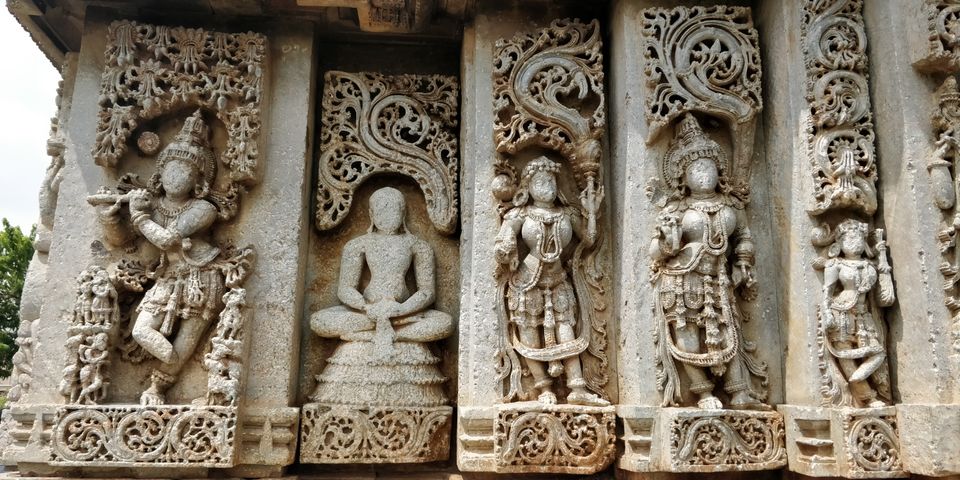 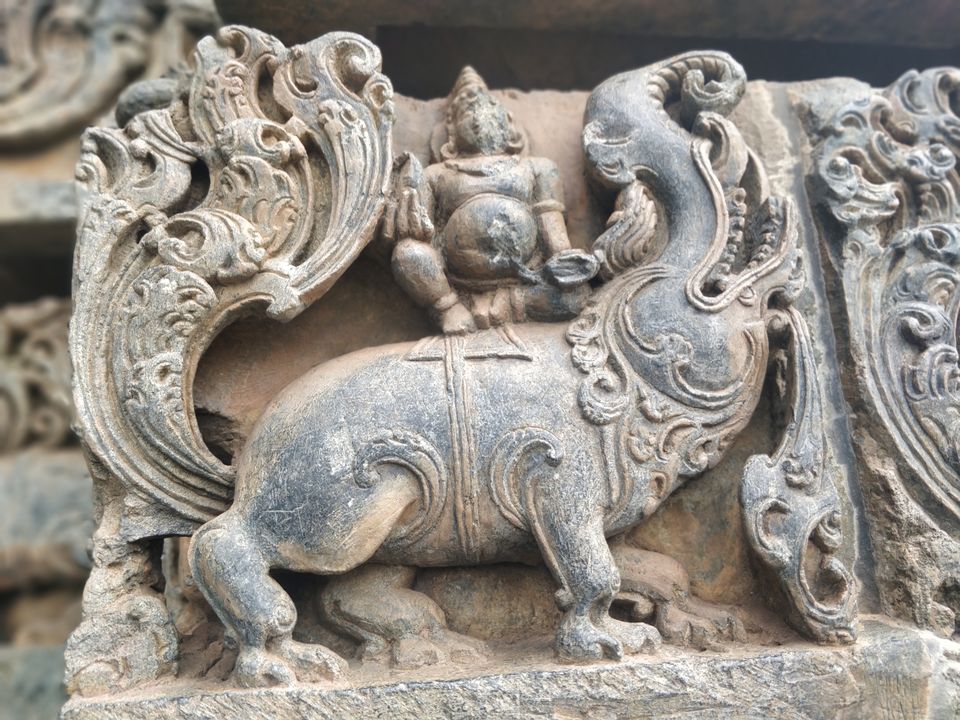 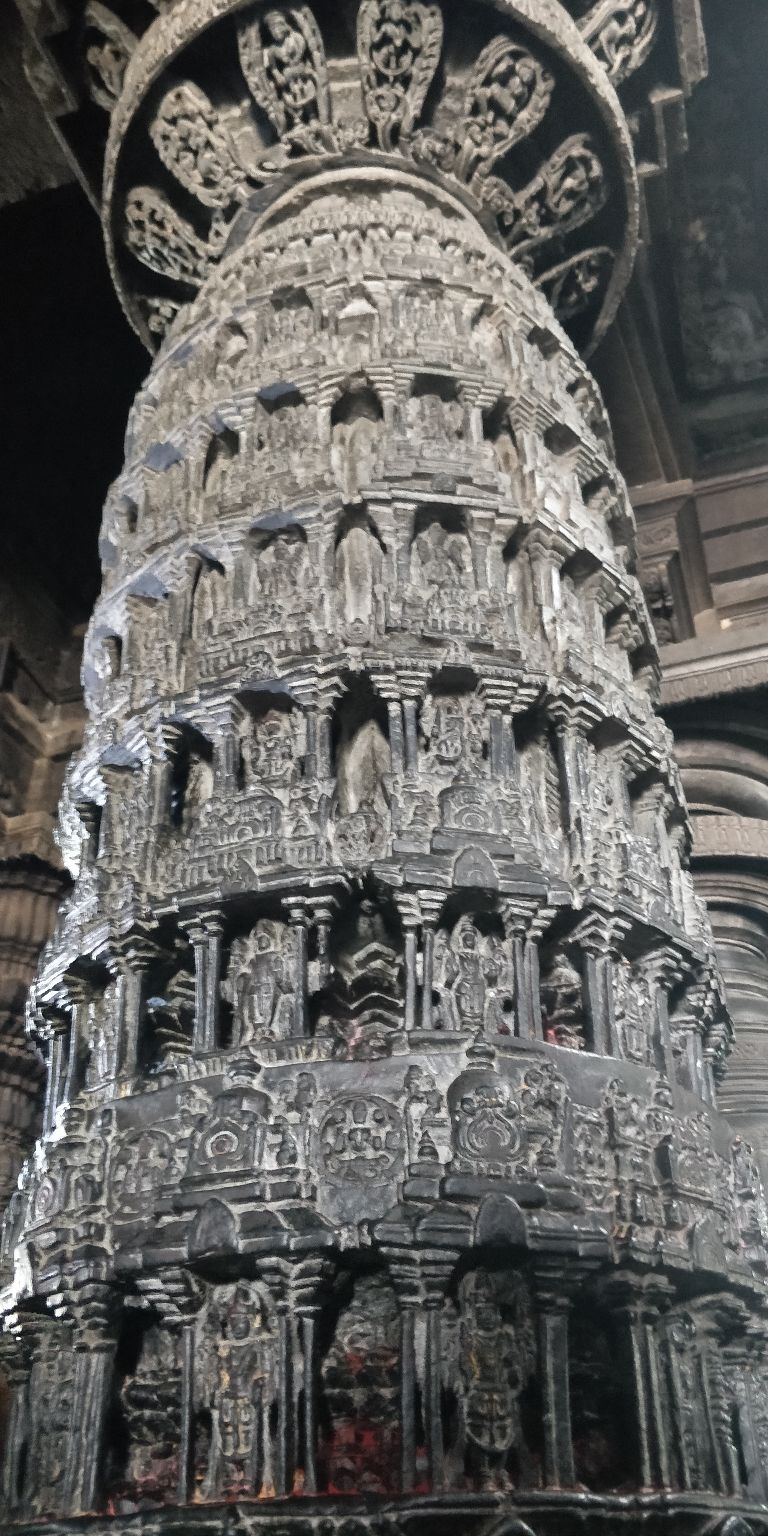 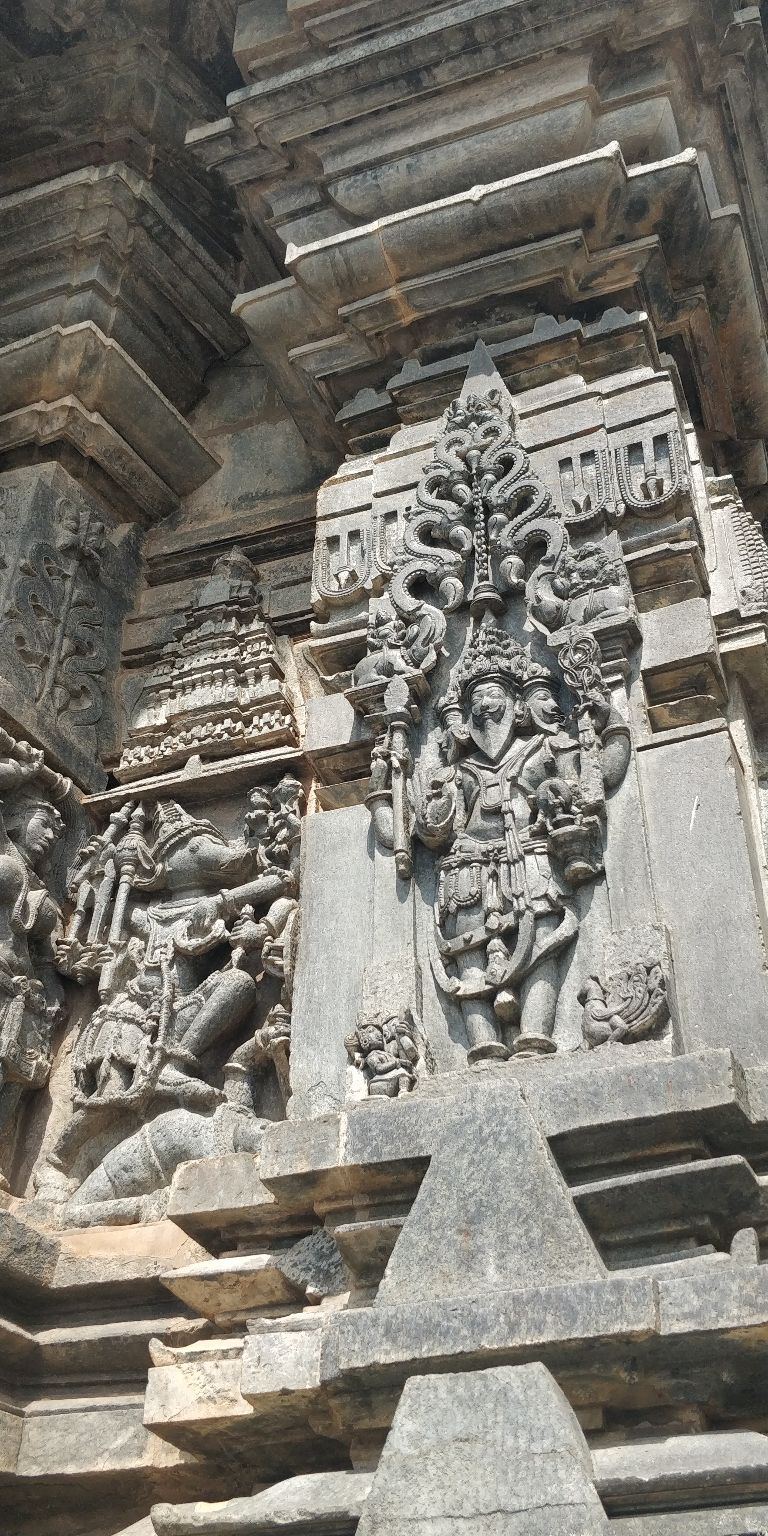 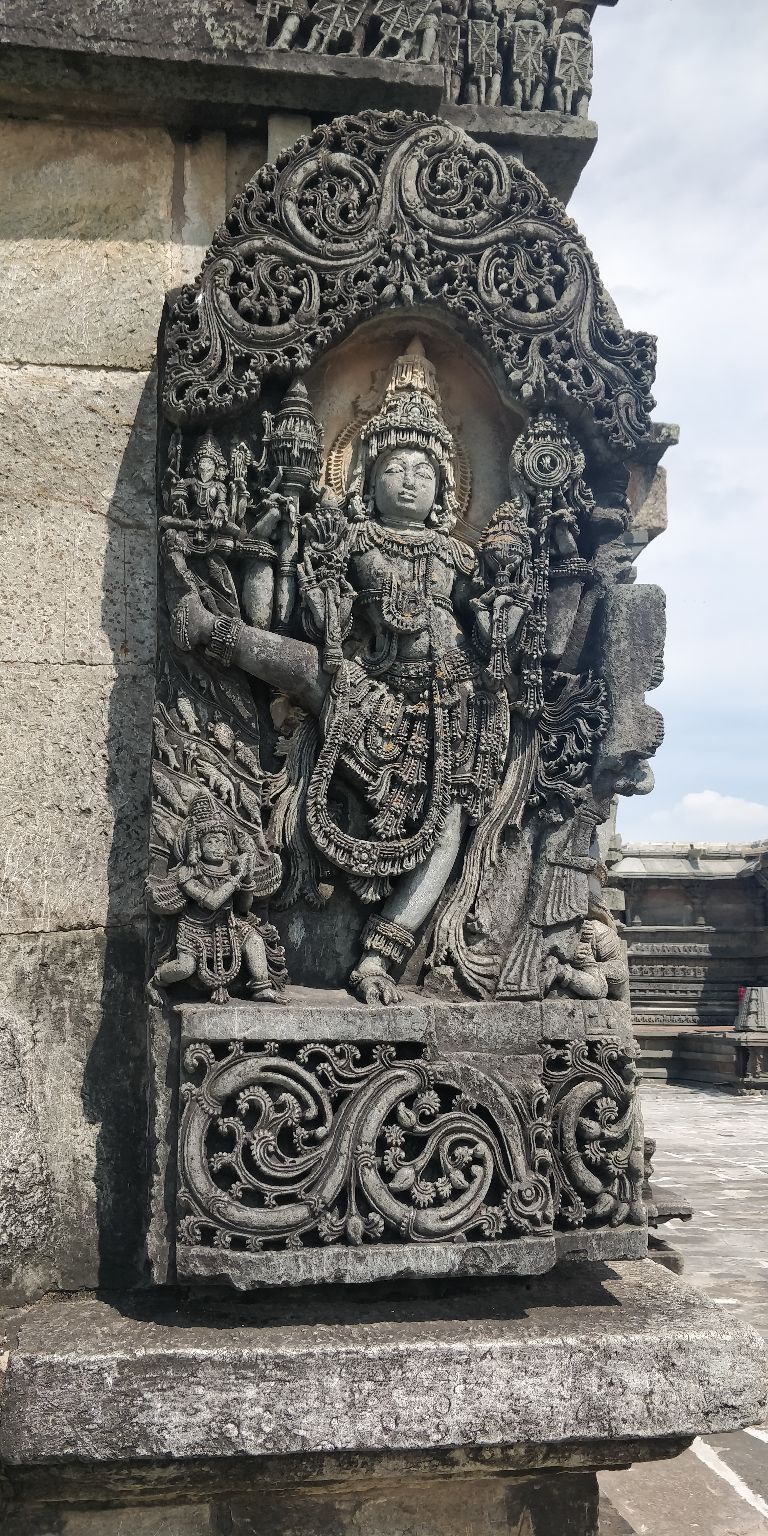 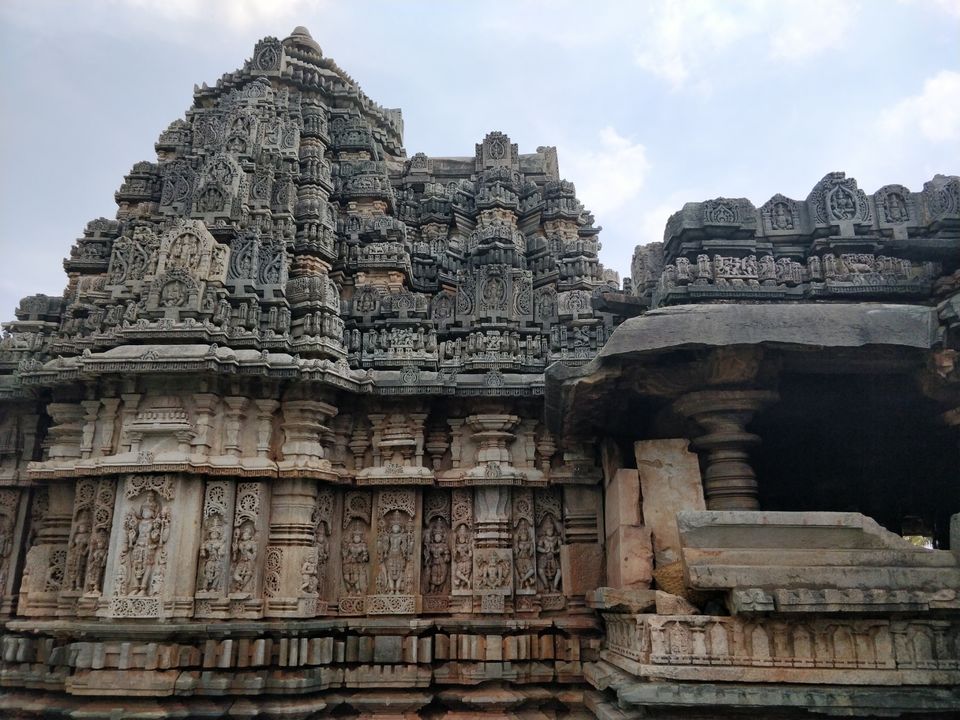 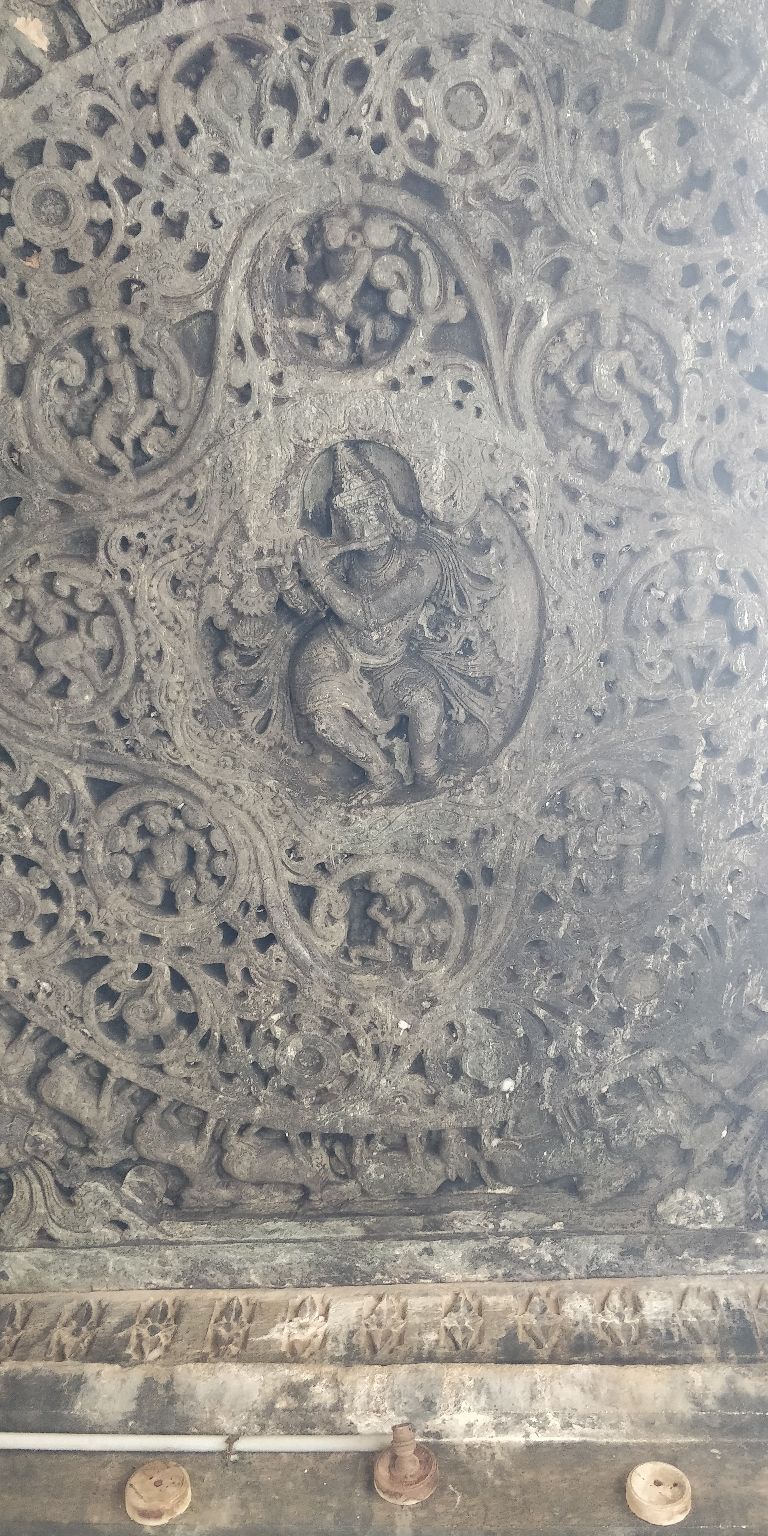 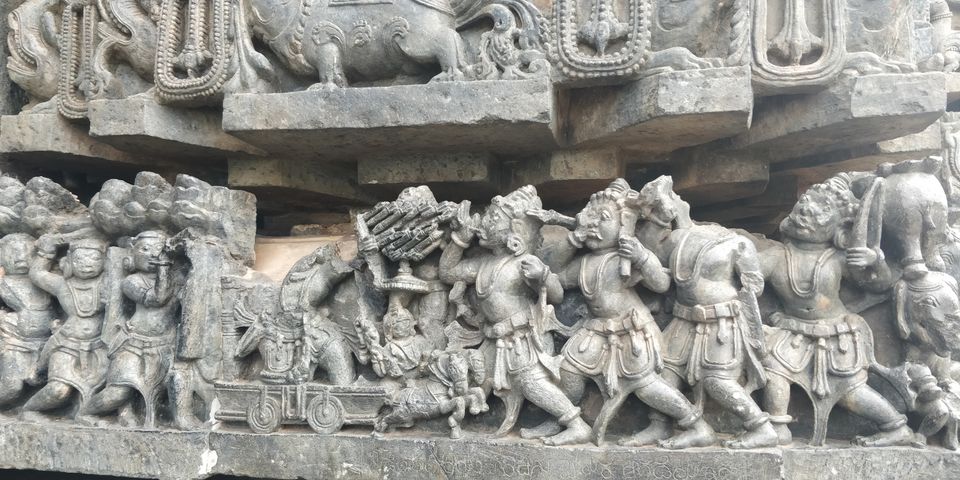 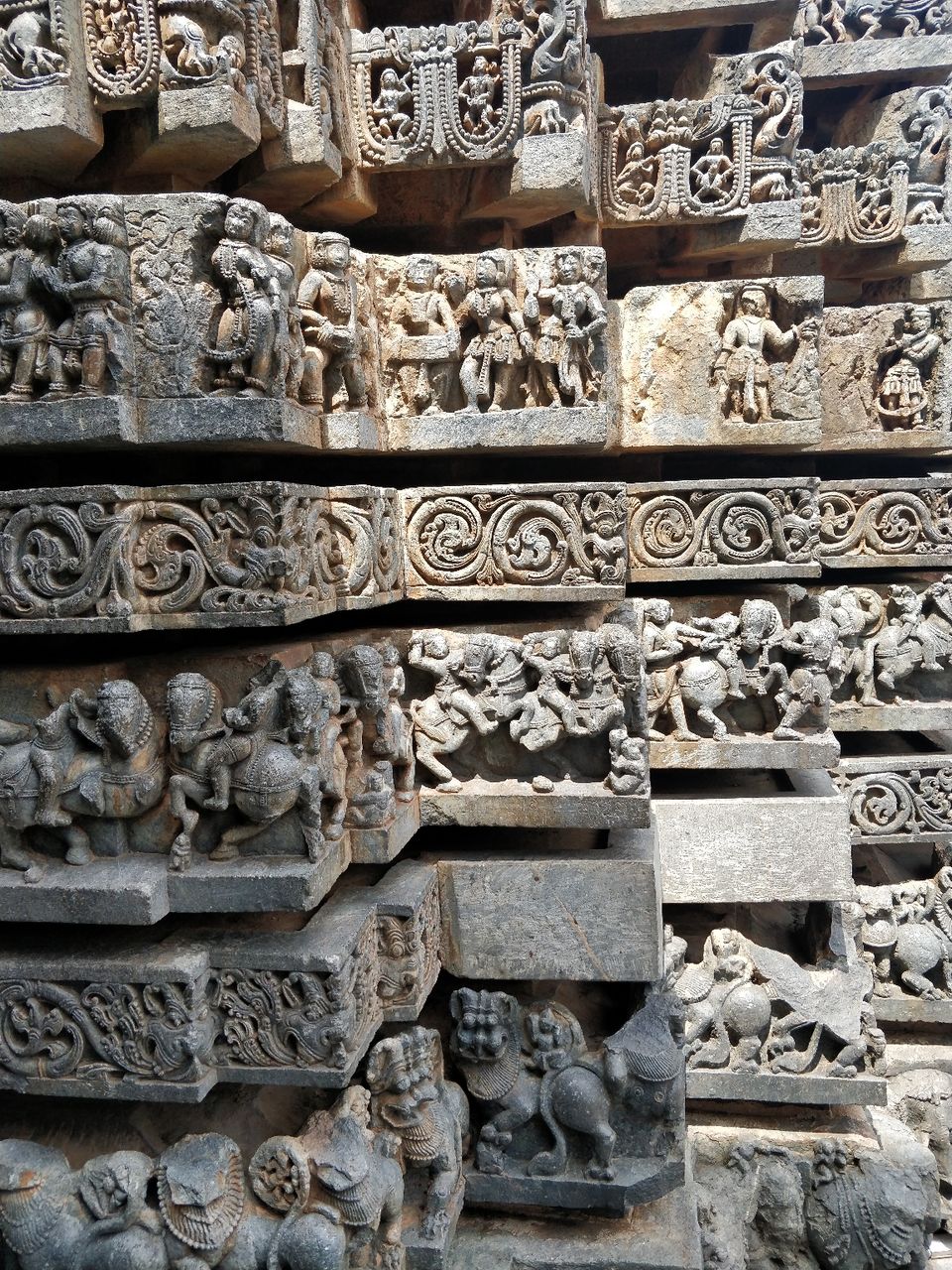 On the trip to Chikmaglur, after getting engrossed in nature we next hop on to see the Architecture marvels. A little is heard about these temples build by Hoysala Dynasty, they are rewards for the history lovers.

It is connected to Bangalore by road and Mangalore is the nearest airport, passenger train runs daily from Bangalore but could be little difficult to board on. Buses ply frequently between the two cities.