Hampi - The Lost City with an Iconic Heritage

It was 1 PM in the afternoon. After lapping up all there was to see in Pattadakal and Aihole, we proceeded towards Hampi, which is at distance of around 150 km from Aihole. The stretch of road between Aihole and Hampi being smooth, we had an easy drive. On the way, as we passed through Kamalapur, we saw a lake in which the water had a pinkish tinge, appearing as if it had borrowed its shade from the nearby reddish hills.

Reaching Hampi by 3.30 pm, we checked into KSTDC. As it was very late, we ordered for a simple Daal Khichdi. While having food in the food court, I heard some loud thud sounds from the roof. I wondered if some tree branches had fallen on the roof, only to realize that it was the sound of monkeys jumping on the roof. The waiter told us not to worry as they would not come down. Quickly finishing up our lunch, we left for seeing Hampi.

A UNESCO heritage site, Hampi was the capital of the Vijayanagar empire from the 14th to 16 th century.

'A city as large as Rome and very beautiful to the sight'.

This is how the ancient foreign tourists described the city of Vijayanagara, as it was then known. 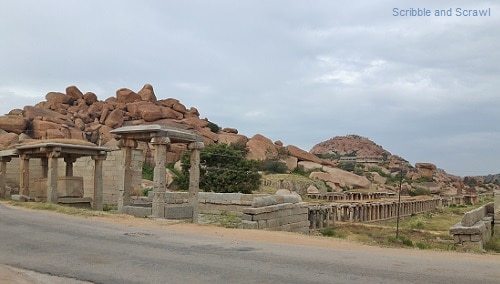 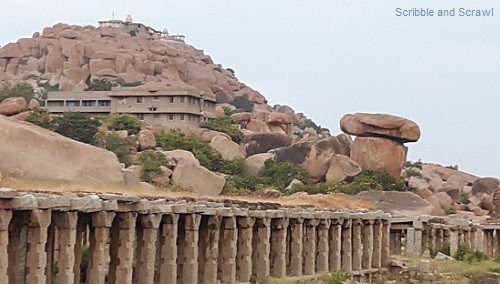 Many forts, ramparts, temples and statues can be seen all throughout the city, aesthetically blending with the rocks and boulders. 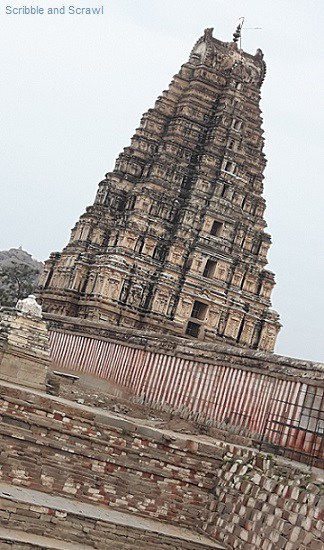 We started our tour of Hampi with the Virupaksha Temple, the oldest of all temples in Hampi. Also called Pampapathi, the temple is dedicated to Shiva.

The 165 ft tall entrance of the tower is visible from a distance. As we parked and walked towards the temple, a vendor girl told us that there is an elephant inside the temple and sold us a bunch of bananas for the elephant. But she didn't tell us about the monkeys inside the temple, who quickly snatched some of the bananas just as we entered the temple complex.

By the way, Hampi also finds mention in the epic Ramayana as Kishkinda, the kingdom of monkeys, ruled by Vaali and later by Sugreeva.

Coming back to the temple elephant, the interesting thing I noted about the elephant was that when someone offered money, the elephant would deftly pick up the money with its trunk, give it to his handler and bless the person. 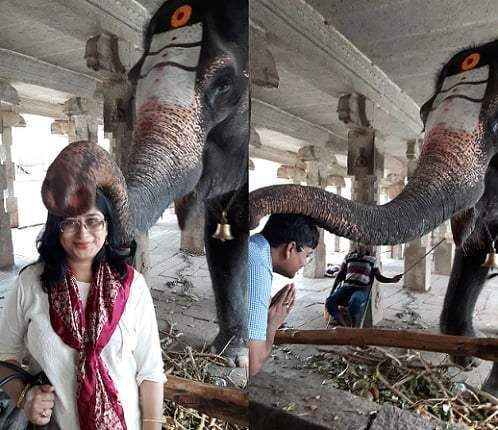 Here I am getting blessed. :-)

After some time, the elephant was taken away for a dip in the water of Tungabhadra river that flows by the temple.

The light at the tip of the temple peak now glowed in the twilight. We stood for darshan as the priests performed the Puja, and took the prasadam.

On the next day, we went to the famous Vittala ( Vishnu) temple, the exquisite architectural showpiece of Hampi.

The car park is at quite some distance from the temple. An electric cart took us to the temple. From the cart, we could see pillars on both sides of the temple, which used to be the open shops on the way to the temple. It is said that diamonds, crystals and other precious stones were sold openly in these shops. Religion and commerce have co-existed since ages.

Inside the large complex are many-pillared halls, temples and a chariot. It must have been an extraordinarily beautiful sight in its prime. 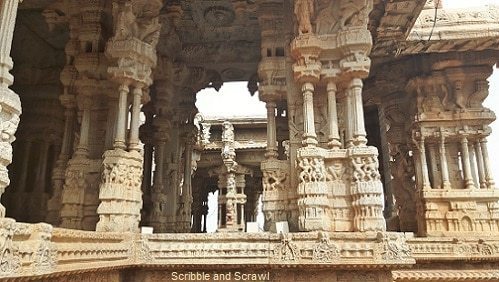 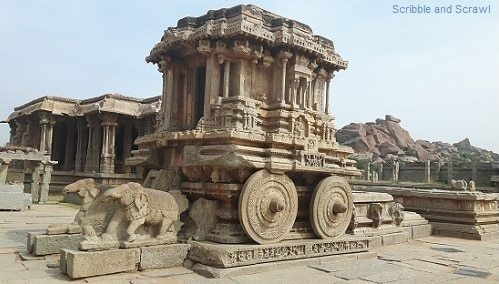 The main attraction of this temple is the monolithic pillars, with the most intricate carvings. The outermost pillars in one of the elevated open halls called the Maha-Mantapa are popularly musical pillars. These emit musical tones when tapped.

The famous stone chariot stands right in the centre of the complex. The Vijayanagar Kings seem to have built the chariot after being inspired by the Sun Temple at Konark in Odisha. 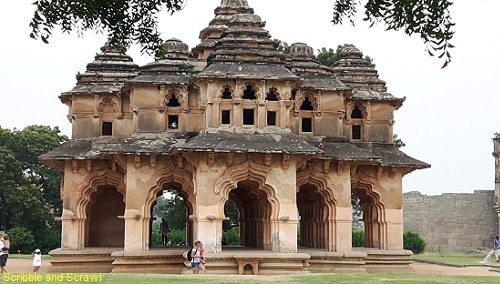 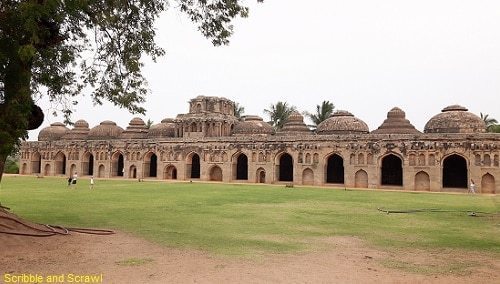 A place worth mentioning is the eight-angled Lotus Mahal built in the Indo- Muslim style. This used to be the place where the King would relax and have conversations. A garden around the structure enhances its beauty.

Adjacent to the garden of the Lotus Mahal, separated by a high stone wall is the royal stable which sheltered the royal elephants of the king of Vijayanagar.

Hidden away from the main road is a huge idol of Narasimha. This idol is not inside a temple but in an open place. The 22 ft tall idol is carved of a single stone. Unfortunately, many parts of the idol are damaged.

Other than these place, we went to the Museum, Queen's bath, a podium known as Mahanavami Dibba, which once had a hall with fragrant sandalwood pillars standing on it, a pond called Pushkarani and Sasivekala Ganesha, and Sri Krishna Temple.

Next day we started off for Manipal, with my mind and heart filled to the brim with the richness of the cultural past of the places.

The Karnataka government sponsors a 3- day celebration called 'Hampi Utsav' every year between November and January. They have also proposed a tie-up with Peru for promoting Hampi and Machu Pichu as twin heritage sites.