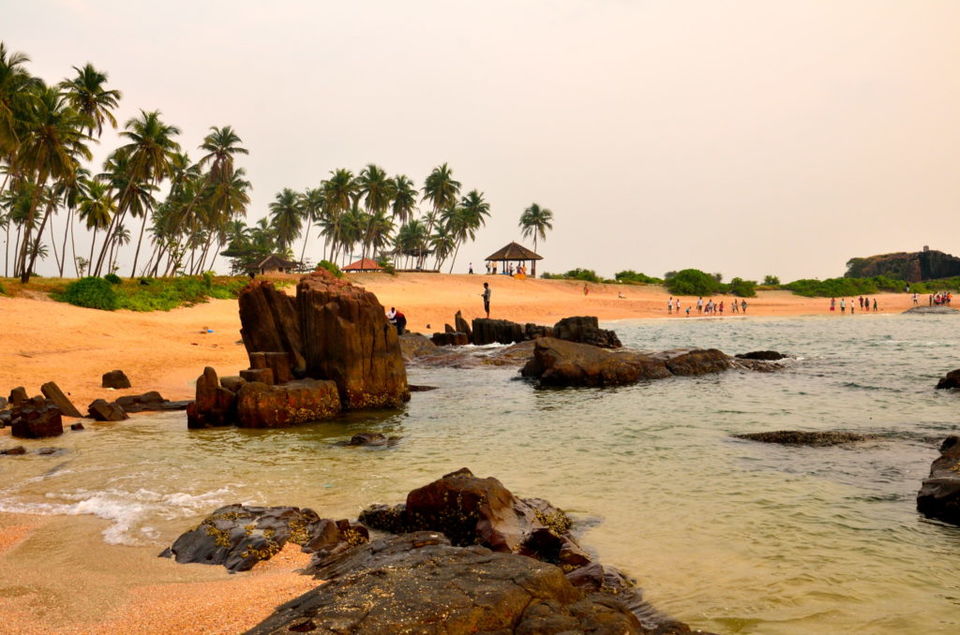 Winters are pleasant throughout the west coast of India. It's neither too hot nor too cold. Perfect time for everyone to indulge in an adventure called travel. Let's go for a boat ride, my friend declared during one such winter weekend a few years back. I was still new to the city of Mangalore then. Well, before I could think and ask more about it I found myself cruising on Mangalore -Goa NH-17 towards Malpe with friends. In about one hour we reached Malpe Jetty from where ferries go to St. Mary's Island. Soon after, the ferry with around 30 more persons besides me left the jetty with all familiar whistles. The light Bollywood number was adding to the overall mood of this journey. This 30 minutes one-way ferry ride to the St. Mary's Island is as much fun as visiting the island. As we looked towards the horizon islands' shape became more obvious with passing time. Our original plan was to enjoy this ferry ride, visiting the island was secondary. Well, I underestimated the beauty of it and by the time we finished our little sojourn of this small wonderland called St. Mary's Island I knew one thing for sure that more visits would definitely follow!

As our boat stopped I jumped at the knee-deep seawater just before the island's beach. The floater boat could manage come up only up to that point due to shallow water. Past visitors to the island were wise enough to carry extra trousers. Experience always counts! There was however no such luck for us. The only thing I could remove was my sandals. The half wet jeans I was wearing became heavy once the dry sands on the beach stuck to it. With my camera bag on one hand and sandals on the other my eyes directed towards a half broken, a rickety wooden plank with 'Welcome to St. Mary's Island' written on it. What a welcome! Well, the neo- explorers finally landed at the shore!

Surrounded by the sea from three sides India has its own share of islands dotting the coastline. Some of these are populated while others have no habitation. St.Mary's Island, off Malpe, is one such place. The island is a group of four smaller islands or rock formations made up of Columnar Basaltic Lava millions of years ago. Saying goes that the famous Portuguese explorer Vasco da Gama stopped at this island on his way to Kozhikode in Kerala during the 15 th century. Here he placed a cross and named the island as O Padrão de Santa Maria, as a dedication to Mother Marry but there is no solid proof available. Nevertheless, the St. Mary's Island has been declared as one of the 32 National Geological Monuments of India by Geological Survey of India. This small island is also known as Coconut Island or Thonsepar by the locals because of rows of coconut trees dotting the island. Although no one is allowed to live there during night time but some temporary structures like toilets, sitting places have been built up in recent times to cater visitors by the government. The island remains out of bound during the monsoon months.

As I entered the island I could see the end of this small 500 m by 100 m island, it looked tiny. I did not expect it to be this small. But soon it was apparent that what it lacked in size was more than made up by its beauty. It would be a mistake if one goes by the size of this island. As we started exploring the island I found the quality of sand near the other side of the shore totally different. Unlike the sticky sands near the entrance here the sand is thicker and mixed by the broken shells making it non-sticky and unique. The colour of water is also bluer in this part of the island. Add to this the beautiful rock formations and a generous spread of coconut trees dotting the island. With such a beauty in front of me, my hands automatically found my camera and started capturing the moments.

Though it was getting late and ferry operators were calling visitors to return there was still some time left for the last ferry to leave the island for the day. Watching the sun going down behind the rock while sitting there overlooking the still waters of small water pool formed by the sea water during the high tide was one of the best things happened that day. Though during the visit I could spend only a couple of hours that was just the beginning, consecutive visits led to a more fulfilling experience.

Precaution: The environments of islands are more fragile than regular city or village because of the limited area or land mass available. Islands require more care. St. Mary's Island is no different. Please desist littering, don't dump anything there, leave nothing except your footprints. Please keep it clean.

How to reach: Nearest Airport is at Mangalore 62 Km. Malpe is well connected from Udupi (6 Km), Mangalore (60 Km). Nearest rail station is at Udupi and Mangalore. Regular bus service is available from these places.

Stay: There are several hotels suiting all kinds of budget in Udupi town. Being a temple city Udupi receives heavy rush during Hindu festivities.

Time to visit: St. Mary's Island can be visited all the time except during the monsoon period (Generally from late May to Mid August).