Hampi was in my destinations list since last 6 months when I first read about and saw stunning photos of it. The plan was finalised when one of my friends called me and asked if we could plan a trip for 2 days somewhere in between Pune and Bangalore. And the obvious place which came to my mind was Hampi. Without deliberating much on it, four of us (2 from Pune and 2 from Bangalore) decided to reach the major city Hospete which is approximately 10 Kms from the Hampi.

We both started our journey from Pune and the other two started from Bangalore. We two touched early around 9:30 AM while both of them were still 30 kms away from Hospete. There is nothing obvious other than to take some sort of transportation from our alighted place to the resort (Which is exactly half a way from Hospete and Hampi) where we had a booking and where we all decided to meet before we begin our exploration. You could get the public transport buses from Hospete to Hampi every half an hour but as we were not sure about this that time thus went ahead with auto ride. We reached the resort around 10 AM and the convivial reception asked us to wait as the check-in time was 12:00 Noon. We requested auto to come to the hotel after 2 hrs when we all 4 can be together and need further auto ride from resort to Hampi.

What it could be considered as a surprise, resort reception allotted us the room at around 10:30 AM. Guys from Bangalore alighted to resort around 11:15 AM. After some refreshment we went to the main market place where we took 21 (3 x7) gear bicycles on rent. Finally with lot of enthusiasm and excitement we started our journey to experience the history.

Hampi embraces mainly the remnants of the capital city of Vijayanagara Empire (1400-1600 AD), the last great Hindu Kingdom. The vast area of this city can be measured anywhere in between 40 to 42 Km^2. The city was built on the holy Tungbhadra river basin in central Karnataka. However, emperor Ashoka's Rock Edicts in Nittur & Udegolan (both in Bellary district near to Hampi) suggest that this region was part of the Maurya Empire during the 3rd century BC. A Brahmi inscription and a terracotta seal dating to the 2nd century CE were also recovered from the excavation site.

The spectacular Hampi is surrounded by craggy hills and silently flowing Tungbhadra. The antiquated remnants comprise royal and sacred enclosures, riverside features, temples, shrines, pillared halls, defence check posts, watching towers, water structures, etc. The water structures include queen’s Bath, public swimming pool and an antique water pipeline system. One shouldn’t be surprised knowing the fact that Hampi was one of the richest and largest city in its prime time. The empire bolstered a massive army of around two million men. In around 1500 AD Vijaynagar (Hampi) had about 500,000 inhabitants (supporting 0.1% of the global population during 1440-1540 AD), making it the second largest city in the world after Beijing and almost thrice the size of Paris.

Hampi has lot to offer for an aficionado of an ancient history and architecture as the magnificent setting of it has some of the greatest Dravidian structures. Among these,Hemkuta Temple Hill, Sri Virupaksha Temple complex, Vitthala temple complex, Krishna temple complex, Pattabhirama temple complex, Lotus Mahal complex, Sri Achuturaya temple complex, Hazara Rama Temple complex etc. should be focused on. These large temple complexes were surrounded by the suburban townships which encompass bazaars, residential areas and water channels. Another unique features of temples in Hampi is the wide chariot streets flanked by pillared halls, introduced when chariot festivals became an integral part of the rituals. 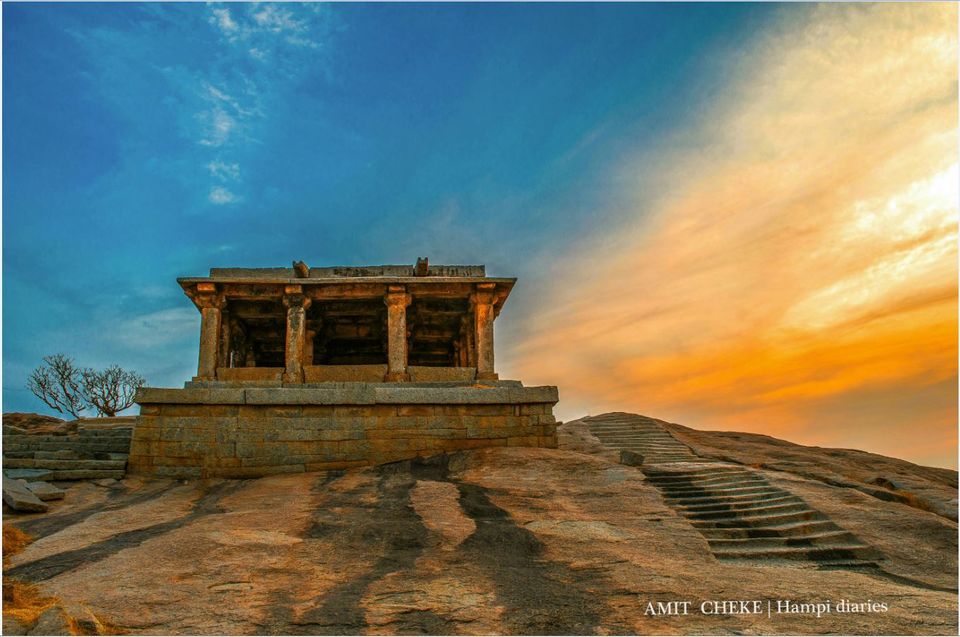 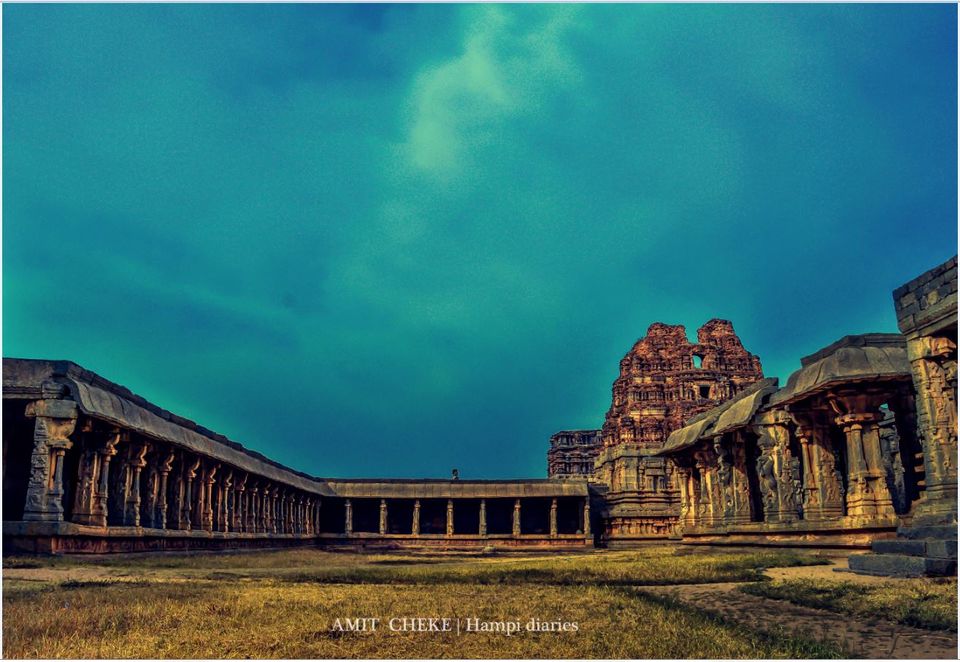 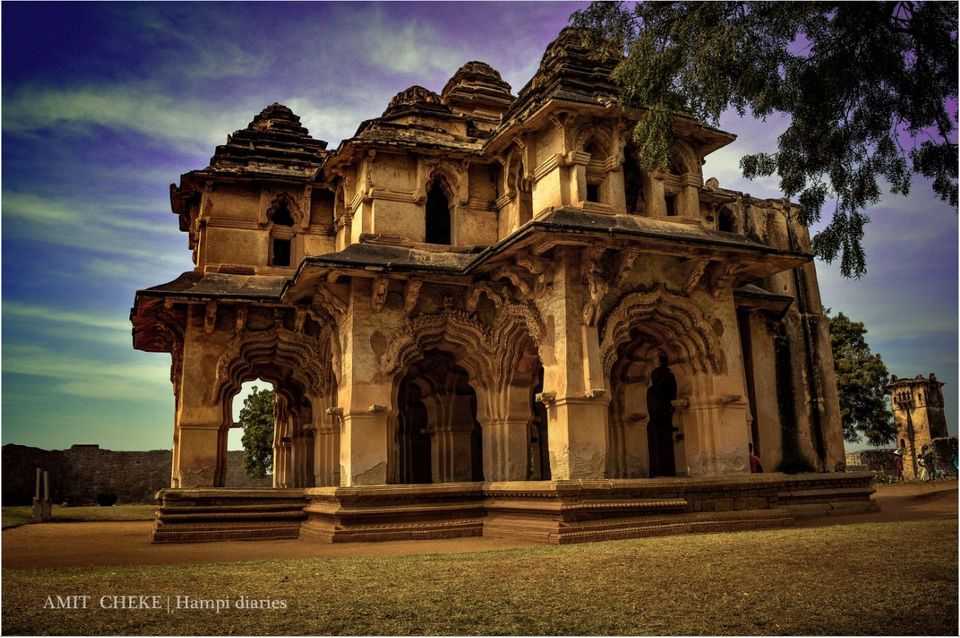 The city also has other very large architectural beauties which includes elephant stables for keeping the reserves of military and civil elephants, secret chambers which were used for conducting some top secret security meetings among the top officials. 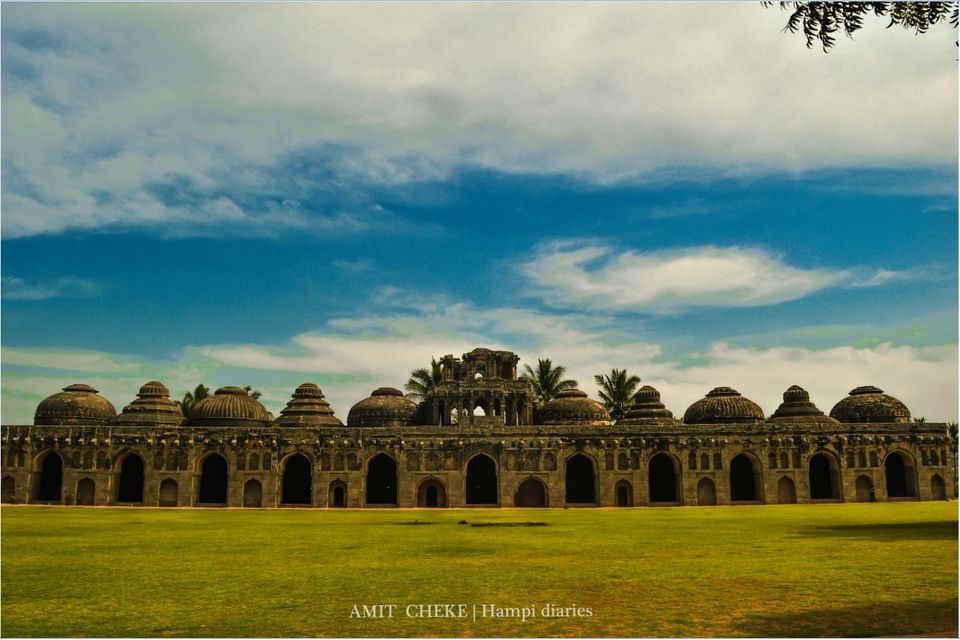 The stages of evolution and perfection of the Vijayanagara Architecture are evident in the monumental structures as for traditions and techniques; the physical remains are a befitting tribute to the ingenuity of the builders in shaping the metropolis of this grand scale by utilizing locally available material, traditional knowledge system and skilled craftsmanship. I was quite stunned after looking at such absolutely enthralling carvings and in-detailed work on the stone pillars and temple pinnacles. 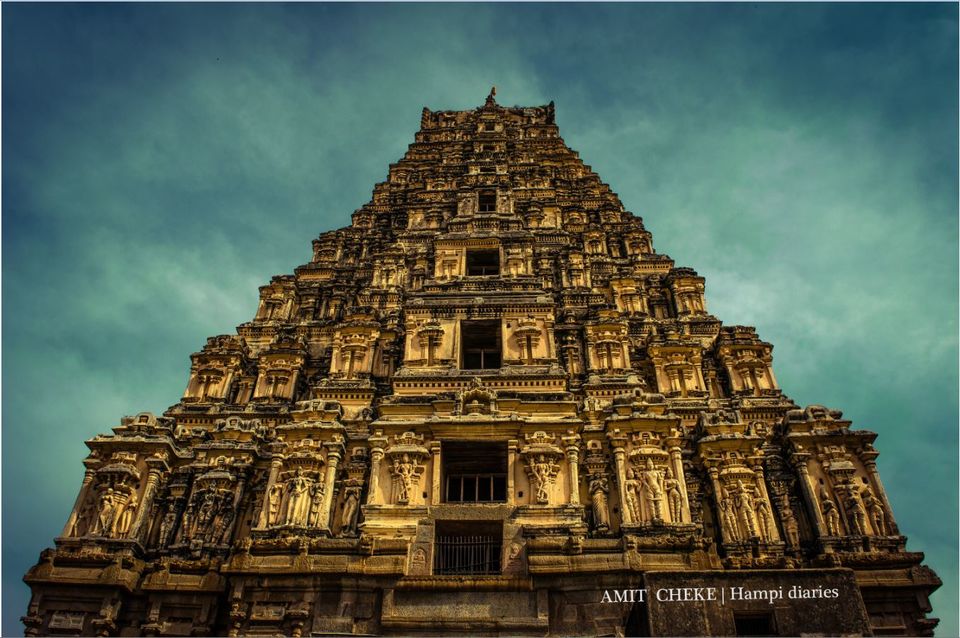 We tried to visit most within the ocean of an antiquity but because of the time arrow we couldn’t make it to all of it. Two days won’t be enough to see, observe and to capture mind blowing landscapes of everything present there. However, while leaving we decided to plunge back here with some extra reserved revolutions of earth around herself. We started our journey back with whatever we saw between our strong mind and fragile heart and with beatific smile deciding to visit it again to explore what may be lingered to perceive in our tiny eyes.

It is the place for those who would like to get lost in the pre-medieval times away from an urban and modern life, who would be able to discover, clutch and emphasize an extra ordinary work done by our ancestors. One should definitely visit here to understand what we were 5 to 6 centuries ago and what we are right now.