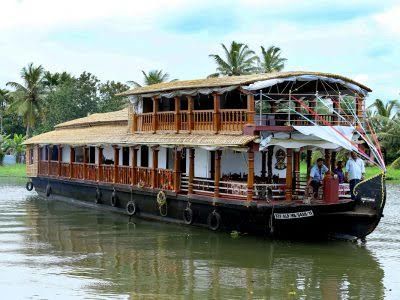 Kerala, a state on the Malabar coast in southern India is probably one of the most popular Indian tourist destinations. It has been popular among tourists - couples, families & backpackers alike for the longest time - perhaps because geographically it is the complete travel package - It has everything from serene beaches to scenic hills, from tea & spice plantations to dense forests & calm backwaters. Apart from scenic beauty, it is popular for Ayurvedic treatments, classical dances - Kathakali & Mohiniattam, Kalaripayattu & of course, it’s delicious cuisine.

We’ve had Kerala on our bucket list for the longest time, Not wanting to miss out on anything, we planned a tight 5 days trip covering Kochi, Munnar, Thekkady, Allepy & Poovar, planning to stay in each place for a day

We ended up booking hotels & flights from tripoto as it was our company.

I will be sharing my experiences from two major tourist attractions - Kochi and Munnar.

Kochi, the largest city in Kerala, has historically been an important port city right from the 14th century - colonised by the Portuguese, Dutch & British at different times in history, the city still preserves an intriguing mix of architecture from its varying colonial past. Ernakulam is the city’s cosmopolitan part where as Fort Kochi is the tourist hub.

We chose to stay in fort Kochi area which is almost 45 Kms from the airport.

The delightful waterfront hotel on a man-made island offers a spectacular view of cochin harbour. The hotel is a 45 km drive from Cochin International Airport. The nearest railway station,Ernakulam is at a distance of 10 km (20-min drive) .The hotels is 8 km away from Dutch pa . The hotel name was Vivanta by taj-malabar . 5-star hotel .

The fort Kochi area has it own quaint charm, It is buzzing with tourists, but each at their own pace - this part of the city has a ‘homestay’ in every corner! We chose to discover this area on foot since all the places we wanted to see were close to each other.

Mattancherry is known for spice markets, we visited a local spice store called ‘All spices market’ & were in awe of the variety of spices,oils,teas & coffees & felt like a kid in a candy store!Some of the street stores also sell spices, herbs, soaps & oils.The Mattancherry (Dutch) palace museum is definitely worth a visit. The Murals in the bedchamber part of the palace depict scenes from the Ramayana. It is said to cover an episode from the epic in 48 paintings. Another part of the museum documents the portraits & lifestyles of the rajas of Cochin. One can also find a few items of furniture gifted to the rajas from the Portuguese. The museum captures a small part of Kochi’s Traditional, Portuguese & Dutch history.we had our shoot over there for a day. It was an amazing experience to shoot over there.

At night we ventured out to princess street - it is a great place to shop & eat! It rained that evening & being unprepared, we were drenched One can see pretty houses with flowers on their windowsills & more street art across this area. We ate at Kashi cafe (& art gallery - another recommendation if you are an art buff like us!) Every cafe we visited in the city had great cold coffee & homemade cake. We want back to hotel .As there was some function going on ,so we attended it .Local folk dance of Kerala was amazing .we were experiencing it live .

On next day we visited Munnar

Munnar is a Hill-station on the foothills of the western ghats, One of the most sought after tourist spots of Kerala owing to its scenic beauty - lush carpeted plantations of tea & spices around its hills. It is also the largest tea growing region of the south.

We took only AC KSRTC volvo bus from Kochi to Munnar, Starting from Ernakulam bus depot at 9AM. The journey was scenic but nearly 5 hours long! and all through the way, our bus driver played 90s Bollywood music! So our playlist comprised of - songs from Raja Hindustani, Ashiquie, Darr & other nineties hits! quite a nostalgic journey if you ask me!????????

One of the things We enjoyed most in Munnar, was stopping on the way & walking through tea gardens, there are many many scenic places to discover by chance & If you are lucky, you’ll get to see tea pickers in action!

The Mattupetty dam was extremely scenic! beautiful, calm & serene. Though it was quite sunny around 4pm, (the Kerala sun is quite harsh, during the day & it gets hot by 9 am! don’t leave your hotel without a hat & sunglasses & carry appropriate sunscreen). Boating at Mattupetty dam is one of the main attractions here.This whole stretch is scenic, one can walk around, boat or even shop for home made chocolates in the stretch of stalls by the lake.

A completely commercialised tourist spot now - it has all the street food one would expect corn, coconut water,peanuts, snack stalls & even Passion fruit vendors! One can club visiting Mattupetty dam with Top station as both these are only a few kilometres apart. On the way back, our cab driver stopped by many places, claiming that these were ‘Shooting points’ or points where some Bollywood film shooting has taken place. although truth be told all of it was equally scenic!

Exploring backwaters in a houseboat is one of the must do things in Kerala and the best way to experience Kerala’s beauty through the palm-fringed backwaters – a chain of lakes, canals and lagoons.

A network or channel of lakes, cannals, inlets and rivers have been given the name of Kerala Backwater, which form over 900 km of waterways. At different places on the state’s landscapes, there are cities and towns, which act as starting and ending points of houseboat cruises. These backwaters have been blessed with a unique ecosystem, where the waters of the Arabian Sea meet the freshwater of the rivers. At some places, for instance, Vembanad Kayal (Kumarakom), a bank has been made so that the freshwater of the lake doesn’t gets mixed with salt water of the sea. This water is used for the purpose of irrigation.

These houseboats have option of single/double/triple and five bedrooms with a private balcony with chairs, a sundeck, a toilet and a fully-loaded kitchen. There is another separate rest room that also has a TV. You are accompanied by a trained cook, and 2 skilled oarsmen who maneuver 2 heavy plans of Anjili tree. Timely inspections are held by the KTDC for the safety of the tourists.

We got in to the houseboat at 12 Noon from one of the jetties in Alleppey. As soon as embarked.Our first impression was that the boat crew was warm and cheerful as they welcomed us with light refreshments. The booking agent introduced us to the crew and left us with a warm smile. As the boat slowly departed, we were shown around to our rooms. We left our luggage in the room and came back out into the open to do a little sightseeing.

The boat cruised along narrow canals where we saw the full glory of village life. People traveled in canoes to reach the main land as many houses there do not have an approach road. Even children were using canoes the way we use cycles and bikes to move around. It was amazing! We passed by other boats and it was a delight to see the guests there having a ‘Wow’ expression on their faces.

The boat gradually moved towards the lake and this was a completely different experience. We felt lost in the wide expanse, while also feeling like royalty. Just before we drifted on to the lake, the guide stopped at a small toddy shop where we could buy local snacks like tapioca, fish curry, Karimeen fry and obviously, toddy!

The boat stopped for lunch by 1 PM right in the middle of the lake, making us feel all the more awesome. After it was anchored, the boat started slowly rotating on its own. We loved the feeling it gave us, and we had a really good time. For lunch we were served fish fry, chappathis, rice and a few more dishes. They prepared the food differently, and it tasted superb. After we had our lunch, and the crew had theirs, the cruise resumed.

By 5:30 PM, the boat was docked near its owner’s house. The boats usually have their own regular parking slots. The boat’s TV was connected to the cable in the owner’s house and we were able to watch television for some time. We spent more time roaming around, though. By 8 PM, dinner was served, and we hit the bed by 10 pm.

And next day with a new experience

We got up in the morning to sounds from the village, songs from a temple nearby, the gentle thumps of village folk washing their clothes and the squeals of children playing. It was an amazing experience! I wish I could get up like this every day! By 8 AM, we were done with our break fast and we started cruising back to check out from boat. We left the boat by 9 AM, and our remarkable day came to an end ,we started traveling further to our next location .

POOVAR – WHERE RIVER AND SEA MEETS..

A blue sky, an island, a sandy beach, a river ,an estuary , a stretch of coconut trees, a lone boat and the blue-green backwaters . And of course, birds, fish , the boatman and us .

We were in Kovalam at the beach , sipping a tender coconut when the vendor asked us if we had been to Poovar . I recollected travel packages promoting Poovar , images of floating cottages and a couple of resorts vying for attention . We were not the typical beach bums , so we were willing to tear ourselves away from the sunny shores and look for newer shores. So, we went driving , in search of a coastal hamlet called Poovar along the River Neyyar .

Poovar is a trading center of timber, sandlewood, ivory and spices. It is believed that the trading ships of King Solomon landed in a port called ‘Ophir’, which is figured out as Poovar.'

The drive is not just beautiful, but it takes you into the heart of rustic India. A little bustle here and there, a few shops will convert a sleepy village into a market. The smell of the fish was everywhere – we took a detour and came to a jetty which only allowed tourists who were staying in the resorts ..We managed to talk the boatman into taking us for a little ride on the backwaters .

The coconut trees stretched out, kissing the waters here and there, as we sailed ..Until we saw two horizons ..one separating the sky from the sea, the other – a sandy beach separating the sea from the backwaters . The estuary here connects to the sea during high tides . I looked at the vast expanse of waters called sea, river, backwaters , estuary and wondered if there was anything so simple and yet so beautiful in life ! This is probably what they call happiness !

Poovar is just 32 kms away from Trivandrum

And here our shoot ended ,we had an amazing experience with people in Kerala. This trip was some what different from other trips . 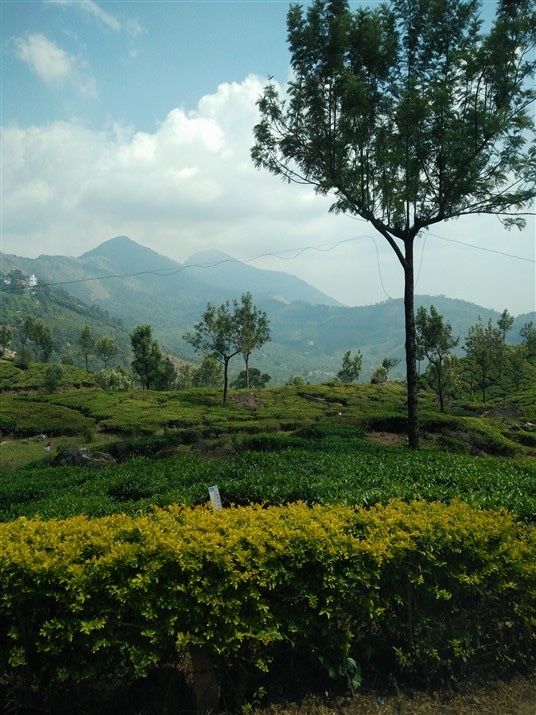 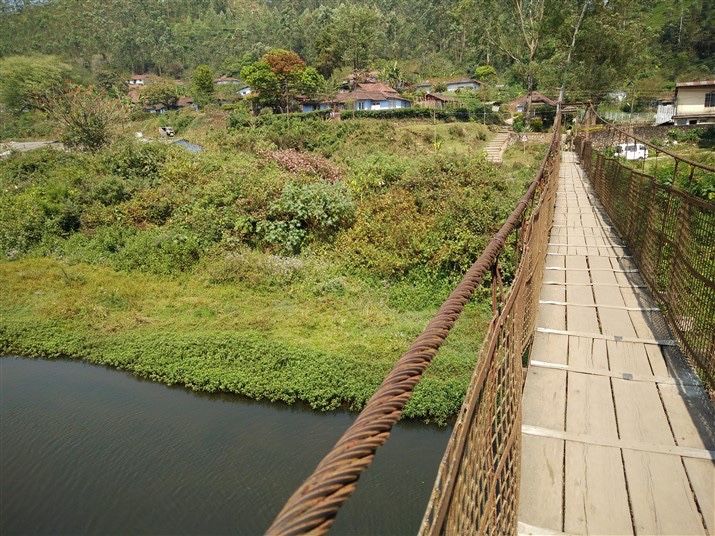 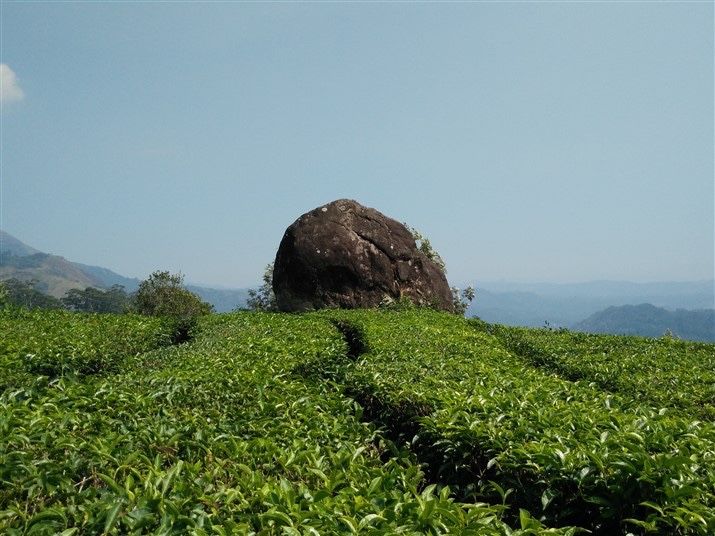 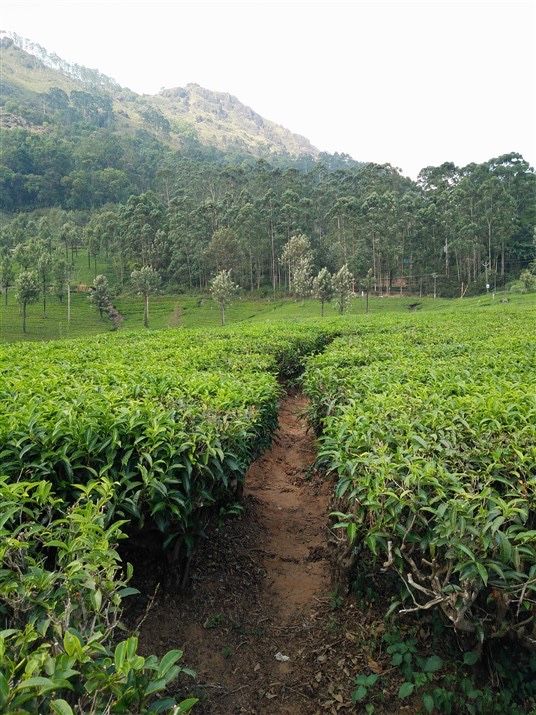 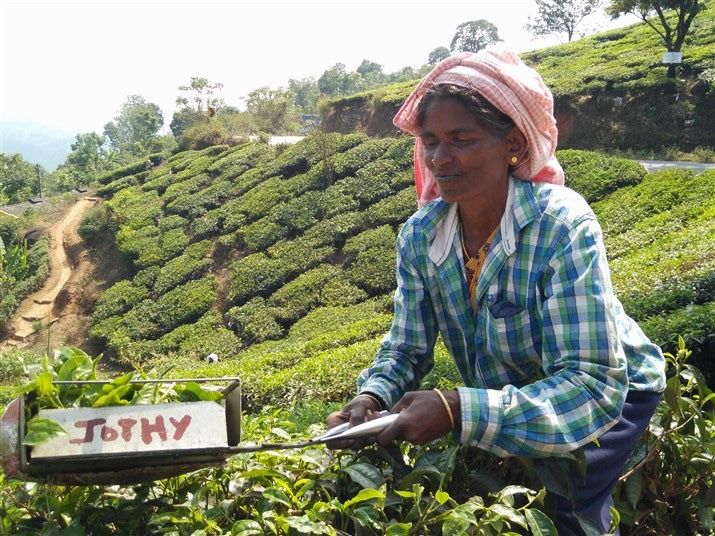 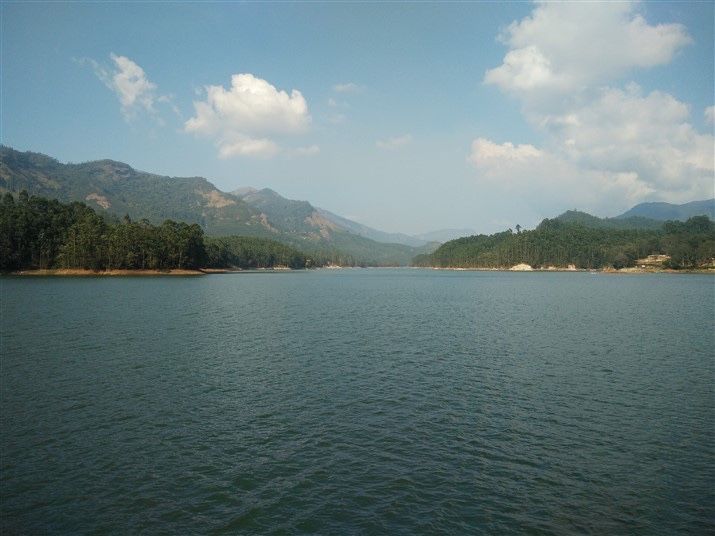 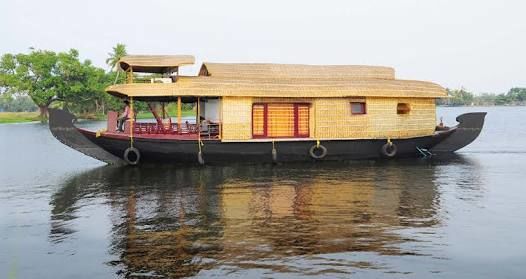 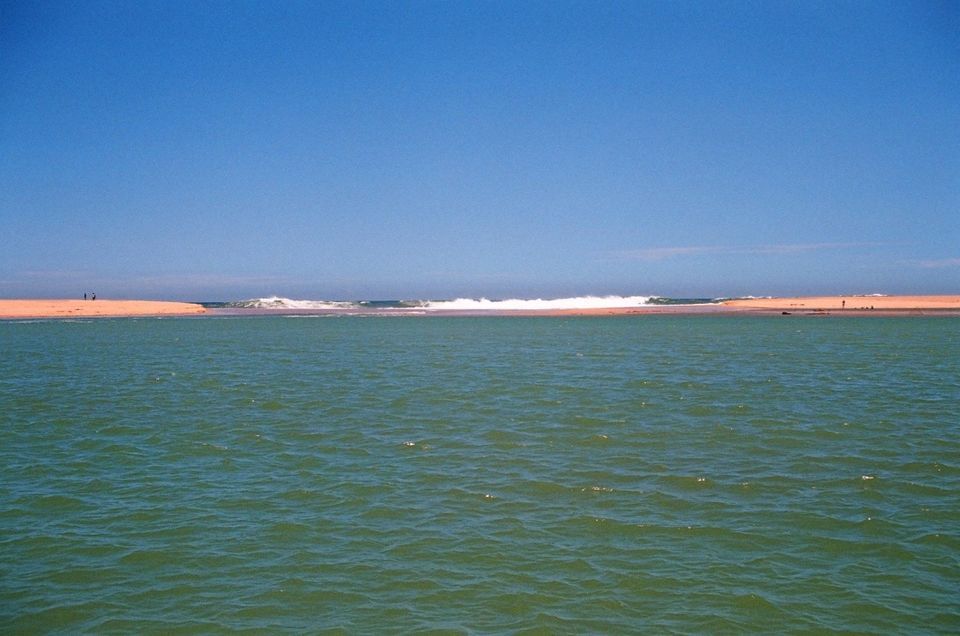 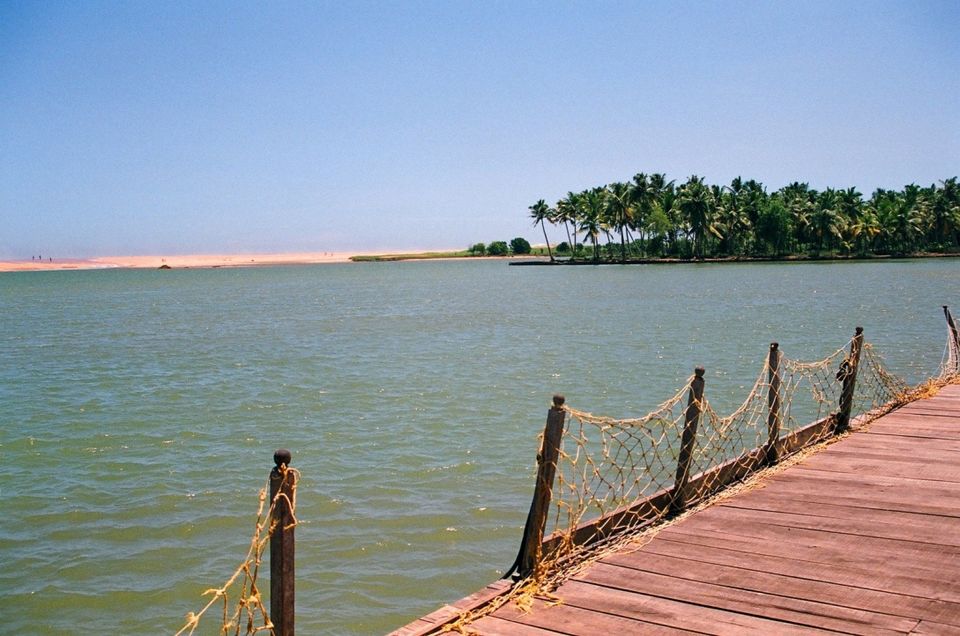 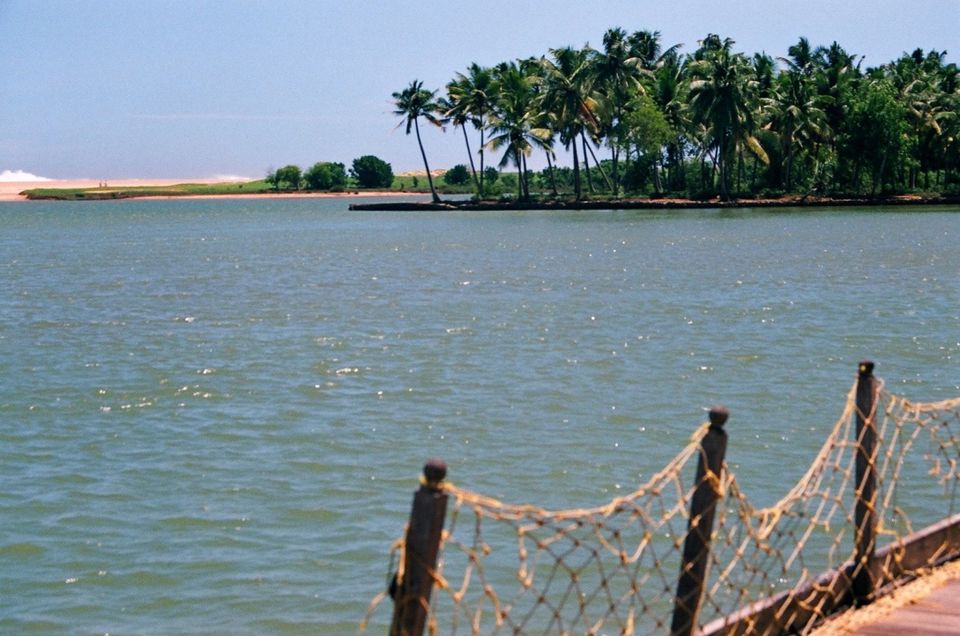 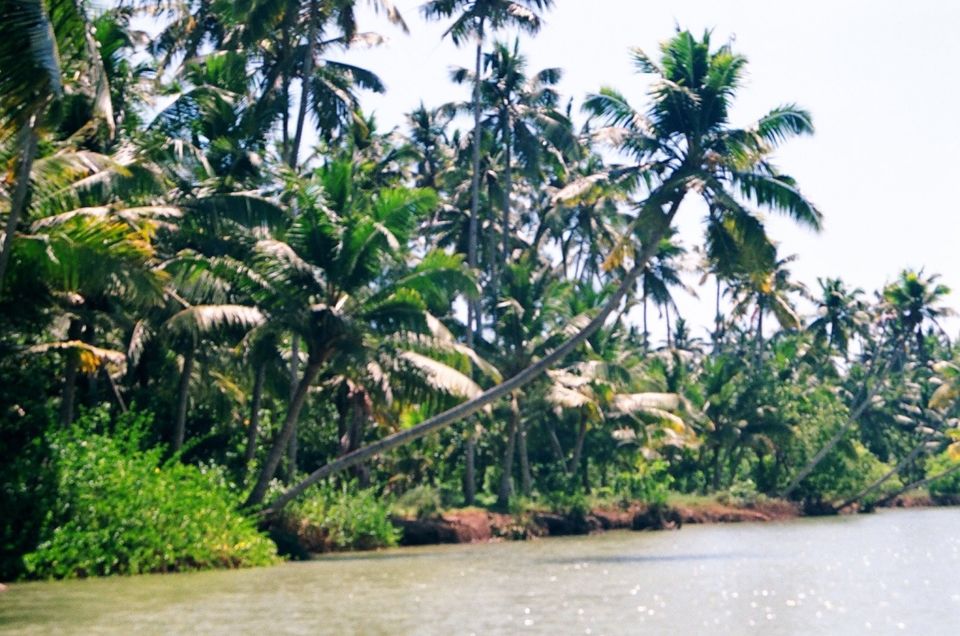 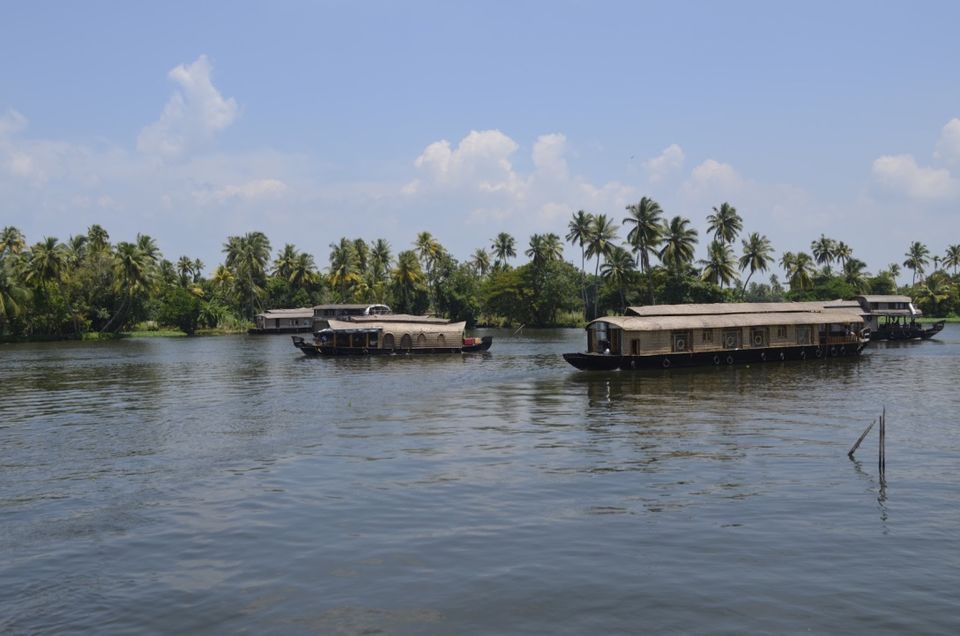 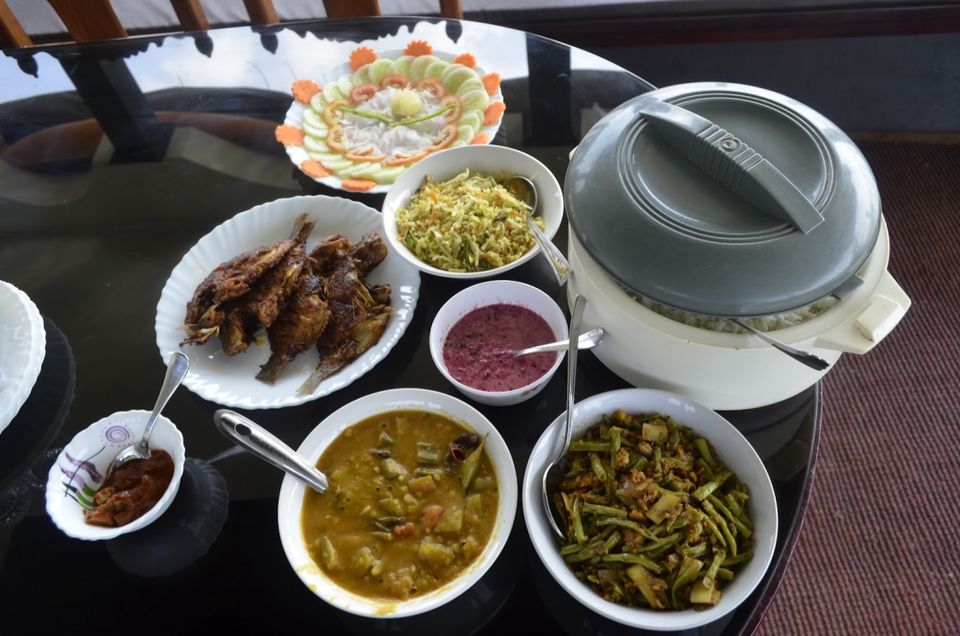 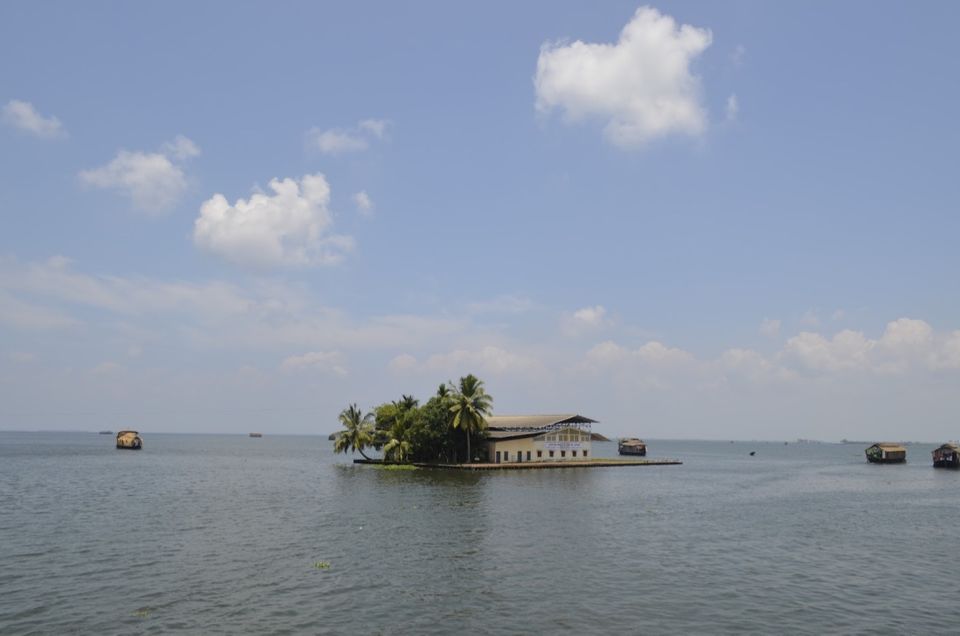 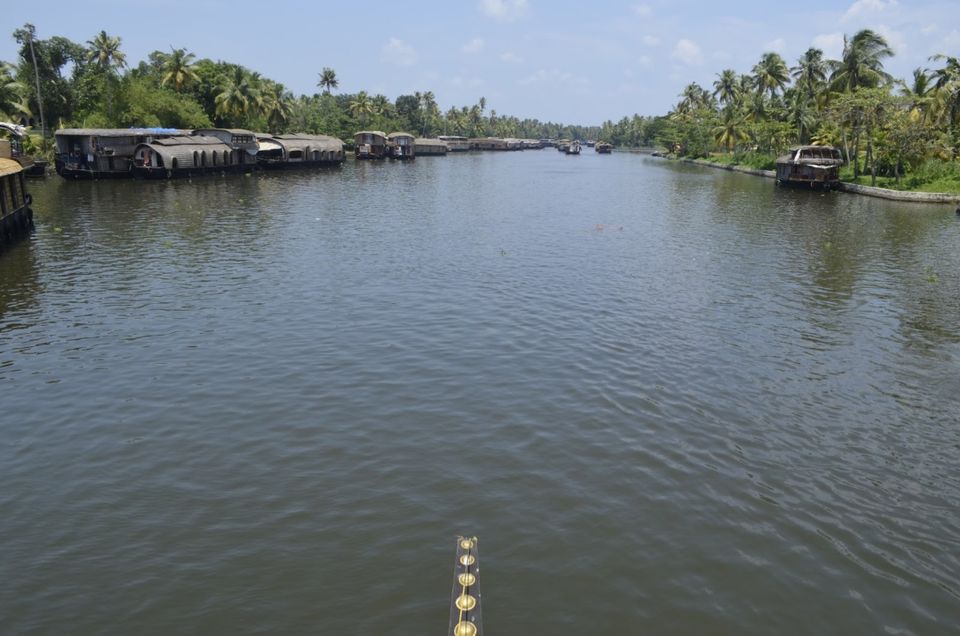 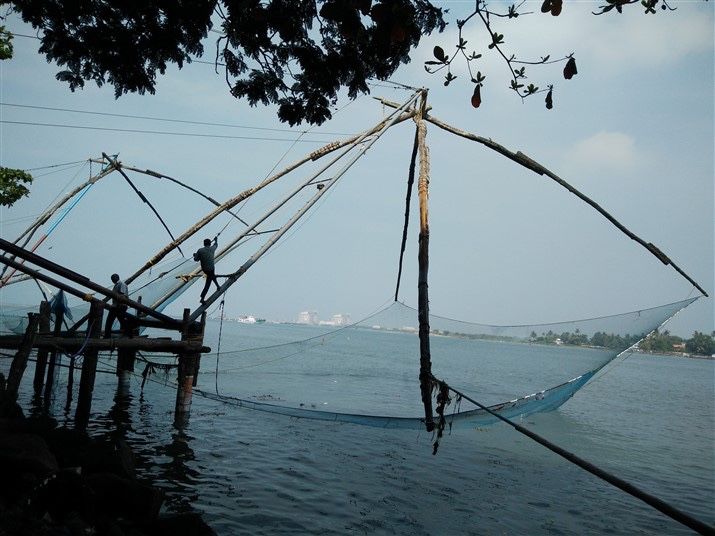 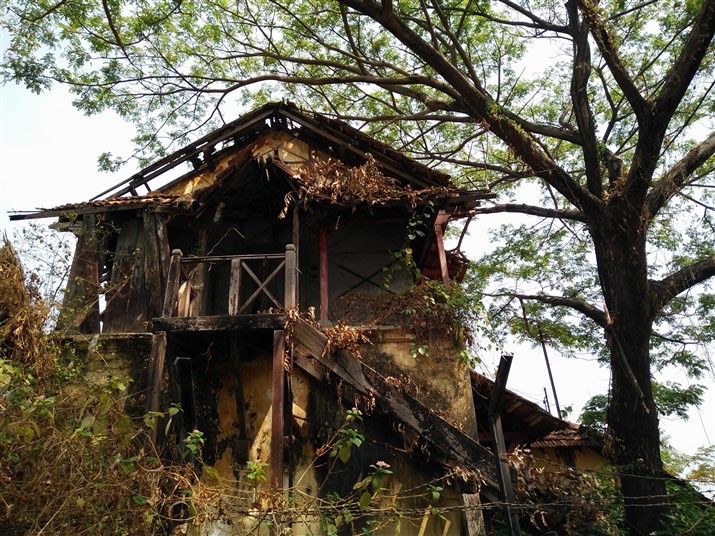 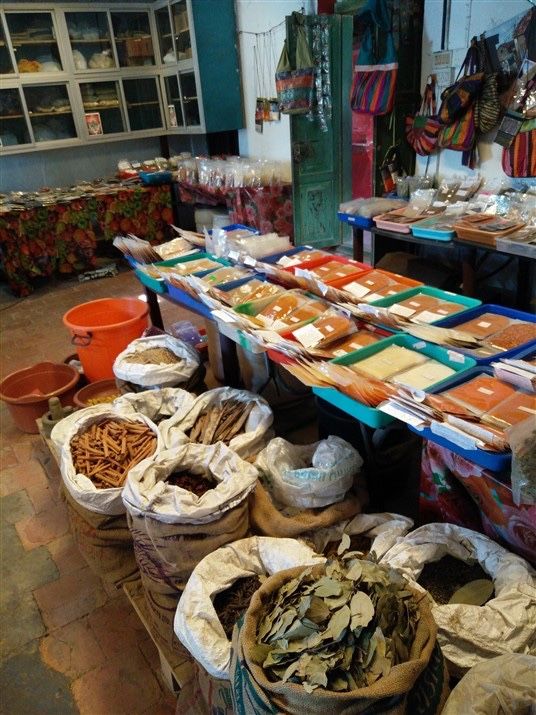 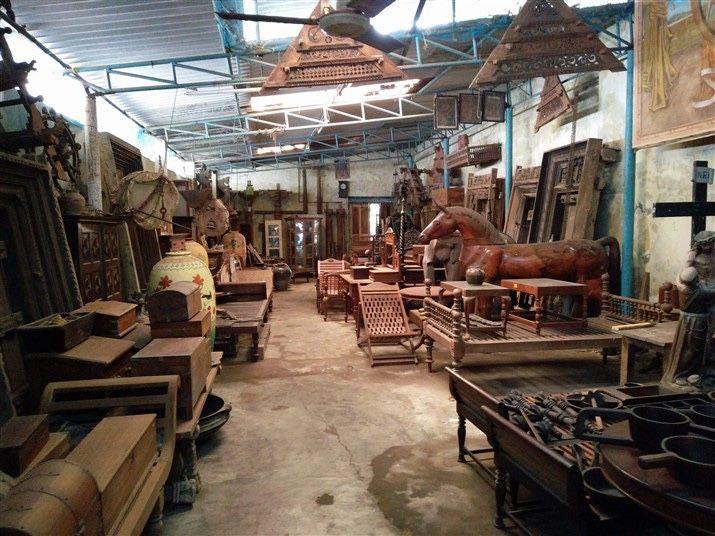 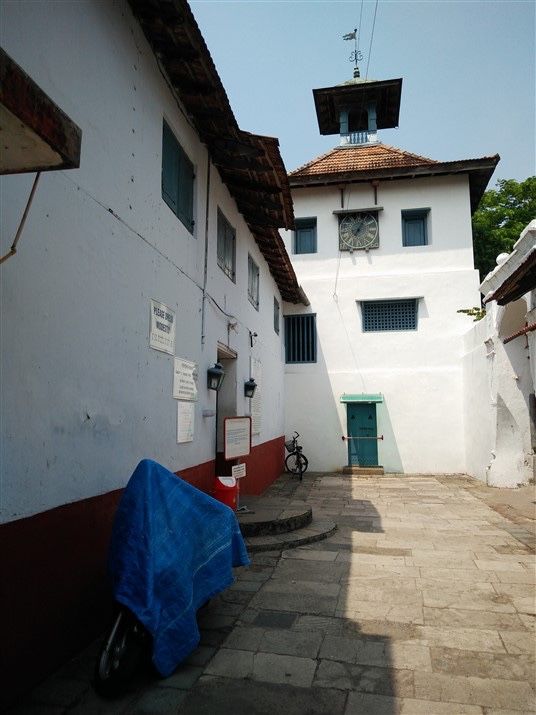 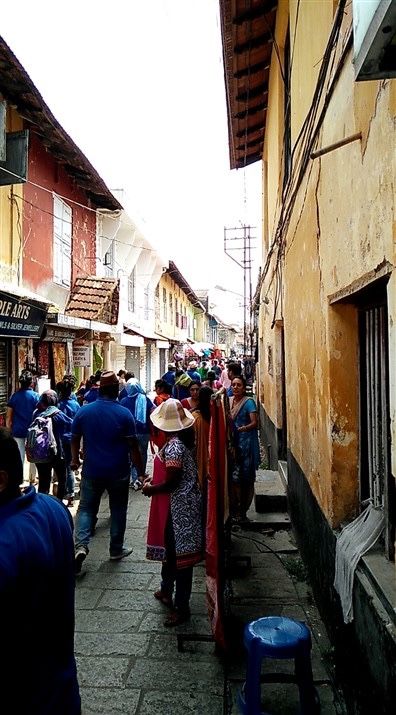