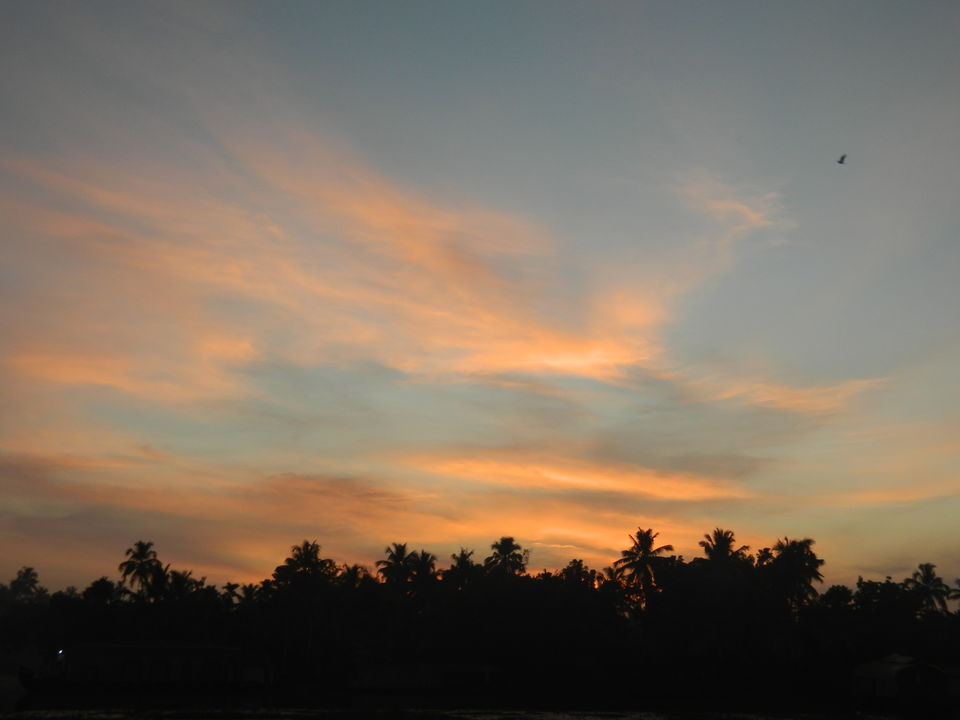 This place is famous for its boat races, backwater holidays, beaches, marine products. Alappuzha Beach is a popular picnic spot. The pier, which extends out to the sea here, is over 137 years old.

This district headquarters is also known as Alappuzha and is located 70 kilometers south of Cochin. It is often called the Venice of the East due to the canals that connect it to Kerala's famous snaking backwaters.

When we reached here, I was taken aback by its beauty. Surrounded by greenery that soon disappears into the watery world of villages, small shops, paddy ground. As I entered the houseboat, I was offered a welcome drink. Soon, the captain of my houseboat pulled the anchor as a sign that journey on the network of waterways through the inland of Kerala began.

Standing on the edge of the boat, I can feel the air in my hair, smell of the coconuts. The beauty of the Arabian sea was a treat for my eyes. I was surprised to see my vegetarian husband turning into non-vegetarian. He was smiling eating fish and enjoying the scenery. And then he said to me, you know life should be like this!

As the evening approached, the sky was covered with a blanket of stars. The surrounding was less noisy and the waters calmed. Never before had I seen such a stunning view of the night sky. It was breathtaking! The night ended with a delicious dinner and some soft music that was played to relax and have a good night's sleep.

The morning welcomed me with a beautiful view of the sunrise and pleasant weather. After a good breakfast, the houseboat moved slowly towards the mainland of Kochi, where my houseboat cruise was to end.

Alappuzha owes its modern existence to the efforts of Diwan Raja Kesavadas in the second half of the 18th century. Diwan Raja Kasavadas played important role in making Alappuzha a major port city in his time and for developing the system of inland canals, used for transportation and navigation, that is seen today.

A visit to this place is incomplete without making a journey by boat. In some cases, such as visiting Kuttanad, boats are the preferred method of transport as some locations are inaccessible by road.

There are ferry services between places, widely used by the locals, which are a scenic way of getting around.

Boat service is available to Kottayam at every two hours interval starting from 7.30 am. The fare is Rs. 18 and the trip takes two hours

The name Alappuzha means "the land between the sea and the network of rivers flowing into it". It is a fitting name: there are a significant number of canals, backwaters, beaches, and lagoons in and around the city.

Alappuzha, and Kerala, in general, has excellent weather due to its proximity to the ocean. The temperature rarely goes above 35 degrees Celsius and never below 20 degrees. The best time to visit is from September to March. The monsoon, from June to August, always brings heavy wind and rains. This is an excellent time to visit if you want to partake in a bit of monsoon tourism.