“  the starting point of all achievement is desire” ..... It was one of my favourite trekking experience and finally the long awaited journey to experience the beauty of the mesmerizing Meesapulimala. Thanks to Joby for the support.

Our journey beginned  from Munnar following the google map, which guided us to an off road which was  not commonly used. At times it give an intrusive  shiver when we realized that we were alone in the vast tea plantation with lot of mud roads going here and there. Luckly, we entered to the common road after 7km of loneliness. The drive gave  an extreme off road experience and it tested our four wheel drive Mahindra .

By 12.30 pm, we reached Kolukkumala base camp and had our pongal with spicy chutney and omlette, which was taken from Hotel Siva- Suryanelli. At base camp, the Harrisson estate people charges Rs.100/- per head and we started the dream chase by 1.30 pm. We started with half litre water and some toffie offered by my son Zayan. Till the estate boundary there were direction marks to Meesappulimala. We saw lot of people coming back and most of them are returning after halfway to meesapulimala, due to shortage of water or the hectic travel. But the happiness on some faces who had accomplished the target give hope to us.

After completing 1.5km we took our first resting point and had our first sip of water. Our legs were paining and some small woundes were pulling me off  from completing my dream. There were two more hills  to be completed before stepping to meesappulimala and we completed the first one. There we were able to see a vague view of our destination. The aesthetic view and cold air excited us to forget  the pains of long walks and poured confidence to us. On half way, we found the trekking is not easy as we thought...leg sprain hold us back and reducing level of water we stored for trekking  made us to rethink.

A group of studets crossed our resting point and they were shouting about the clouds that we can see below our feet after reaching the top station...they were also hailing the beauty of the ultimate meesappulumala. We started forward and this time with more enthusiasm n vigour.... Yes, we reached the base of the mountain and now there is 2649meters elevation in front of us. The royal hillstaion with 70 degree slop with its top covered with the mist stood in front of us...no one cannot deny that call.

We decided to make three resting point so that we can wet our dry throats. At the base there were lot of people who decided to stop trekking and those people coming down was also demotivating them saying the trekk is not easy. It was true, after taking few steps , we felt drained and we took our first resting point on half way, earlier than we predecided. Less oxygen in air and earth’s pull towards  it centre made us sit in the gray grass. We could see the way  we passed over and to my surprise the mountains we completed seemed too big and which gave us  much more desire to complete the mission. The area was so soothing and the Sun was beaming radiantly on the valley. Our water got almost finished and there was only three sip of water remained. One boy who was following us from the half way came to us and asked for some clicks with his camera. The drained throat made us less interesting to have a chat with him but we could do  some clicks for him. By the time we were having remaining water we all had in the bottle cap,a boy wearing a blue t shirt came to us . He seemed tired,when he requested for some water, we looked each other and with all hesitation but concerning humanity, we gave a cap full of water to him . Hardly four or five people were there in front of us who were dedicating their energy to  fulfill their journey.  But the agony was sweeter. Suddenly a thick mist covered them and we missed the view and everything was less visible around us. I was frightened as we were not able to see each other. We decided to lie on the grass till view gets clear. Slowly the mist moved and we found that we reached almost half of the mountain. We could realize that we were very fast and guessed to complete our journey by 3pm. Since we took more resting points and shortage of water we expected to touch the end by  3.30pm.

Finally we could have a vague view of top and some group was  in extreme joy and they were shouting and celebrating their achivement. I was so excited thinking of that moment, because some footsteps would bring me to my dream destination. Exactly 3.35 pm we reached the top and I screamed the loudest like a child ....the extreme happiness made me a kid again  .... I was out of control  and ran around the top.. to see the incredible beauty of nature’s sketch ...yes ... the clouds were flowing below me...the cool air...the thick white blanket of mist...I closed my eyes .....  nature was telling me to  open my eyes to see the heaven in earth ..... and I slowly opened my eyes.... I could feel tears coming out seeing the beautiful valley, the far view of heart shaped lake, rocky mountains...yes ..... mother earth...you have enough treasures that a mankind cannot destroy..I bowed my head seeing the nature’s spectacular beauty.... it heals ..... I remembered a quote in a travelogue "ego and money, drop both when you start your travel, coz both are useless in this travel" 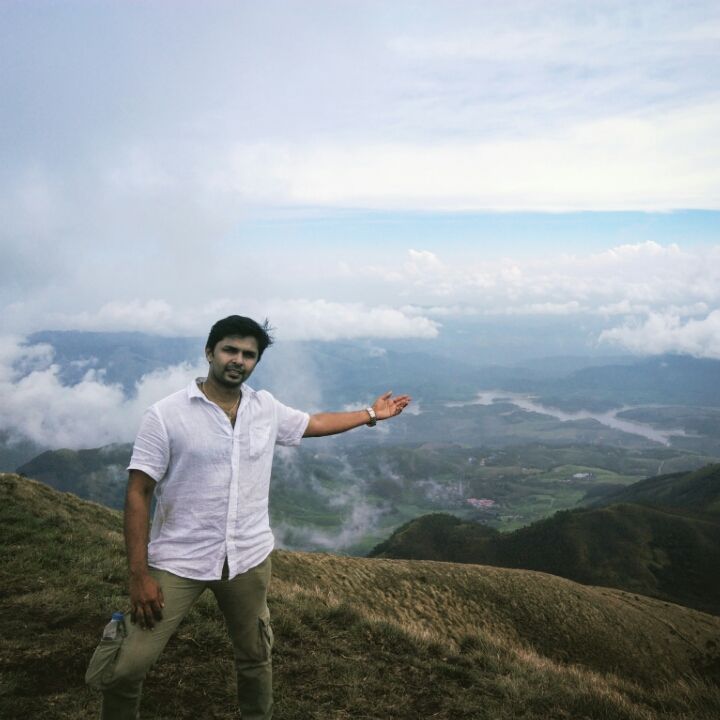 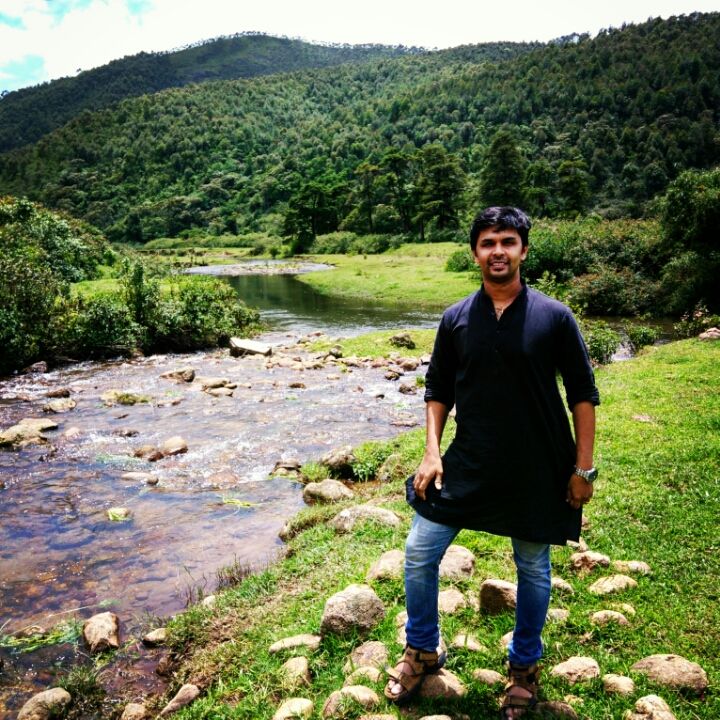 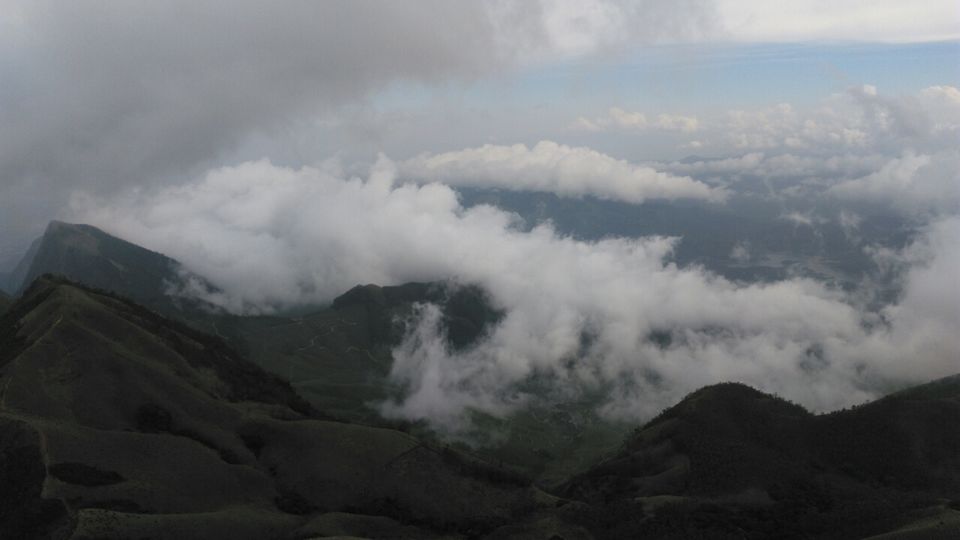 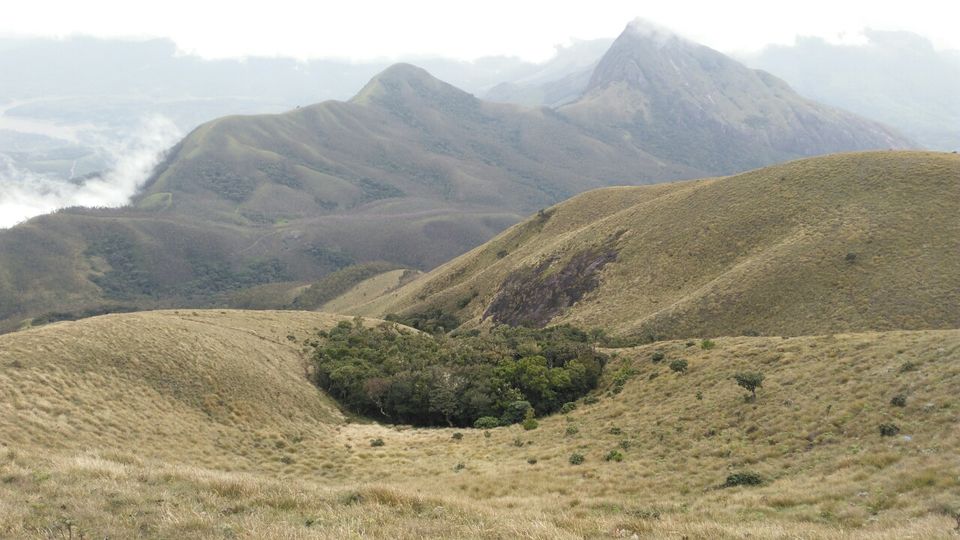 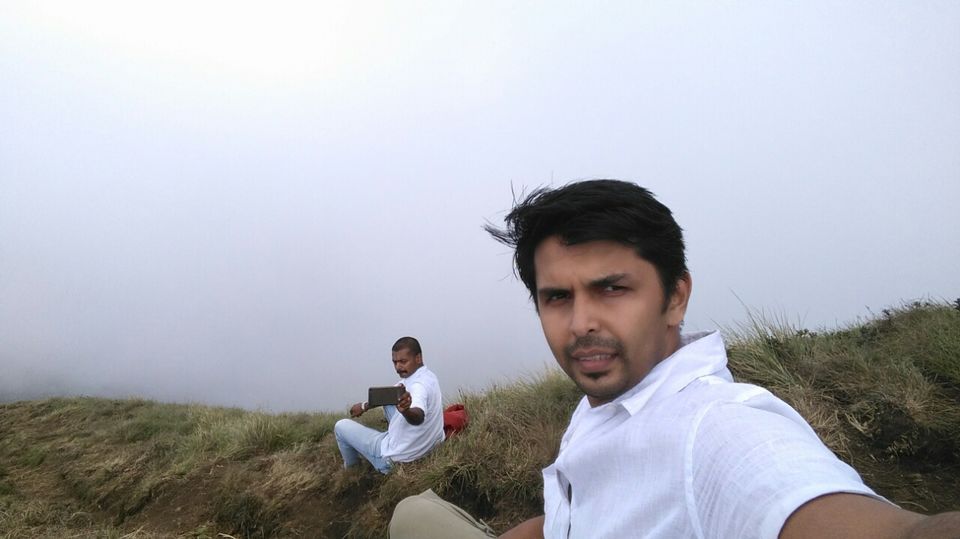