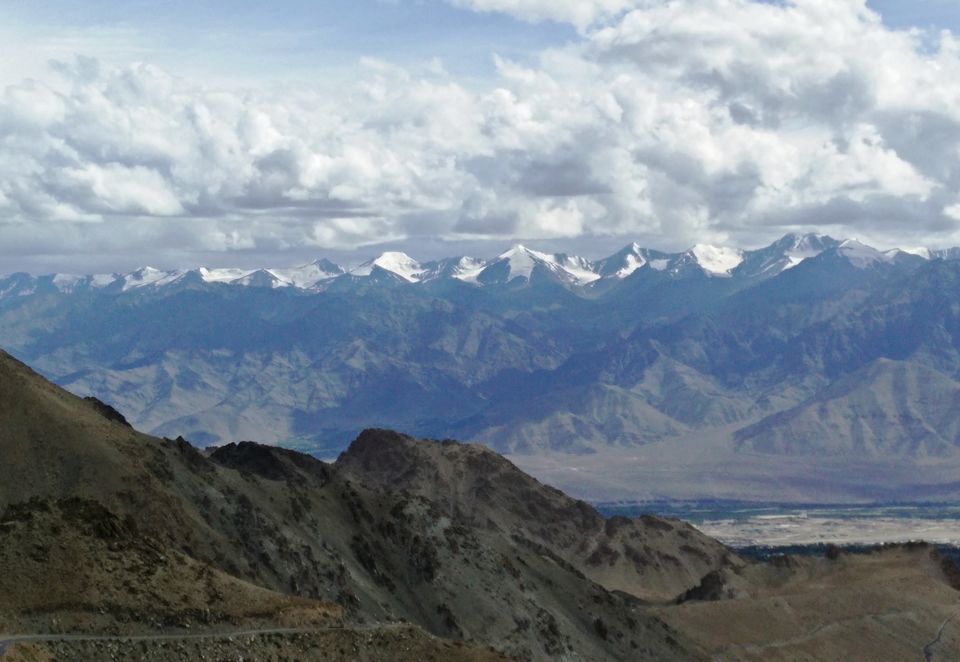 Proud to say that I am one of those lucky souls on this Planet who got the opportunity of experiencing the Serenity of the Heaven on Earth twice in two years. It is indeed the Land of Lamas, the Paradise, Ladakh. There is so much to describe that just 1 write up won't do justice to this Masterpiece!

Heard loads of things, read unending descriptions, seen mesmerizing visuals about Ladakh, but nothing better than to feel it. Ladakh is a district in the state of Jammu & Kashmir, India known for its untouched alpine beauty. It is surrounded by 3 mountain ranges - Zanskar Ranges, Karakoram Ranges and the Himalayan Ranges.

The best time to visit Ladakh is during the months of June to Mid of September and yes, remember to pack a few good woolens and jackets. Riding here is considered a Dream and the Ultimate test of every Biker. But, for those who can't ride a bike, don't be disappointed. There are other means you can reach the dream destination. You can directly land at the Leh airport and start your voyage (I did this the first time) or build up trip gradually by either starting from Manali or Srinagar.

I found the one below a safer option, allows your body to adjust to the sparse Oxygen and High Altitude, in addition to the phenomenal spectacle it offers.

One can reach New Delhi, the Capital of India, by different means - Air, Rail or Road. There are AC Volvo buses that ply from Delhi to Manali (approx. 540 km) in Himachal Pradesh. Bus is the most preferred means of travel to Manali as it is cost effective and takes about 12-15 hours for an over night journey. The bus starts from Majnu ka Tilla, which is about an hour from the New Delhi Domestic Airport in the evening. This bus takes you through various cities in Northern India like - Sonipat, Panipat, Karnal, Kurukshetra, Ambala, Chandigarh, Pinjaur, Shimla, Mandi, Kullu, etc. The roads after Pinjaur are single lane and curvy, so fasten your seat belts and get ready for a Roller Coaster ride in the moonlight.

Note: For people suffering from motion sickness, do ensure that you eat light and take prescribed medicines. Bus cost varies from Rs. 700/- to Rs. 1500/- depending on the operator and bus time you opt for. You can also reach Kullu, a neighboring city of Manali (approx. 40 km apart) by air from Delhi.

Open your eyes to sight of beautiful, lush green valleys, daunting mountains and pleasant burbling sound of rivers. The bus will drop you at Manali (6,726 ft. above sea level) at the designated bus stop in the morning at about 7 am. After freshening up, head towards the famous Mall Road for some quick shopping if time permits.

Start your journey towards the mighty Himalayas, with the first move towards Jispa enroute Rohtang La (13,051 ft) & Keylong. You may like to stop by Rohtang for a click, but believe me there will be plethora of ineffable beautiful landscapes on your way ahead.

View from the Top of Rohtang 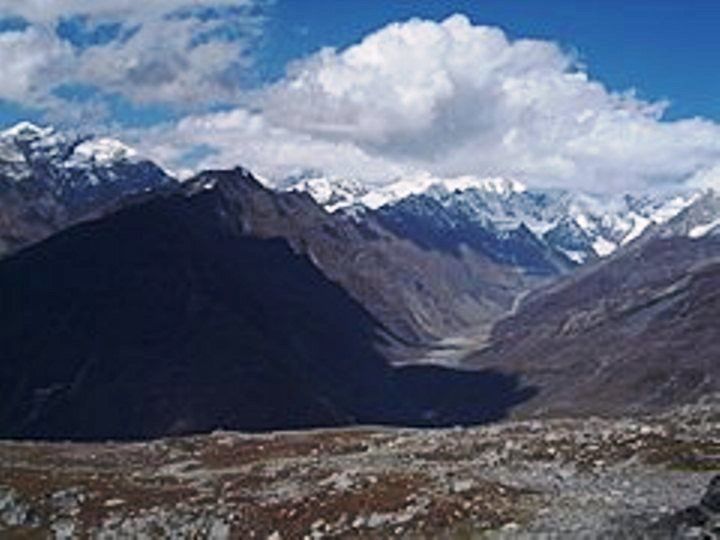 Below is the fascinating Route Map you are set to follow.

This is the journey you are Set For 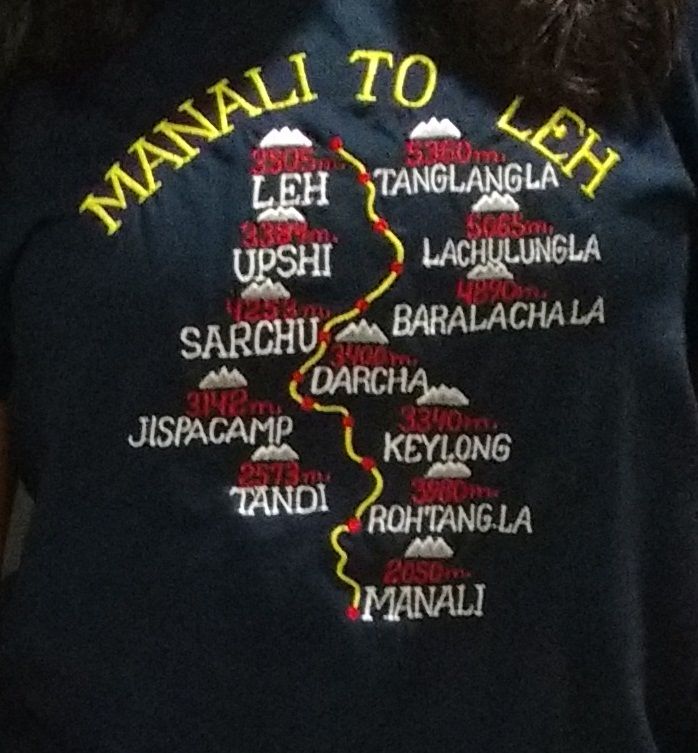 You can choose to stay at Keylong (Hotel) or Jispa (Camps). Personally, I would suggest a Hotel as there are more Camping opportunities coming along in the next few days. :)

Start early Morning after Breakfast, to stamp on the grounds of Heaven on Earth named Leh. Enroute you will come across beautiful landscapes of Baralancha-la (16,040 ft), the beautiful Chandratal Lake, Taglangla - claimed to be the Second highest motor-able pass in the world (17,582 ft), Moore Planes - a Natural phenomenon - 40 km plateau flanked by tall mountains & Upshi. If you are sleeping on this route means you are missing the most precious times of your life. 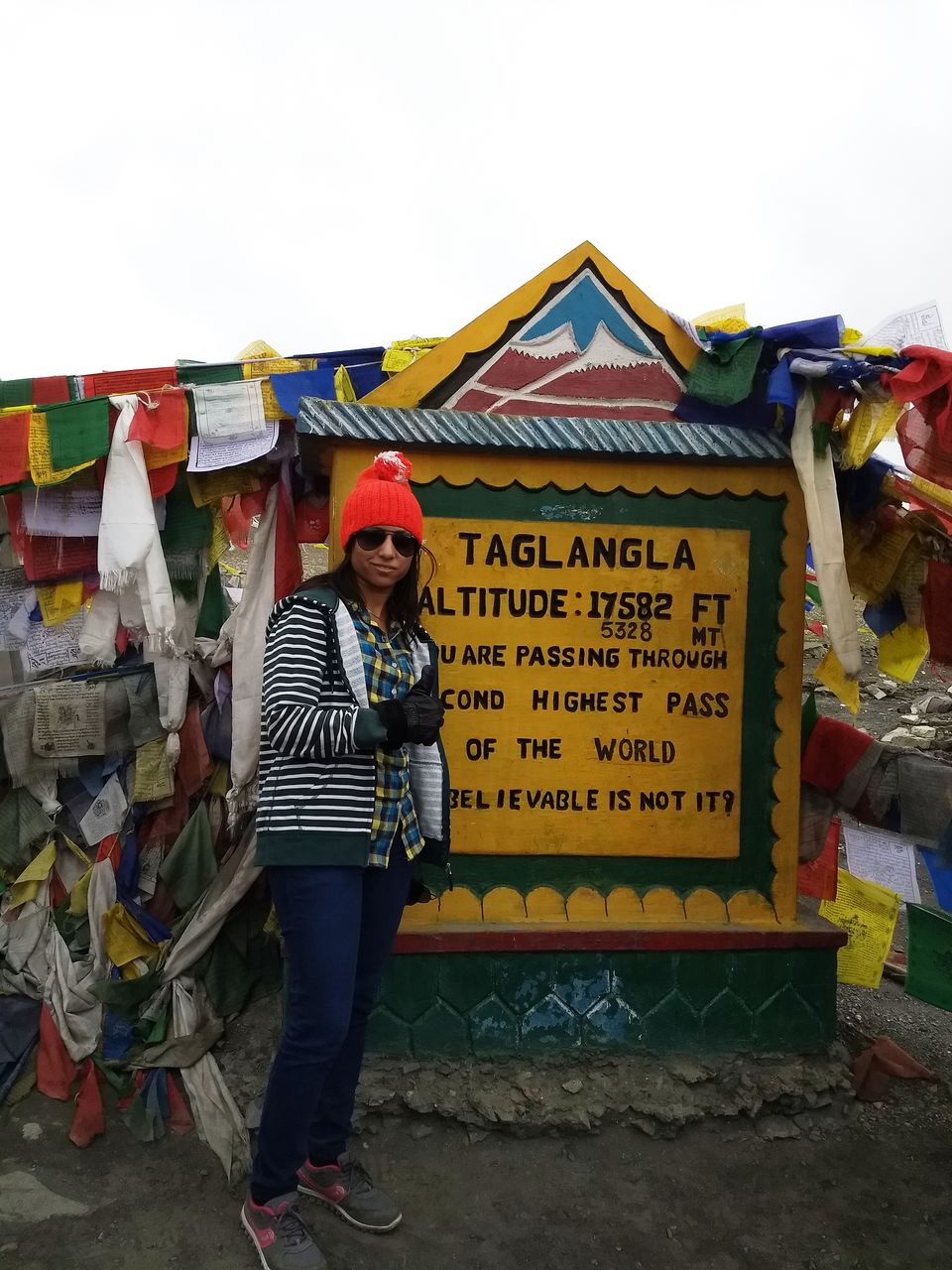 Scenic View of the Moore Plains 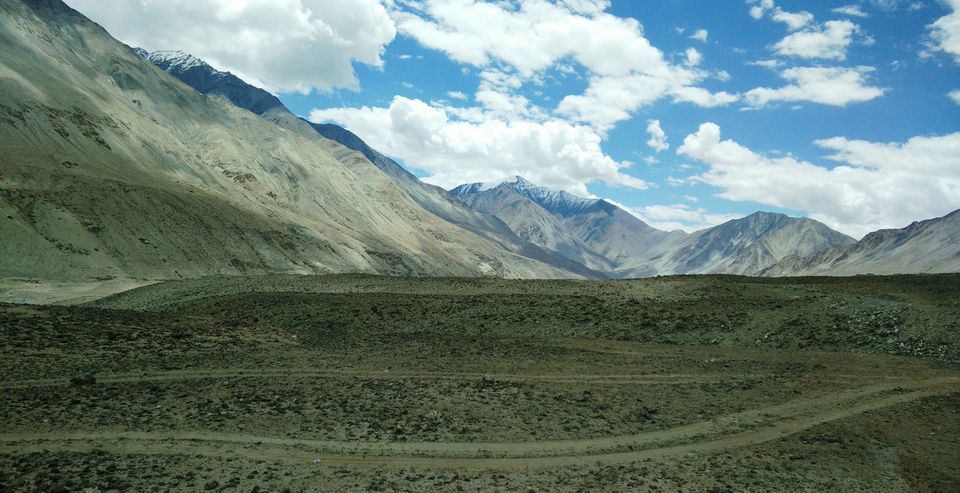 Note: This is the longest route on the journey, you are suggested to start early and reach by evening, you will be tired & exhausted by the time you will reach Leh. You will cross a valley on the way before Pang in which you are prone to feel breathlessness as its surrounded by mountains on all sides and is deprived of fresh air. Keep drinking lots of water as this will help you maintain the Oxygen level in the body.

There are possibilities you suffer from Altitude or motion sickness, that might cause giddiness, vomiting, so do not forget to carry medicines prescribed. However, by the time you reach Leh, your body would have adapted to these high altitudes, so gear up for the adventures ahead.

The magical word "Juley" will fall on your ears everywhere in Ladakh. You can say Juley when you want to say hello, goodbye, thank you, how are you, nice to meet you and you’re welcome. Another distinctive sight will be horizontal and vertical Tibetan Prayer Flags flying everywhere.

First visit the famous Hall of Fame Museum - a place to feel the Pride. It displays a wide range of weapons - tanks, guns, bofors, etc. in addition to insights about the different wars that India has fought against its neighbors, the bravery of our Soldiers, the enduring and daunting life they lead on the borders especially the Siachen glaciers where the temperatures drop to as low as -50°C. This is a must visit place and make sure you don't miss it. 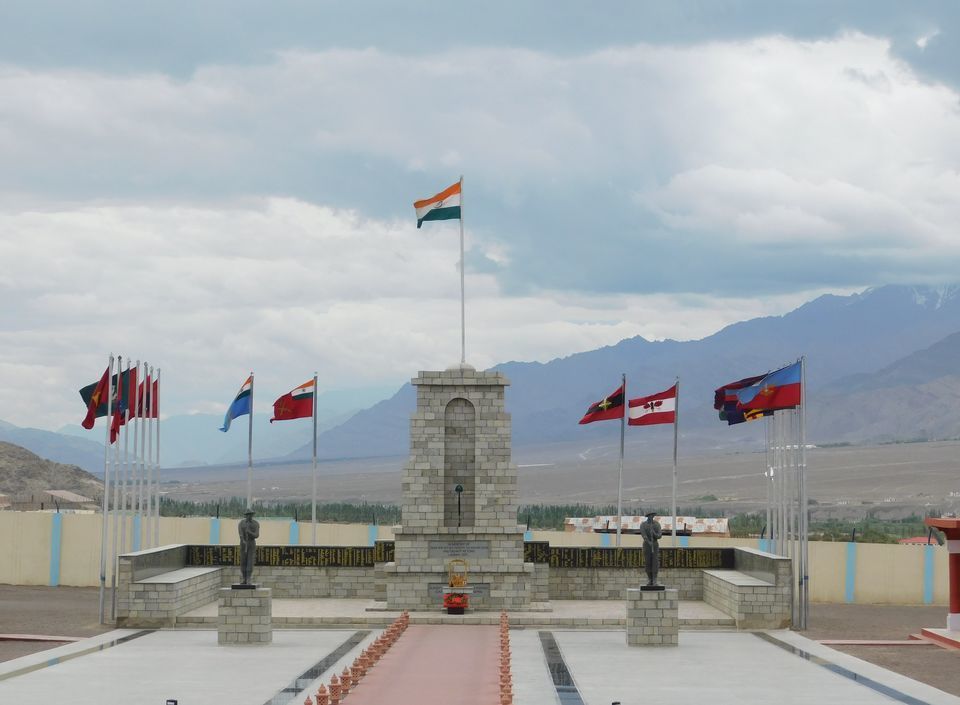 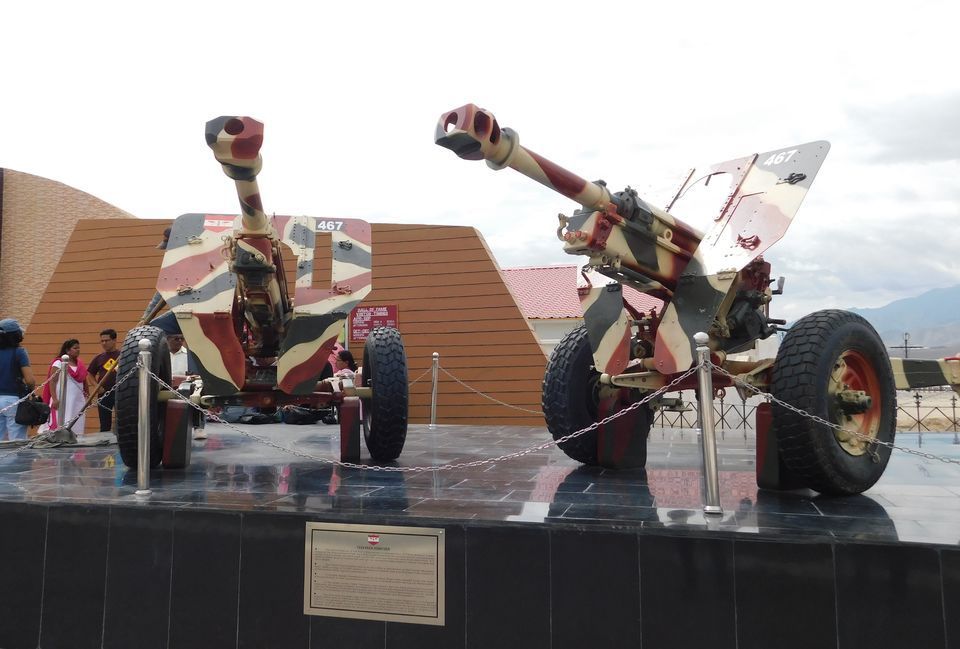 Next you can visit the Spituk Gompa or Monastary. This one has a steep flight of steps to reach the top where the Gompa is located. There are huge statues of different idols whose faces are covered with cloth inside the Gompa. Every year, Gustor Festival is held at Spituk from the 27th to 29th day in the eleventh month of the Tibetan calendar. In addition, you will get a breathtaking view of the Leh Airport with flights taking off and landing in the distance. 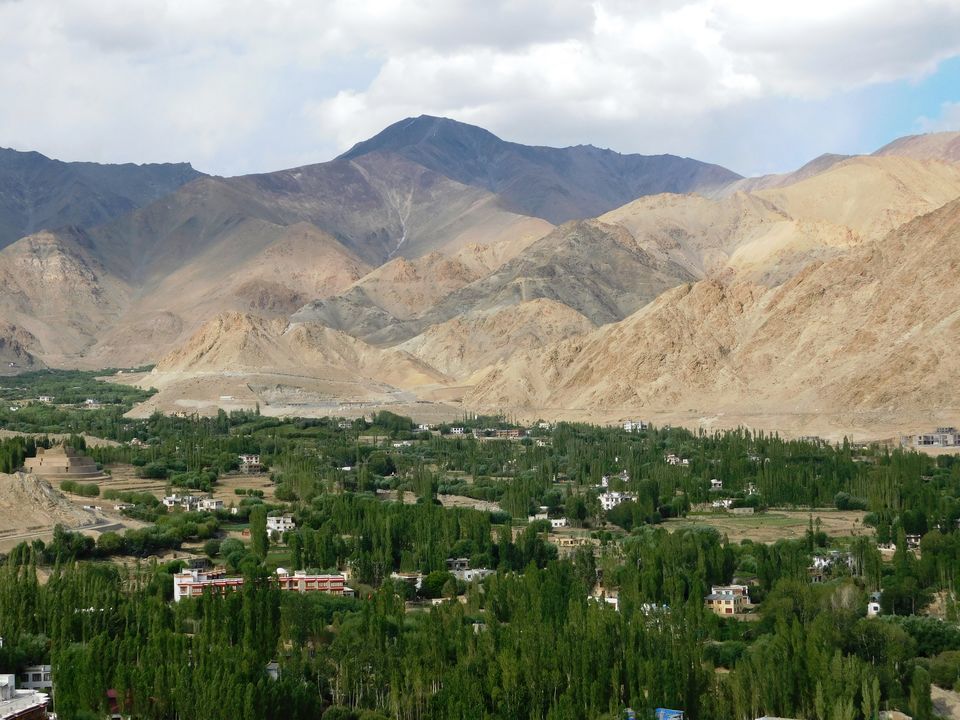 Head towards Gurudwara Pathar Sahib, a beautiful Gurudwara constructed in memory of Guru Nanak. According to a local legend, once a wicked Demon live in the area who terrorized the people where the Gurdwara is now situated. Guru Nanak came to their rescue and blessed the people with sermons. Seeing this, the denom pushed a boulder from the opposite hill towards Guru Nanak while he was meditating. When it touched the Guru's body, it softened like warm wax and came to a halt against Guru Nanak's back whose shape can still be seen on the boulder. You can also have Prasada at the Gurudwara Langar (foodcourt). 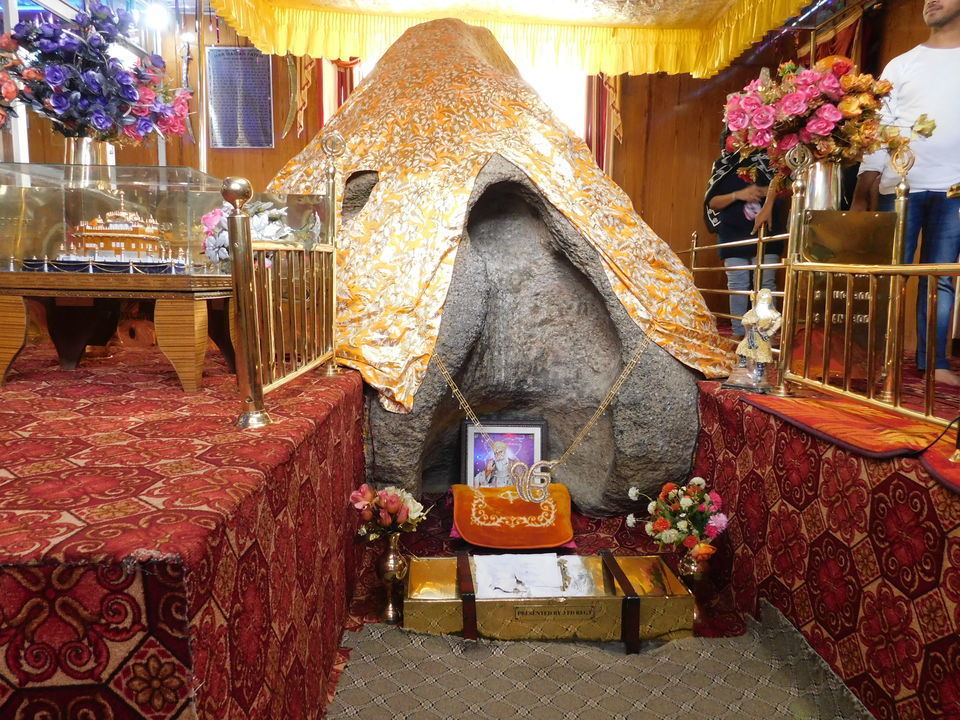 As you move further, you will see the mysterious Magnetic Hill. Objects and cars on the hill may appear to roll "left hill" in defiance of gravity when they are, in fact, rolling downhill. It appears as though the car is moving in the opposite direction when it is set to Neutral due to some magnetic power that the mountains possess. 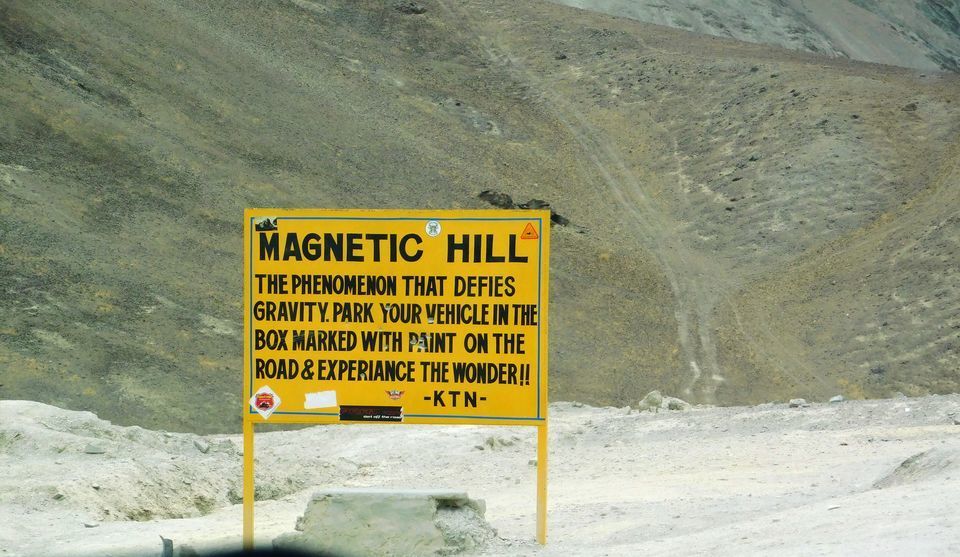 When you set your foot again on the curvy roads, what awaits you next is a fascinating sight - the Sangam of Indus and Zanskar rivers. One can clearly view the distinctive colors at the point where these two rivers meet. The famous Hindi song - "Sanam Re" was pictured in this valley. You can also enjoy River rafting here if time permits. This valley is completely frozen in winters and you can even enjoy the famous Chaddar Trek on the ice. 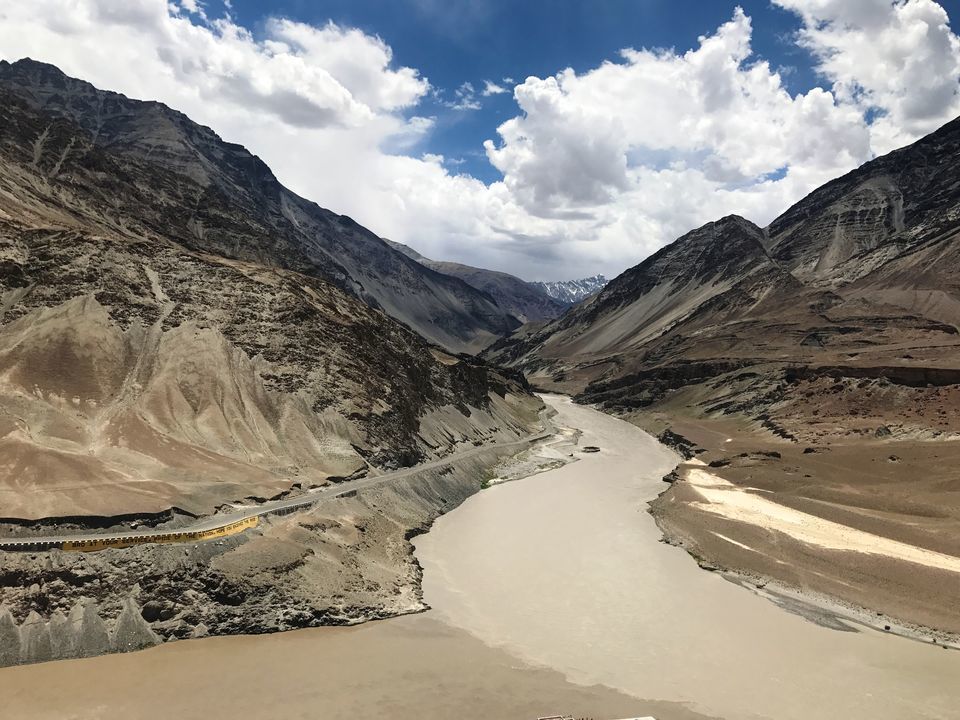 In the evening, you can walk down the history lane by visiting the Leh Palace located in the center of the city. It is a eleven storey palace whose construction was completed in the 17th century by Sengge Namgyal. Built of stones, wood, mud and sand, the walls of the palace create a comfortable ambiance, it is cold in harsh summers and warm in the winter days. You can also see a 15 minute video film that will introduce you to the palace and its ruling inhabiting Kings. 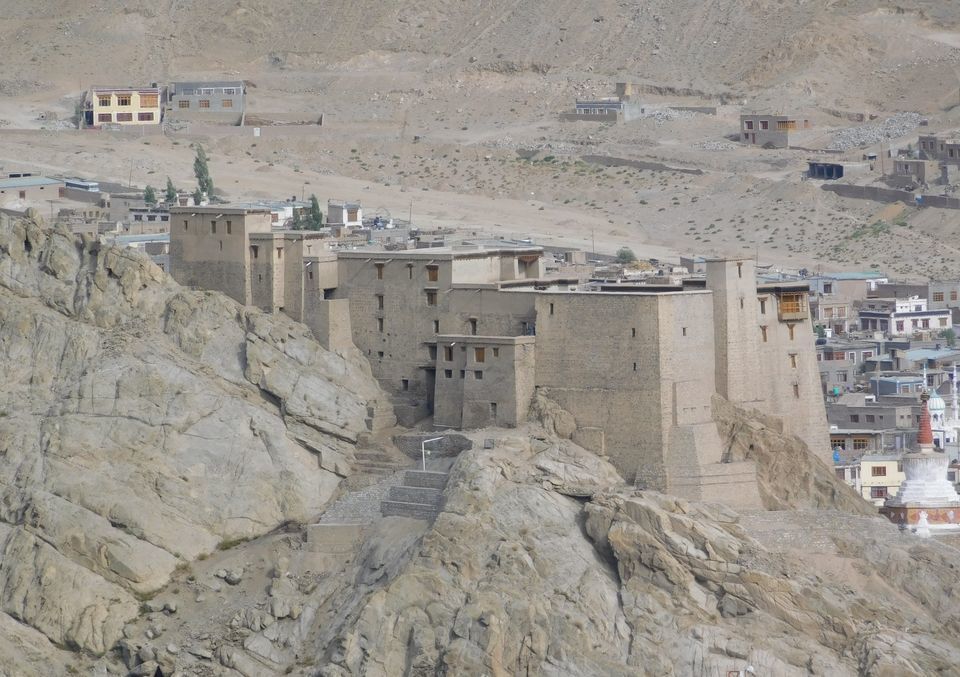 After a long, tiring but exciting day, head towards the Shanti Stupa to end the day on a peaceful note. Constructed in 1991, the Stupa contains the relics of Buddha at its base. It is famous not only for its religious significance in Buddhist culture but also its location which provides breathtaking views of the valley. Also known to provide the best sunrise and sunset views, the Stupa is illuminated with lights at night. 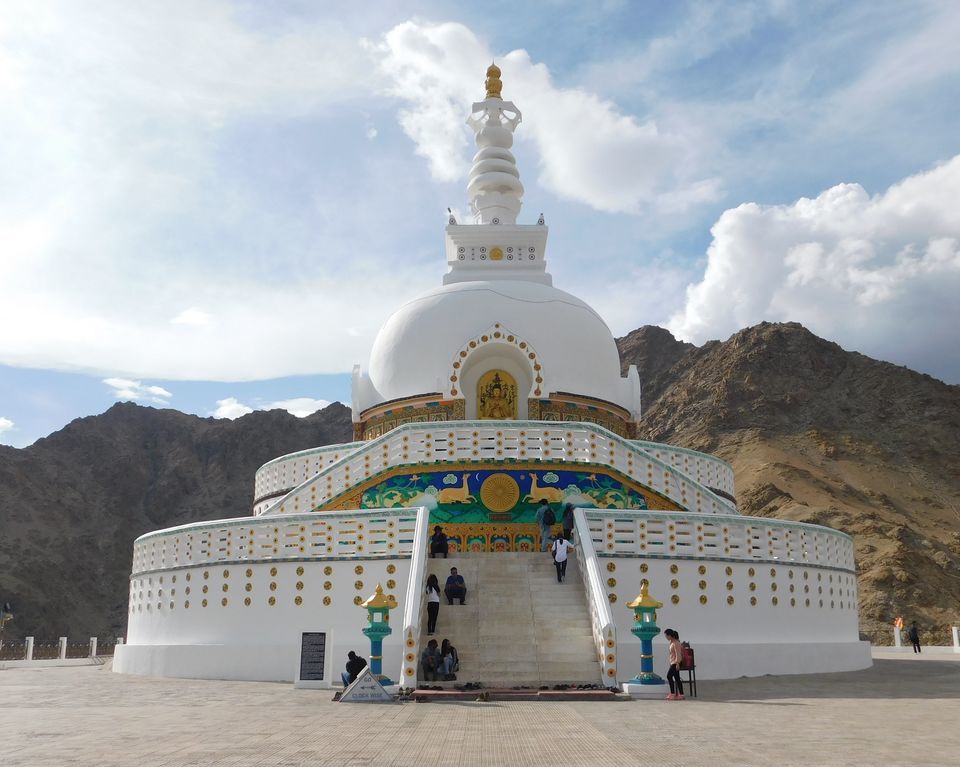 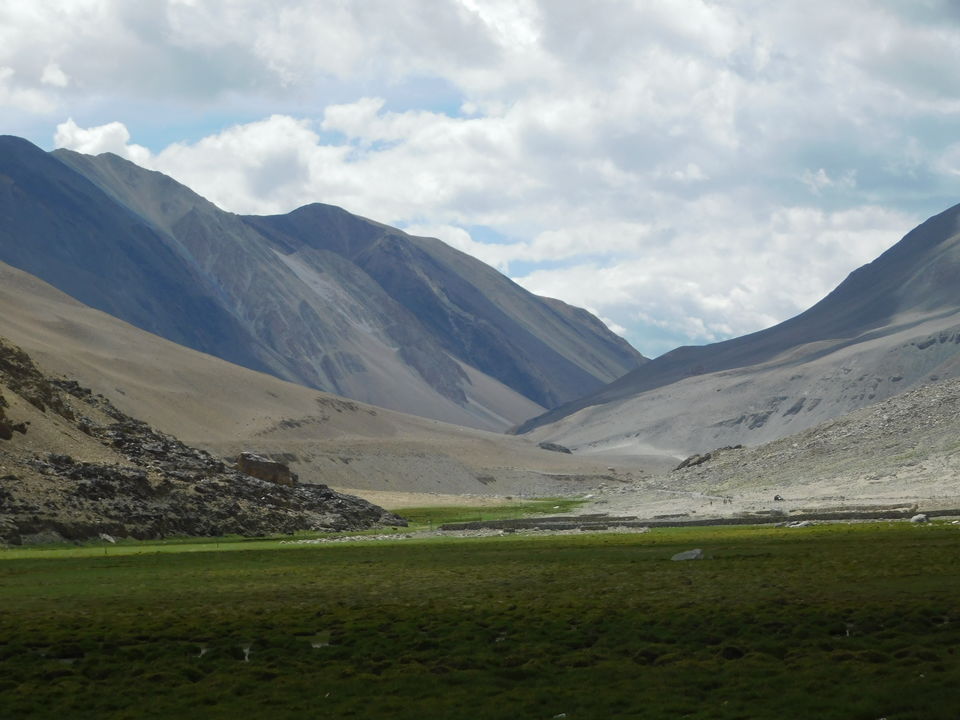 Guys, this is just the Interval. Picture Abhi Baki Hai (The Film Isn't Over Yet)...

And here it comes - Part 2 of the Ladakh Saga. Enjoyyy!! 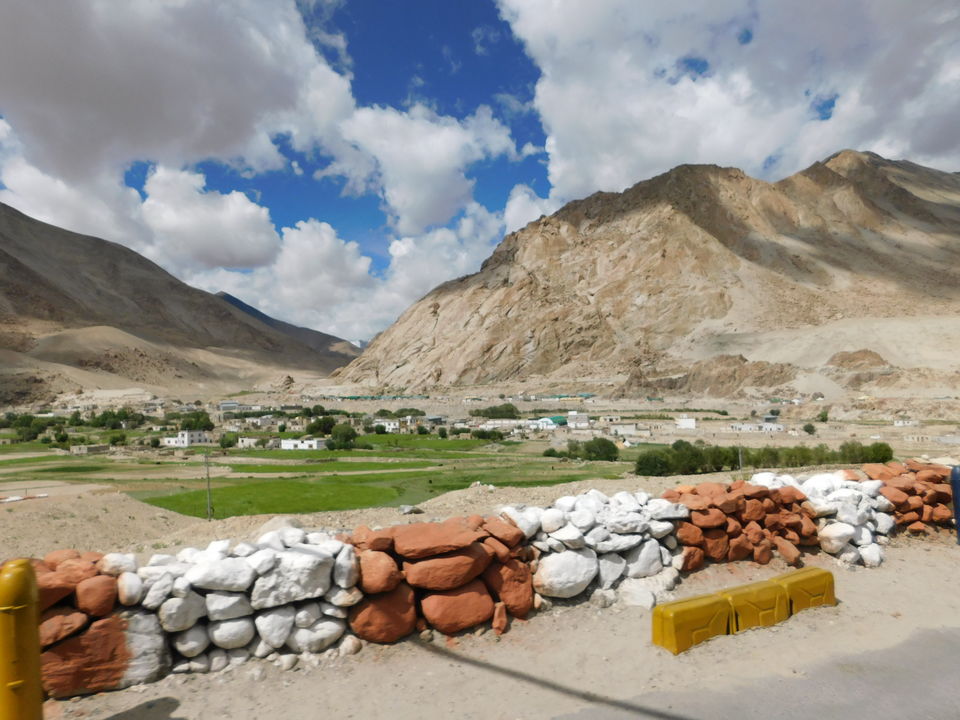 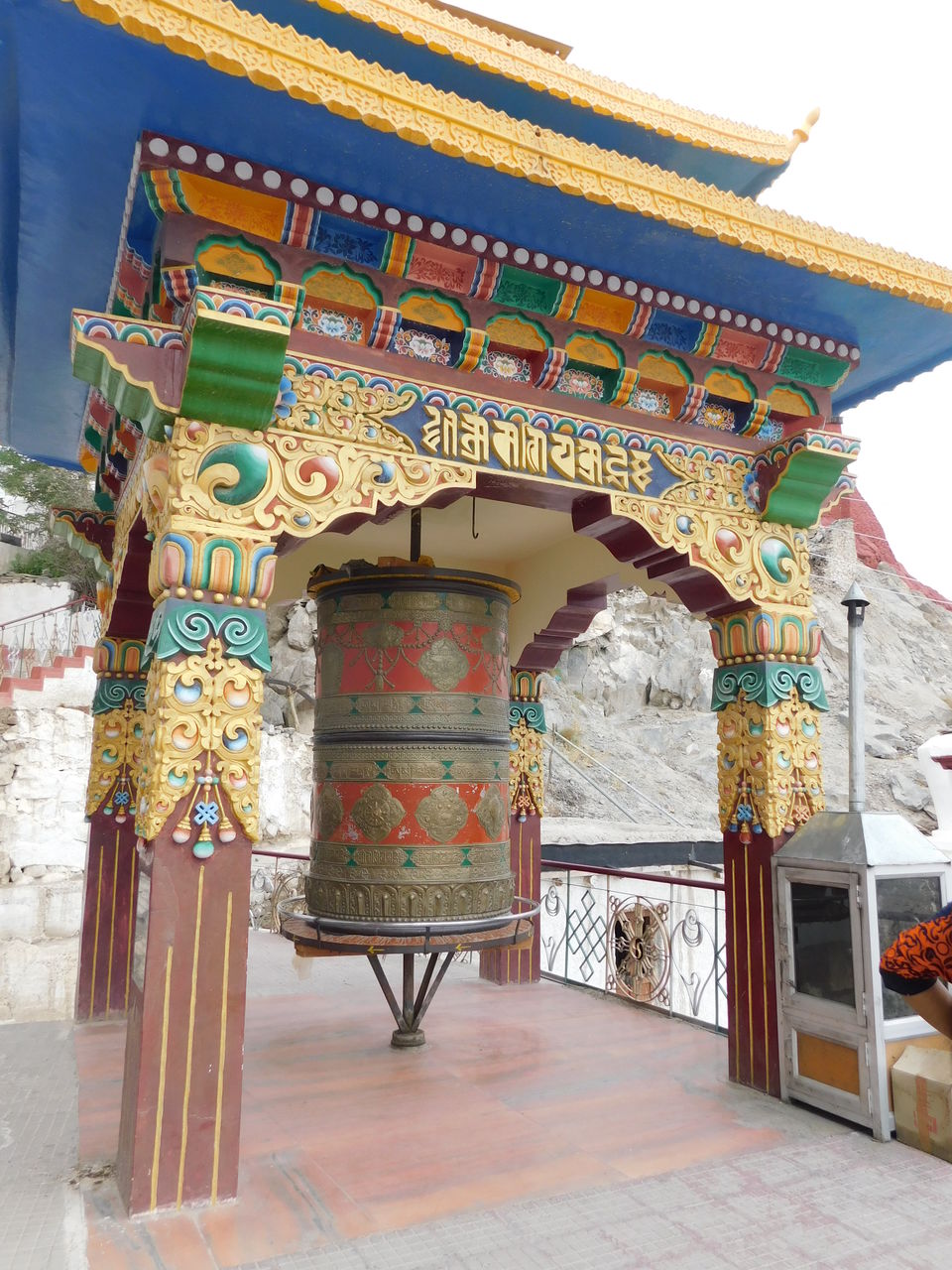 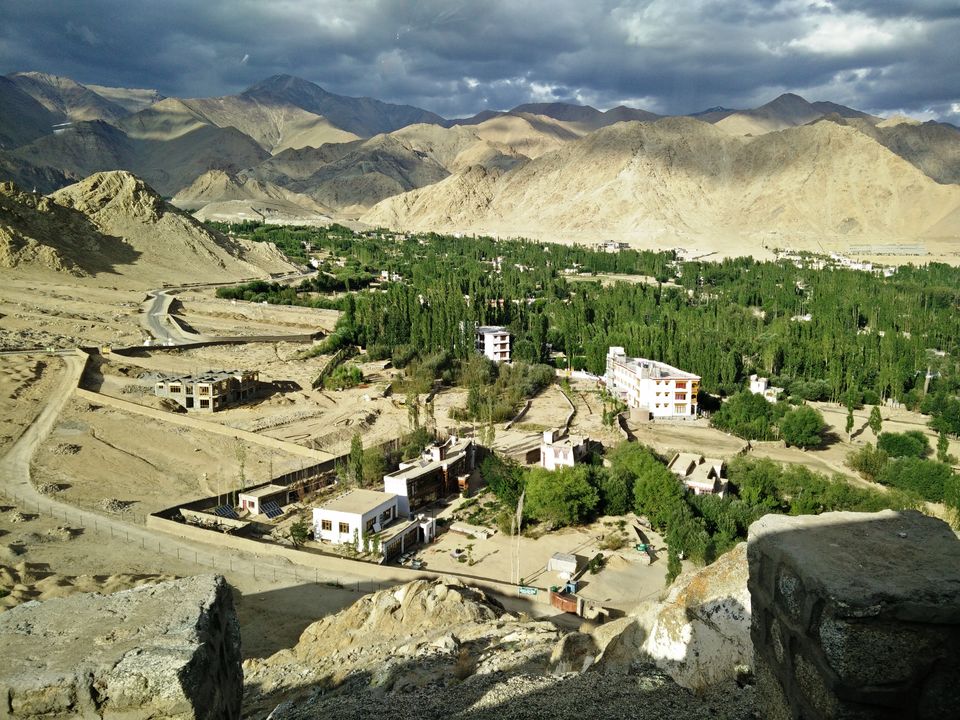