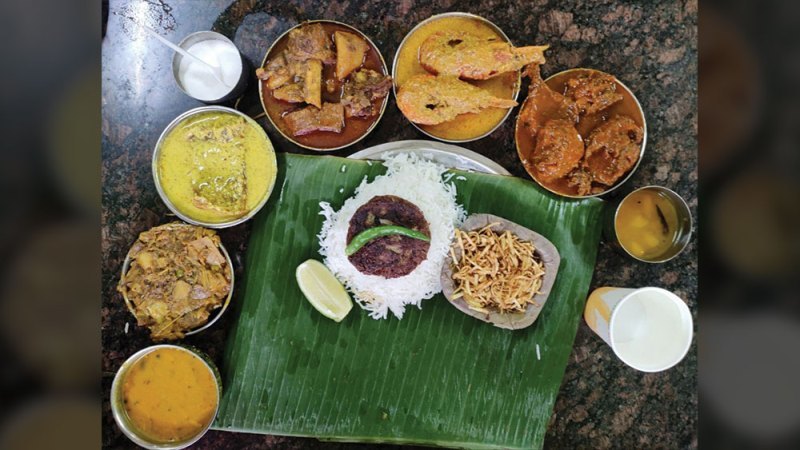 Authentic traditional food served in customary cutleries is a culture across Kolkata and more specifically Bengalis. For my international readers, Kolkata is the capital city of West Bengal; a state located in the eastern part of India. The city is phenomenal and renowned for hosting some of the finest local cuisines, restaurants, and StreetSide shops. In this article, I would be introducing a 100+ years old chain of hotels, known as Pice Hotels. The unique feature of Pice Hotels is the delectable food available at affordable prices. So forget luxurious restaurants, hop into these and enjoy the local delights of Kolkata. Recently the hotels have earned good recognition in BBC news.

Pice Hotels in Kolkata are located mostly in the narrow lanes of the city and is easy to miss them in your traveling route. But if you walk past them, you will be lured by the aromatic smell of the authentic Bengali dishes especially the fish meals. I am sure you will be easily drawn to investigate what's whiffing inside the lanes. And once you reach the hotels and glance at the menu, you are bound to order a sumptuous meal. But yes, do not expect a grand appearance as the hotels are quite old and the traditional look is preferable by the locals.

The name "Pice" is derived from the word "paisa". Paisa is a word in the Hindi language (the national language of India), meaning Indian rupee. The reason behind the name is attributed to its customary serving of meals at cheap prices. In the early 1900s, the city was flocked with numerous Pice hotels. The hotels remained crowded with migrant workers for their daily meals. Away from their family and missing the home-cooked meals, the hotels were a boon to them. The hotel owners and staff welcomed them, serving mouth-watering lips-smacking local dishes, all for a decent budget price.

The food at the hotels belongs to Bengali cuisine. Fish specialties like Shorshe Ilish (Hilsa fish cooked in mustard sauce), Chingri Macher Malai curry (prawn cooked in coconut milk), Bhetki Macher Paturi (Steamed Asian Sea Bass) are some of the common ones. There is a wide range of veg recipes served at the hotels. Alu posto (Potato prepared with poppy seed paste), kumro phool bhaja (pumpkin fritters), cholar dal (Bengal gram), Shukto (a bitter and pungent stew of vegetables cooked in mustard oil) are some of the most popular ones. The menu, however, varies with the availability of the vegetables in the market due to weather and seasonal fluctuations. The food is many a time served in banana leaf, a tradition followed from ancient times in Bengal. Now cutleries of stainless steel are used in many hotels.

In the earlier days, floor mats were spread across the hotel floors. Customers used to sit on the mats and food was served by the staff. The mats have now been replaced by tables and chairs. But the banana leaf still continues. The meals are still affordable and offered at cheap rates. They are priced at approximately INR 200 or USD 2. The menu is handwritten on a blackboard and displayed right at the entrance of the hotels for the guests to pick and choose. Migrant and local workers still visit the hotels for their daily meals. Furthermore, tourists from international countries and other states of India, love visiting Pice hotels and enjoy the recipes.

Hotel Mahal - Situated at Ramnath Majumdar Street in Kolkata. It was started in 1917 by Sandeep Dutta. The building was once a boarding house for students arriving at the city to study at the premier academic colleges and universities. Nandala Dutta, the grandfather of Sandeep Dutta, had started the boarding house. It was eventually converted into a restaurant and is known as one of the popular Pice Hotels in Kolkata.

Hotel Sidheshwari Ashram - Situated at Kolkata's Sir Stuart Hogg Market or New Market as it is popularly known. Initially, it was a boarding house for migrant workers in the early 1900s. In 1936, the place was opened to others especially during lunch hours as a full-fledged restaurant. Both light and heavy menus were included in the servings. The hotel is now run and owned by Ms. Riya Sen, the fourth generation of owners. The specialty of the hotel is Kobhiraji jhol (fish curry with vegetables), and aam shol machch, (fish prepared with a curry of tangy mango and mustard).

Tarun Niketan Hotel - Situated at a silent corner of Rashbehari junction in South Kolkata. It is 106-year-old and is quite famous for its plethora of fish delicacies. To date, it serves 15 different fish recipes. The prominent among them are bhetki paturi, chitol kosha (clown knife fish curry), iIlish macher jhol (hilsa fish cooked in mustard gravy), and fish-egg fritters. The current owner is Arun Dev, running the hotel for the last 42 years.

It'll be a delight to have a meal at these places!

With urban modernization, improvisation in lifestyle, and rise in prices of vegetables, fish, etc., it is now tough for the Pice Hotels owners to maintain the low prices of the dishes. Yet the passion and vigor are still existing that motivate them to continue with the tradition and authentic ambiance and the food delicacies. The hotels still experience a goof influx of customers, savoring the luscious dishes.

(This article has been inspired by a BBC Travel article, which you can find here)