SHANTINIKETAN - The land of Rabindranath Tagore 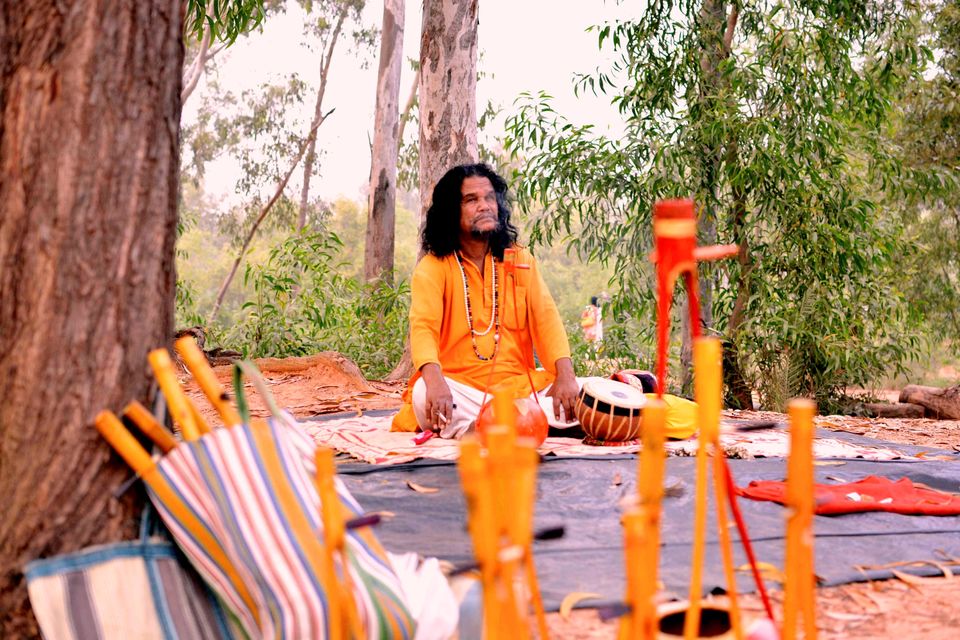 'Guru' means teacher or spiritual master and 'Dev' means lord. The two Sanskrit words when integrated into a single, it becomes 'GURUDEV'. This title is accorded to the greatest souls out of sheer respect. This blog is about one such Indian polymath and his heaven on earth. Enjoy!!

Gurudev Rabindranath Tagore, born in Calcutta (now Kolkata) as 'Robindronath Thakur' (1877-1941) is arguably one of the greatest of greats ever lived on this planet. In the field of poetry, literature, artwork and music, he was an absolute Bengali polymath and the first Asian Nobel laureate in Literature. In his lifetime, he met with many notable personalities (legends in their respective fields & visions) like Albert Einstein, Ezra Pound, Robert Bridges, Robert Frost, Mahatma Gandhi, Thomas Mann, George Bernard Shaw, H.G. Wells, Subhas Chandra Bose, Roman Rolland, and more. Everyone is well aware of the fact that our as well as Bangladesh's National Anthem is written by Rabindranath Tagore but the actual trivia lies with the name of the writer of Sri Lanka's National Anthem. Yes, the name of the writer is Gurudev Rabindranath Tagore. All the three Anthems were written in Bengali which was later translated in to Hindi and Sinhala for India & Sri Lanka) respectively.

Rabindranath Tagore's work is spread all over Shantiniketan (his heaven on earth) which turns the whole town in to a tourist attraction.

Debendranath Tagore, father of Nobel laureate Rabindranath Tagore founded an ashram in Shantiniketan in 1863 where the writer of 'gitanjali' used to meditate in his childhood days. Father of Rabindranath Tagore has visions to have a place where people exists in perfect harmony with nature. So to give direction to his vision, he started an open air school where students used to study sitting under trees and surprisingly this method is followed till date. The teachers sit on raised blocks of stone or pillars and the students sit, forming semi circles on cement blocks opposite to their respective gurus. Viswa-Bharati started with just 20 acre of land gifted by a zamindaar of Shantiniketan out of respect and today it is spread over more than 1000 acre.

Baul (a folk singer of Bengal) 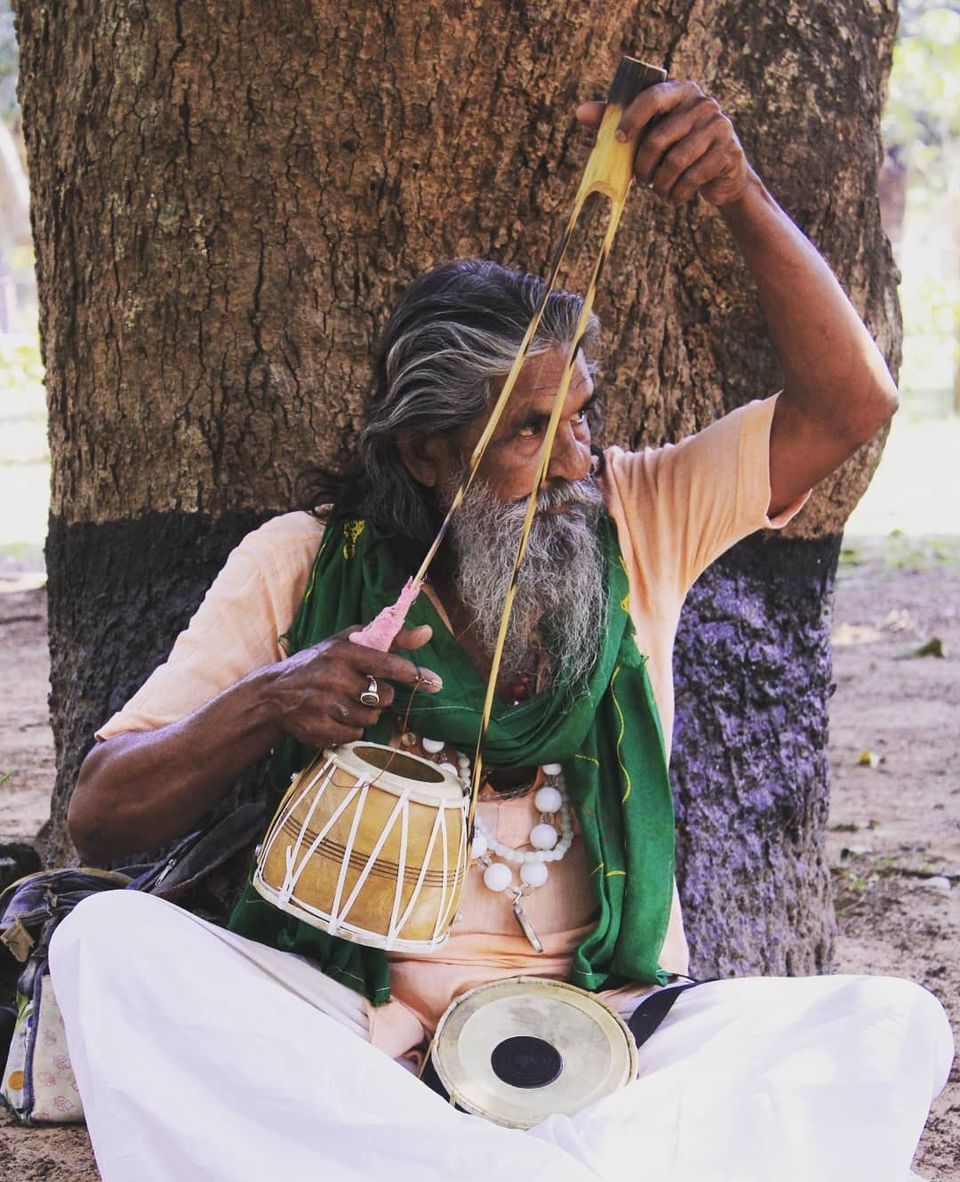 Visva-Bharati University with Prime Ministers as it's Vice-Chancellors, in the heart of Shantiniketan grew to become one of India's most renowned places for learning with a list of alumni that includes Amartya Sen (Nobel winning Economist), Satyajit Ray (Oscar winning Director), former queen of Jaipur, Gayatri Devi to name just a few. University campus includes school, departments, institutes, centers, etc. University have 25 language institutes to be exact where 25 different international languages are being taught in addition with many other institutes for learning philosophy, art, dancing, singing, pottery and many more to add. 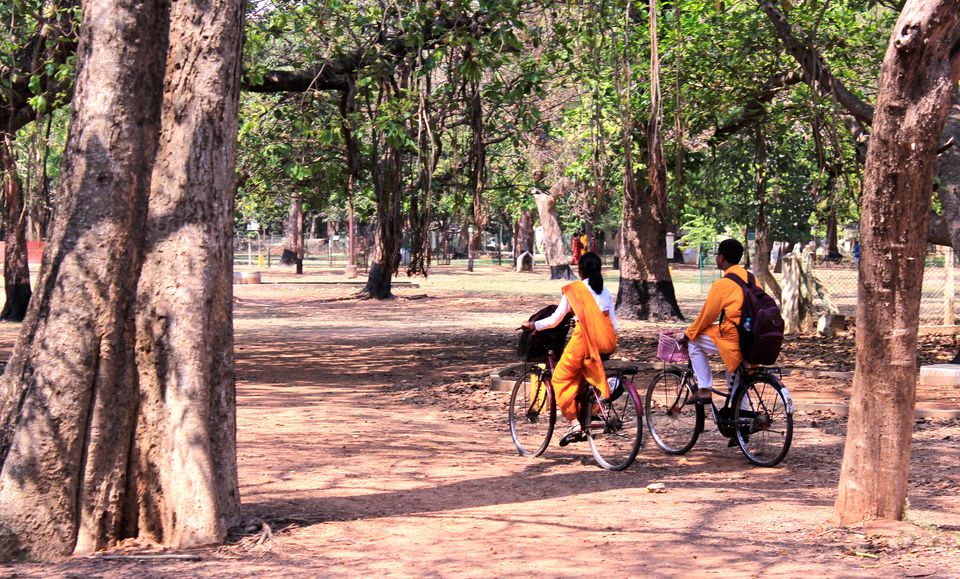 School students look elegantly beautiful in their school attire which is 'kurta-pajama' for boys & 'sari' for girls (class 9-12). Utmost priority is always given to discipline and respect towards everyone, inside the university.

No one can complete the tour across the campus in a single day as time limits are there for tourists to ensure no disturbance leads to hinder the education of students inside the campus. But there are few must visit places in university campus which cannot be missed in any case.

This is a serene open space where Debendranath Tagore used to meditate in his initial days. This is the spot which is led to the origin of a great school , Patha Bhavan by Rabindranath Tagore. 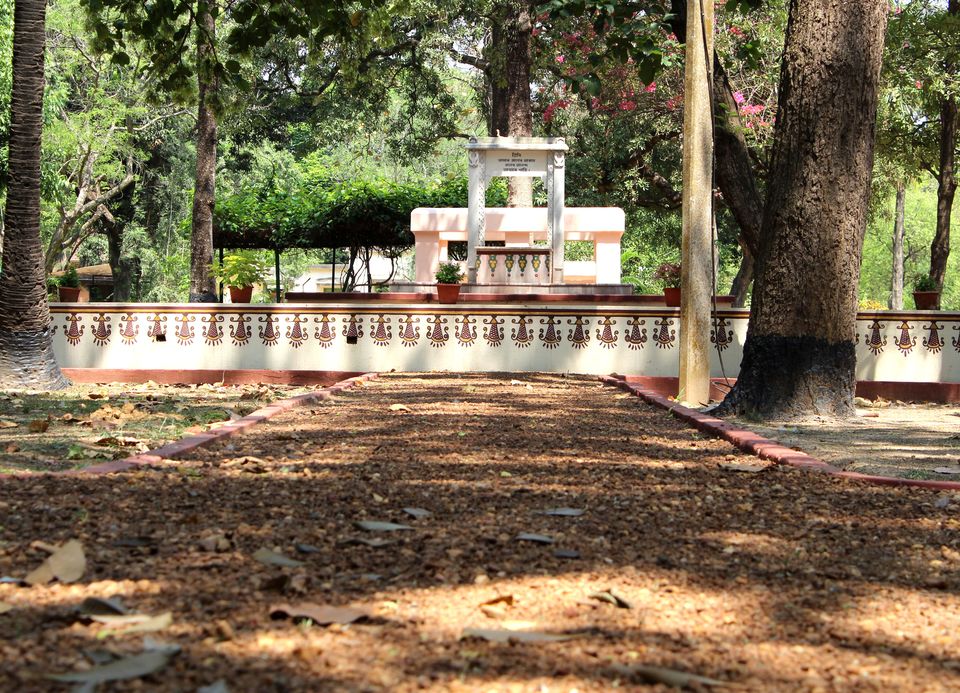 One of the most magnificent hall in Shantiniketan is 'Upasana Griha' founded by the father of the poet. This hall was built around 1863 with multi-colored Belgium glass and marble steps on all the four sides. Prayer is held on every Wednesday and everyone is welcomed from any religion with the dress code as sari for girls and kurta-pajama for boys. 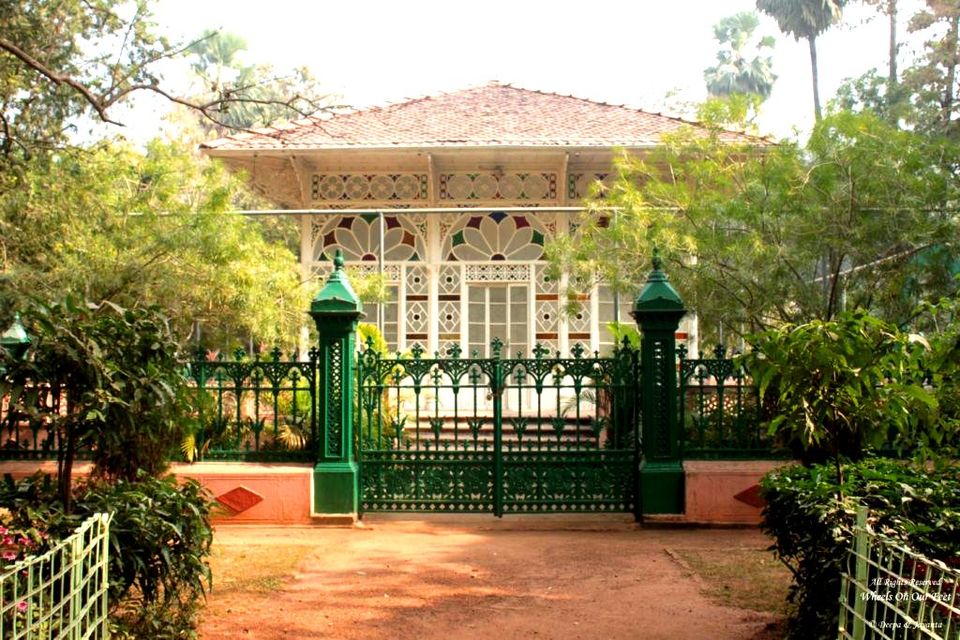 The school is spread over much area and in summer as well as winter days students study sitting uopn cement blocks on the ground. The vision of Tagore was not to block the creativity and thinking ability of students inside the four walls of a classroom. In rainy season, they continue there studies in regular classrooms inside the school building. 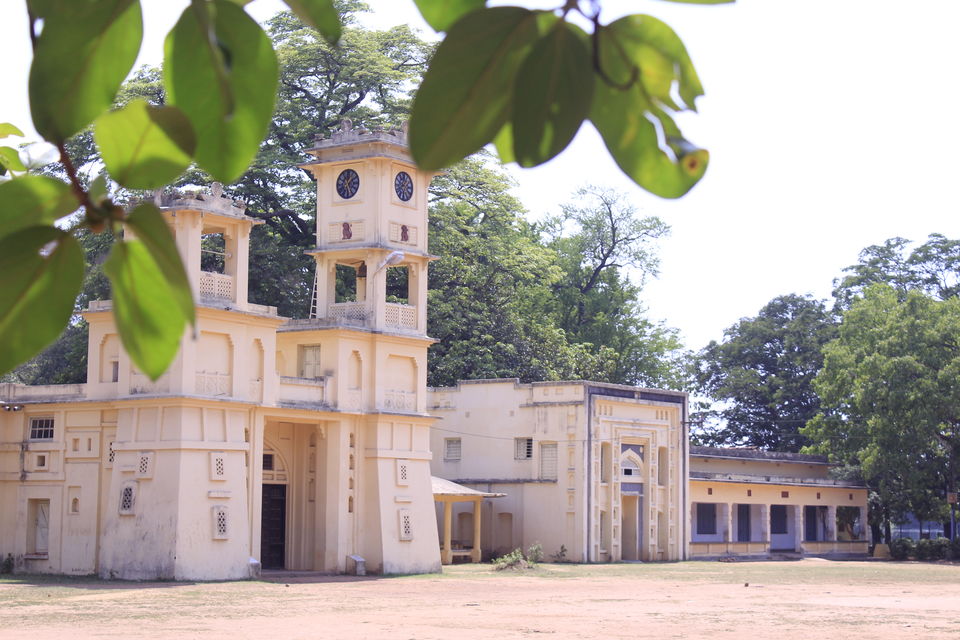 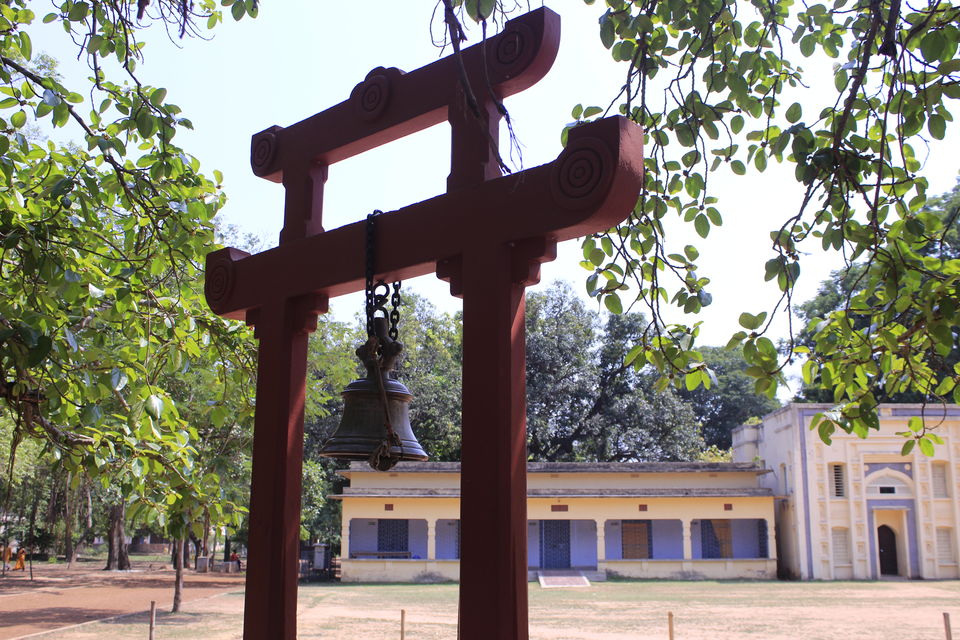 Kala Bhavan is a noted institution of education and research in fine arts. This would be the most interesting site inside the university campus. Though visitors are not allowed inside the building but you'll get the chance to witness mesmerizing paintings on the walls and sculptures scattered around the ground near bhavan. 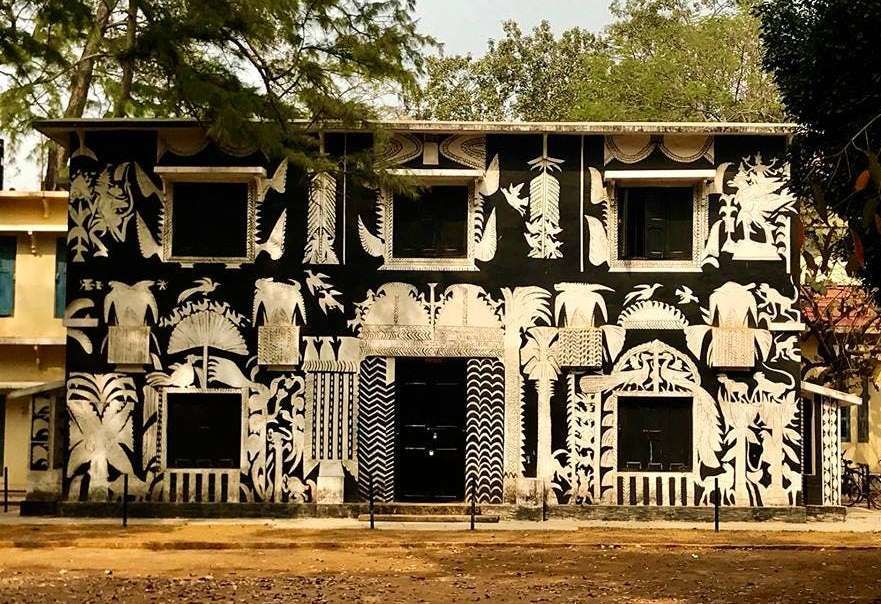 A Sculptor sculpturing a sculpture 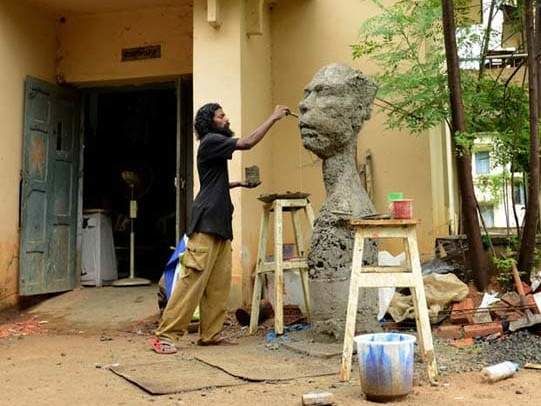 another view of Kala Bhavan 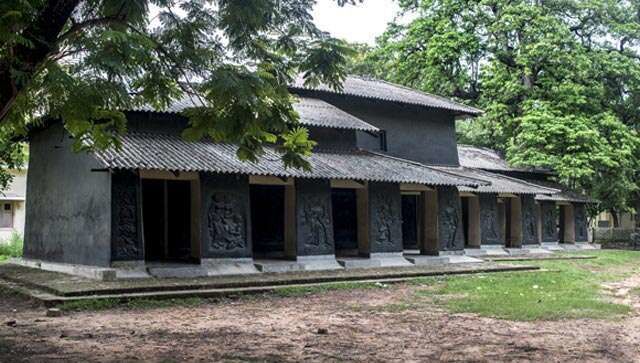 Institute of education and research for Chinese studies which is one of the 25 foreign language institutions in the University. 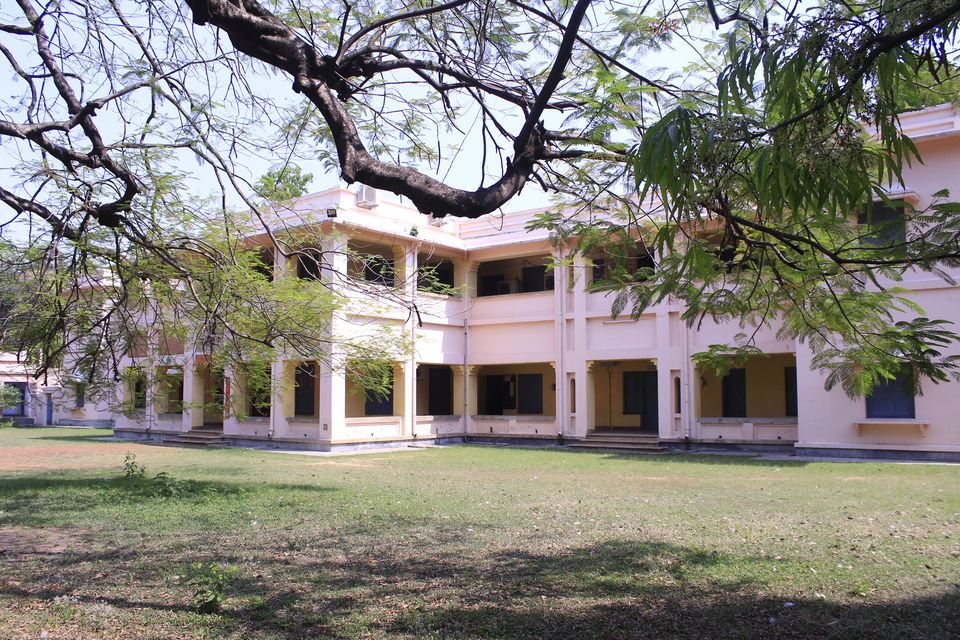 Now let's step out of the campus to see what inspired Rabindranath Tagore to become the one. There are many such places in and around Shantiniketan which let the place spread it's fragrance out of the town.

At the age of 10 or 11, we usually fight with siblings to have our favorite television channel run so that we can just go to sleep peacefully. At the very same age, gurudev used to regularly visit Kopai river and observe how in rainy seasons, the narrow river flows in gentle loops and in the summer months, cart and cattle could travel across the river with ease as the depth become shallow. While observing such instances, he wrote a famous poem- "Amader Choto Nodi" (our little river). 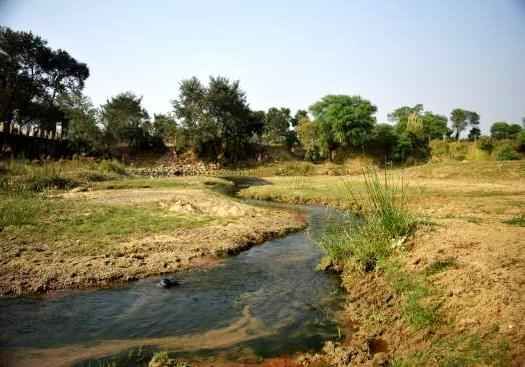 This local market is so popular in Shantiniketan that people from nearby town and even from Kolkata visits every Saturday. This once a week (just Saturday) market starts in the early morning and continues till sun goes off for the night. Just wish for any folk culture packed item and you'll get it in this market. 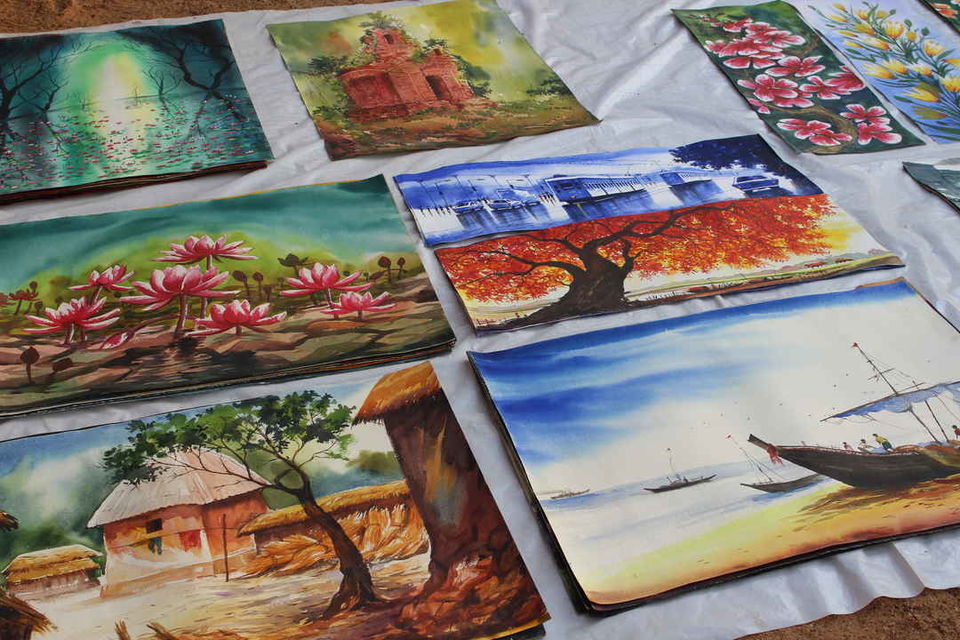 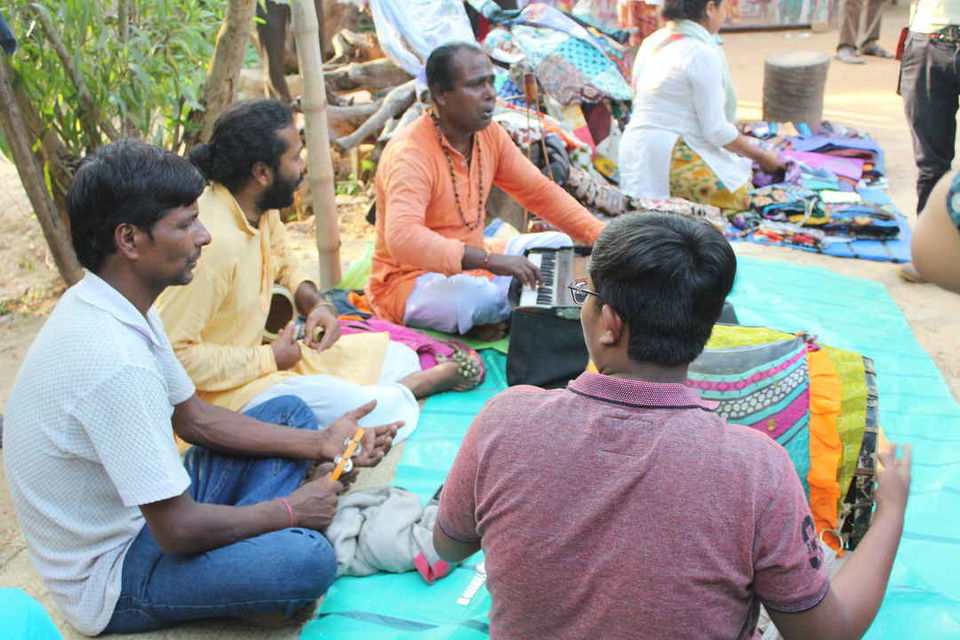 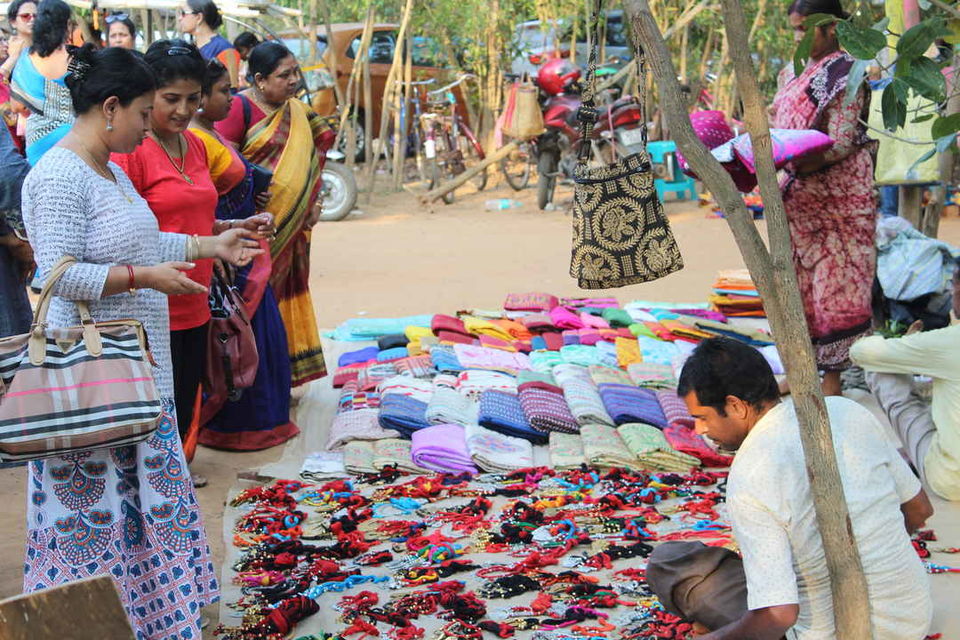 From famous Indian folk instrument 'Ektara' to best quality ethnic wears (saree, blouse, kurta, payjama, etc), from beautiful flowers to jewellery made of fruit seeds, everything for which Bnegali culture and it's creativity is known are available here. You'll get to notice even Visva-Bharati University students selling there sketches, mud dolls, prints in this market. 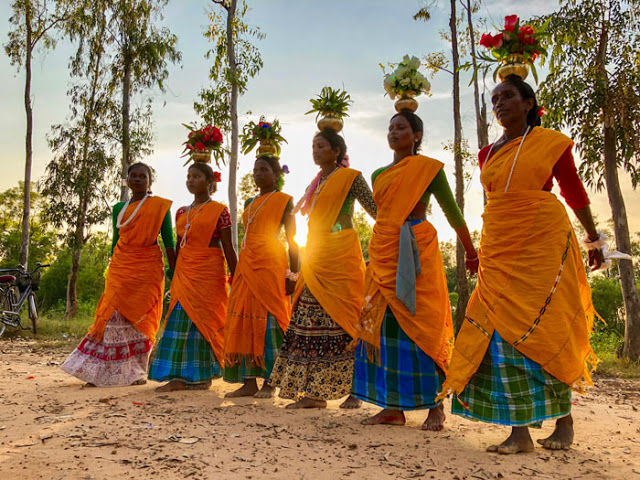 Tribal groups for neighboring villages comes there for performing folk dances to give pleasing enjoyment to visitors in return of loud claps and minimum donations. Overall, never seen before experience what you can expect from the market.

Museum exactly opposite to the 2nd gate of Visva-Bharati University is all about Rabindranath Tagore's contribution towards society along with household items used by Tagore family. A Tagore family's generation tree is framed on wall along with letters & priceless gifts presented to him by renowned faces of 20th century. A miniature railway coach model is showcased in which ailing Tagore traveled for the very last time from Shantiniketan to Calcutta for treatment. 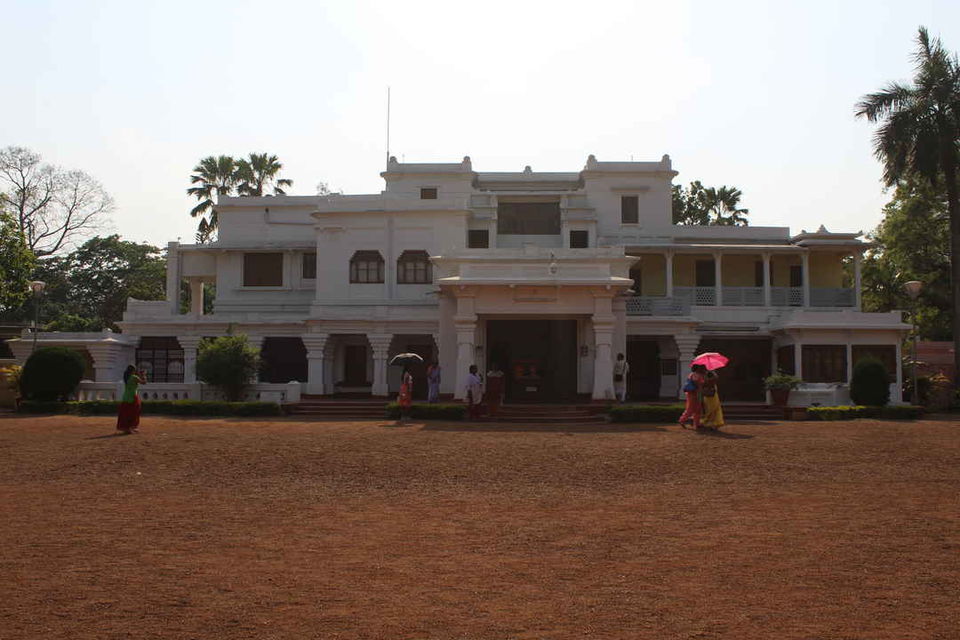 The darkest day for those who worships gurudev Tagore also lies with this museum. The Nobel which was awarded to Rabindranath Tagore (for his collection, Gitanjali) got stolen from the museum premises in spite of tight security. At present a replica is being kept in place of the original Nobel prize he had been awarded with. Till date it remained a mystery on how it was stolen. 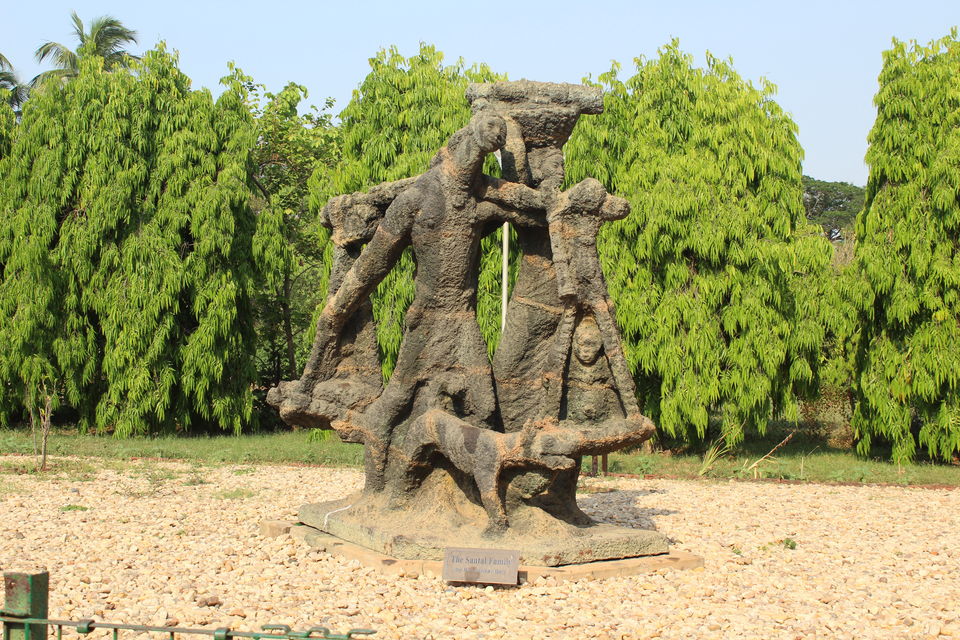 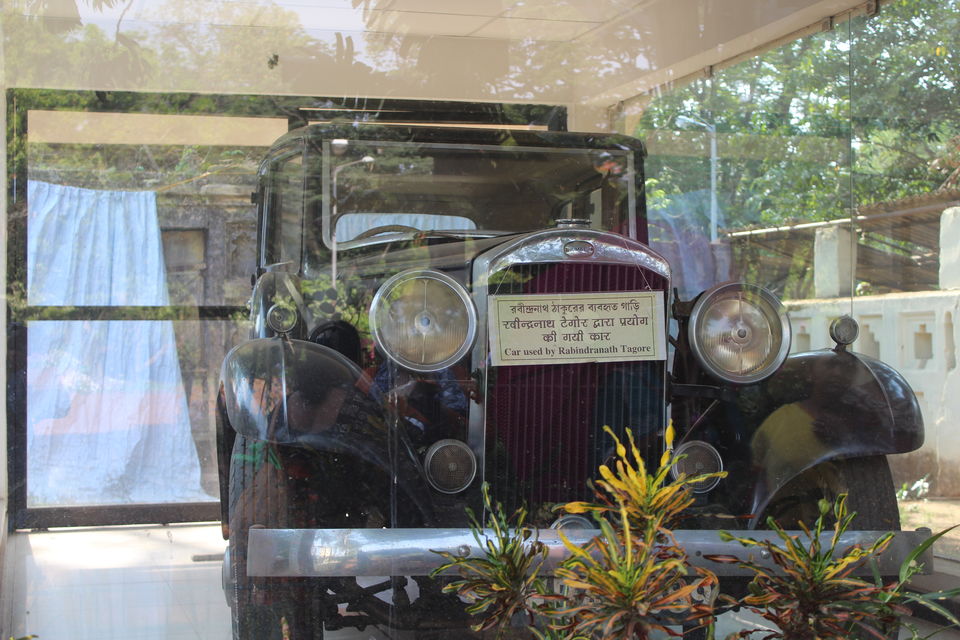 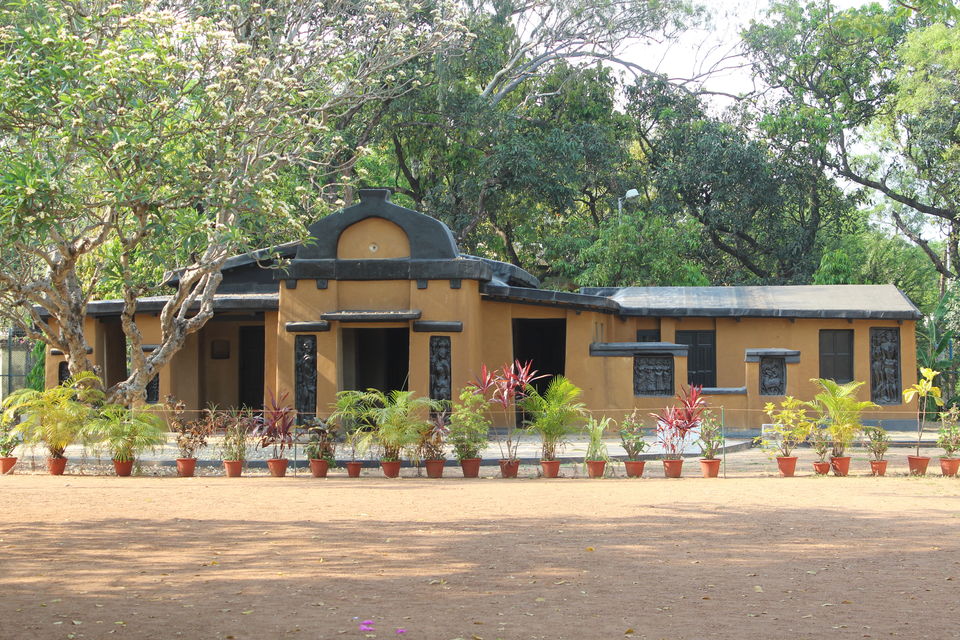 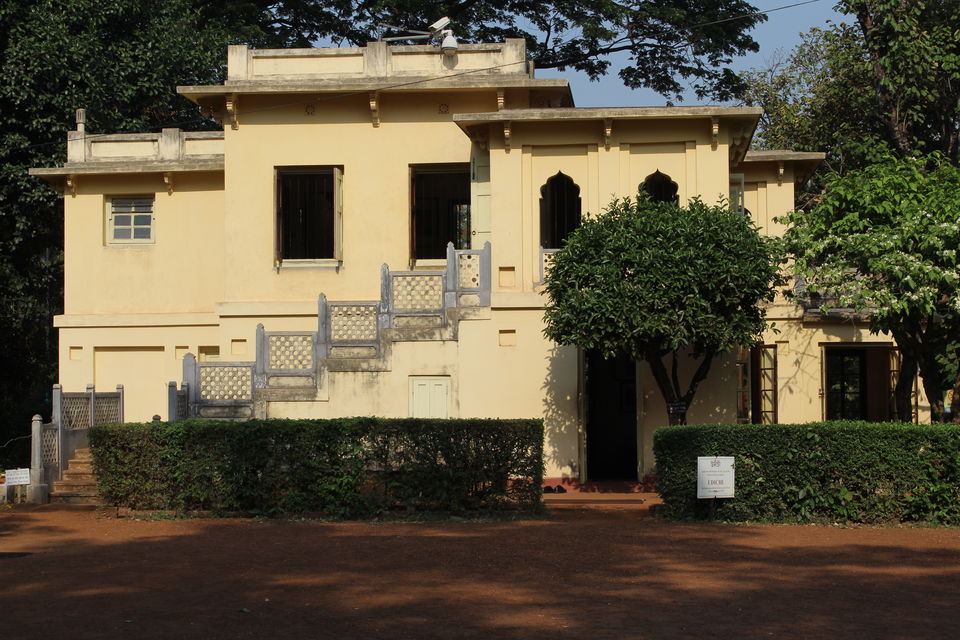 In the premises, there are lot to see alongside the museum like Tagore's favorite car is showcased which is an absolute classic, Rabindranath Tagore's oldest son's house and 2 more houses which were built in the premises for Tagoe so that he could write peacefully. Multiple houses were built for him so that he can adore the beauty of nature in his last few years.

Overall, Shantiniketan is next to heaven for poets, writers, painters & creative artists and for others it's a peaceful place where nature can be enjoyed with the flavor of cultural aspects.