Krabi Travel GuideKrabi TripsSwimming With A Million Stars Underwater, On My Birthday Eve.

Swimming with a million stars underwater, on my birthday eve.

That’s me, ready for the first snorkelling round in the Marine park waters in Krabi, Thailand 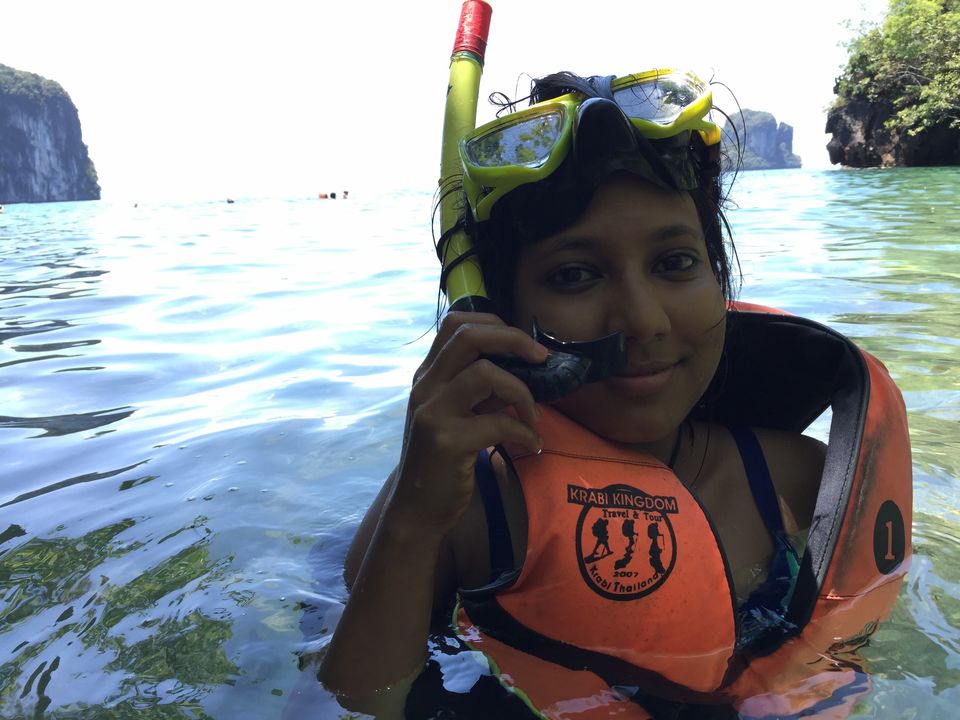 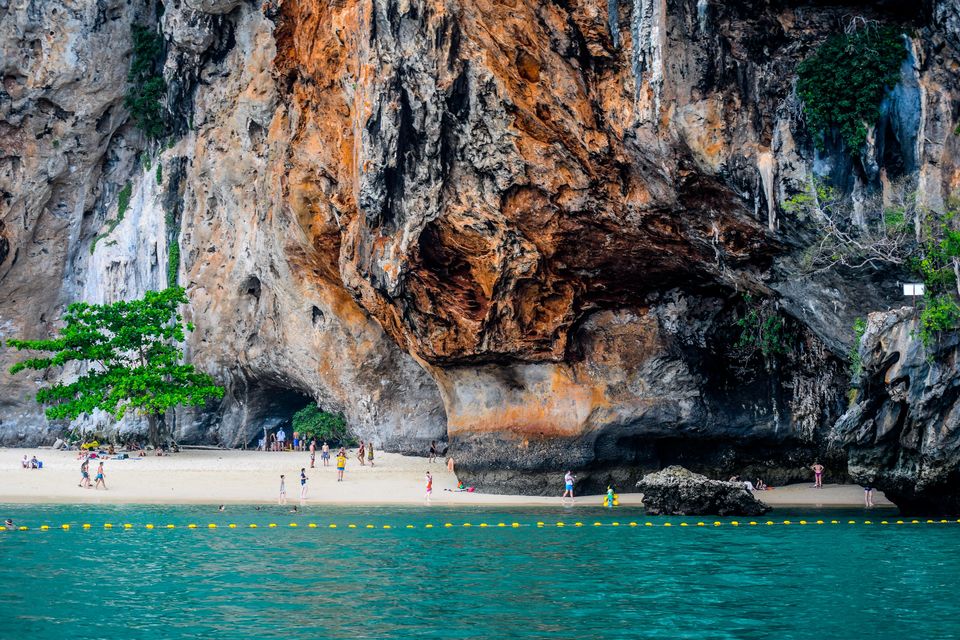 We make bucket lists as we grow, and like a machine we work towards fulfilling those predestined fantasies that we have made for ourselves.

Shouldn’t the process be reversed? That we go out in the www (wide wild world) and do things that we can put in a glorious list of the most memorable things we have done in our life.

I never made a bucket list because I didn’t want my life to be dictated by inspiring stories that other men have experienced for themselves. No must-do-items-in-my-bucket-list like bungee jumping, eiffel tower honeymoon for me.

When you don’t have a bucket list, life gives you much more than you could have desired for yourself. It’s exhilarating just because you never planned it in the first hand.

In my travel to Thailand, many such experiences stumbled on my path that I would have never even dreamt of cooking up in any bucket list for myself.

Swimming in an island where the waters were teeming with bioluminescent phytoplankton.

I don’t know what good I have done in my life to have experienced such a heavenly thing. I never even thought such a thing existed beyond the reach of movies. The co-incidence was mind blowing. As we browsed some routine brochures for famous island hopping trips in Krabi, I suggested my friend that we check out all the agent shops in Krabi Town just so we could find the cheapest deal. As always it turned to be the best choice, because as I leafed the pages, I saw the words, BIOLUMINESCENT PLANKTON. And I remembered a Bollywood movie where the hero will take the heroine to such a beach, and would etch a glowing ember-like heart for her(eyes rolling.) I jumped and immediately booked that tour, called the “Sunset 7-island snorkelling tour” only for 700 Baht per head(which was way cheaper than what was cited in online aggregators). Booking with a direct agent is always cheaper.

The trip started out in the afternoon, from the Ao-Nang beach pier, after picking out about 20 other guests from their hotel rooms.

The long tail motor boat went along the Railay beach route, to the four island cluster that include Chicken Island(named so because it looks like a chicken head, seriously!), Tup Island, Poda island, and Phra-Nang Bay.

A long tail boat in the water.&nbsp; 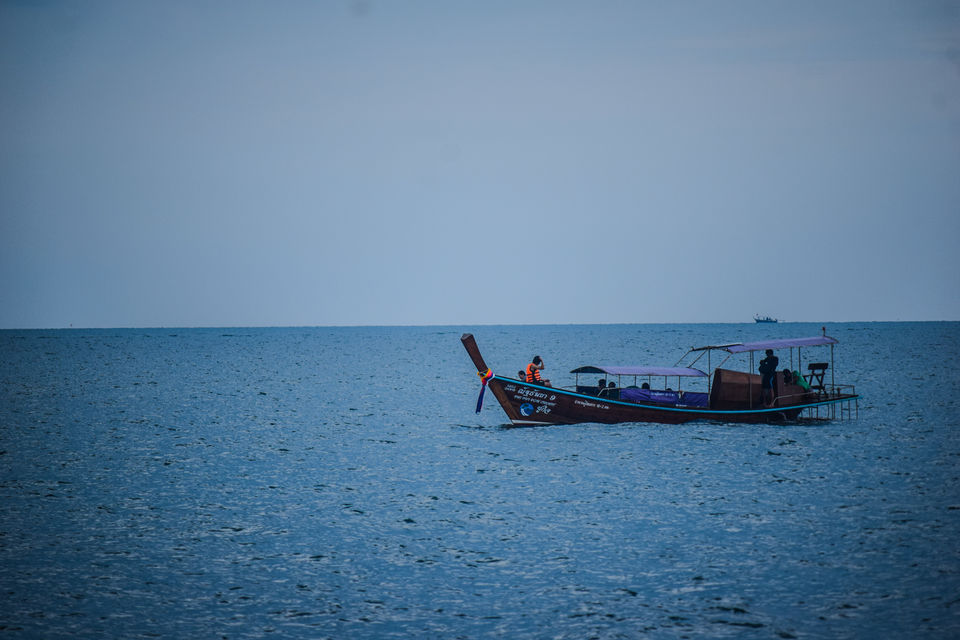 We were first taken to snorkel in a limestone island just next to Chicken island. It was mind blowing. There were colourful school of fishes swimming near me, and amazing coral pagodas in hues of yellow, blue, red. I saw some sea creatures that I had no clue about, they are a mystery to me even now. I would have gone on and on about it, had I not seen the bioluminescent snorkelling that night.

Next we were taken to the strip connecting Tup and Chicken island that is visible during low-tide. We swam in the blue waters there, and then headed off to another snorkelling round in Poda island. All these took the entire afternoon, around 4 hours. We were very hungry and were taken off to Railay East beach to gorge on barbecue arranged by the tour itself. We saw a fire show and then returned back for the highlight of the day for me.

The engine suddenly stopped near a nondescript island, and in anticipation I feared that we may not reach the snorkelling spot. After all, I could not see any glowing things in the water there. The guide announced our arrival, and I was disappointed that we had been thugged by false promises of glowing fishes in water. The guide took a bucket of water from the sea, and disturbed the water and then I saw the magic, the movement by his hand making the water glow blue-green like tiny fireflies. I do not know swimming, but against my self-preservation I jumped into the water first, when he announced that the ones interested could go for snorkeling, but were not to stray far from the boat.

I jumped, and on my first jump I witnessed something that I could never have believed I will witness for myself in this life. As I swam (waddled my limbs like people who do not know how to swim but bravely go to water with a life jacket do), the water glowed with every disturbance I made. It was like I was on LSD or marijuana. I resurfaced and shouted to everyone, “It’s awesome and crazy, you must do this.”

I called my friend loudly, and soon he jumped too after wearing his snorkel mask. There was no light in the boat, so that the ones safe in the boat could enjoy the glow that the swimmers produced underwater. I found my friend Rohith underwater through the light he was producing with his limbs. I held his hand tightly, and I don’t know when I have been so happy in my life to have shared an experience with someone together. We made circles of glowing light with our hands, we made stars, spirals, and I tried making an underwater glowing heart too, it was the most beautiful shape ever. We enjoyed so much that we strayed far from the boat. I didn’t care. I was going crazy with my body trying to make strange lights under water.

It was like I am the universe herself, creating millions of stars with my desire. These millions of stars were tiny plankton lives. I suddenly felt the strangest happiness to be alive and be part of nature that never ceases, such miraculous beauty.

Soon, I felt my friend pulling me up from my universe. The boat people were searching for us frantically with torches, but since we had drifted along the bow of the boat, they could not see us in their line of search. My friend panicked, and shouted back, “HERE..” Soon, we were rescued with a long rope, and I climbed up, wet and grinning.

I do not have a picture of this star filled night, because I didn’t have the kind of camera that could capture pictures underwater, in absence of any light.

That night was my 26th birthday, and countries away from my family, friends, without any cake blowing or gifts or birthday selfies, I was the happiest 26-year-old alive. I didn’t need anything more. I had experienced the most beautiful surprise gift my life could have stumbled upon.