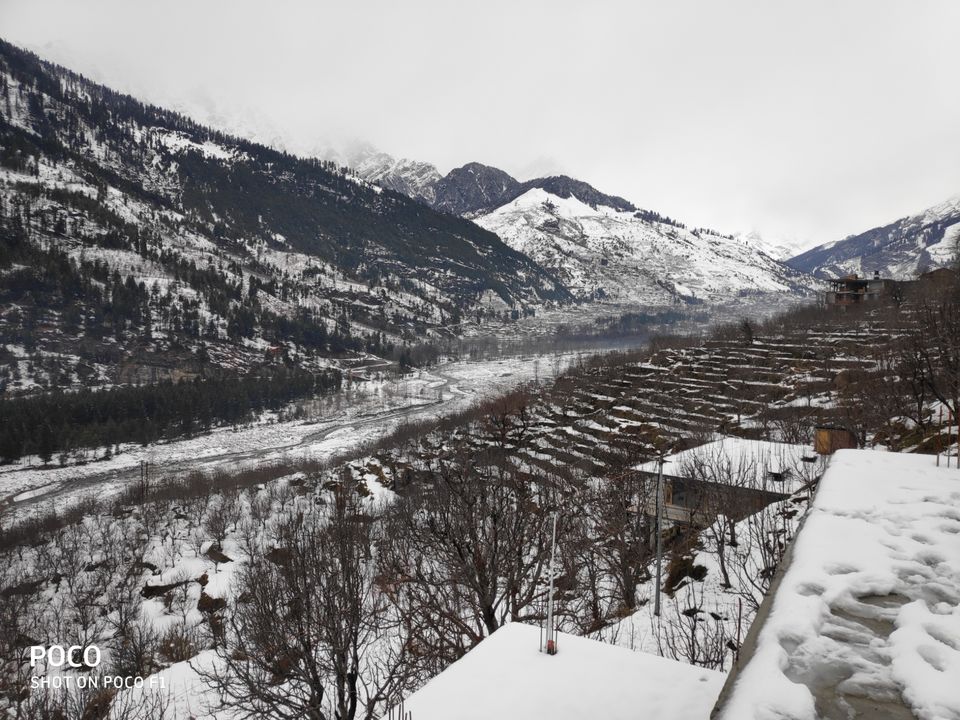 Two friend watching "ye jawani hai diwani" on a Thursday evening with a long weekend coming their way, a perfect plot for a Manali trip. That how exactly we decided to leave for Manali on that Thursday night. Yeah, I may sound crazy but that's how our plans are made.

Us taking a HRTC ordinary bus to Manali from Kashmiri Gate were in Kullu by the morning. Unfortunately(or fortunately) due to snowfall in Kullu in past few days the bridge was closed and the only way to reach Manali was to take a bus from other side of the bridge crossing the bridge on foot. We sat in a local bus going towards Manali which started after a half hour wait. But, when the bus was about to leave there comes a girl brown hair, grey eyes and mark covering her face. The first two things that came in my mind was yeah, love at first sight exists and this girl is out of my league. Well, I don't remember how, but we started talking and talked continuously for the whole 1 hour journey between Kullu to Manali. This was the first time in the whole journey I wanted the bus to move slow despite being late in our plan. Oh, I forget to mention about the spectacular views you see when travelling along the beas river that will never leave your side once you enter Himachal. The journey itself is a treat to watch. Well, now we were on the Manali bus stand and I was disappointed that it was time to say goodbye to Neelam but no, Neelam offered us to join her in city sightseeing and how could I disagree to her (also due to bus being late and change at kullu half our day was gone). So we visited Hidimba Devi temple, it is situated in old Manali in a pine forest and you need to do a small but beautiful walk to reach the temple and walking here gets really tricky due to snow all around your feet. Coming to Hidimba Devi temple it was a beautiful temple in the middle of a forest covered with snow all around which will definately give the peace which you won't get living in a suburb. By the time we left from Hidimba Devi temple it was already late so we decided to say goodbye to Neelam with beautiful memories and left for the oyo hotel we had booked. One thing about hills the day ends quite suddenly and you won't realise how quickly it gets dark. Late in the evening, we decided to make a visit to the famous mall road of Manali. Mall road has its own beauty at night and a paradise for shopaholic people but the only supplies that we needed from mall road was rum, a essential supply to deal with negative temperatue of Manali. That was our super exciting day 1 in manali. 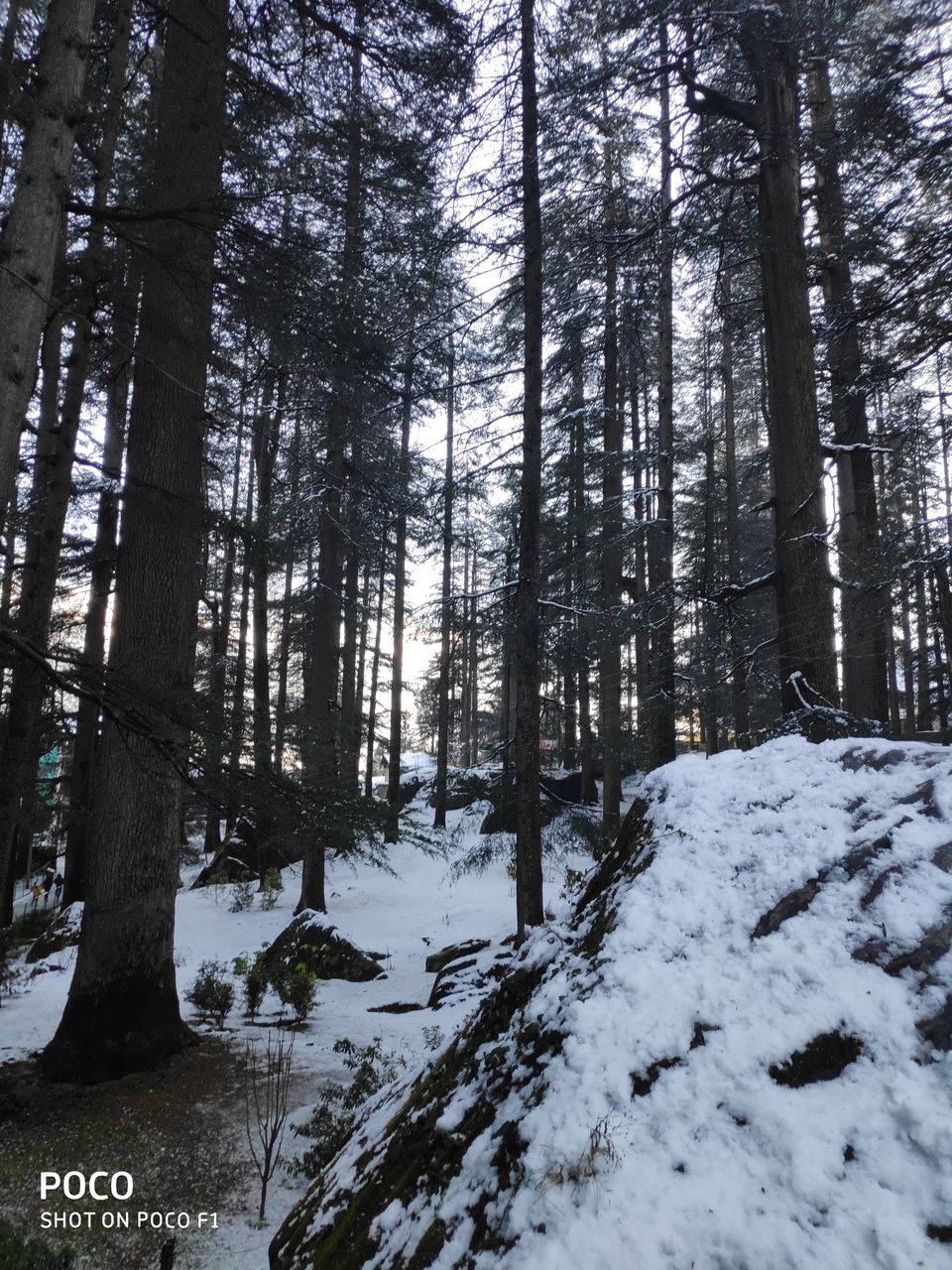 First encounter with snow brings out the child in us???? 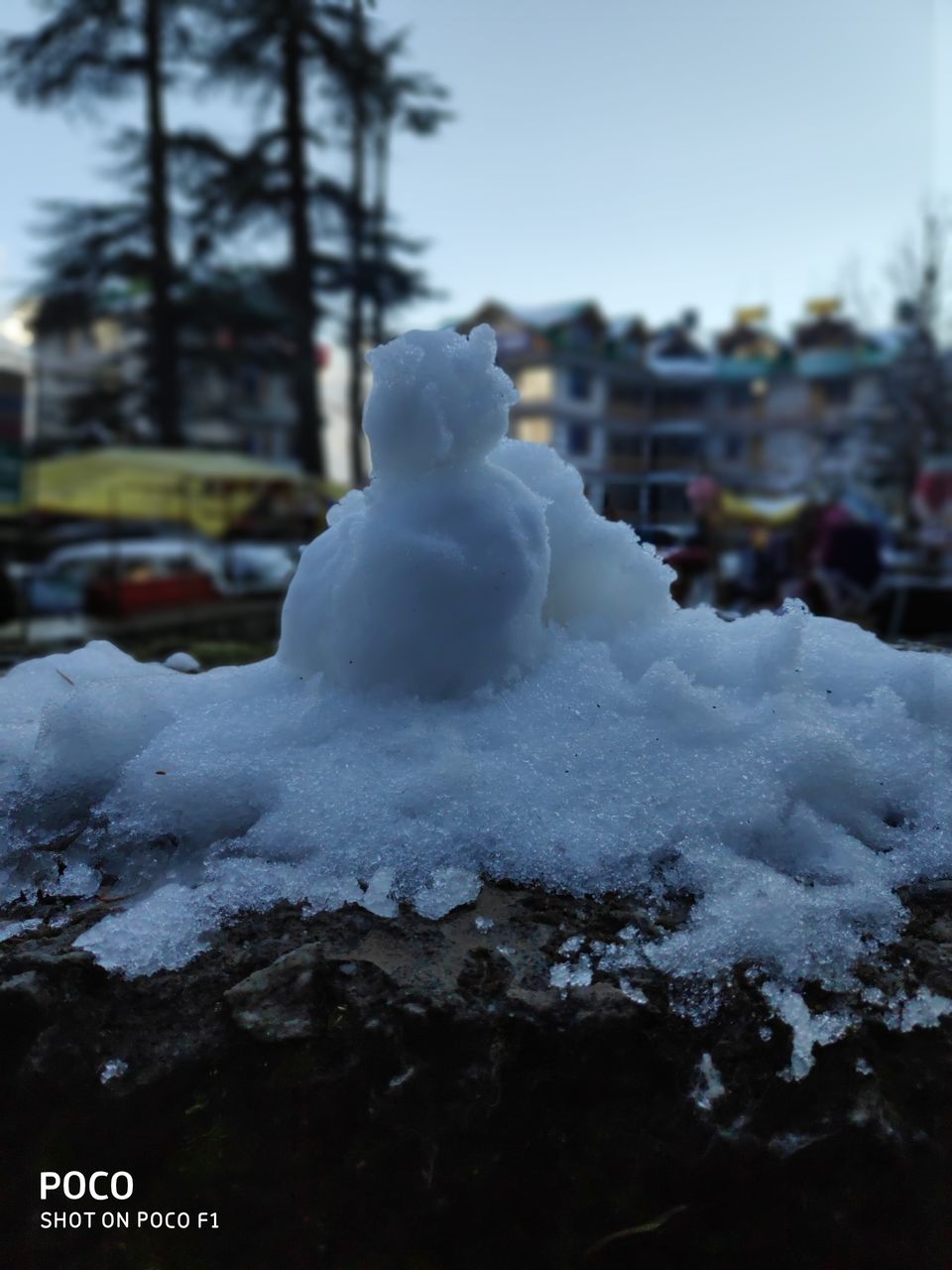 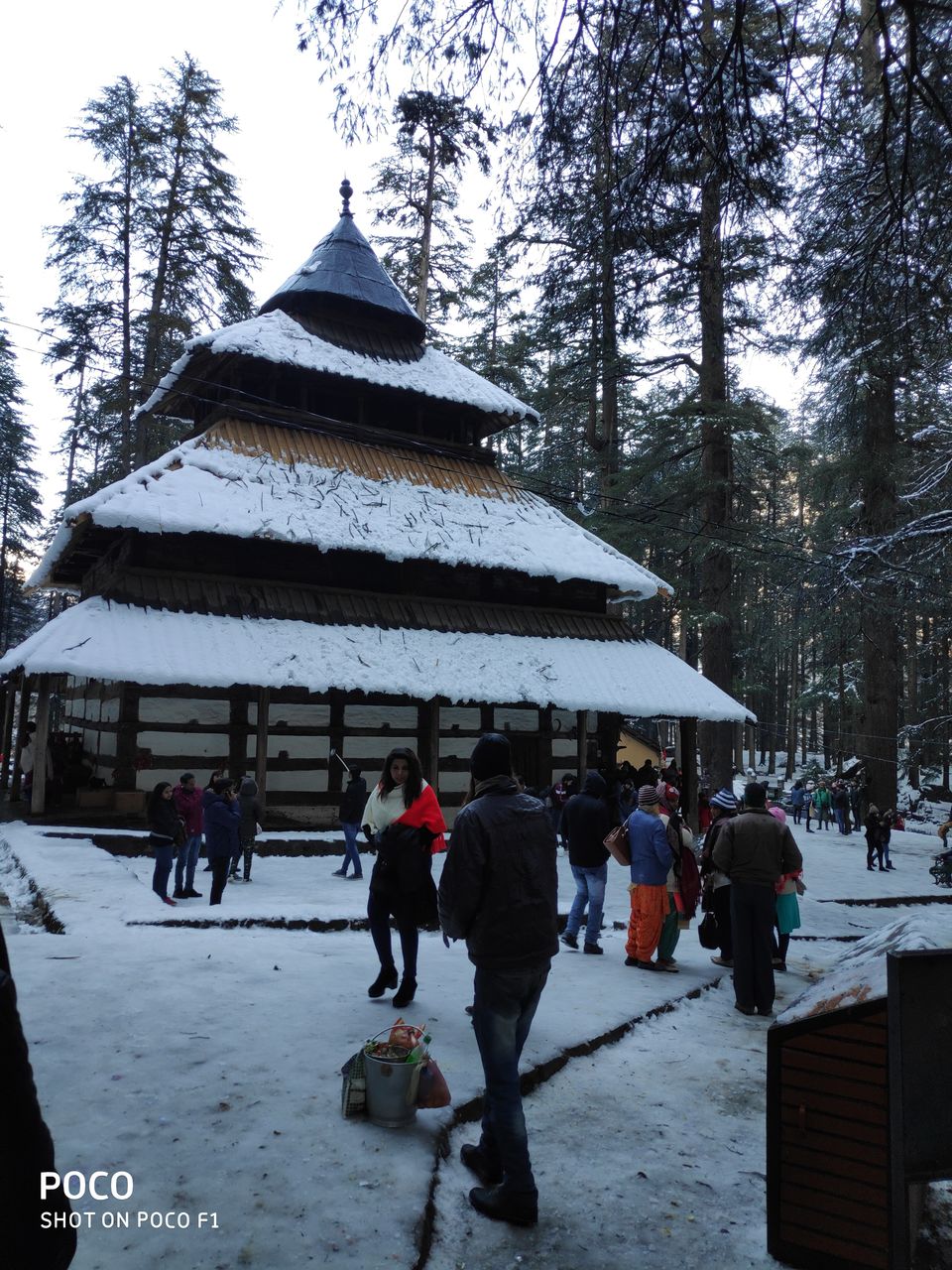 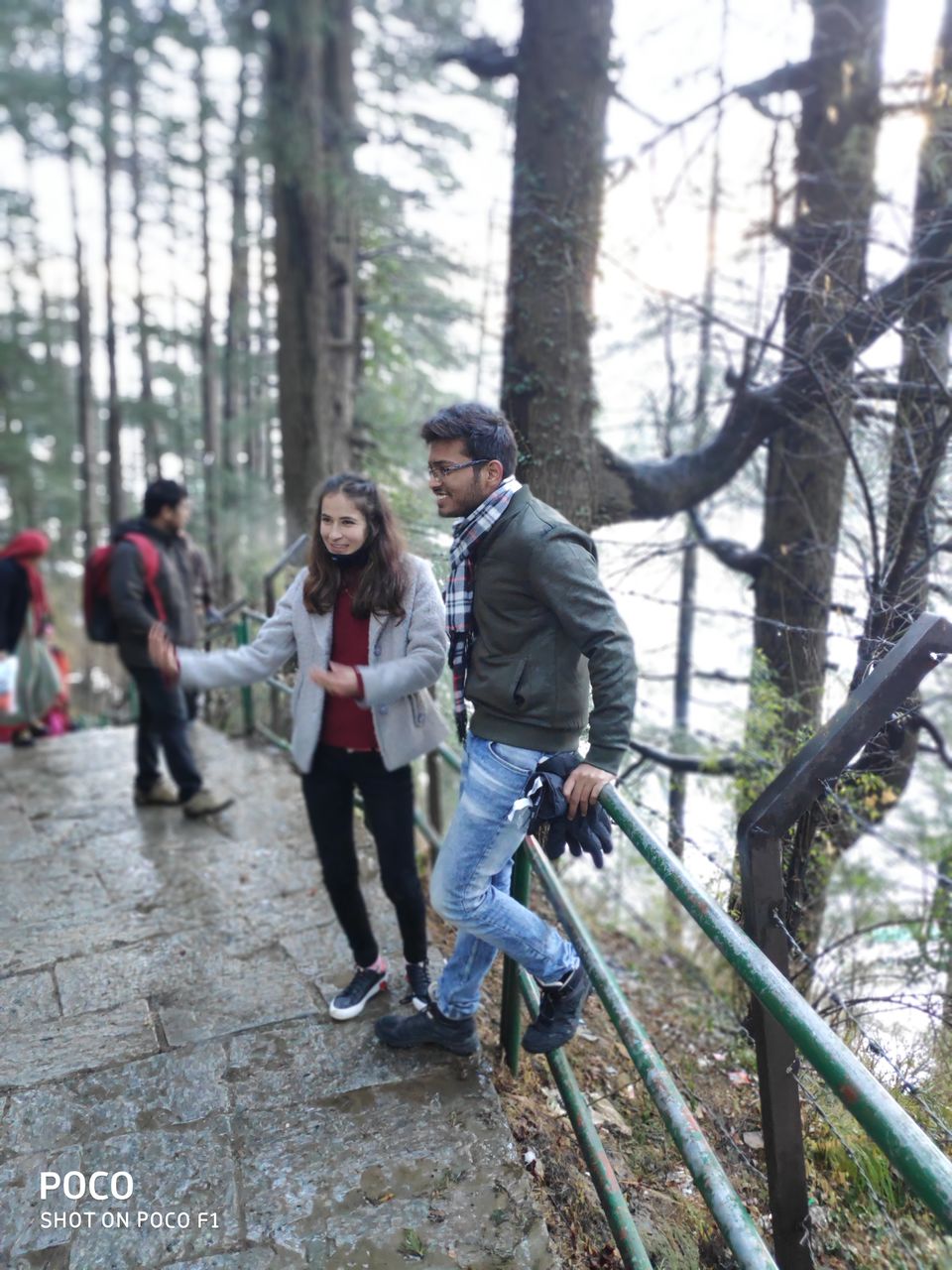 we woke to witness the beautiful views of snow-capped mountains in front of us and the entire city with snow filter applied due to snowfall last night.you should be lucky enough to witness the fresh snow in any hill station we had a clear agenda for day that was to go for the jogini waterfall trek which was considerably a small and easy trek with splendid views. The trek starts from the vasisth temple and is a 3.5 km trek till jogini waterfall.we stayed in vasisht village only so its was easy for us to reach temple but if you are staying near mall road the route gets longer for you as to reach vasisth temple only you need to walk 2.5 km from mall road.you can take a cab till vasisth temple but then you will miss the beautiful views that the beas river off with snowy mountain in backdrop.when you finish the jogini waterfall trek you withness a astonishing water fall and equally beautiful views that is a treat to eyes. while returning back from waterfall we took a wrong turn that dropped us on manali-leh highway where internet was not working making us wonder where are we stuck. A normal person would have found a way to reach back but decided to sit along the beas river and click some pictures.while we were going down from the road to river we found some locals along the river bank and asked them for the way to manali. They told us that we have taken a wrong route and 5 km away from manali. After chilling(literally chilling ????) around the river for an hour we realised that we are actually getting late as is was getting colder as the sun was going down and also our feet were freezed due to walking in snow. We walked walked to our hotel and laid after this tiring day. 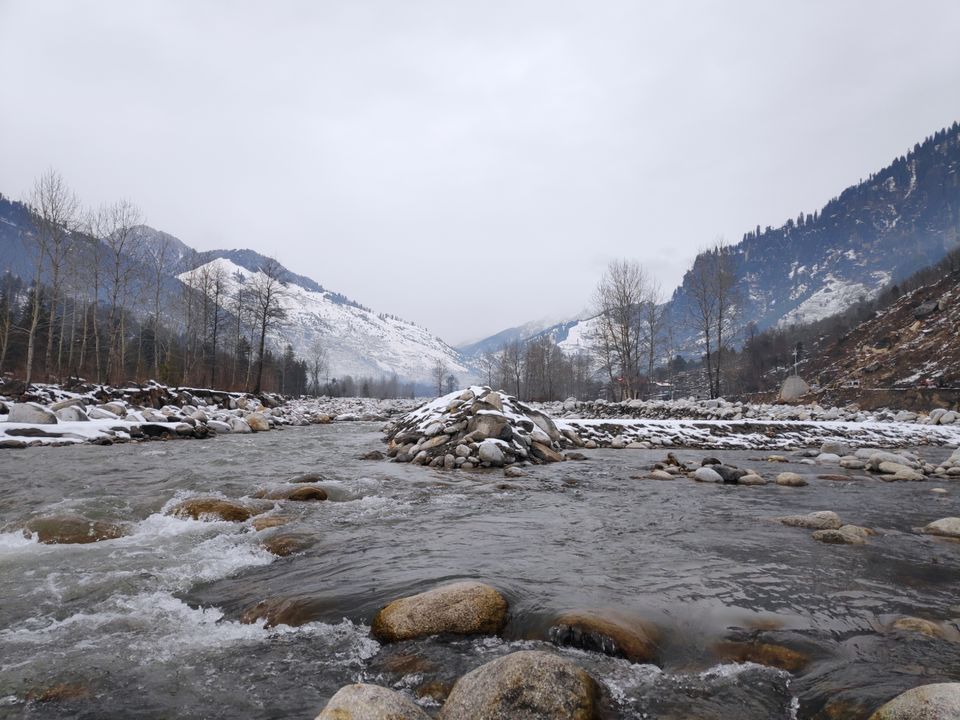 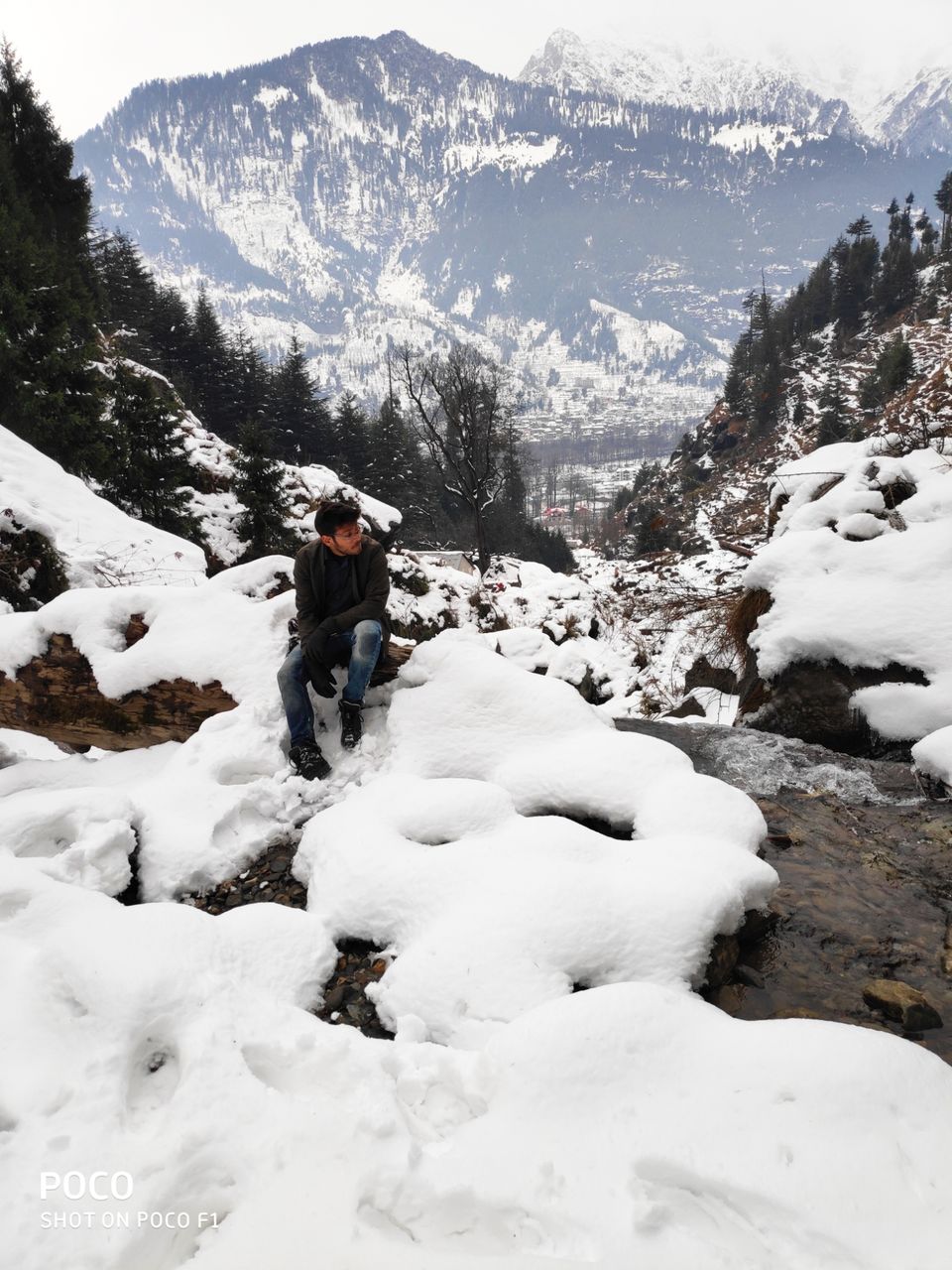 Waterfall Crossing in the trek 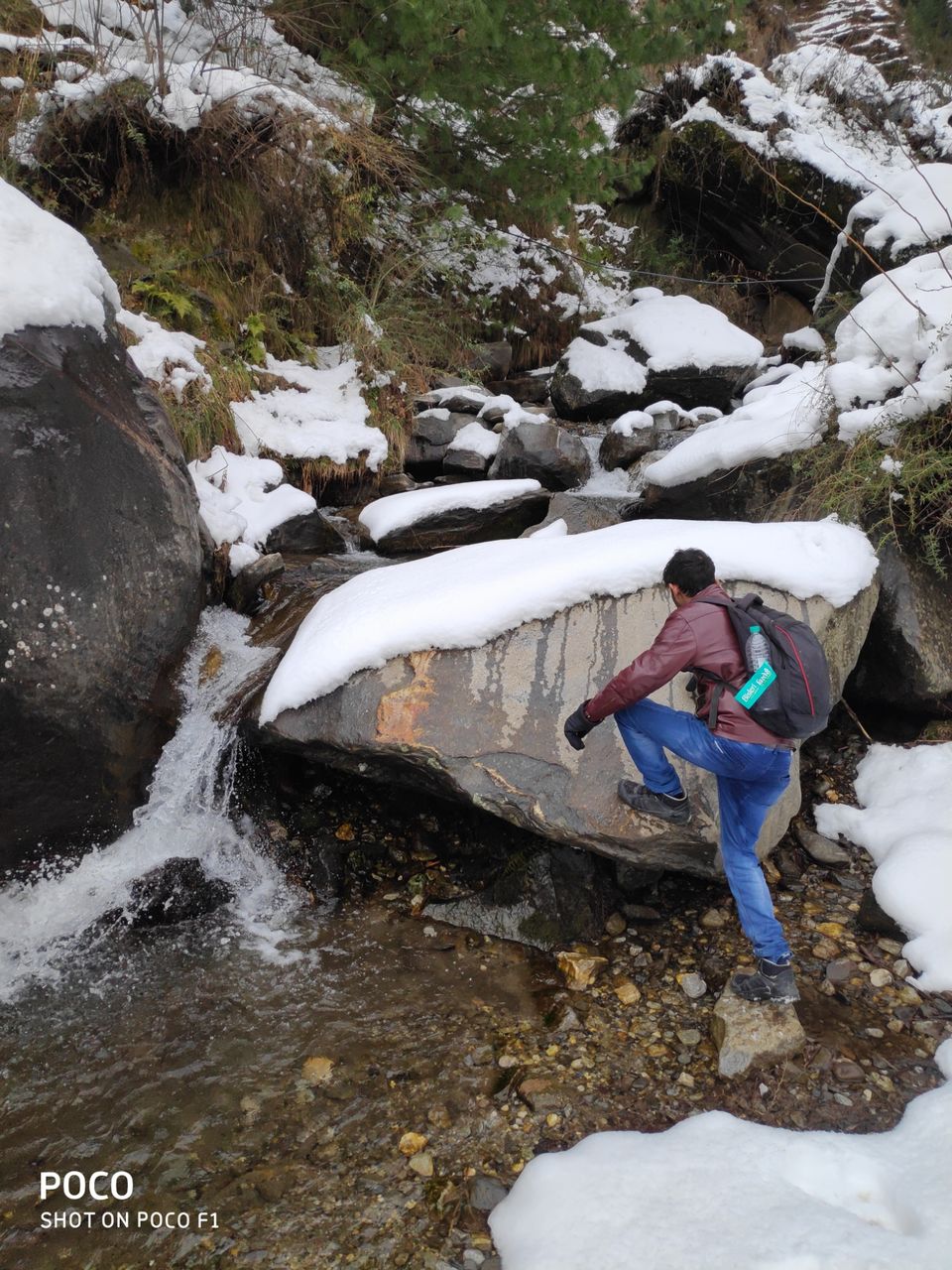 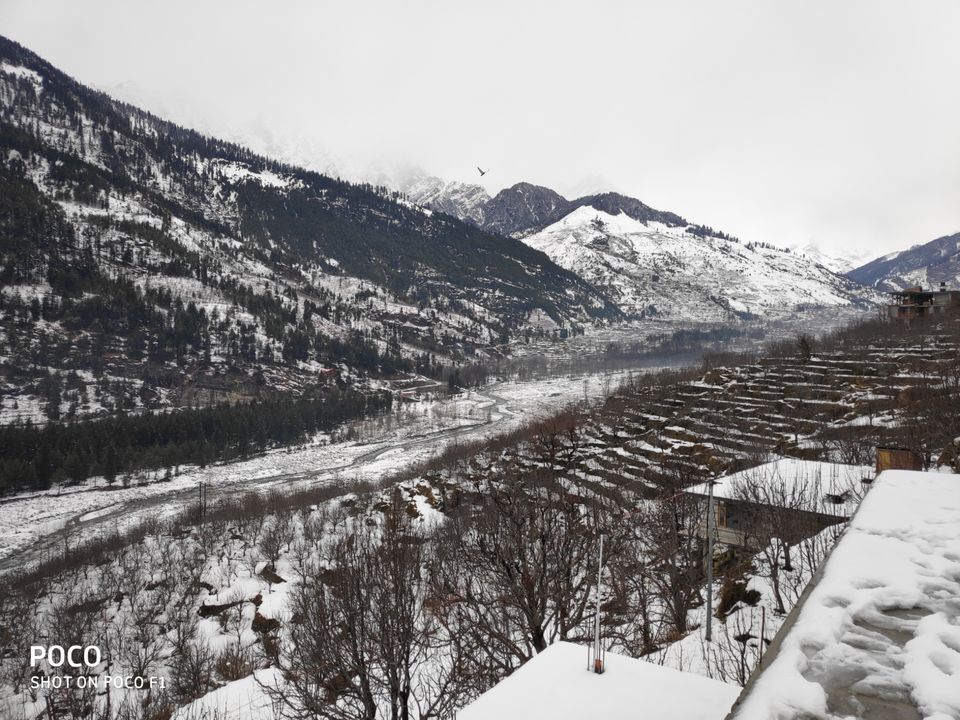 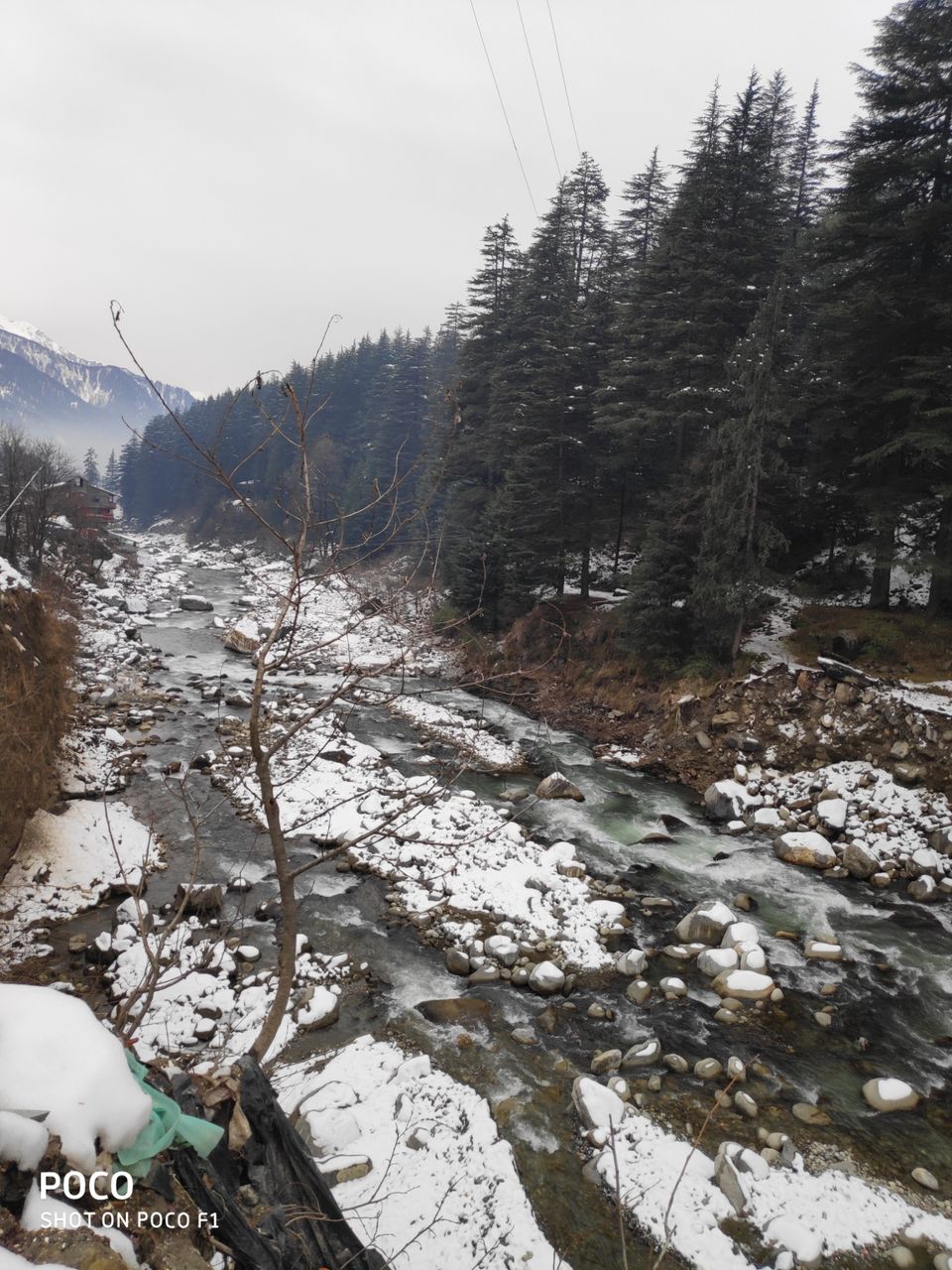 Day 3 started with the agenda of bilji mahadev trek but the route to it was tricky as we had no idea about how to reach the base of trek but again local guiding us how to reach bijli mahadev village to proceed for bijli mahadev temple.you basically have two option to reach bijli mahadev village i.e reach kullu and take a local bus to village which costs you 40 ruppees else you can take a cab from kullu which charges around 1000-1500 depending on your bargaining skills. we were on a short budget and took a bus to village which took approximately 1.5 hours to reach the village.one things about bus drivers here is that they have immence confidence on themselves that you will witness once you visit Himachal Pradesh. We started our trek with our backpack on our back as we had to leave same night. Bijli mahadev is a test to your stamina as the climb is too steep. Reaching mid-way the bag look impossible to carry so we stopped at a tea stop next to us,the uncle in the tea stop was quite friendly and agreed to keep our bag in his shop making our trek easier it took almost 2.5 hours to reach the top but once you reach the top all the effort in climbing seems worth it. From the top you can see the kullu city from one end to parvati valley on the other.there is a lord shiva temple on the top which is closed in winters. one advise here is to carry biscuit with you to feed dogs. the dogs here are quite athletic and you will enjoy feeding them. We had no idea of time we were spending on top and eventually got late in reaching the bus as the last bus to kullu had already left and that moment i was afraid what to do as we had to catch the bus to delhi 3 hour afterwards and there was every chance that we will miss that but then our eyes got on a group of bullet(bike) when gave us a hope that these traveller might help us get down.few minutes after they came and happily dropped us to kullu. In all this mess we were able to witness beautiful evening in kullu. finally we were in kullu bus stand ready to leave with beautiful memories. 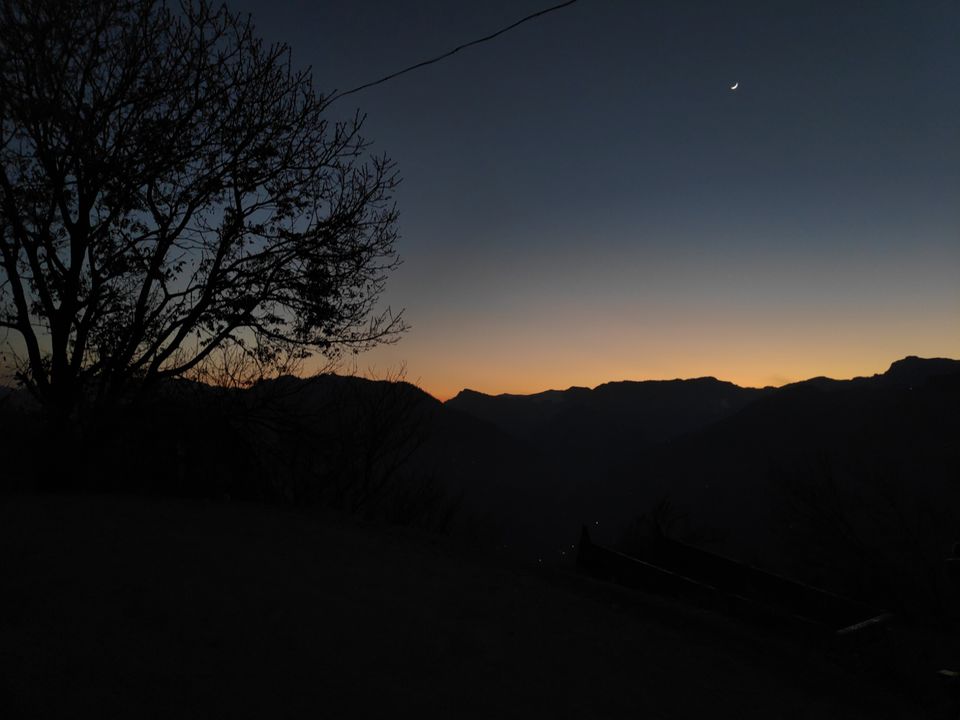 Parvati valley in the background 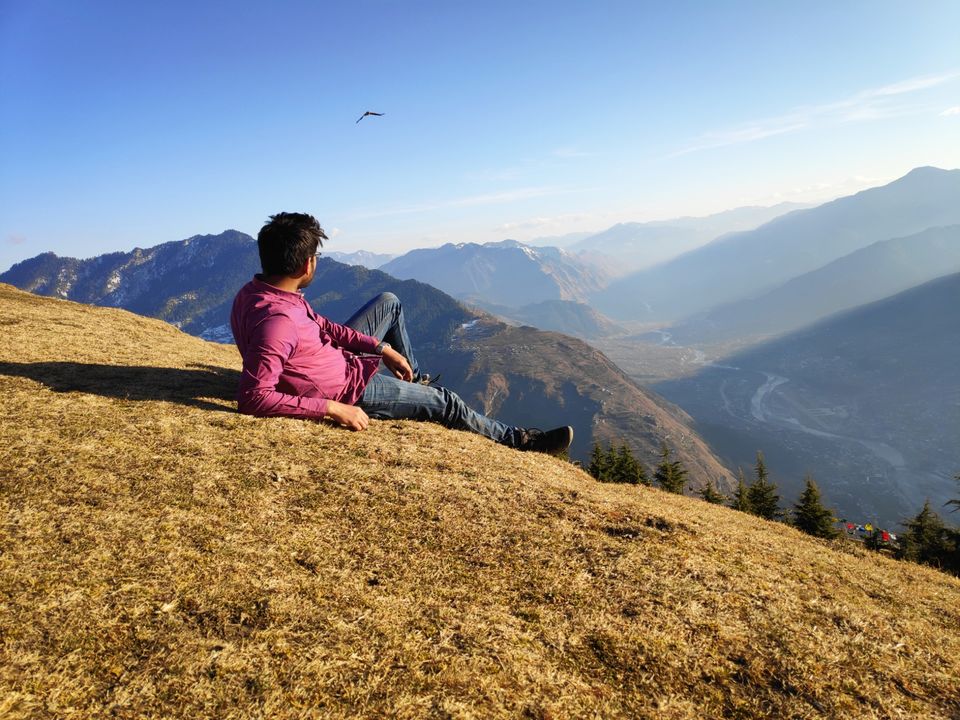 Entry to the temple 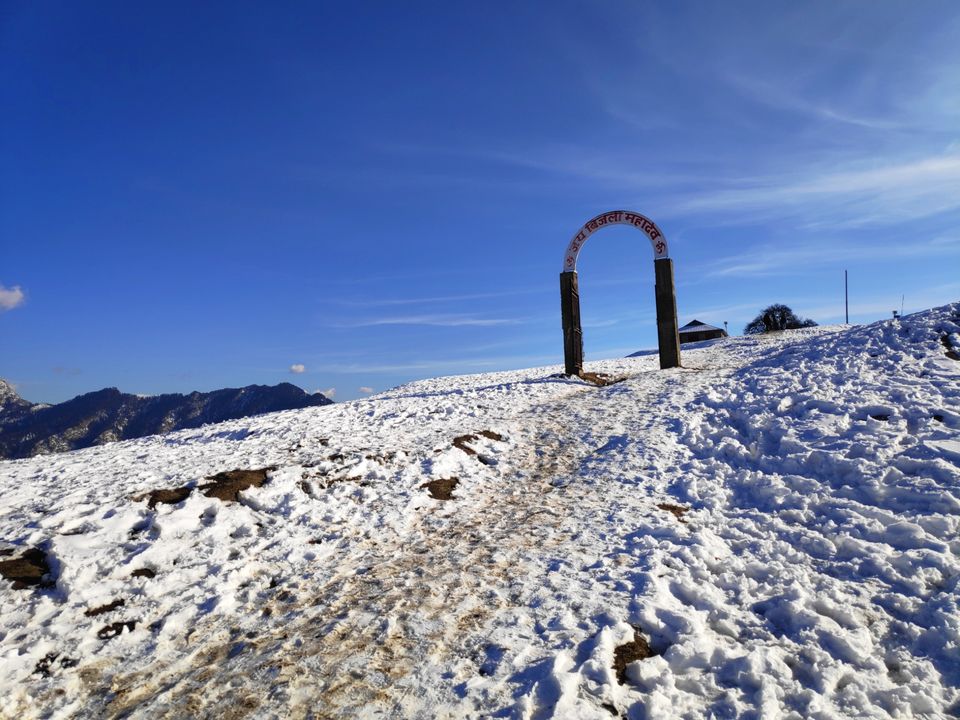 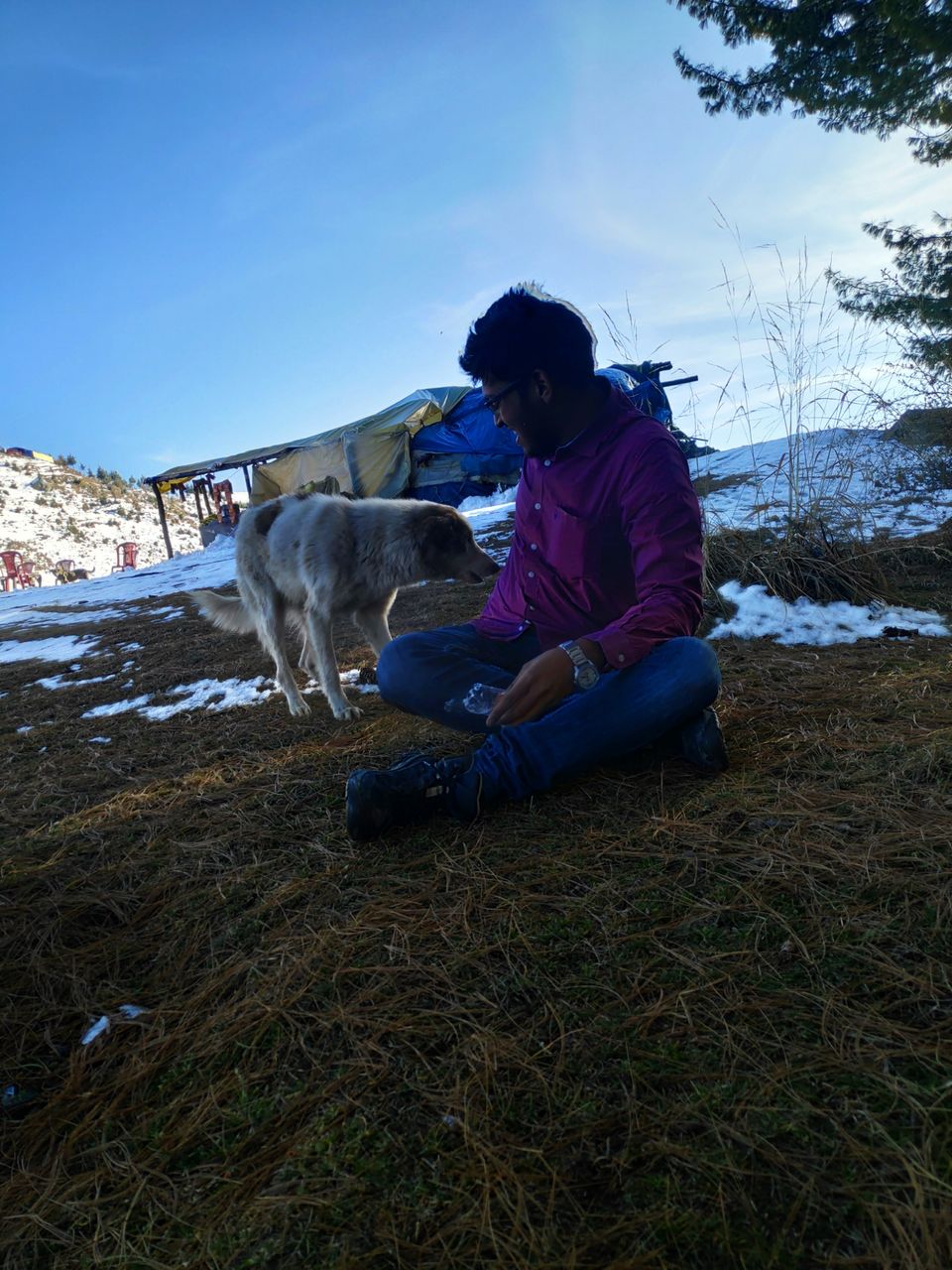 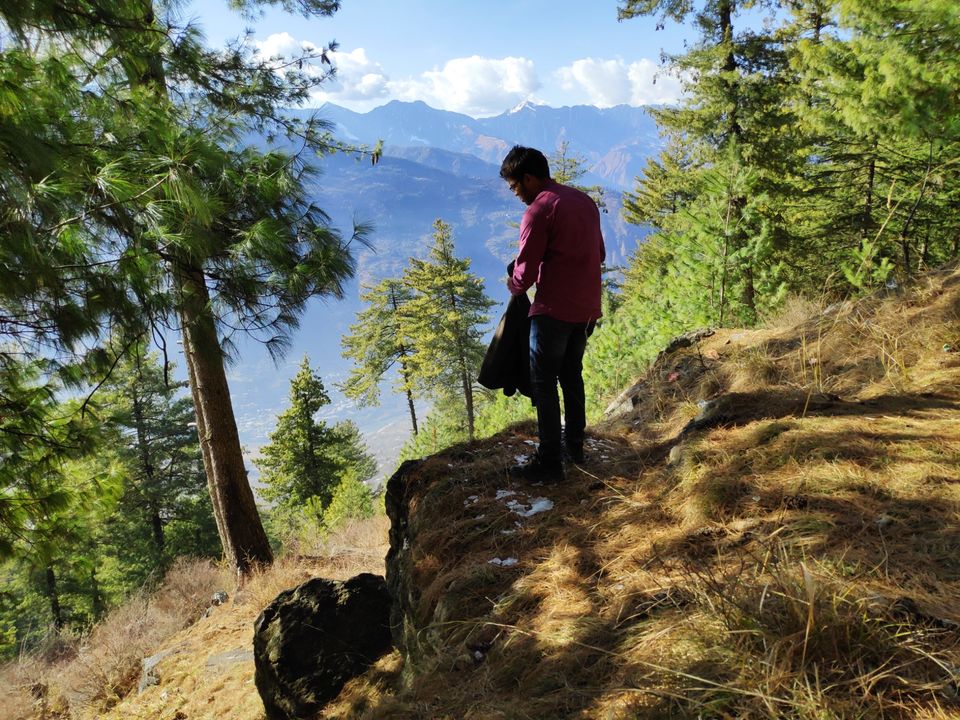