The City of God- Kathmandu Durbar Square (Part - I) 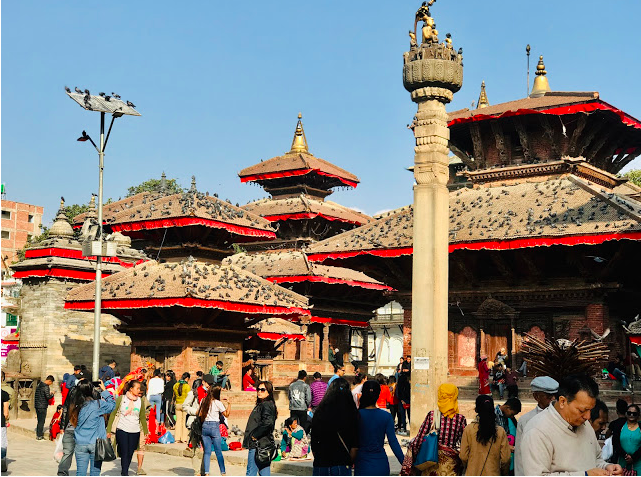 I was excited and energetic, and somewhere deep down the heart I knew I would love Kathmandu..!! The love towards the valley begins with the movement your plan land to the Kathmandu airport, the rolling hills around you carpeted in its colourful cityscape. This 220 sqm region has become a place that has denset concentration of UNESCO World Heritage Sites in the world. 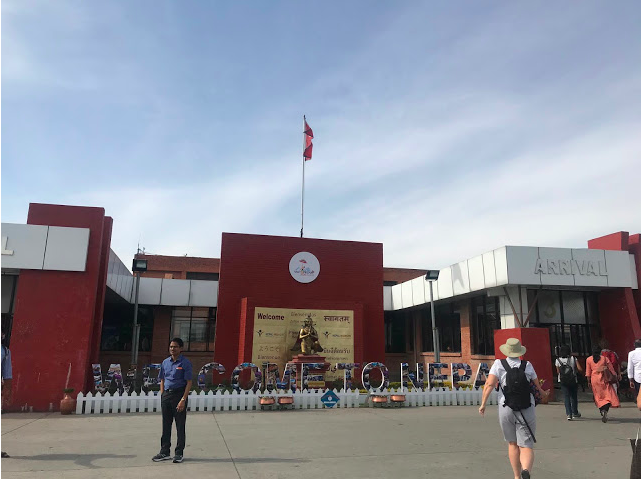 Kathmandu Airport : Surrounded by the breathtaking view and the beautiful mountains 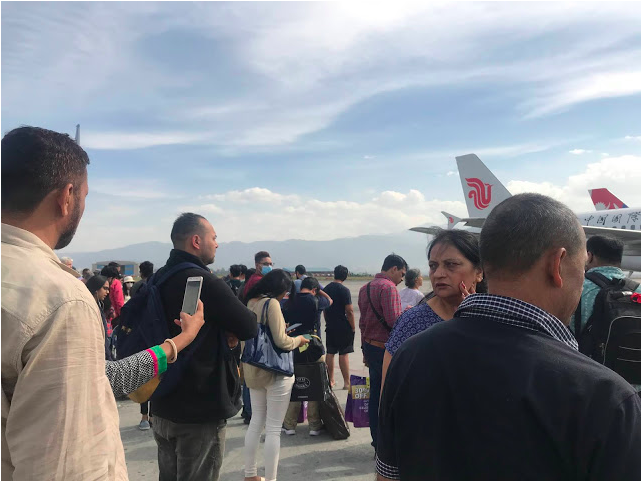 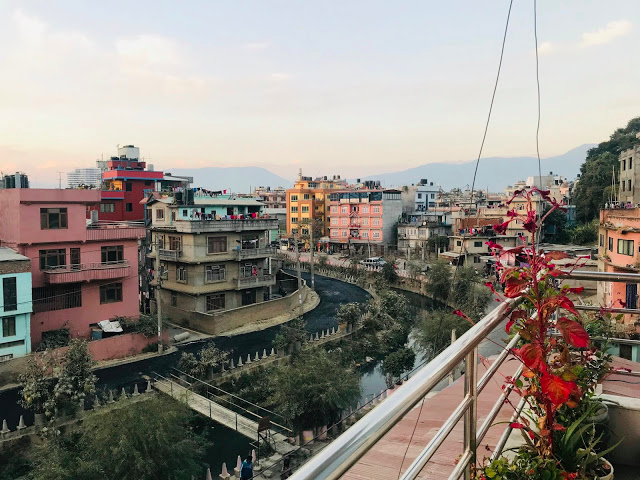 Kathmandu, the fascinating capital of Nepal, originally known as Kantipur, has a rich history dating back to the 12th century. The city with 2000 years worth of history live among the collapsing walls and still standing temples.

The city is home to some of the most revealed cultural sites in both the Buddhist and Hindu communities, hence, also called "The City of God". The city full of craziness, colors, historical value, chaos, haphazard, and vibrance, the city that is unique and different to anywhere you will visit in the world. The best part was to explore such a dynamic city on two wheels which embarked me with fascinating sights, smells, sounds, as well as an awe-inspiring look to the number of temples complexes and squares.

The 3 Durbar Squares in Kathmandu: KATHMANDU, PATAN and BHAKTAPUR

Nepal was split into three main kingdoms, namely, Kathmandu (the large city and capital), Lalitpur (called Patan), and Bhaktapur. Each of these have royal palace and durbur square (a generic name give to plaza or area in a certain old places) making up the Kathmandu valley. These places are the perfect places to admire the culture, tradition, Newari wood carvigs, and architecture of Nepal.

2. For SAARC Country Resident: Nepali Rupees 150 (Plus the Camera Charges)

One of the three Durbur sqaure and a UNESCO World Heritage Site showcasing the skills of Newar articts and craftsmen as well as spectecular architectures. The durbur square lies in the royal region and holds the palaces of King Ratan Mallah and Prithvi Narayan Shah who ruled over the city. 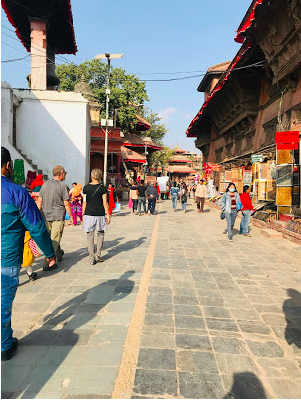 The place is also know as "Basantpur Durbur Sqaure, this was first built by Mallah Kings (they ruled here till the 1769) and later on conquered by the Shah Dynasty. The Shahs were designated in this square til 1820s and later on they abonded it as a residential place and moved to Narayanhiti Palace. Howvere, the kathmandu drbur sqaure continued to be royal Nepalese resisndece where important ceremonies such as coronation of the Napelese monarch and annual festibal of Indra Jatra are performed. Most importantly, the abode of the Living Goddess Kumari still remians as its key attaraction.

1. Kumari - The Living Goddes of Nepal:

Kumari Ghar is one of the major landmark in the Kathmandu Durbur Sqaure as it actuualy houses the living goddess - Kumari. It is belived that Goddess Taleju/ Durga resides wurhin a special girl child till the girl comes of age after whoch she vacates her body to occupy another. There are several stories behind the Goddess Kumari. But the history beside this revolves aound the last Malla King "Jayaprakash Malla". As it is belowubed that Goddes Taleju used to vist the king every night to play the tripasa, a dice game, with the coondition that king does not tell anyone about their meetings. But one night the kings wife saw him with Taleju and in ander the she told the king that he would search for her among the Newari (Shakya) community of Ratnawali if he wanted to see her agaon. Hoping for the same and amend his promise, the king went on teh seacth for the young girl who was possessed by Talejus Spirit 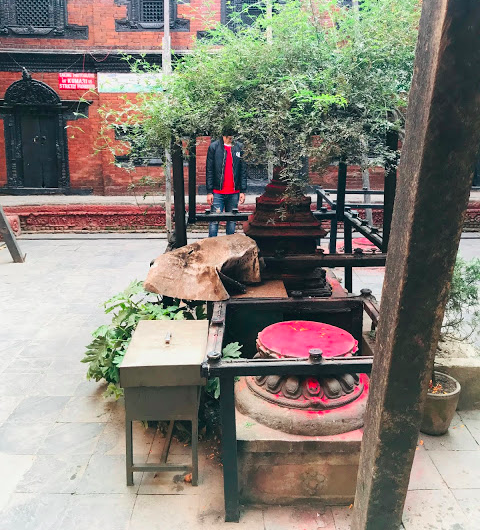 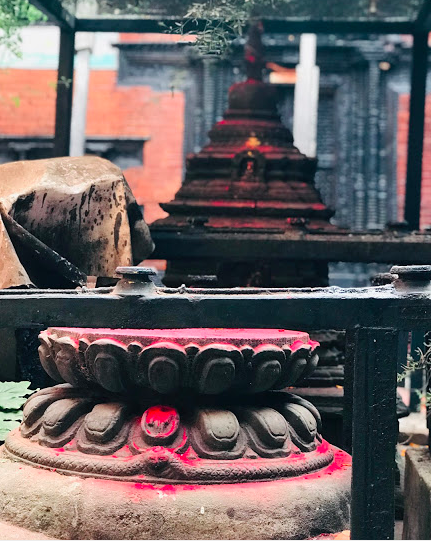 One such story beleived about the disappearence of Taleju was that Goddess Taleju used to visit the King Trailokiya Malla every night in the human form. one night the king got little carried aqay and tried to make sexual advances with Taleju because of which the Goddess got angry and stopped visiting the place. However, king regretted this and begged her to return back, on which agreed to return as a child from the Shakya familu and since has been worshiped at Kumari.

The Shiva Parvati tenmple built by Rana Bahadhur Shah is incarnited in Newari Style with spectacular carvings in windows and doors. The temple encompasses the wooden umage of Shiav and Parvati on the upper floor and two lions standing outside the temple in order to guard the sqaure. The Shiv and Parvati popping out of the window seems to shower their blessings on the passers. 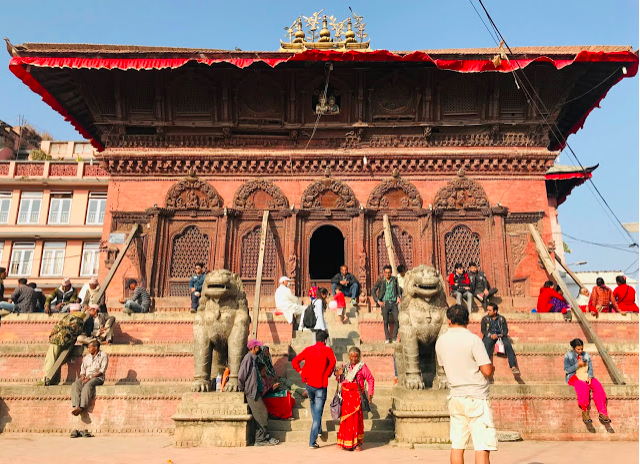 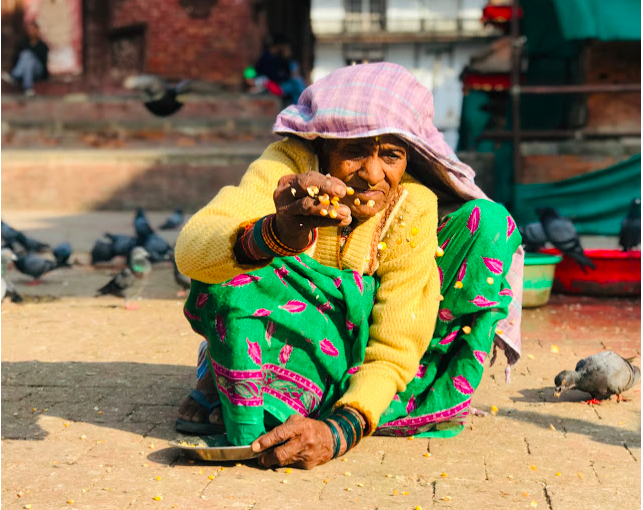 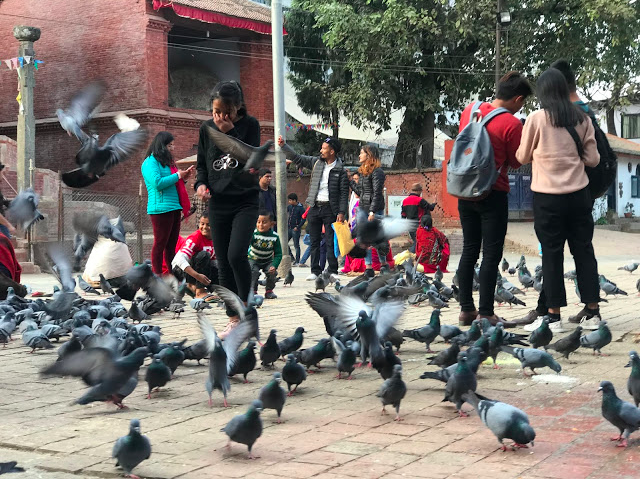 This was one of my favourite place to spend time 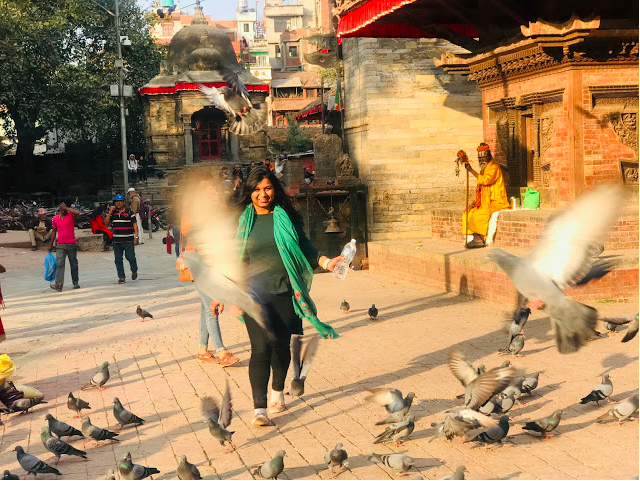 Terrifying yet beautiful, this is how I would define it as it just seems to attract you with its fearfull presence. Kal Bhairva image is approximately ten feet high located near the Jagnath Temple. It is consdiered to be destructor form of Lord Shiva and is belived that the Bharava statue force people to speak truth 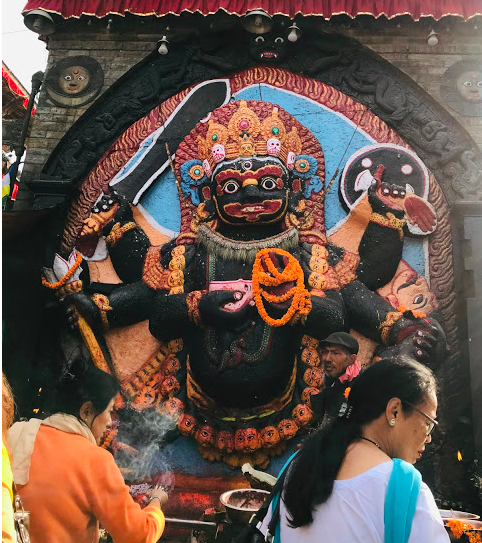 It is on the west side of the Durbur sqaure and is on the entry gate to the Basantpur Palace, where a stading statue of Hanuman guards the palace. 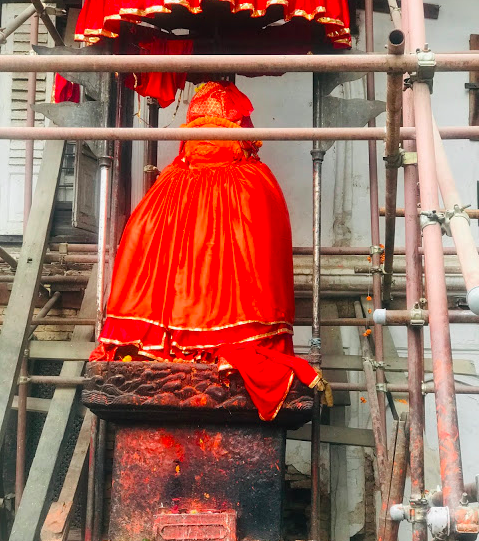 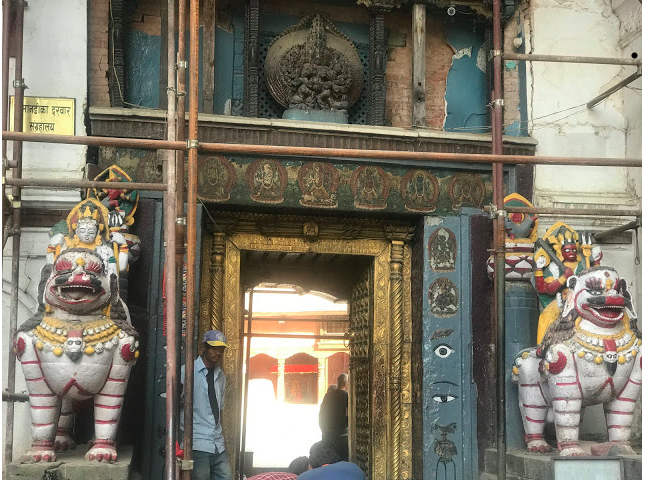 Ahead of the main entrance, adjoiniung is the nasal chowk (nasal means dancing one), nul chowk, mohan chok, and museusms.

Narshima Statue on the entry at Basantpur Palace 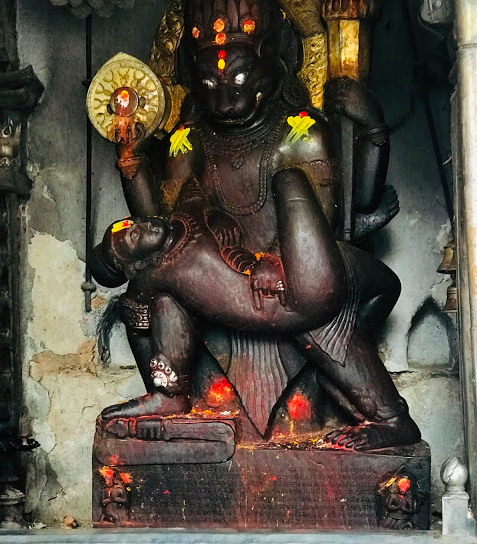 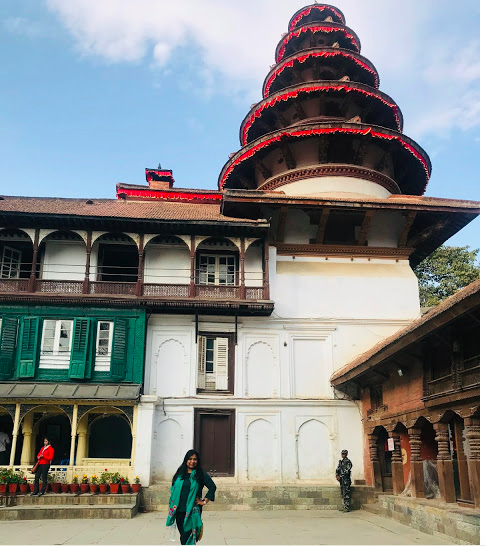 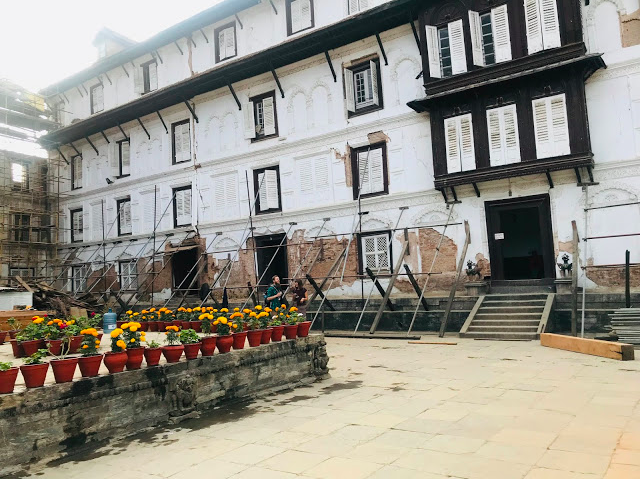 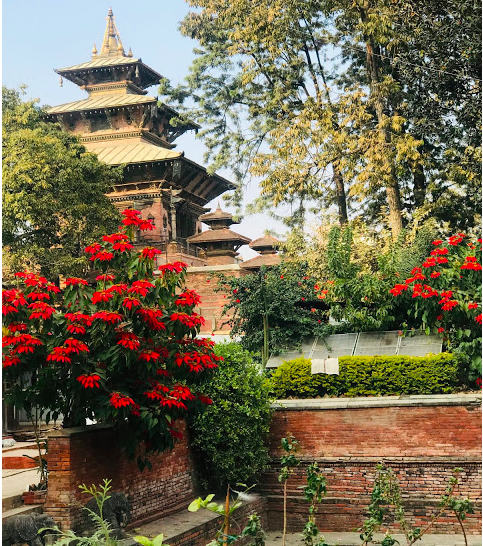 This beautiful palace suffered a huge loss after the earthquake of 25 April, 2015, the Nine - Storied Tower Complex was severely damaged. The below pics provides the glimpse of the destruction: 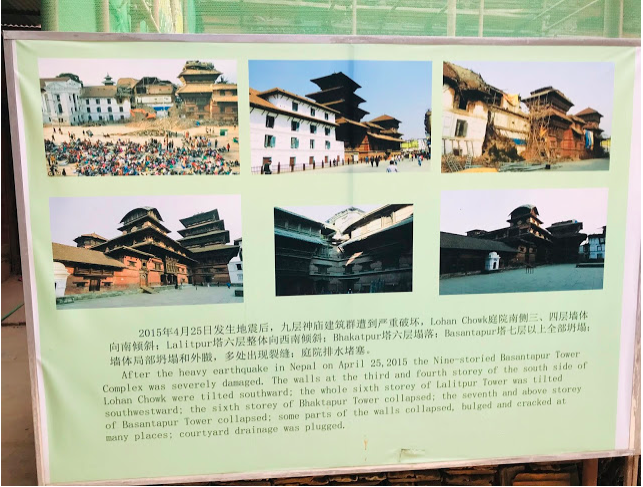 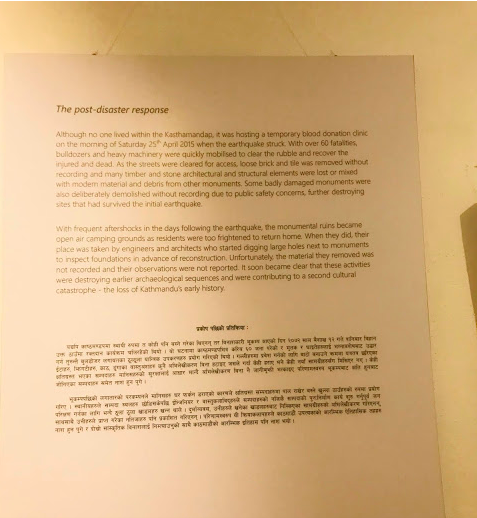 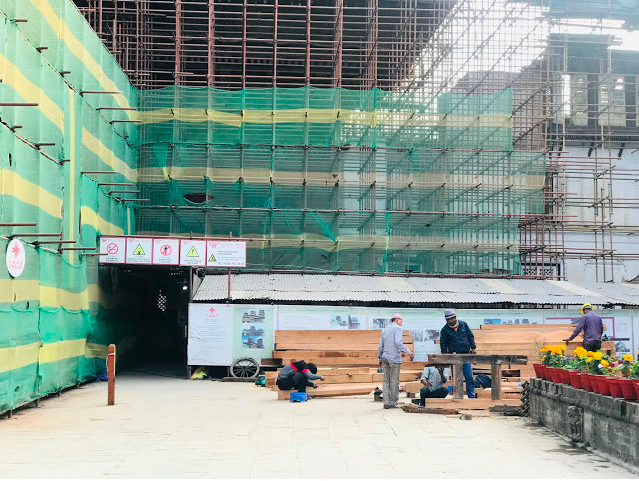 Engineers at work for reconstruction of the palace 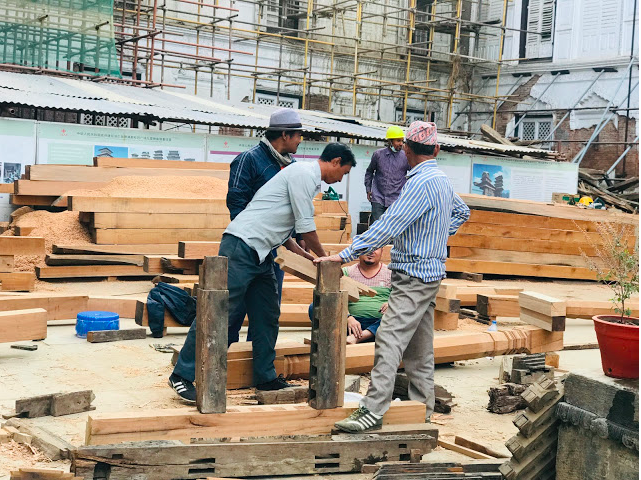 Basantpur Palace Under Reconstruction after the earthquake of 2015 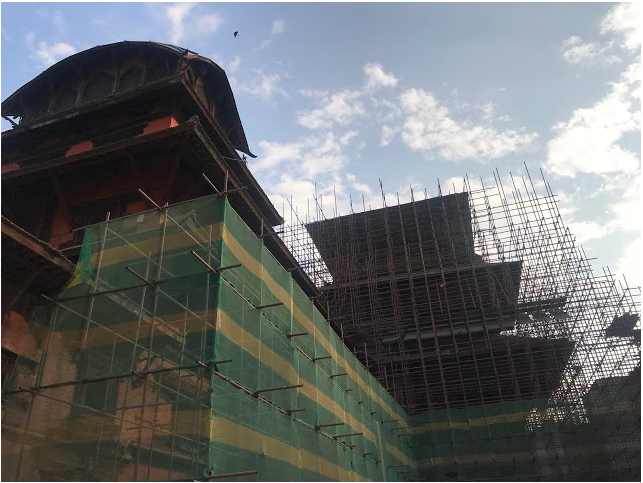 This was all about the Katmandu Durbar Sqaure, keep following to know more about the remaining 2 durbar square.