The picturesque capital city of Nepal Kathmandu has several attractions for the visitors including ancient temples, shrines and museums along with shopping options. However, your tour of Kathmandu will remain incomplete if you do not explore the enchanting and multi faceted Durbar Square. The former royal residence of Nepal and its adjacent attractions will leave any visitor enchanted. The architecture, temples, ambiance of the place will take your mind to the bygone ages. 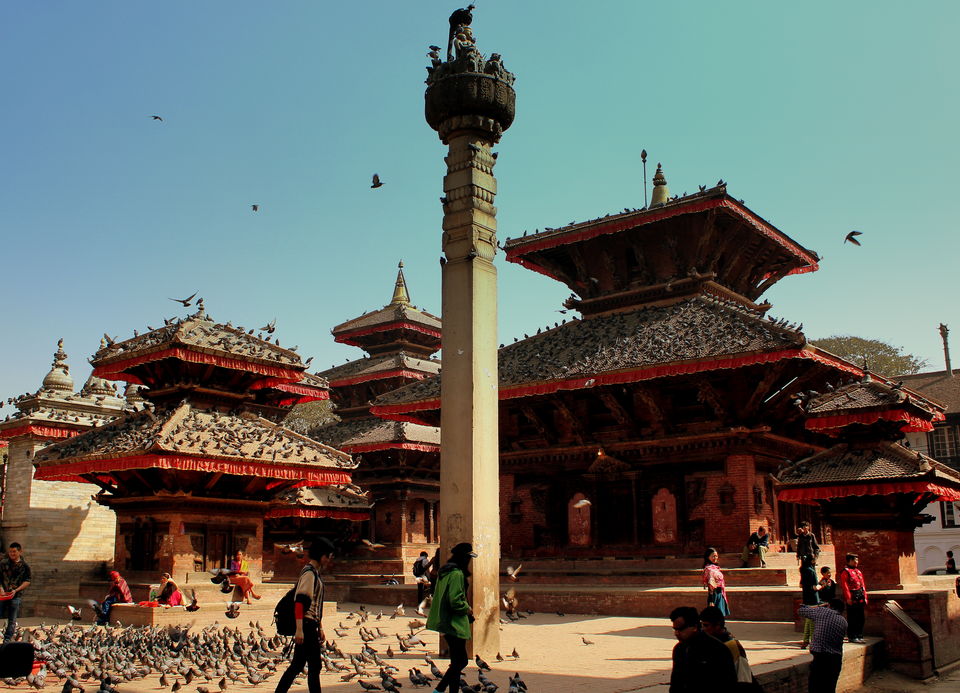 One of the UNESCO world heritage sites in Nepal, durbar square in Kathmandu draws thousands of footfalls every month, and not all visitors are religious, necessarily. While there are 3 such durbar squares in Kathmandu valley the Basantpur Durbar Square is the most prominent and popular one. The intricate setup of royal palaces, temples and streets has an impressive heritage dating back to the 12th century. Even if you are not much into history and religious stuffs, it is impossible to overlook the architectural beauty of those majestic edifices!

While the historic buildings and temples have their own stories dating back to the ancient past, it is impossible to overlook the present ambiance of the square. You will find hundreds of local men and women selling stuffs, strolling round the square at all times. The massive earthquake that hit Nepal in 2015 left Kathmandu Durbar Square ravaged but its north part is mostly unaffected. Even in the remaining part, the blend of Kathmandu Durbar Square eastern and western architecture is quite evident.

The Basantpur Durbar Square was set up by the Malla dynasty and later it was under seizure of the Shah Dynasty. Some of the edifices have origins in the Licchavi period. After the reign of the Malla Kings, the Shahs dynasty captured the throne and they used the square until 1820. While it was not the royal residence afterwards, the royal family still used it for special events like coronation of the kings. Even now, the place is used to arrange Indra Jatra- an important annual festival.

While exploring the historic square, you should not miss out the following temples and edifices:

Kumari Ghar- This is possibly the most famous landmark in the entre square and draws a majority of visitors. You will be amazed by marvelous architecture of the three-story brick building. It is situated next to the Snake temple. It was set up in 1757. It is also known as House of the Living Goddess. The Kumaris are selected much like the way Tibetan lamas are selected.

Gaddi Baithak-The huge white European style building looks a tad modern compared to the adjacent temples and edifices. It was used by the Kings to meet the foreign delegates. Made in the 1900s it was renovated after the massive quake that ravaged Nepal. You can find blend of both Mughal and Newari architecture style in parts of it.

Kasthamandap- The remnants of former Trilokya Mohan Narayan temple exist in form of a huge Garuda and behind it stands the Kasthamandap. The majestic edifice is now in ruins though. It was said to be made with wood taken from a single tree. All you can see intact are the stone lion guards. It has god Gorakhnath image.

Temples- In Basantpur Durbar Square, you will find a number of important and beautiful temples but not all of them are in good form. A few of these temples got ravaged by the quake a few years back while others are still accessible – more or less. The major ones that you must visit are Kalbhairav temple, Taleju Temple and Kotilingeshwar Mahadev temple. Of these, the Taleju Temple is quite significant since Taleju is deemed to be the chief protective goddess of Nepal. The three-tiered temple is opened to the public only once every year. The Shiva-Parvati Temple is also worth a visit.

Hanuman Dhoka Palace- The amazing Hanuman Dhoka palace serves as a museum now. However, it used to be the royal palace a century back. The name is owing to a Hanuman statue positioned in front of the edifice which is spread over 5 acres. Despite damage from the quake, the architecture of the building remains enticing.

Useful tips for the tourists

Reaching the Durbar Square is easy for the visitors. It can be reached from the Trivuban International Airport. Using cabs is the best option and many tourists walk to it from Thamel. However, you should take care when walking along the busy streets. Cabs can take you to the square from literally anywhere in Kathmandu.

People from other countries have to pay 1000rps to get entry to durbar square in Kathmandu. The tickets remain valid for a day. The museum charges are inclusive of ticket price. If you plan to stay long in Kathmandu and near the square buy a long-stay ticket. While exploring the area, be careful about touts approaching for tours and fleecing afterwards. You have to pay additional charges for carrying a camera though. Remember 4 wheelers are not allowed to ply inside the square but 2 wheelers are permitted.