London Travel GuideLondon TripsWe Packed As Many Of London'S Landmarks As We Could Into Two Days, How'D We Do?

We Packed as Many of London's Landmarks as We Could into Two Days, How'd We Do? 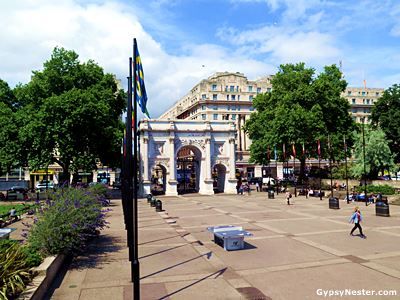 From our base in Paddington, we began our assault by entering Hyde Park through the Marble Arch. The park is the largest of the Royal Parks that surround of Kensington and Buckingham Palaces, which were definitely two of the items on our checklist, but we found discovered several distractions along the way.

The first being Speakers' Corner. This corner of the park, right by the arch, has been a haven for open-air speaking, debate, and discussion for several centuries. In 1872 it was codified into law with the Parks Regulation Act that guaranteed the right to meet and speak freely in Hyde Park.

This freedom has brought out everyone from the famous, infamous, crazy, confused, intelligent, or just plain unintelligible, including some historic figures such as Karl Marx, Vladimir Lenin, and George Orwell, to take part in protesting wars, supporting suffrage, or just advocating or opposing current conditions. 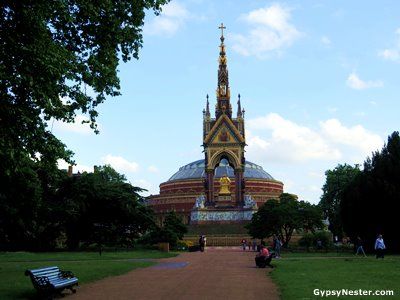 After receiving our own earfuls on several subjects from the current crop of orators, we moved on toward Kensington Gardens and the palace of the same name, but there was more to see before we could get there.

As we made our way, it was impossible not to notice the Albert Memorial and the giant golden Prince sitting gazing toward the concert venue that bears his name. We don't know about him, but we were unable to look at the Royal Albert Hall without the realization that now we know how many holes it takes to fill it.

Popping out of the park's woods, we came to Kensington Palace. Royals have been residing here since the 17th century, including kings and queens, and now it is the residence of Princes William and Harry, along with Kate Middleton (Duchess of Cambridge) and various other Dukes, Duchesses, princes, and princesses. 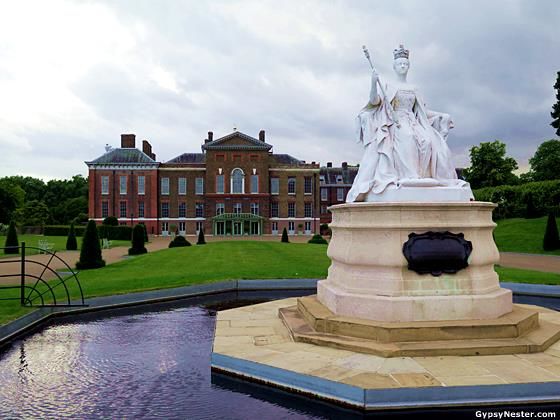 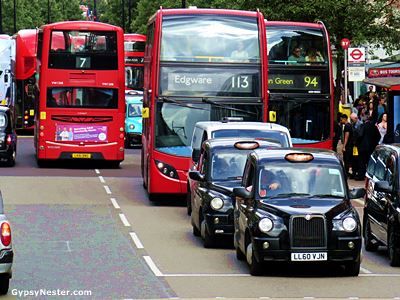 Sounds crowded, but with multiple apartments divided in at least a dozen different wings and buildings they most likely have to try pretty hard to bump into each other.

By this time we had walked enough, so the time had come to board one of London's iconic double-decker busses.

This is not the fastest way to get around the city, but it is the cheapest, and most fun. 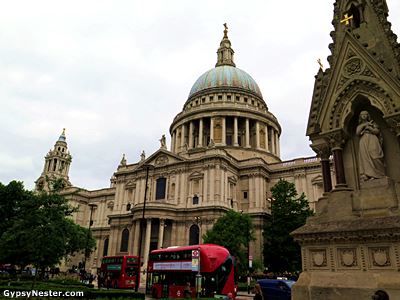 Our goal was to catch all of the sights across town near the Tower of London, so we hopped off at St Paul's Cathedral.

Long one of the most famous of landmarks in London, the dome is still among the highest in the world. For a long time, from 1710 to 1967, it was even the tallest structure in the city. 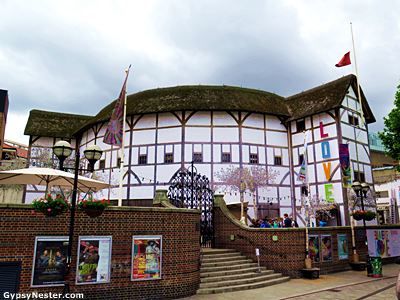 Right across the Thames River, the Globe Theatre stands out starkly against a background of modern buildings. Actually, the theater we saw is more modern than many of those new arrivals because this is only a replica built in 1997.

The original, or more accurately the two originals, disappeared over 350 years ago. The first stood from 1599 until it was destroyed by a fire in 1613.

The second, which is recreated in the current reproduction, was built the following year and was torn down by Puritans in 1644. It would seem as though Shakespeare's popularity must have been on the wane at that point in time.

The huge Doric column provides some of the best views of the city anywhere, as long as one is willing to climb the 311 steps up the spiral staircase to reach the viewing platform near the top. 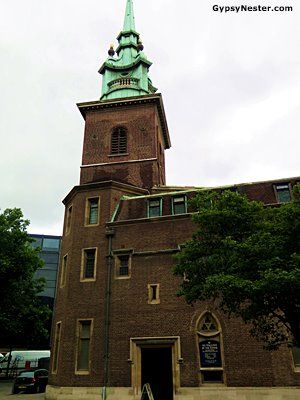 One building mostly spared by the fire is All Hallows-by-the-Tower, acclaimed as the oldest church in London. Established in 675, the church was built on the site of a Roman building. We know this because some remnants remain in the crypt.

Since it is right next to the Tower of London, it also became the temporary burial site for many of the beheading victims of the castle.

While the Tower does have many classic castle characteristics, it is really more of a complex of buildings than a single fortress.

Even though it was once officially Her Majesty's Royal Palace and is still home to the crown jewels, its beginnings certainly do not bring pride to any British hearts. 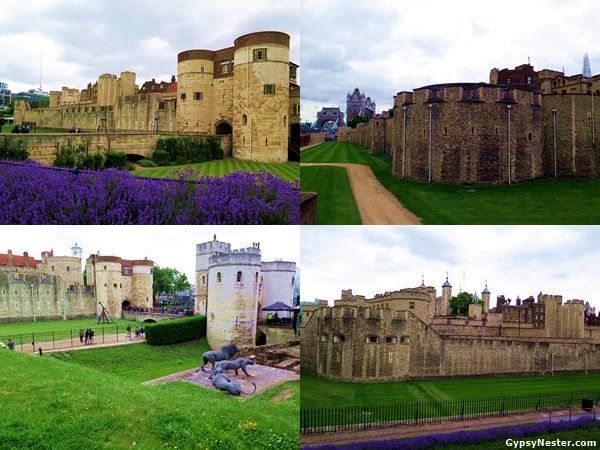 It was built by William the Conqueror in 1078 after the Normans overtook England, ushering in a succession of French speaking English kings until Henry IV took the throne in 1399.

It also has a dark reputation as prison where many heads were separated from their bodies, perhaps most famously Anne Boleyn, King Henry VIII's second wife who was beheaded in 1536. She is said to still be seen roaming around the Tower carrying her head under her arm.

All we know is that if we had seen her we would have high-tailed it across the Tower Bridge so fast that head she was toting would be spinning like a top! 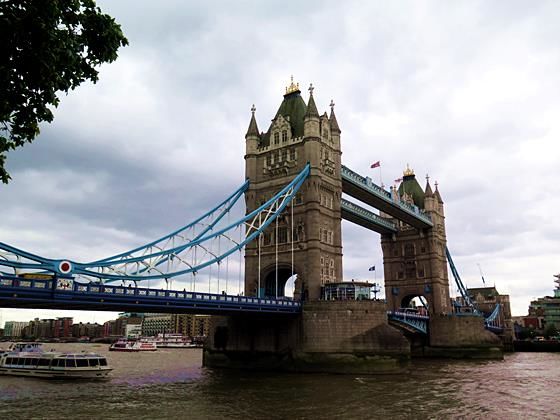 And it wouldn't be much of a run since the bridge is right there. Perhaps the most recognizable of London's thirty-three spans across the Thames, it is often mistakenly called London Bridge. But since it is certainly not falling down, nor did it ever get moved to Arizona and rebuilt, we are certain that it is not.

Of course back in the days when the Tower was still being used to fend off invading hoards there was no bridge. It would have made it too easy to storm the castle, so the bridge is a relatively new one hundred and twenty four years old. 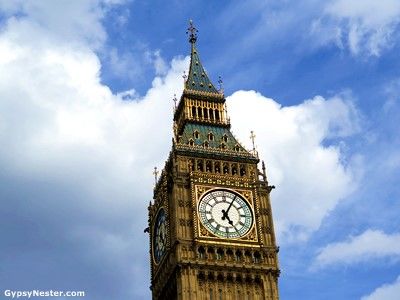 To take in the second round of the London landmarks on our list we took the tube to Westminster.

This allowed us to pop up from underground right in the political heart of Great Britain, directly beneath what just might be the most famous clock in the world, Big Ben.

Actually, the name was originally given to the largest of the bells in the tower, but has come to refer to the entire structure of Elizabeth Tower and is now most often associated with the giant clock. The rest of the building below houses the British Parliament but is technically still a royal residence, the Palace of Westminster. 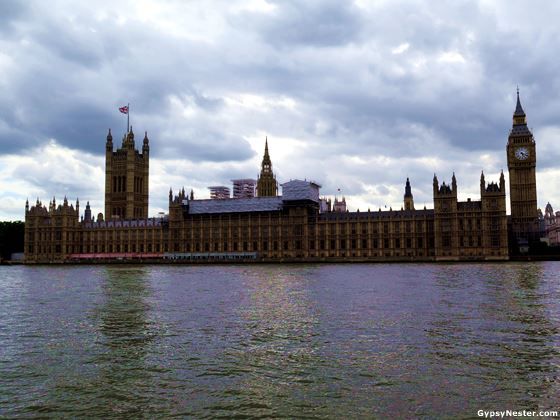 The government has been convening here officially since 1295, so we have to think they have settled in, unlike the monarchs, who have moved on to Buckingham Palace.

On our way to see the queen, or at least her house, we passed by Westminster Abbey. Calling it all the abbey is really a misnomer. There are several buildings combined within the complex, one of which is the abbey, others include the church, sanctuary, chapter house, and cloister.

All in all these make for one of the most honored locations in London because this is the traditional site for both the coronation and burial of British monarchs. In fact, since 1066 every coronation has been here, along with sixteen royal weddings. 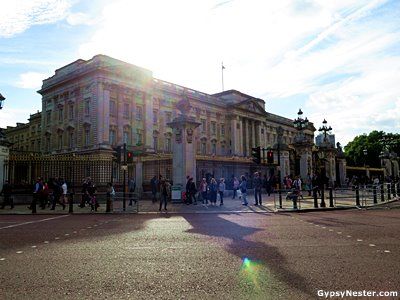 For nearly two hundred years those sovereigns have moved into Buckingham Palace after ascending to the throne. That meant we might have caught a glimpse of Queen Elizabeth, or one of her sons, Princes Andrew and Edward, who also live in the palace, but no such luck for us.

Guess we'd have to satisfy ourselves with a bit of a different variety of royalty, the Beatles. We hopped on another bus to Abbey Road, where an old townhouse was transformed into the Mecca of modern music when four lads from Liverpool recorded for eight years in it. 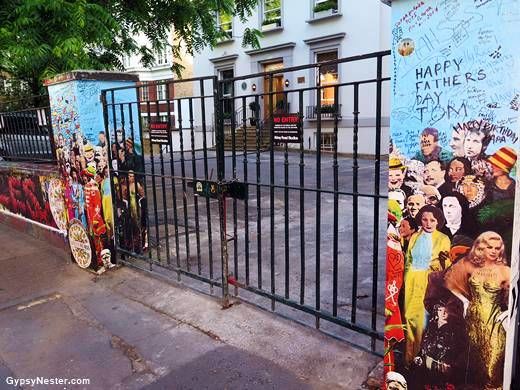 The culmination was the album they named after the street. From then on the studio itself became known as Abbey Road. It was a little underwhelming to visit, we were only able to peer through the gates, still we couldn't help but feel privileged by our proximity to the spot where some of the greatest music ever recorded was captured.

Definitely worth including in our landmark itinerary.