This was the first reaction when I asked my friend and office colleague about the market visit scheduled for the day.

'I am not getting out of my bed today'. He said. 'Please manage for today'

'God dammit !!!!' I thought. I could have stayed at Pune and enjoyed a good weekend with family.'

But suddenly a bulb inside my head lit and i realized this was a perfect timing to visit one of the long desired locations in Mahakoushal region- Marble rocks at Bhedaghat :)

Now for those who are not from Jabalpur or have no idea of Geography, Jabalpur is located on eastern side of state of MP. Once a British army's strategic location, Jabalpur is well connected by trains with many other parts of the country.

Jabalpur has known to have a long and prosperous history. Ashokan relics dating to 300 BCE have been found as evidence of the Maurya Empire (322 to 185 BCE). It was briefly ruled by the Satavahana dynasty (230 BCE to 220 CE). Local rulers, including the Bodhis and the Senas, followed before the region became a vassal state of the Gupta Empire (320 to 550) . From 675 to 800, the region was ruled by Bamraj Dev of the Kalachuri dynasty from Karanbel.

One of the Kalachuri amatya (ministers) was Golok Simha Kayastha, who was instrumental in founding the Chausath Yogini Temple near Bhedaghat. His descendants include Bhoj Simha, Diwan to Sangramsahi (reigned 1491-1543); Diwan Adhar Simha, Prime-minister to Rani Durgavati (reigned 1550-1564) and Beohar Raghuvir Sinha, Last jagirdar of Jabalpur until 1947.

Coming back to the topic of day trip, Bhedaghat is situated around 20 kms away from the Jabalpur city and is easily accessible by cabs. You can easily book an Ola cab for 800 bucks/4Hours/ 40 Km journey on the day of trip.

I decided to visit the falls early morning to avoid the heat and blazing sun in later part of the day. Left my hotel at 7 AM and was at the falls by 8 AM.

I would suggest the first thing to do when visiting this (or rather any spot !!) is to hire a good guide. Authorized and knowledgeable guides can give you an excellent overview of the entire location along with some incredibly good hidden spots and stories.

Was lucky enough to find a great guide who guided me through the entire area for the duration of 2 hours. You can book him in advance by calling a day earlier if needed.

Was charged 500 Rs. for this time duration. Maybe I would have got lesser amount if had bargained a bit....but personally follow a philosophy of 'won't be able to buy a Ferrari by negotiating 50 Rs from someone deserving'

Mr. Kamlesh truly is every bit the money he charges. He sang songs from movies shot at the location over years, told me geographic insights of the falls, the marble excavated, the local artists and why it is important to support them and the local folklore.

The first location we visited was of course the Dhuandhar waterfalls. Though it was late July, the lesser amount of rains received in region meant that the entire marble quarry was still very much above water.

There are also children who jump down the waterfall and retrieve coins thrown in the water. Though my guide told me that this is a good income for the villagers in the area, some how the scene from movie Masaan where a child almost dies in similar game left a mark on me.

Dhuandhar falls even with low water levels is still amazing !!! The site of water from Narmada flowing into the marble rocks is unique and probable replicated no where else in India.

Dhuandhar waterfalls and the water flowing into the marble rocks 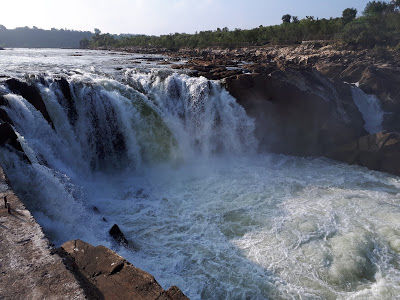 Movie Asoka with Sharukh and Kareena was shot here 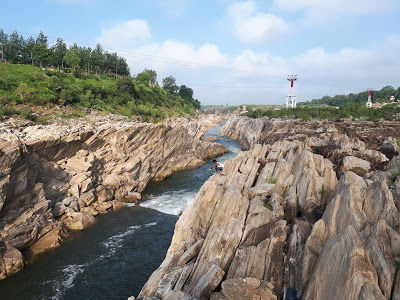 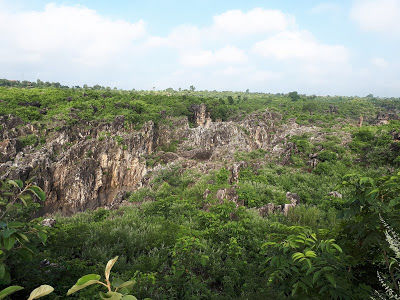 Then we headed towards the Chausasth Yogini temple about 2 km away from Dhuandhar falls.

Chausath Yogini Temple is one of the oldest heritage sites in India. It was built in the 10th Century AD by the Kalachuri kingdom and has a distinct resemblance to the temples of Khajuraho in structure.

The temple is the abode of Goddess Durga along with 64 yoginis. A Yogini is a female attendant of the mother goddess, who slays illusion with fiery passion through insight and liberation.

Though the temple has been partially damaged, it speaks greatly of the ancient dynasties that ruled in Jabalpur.

Yoginis lined up in a circle. Though many of the statues have been destroyed by invaders, there are still some which speak about the beauty of the temple 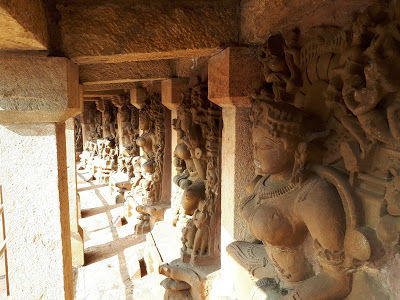 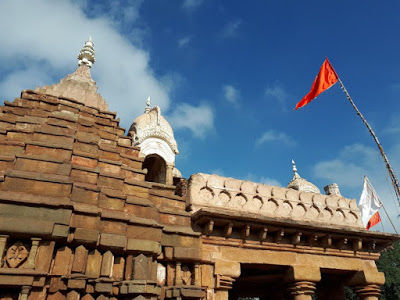 Finally we headed towards a viewing spot from where the calm waters of Narmada are visible. This is the spot where boat rides are organized for tourists. 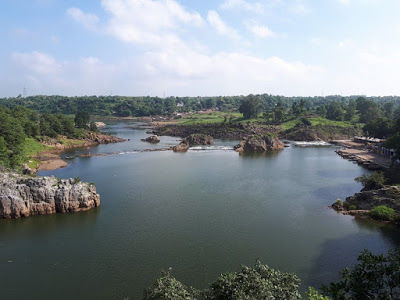 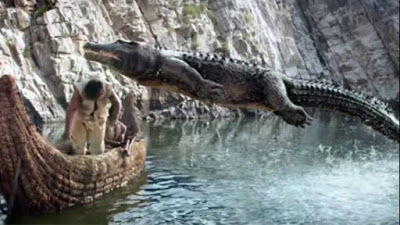 The guide tells of a funny story where people lined up to watch Hritik Roshan but his exact looking stunt double was sitting alone. Talk about Brand Value.

Do note that the best time to visit the location is November-February when the heat is manageable and the water levels have receded. You can also enjoy the ropeway and boating at the location which I decided to give a miss.

Oh and on the way home, you can also visit the balancing rock of Jabalpur.... though I would rather wish someone to help me with a self balancing bank balance :( 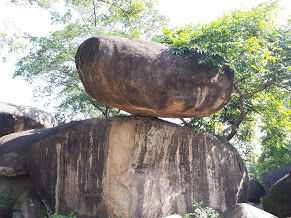 Do visit our blog www.alifeinslowmotion.com for other travel stories as well :)