Day 1/4 (Ramakona to Tamia): The calming effect of getting on to the saddle 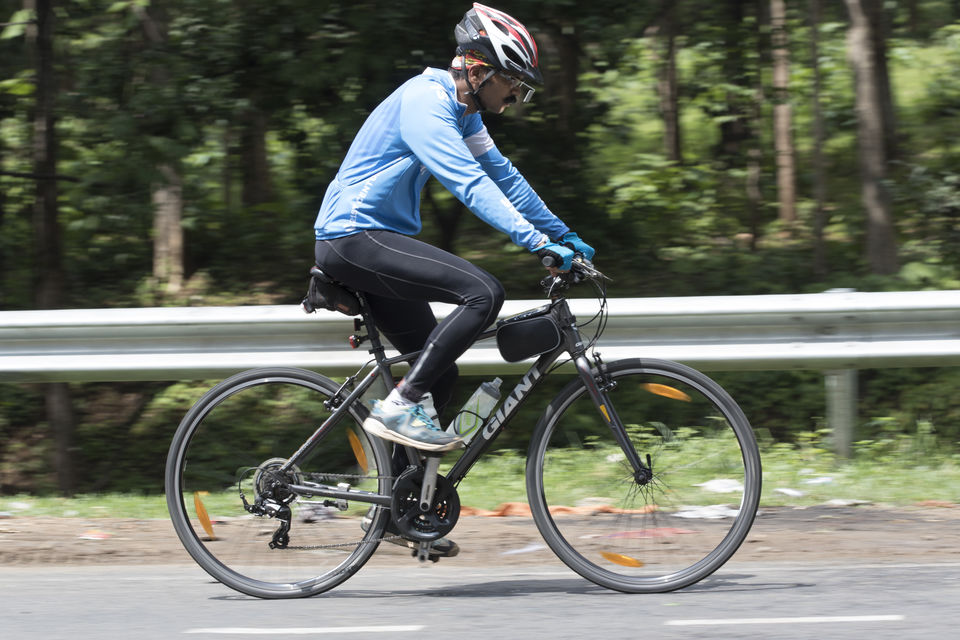 The day of the Tour had dawned and I was up by 4 am. It had been a very bad night with poor sleep and I was a nervous wreck. I had lost all confidence in self and somehow had started doubting my cycling capabilities. I almost had a panic attack (if that is the correct word) and was on the verge of calling up Sachin to withdraw from the Tour. Tea and some contemplation calmed me and with a hesitant change of mind, I was back to getting ready for the Tour albeit a bit slower.

Cycling gear on, I finally hailed an Uber to Ravi Bhawan - our gathering point for the start of the Tour. All along in the cab I had this weird feeling of dread and trepidation about my own self. Would I be able to cycle along the big shots and those on their road bikes since I was but a hybrid biker? Funnily enough, I don’t know why these self doubts had suddenly appeared. I had done a good number of brevets in the past and had never had such self-depreciating feelings ever, not even on my first Brevet!

The cabbie, considerably chatty considering the time of the morning eased me a bit. He dropped me at Ravi Bhawan and as I made my way inside the premises, I realised that I hadn’t taken out my bag from the luggage compartment. A stream of expletives to self and I was back on the road running after the cab shouting for him to stop! Since he hadn’t gone much far, I was lucky and was soon making my way back to Ravi Bhawan with luggage in tow. Somehow the day was refusing to start on a sober note!

Enroute to the starting point at Ramakona 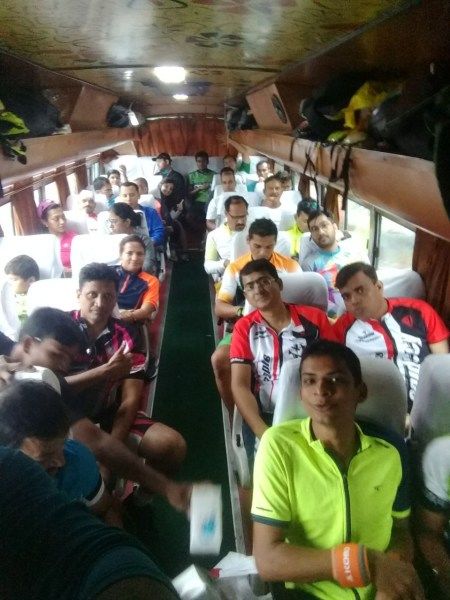 A good amount of riders had already arrived and the bus with all of us started towards Ramakona, Madhya Pradesh; our designated starting point, by about 6.45 am. Along the same time as the pleasantries were being exchanged, we were served our breakfast in the bus by the Tour’s crew.

The bikes await us at Ramakona 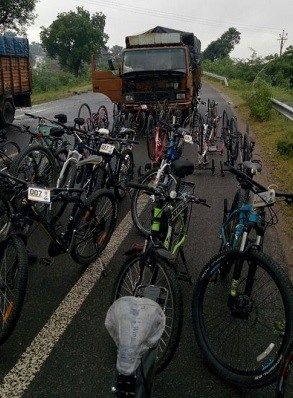 By around 9.30 am the bus reached Ramakona. Amidst the huge crowd that had gathered at the starting point, our bikes had already been unloaded by a second set of crew members. Tea served, and the ride was on..! I was perhaps the last one to ride out from the start. My legs were feeling rusty but the overall feeling now was a bit better as compared to the assessment of self I had made in the morning.

Assessing the bike's status before I start (PC: Veloscope) 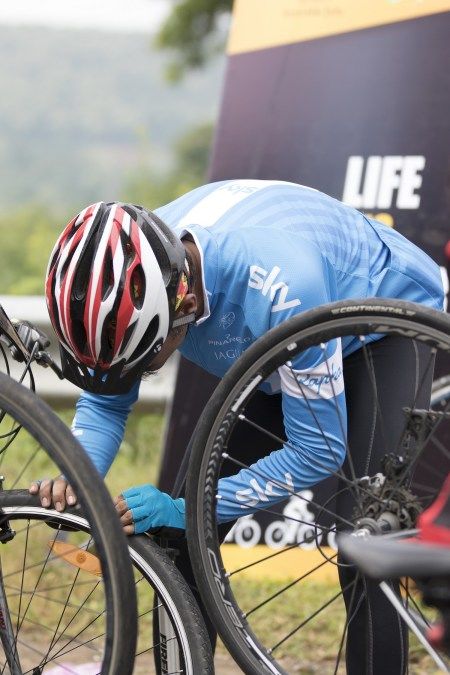 The Tour was designed such that there were to be Competitive Segments (CS) everyday. The CS were planned to be along the major climbs of the day’s ride. So as to ensure uniformity, the bikers were divided into three categories – Roadie (men), Roadie (female) and the Hybrid/MTB category. The prize for the winner of each segment was an OAKLEY!! By virtue of my bike, I happened to be in the Hybrid/MTB category. 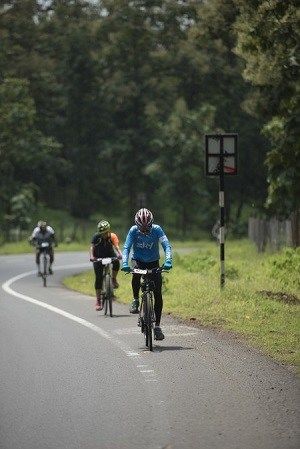 The CS for the first day was the Sillewani Ghat, scheduled to start from the Banjari Mata Mandir, a mere 8 kms from the flag off point of the Tour. Being a commuter who climbed a 1 km incline everyday to work, I knew that climbs could be my strong point. The 8 kms had warmed me up and I was by now in a better mental shape. Enroute the climb I overtook a few cyclists who had started before me and I felt a decent surge in my confidence which was at an abysmally low level in the morning. 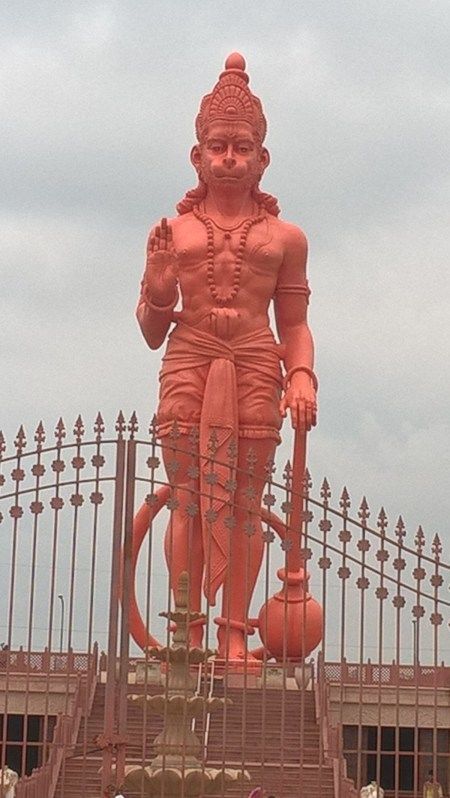 The CS spread over about 5.8 kms was soon done and after a brief munching of chikkis and biscuits –I was back on the Chhindwara road towards Parasia. The first Support Station (SS) soon came up near the Hanuman temple, 26 kms from the starting point. A brief chit-chat with fellow riders over topping up of water bottles and energy levels by munching on bananas and energy bars and I was on to the road again.

With Rider 007 aka Anubhav from Delhi 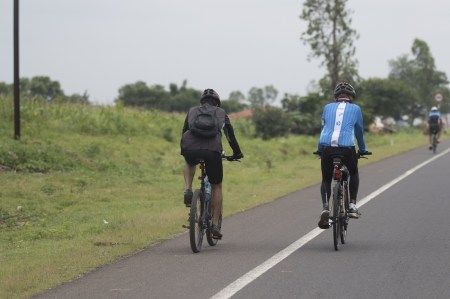 Before I took the left road leading to Satnoor, Chetan Thakur’s brother in law treated me to tea at a dhaba. I was fully rejuvenated by now and continued along further as Chetanbhai decided to linger along for some more time. The roads were smooth, pot-holes non-existent, weather a bit cloudy – all in all, a perfect environment for a ride. Here on, there was a steady but minor incline, however with eyes to feast on the maize and cauliflower fields lining both the sides of the road, it was not boring and I was getting back into my elements. Within some time I caught up with Anubhav from Delhi. Riding an MTB with the 007 rider number I found it easier to remember him by the associated screen name than his real name.

A bit of chatter with him and I decided to continue ahead when he decided to rest at the second left turn of the day. The roads were by now double laned. Traffic too had increased and the fields had given way to petrol pumps and occasional homes as Parasiya neared. The cue-sheets for the day meant that one had to take the Parasiya bypass. Roads here were a bit bumpy but pretty much ok for my hybrid. A short climb and the second SS was up and waiting. As I topped up on my water bottles, Jyoti Patel, the first SR of Central India followed by with Aamir also streaming in. 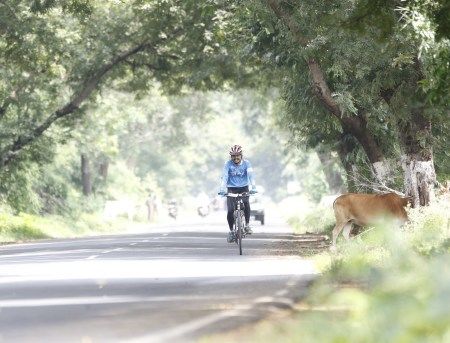 Pleasantries exchanged and I continued on to my solo sojourn. After crossing Newton Chikhli Kalan I realised that the road now had a steady climb, and, I was actually liking it! An unofficial SS set up by Pranav along the Pipariya road meant that I could top up myself with energy bars again. Smooth roads and miniscule traffic was the flavour of the afternoon. Ample greenery along the double laned roads meant that cross winds and head winds were miniscule, the only real challenge therefore being the gradient.

Our halt for the night - TheTourist Motel, Tamia 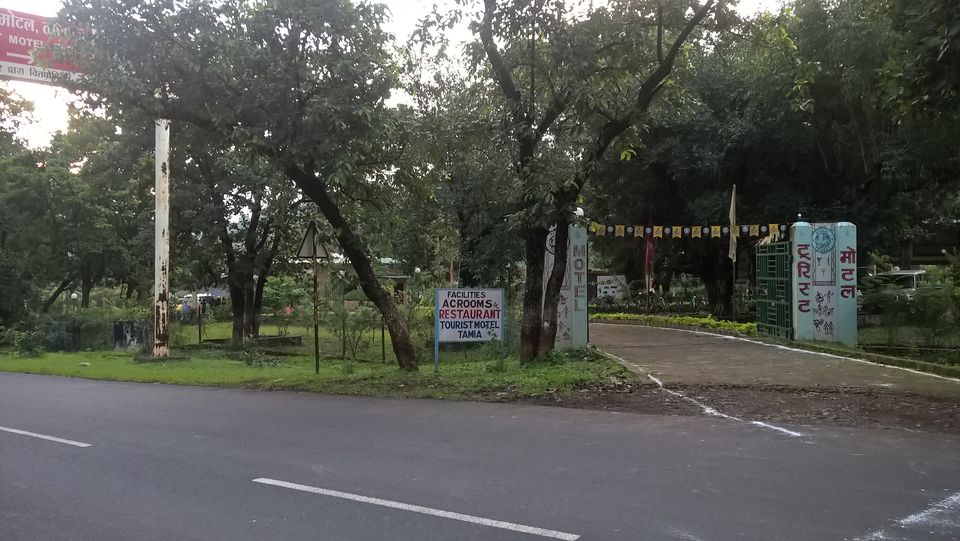 By 4 o’ clock, I managed to reach the Tourist Motel, Tamia – our end point for the day. It had been a solo ride for the most part of the day. My confidence was now back having cycled almost 94 kms with a total elevation gain of 1674 meters.

Meanwhile the Tourist Motel was already decked up for the Tour riders. There was a grand welcome for each of the rider streaming in.Plush rooms at the resort meant that the evening and the night would be comfortable as well. I was allotted rooms with the Choudhrie brothers from Beitul. 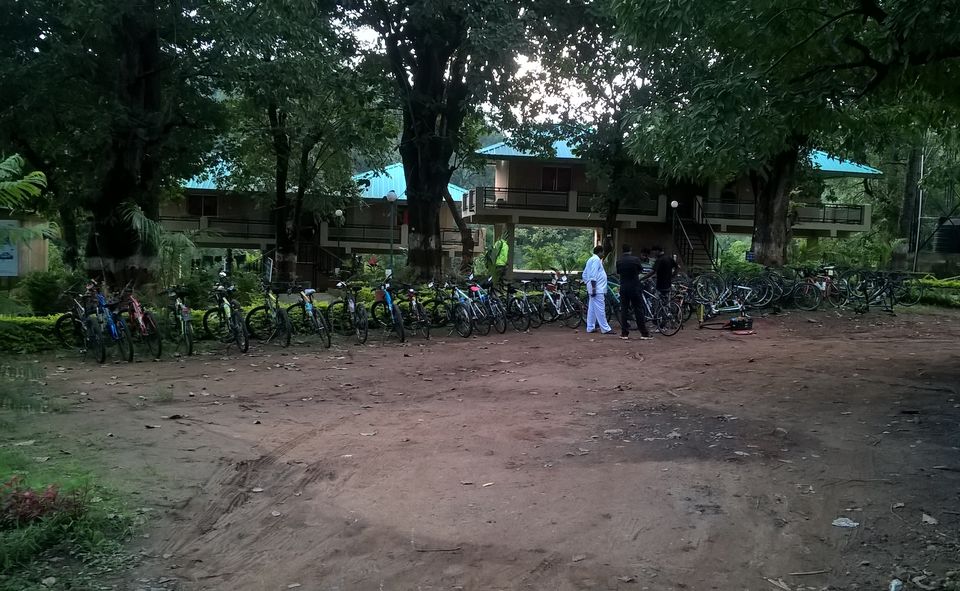 Evening was free time and I spent the same exchanging notes with my room partners. Dinner was an early affair since the next day was an early ride out. The CS standing was announced post dinner. The winner for the day in the road bike (men) category was as expected Yash. In the female category it was Aarthi from Chennai. I was the first runner up in my category and was trailing Dr Ghughe by about 74 seconds. This was music to my ears.

All of a sudden the day seemed to be ending on a much better note than what it had started with! The dread of the morning had almost disappeared after the Sillewani Ghat. But what I now had was an itch to get back on to the saddle as soon as possible.

I wanted that Oakley!!

This post has been originally published by me on my blog EnvironmentFootprints. But nevertheless I would be sharing my experience of the entire Tour here as well. Keep watching this space to know how Day 2 of the Tour De Satpura unfolded for me.