The Caves of Bhimbetka 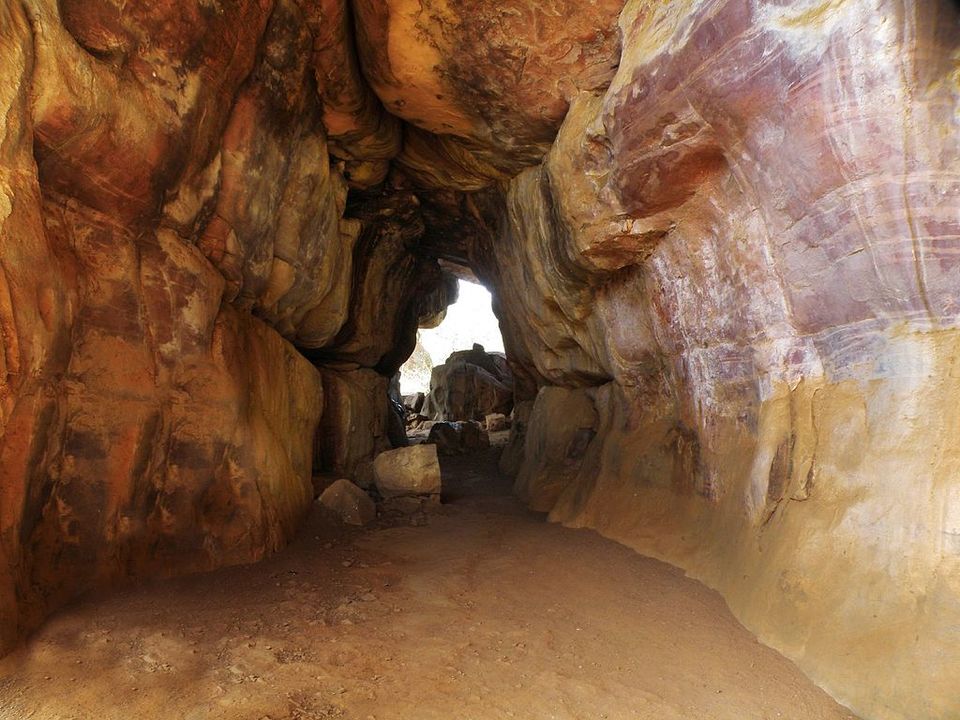 A few years ago, I was traveling with a group around Madhya Pradesh, and Bhimbetka Caves came up as one of the first sightseeing spots on the itinerary. My prior experiences tell me that caves in India are as old as civilization itself. And Bhimbetka is definitely one such destination.

From Bhopal city we rented a reliable and affordable cab to the cave site, about 45-50 Km away. It took us about an hour to reach the site. We had connected with a local professor online and had requested him to be our guide for the tour of Bhimbetka and the next few places in the state. What he told us was fascinating, intriguing, and thought-provoking, especially to me.

The huge rock shelters (as it is known) have been declared as a UNESCO World Heritage Site considering its significance to the history of Indian Civilization. One of the biggest and oldest cave systems of the world, the Bhimbetka Caves are said to have recorded (and witnessed) more than 700,000 years of human history! And most interestingly, these caves are not just India’s pride and joy, but are known around the world as some of the oldest sources of petroglyphs and prehistoric cave paintings. Interestingly, there also happen to be mythological references to this site along with its historic and geographical importance. It is believed that during the Mahabharata, Bheema took shelter in these caves when the Pandavas were on exile.

Bhimbetka evolved into a network of hundreds of caves and rock shelters nearly 100,000 years ago. There were at least 760 such caves in the entire region of Bhopal, including sites like Vinayaka, Bhonrawali, Bhimbetka, Lakha Juar (east and west), Jhondra and Muni Babaki Pahari, each with a cluster of such shelters. Of all, Bhimbetka itself houses 243 caves. But of course, it was not humanly possible for us (or anybody for that matter) to explore them all. Nor are all these sites accessible to visitors. So, in short, there were only 12 or 15 caves that we could visit.

We started our tour with the ‘Auditorium Cave’. At first, I had thought that perhaps a cave had been turned into an auditorium for visitors. But when we reached there, I realized why and how it had gotten its name. This was an expansive site guarded by towers of quartz and sandstone, rendering a very ‘cathedral-like’ ambience. At the center of the entrance lay a huge boulder, like the seat of a king or a ruler. It might have been a ‘meeting place’ in those days when people actually lived here.

We continued our walk as the professor shared his knowledge of different periods of human evolution that these caves had witnessed and recorded.

Some of the smaller caves had remains of Buddhist Temples that would probably date back to the 11th or 12th century. Others had wall paintings and petroglyphs carved on stones. Although thousands of years have passed, these traces of early life have not faded. And of course, thanks to our archeological department, standing in the 21st century, we still have the privilege to experience these first-hand.

Most of the cave paintings dealt with themes of daily chores, the culture of that time, and so on. For instance, there was a painting of a man with a bull and a plow. Another painting depicted a herd of what seemed like horses or cows. This illustrates that farming was a common practice, or perhaps the technique had just been invented and the artists wanted to document it. What surprised me the most was the colors that they had used! Although faded, one could still figure the red, black, yellow, and greenish tints. We identified them as vegetable dies (another instance of agriculture). Because the paintings were done deep inside the caves, they had been protected from the elements.

Pictures indeed speak a thousand words, even if those words are a thousand years old.

Hopping from one cave to the other, exploring the dark niches, I remembered the first time I had ever seen a cave. I was barely 10 years old and was completely spooked. I did not see a cave for years after that. But as I grew older and started traveling, I grew curious about these deep mysteries of the terrestrial world that seemed to extend into the very bowels of the earth. Come to think about it, these hidden chambers within rocks were exactly where early humans would live!

Whether they are naturally formed or carved by humans, caves always have a story to tell. Of the people who took shelter and the times that passed by. And for all I know, my ancestors and predecessors too might have taken solace in the safe and dark depths of these natural shelters!