Walking along a stone path laid a thousand years ago, I wondered about the commerce, the warfare and cultural exchanges that may have happened on the roads that I tread. Lonavala to Bhimashankar ( Lo-Bhi ), a trek along the ancient trade route, is a gem of a range trek in Sahayadris that forced me to ponder over the history of this region beyond the exploits of Marathas, Mughals, and the Britishers. It is a long endurance trek wherein we covered over 65 Km in less than 40 hours and with 8-9 hours of sleep. The trek does test your endurance, but in return, it offers the best of Sahayadris - Waterfalls, meandering jungle trails, steep ascends, slippery descents, flowering plateaus and what not.

Lonavala to Bhimashankar (Lo-Bhi) Range trek is part of the ancient trade route that starts in Poona, follows the Ahmednagar range of the Sahayaris and reaches the plateau of Golconda. The route follows the river Bhima and proceeds until the confluence of River Krishna and Bhima. From there it continues to the eastern point of Krishna and Tungabhadra, crosses the eastern ghats and reaches the sea in the Bay of Bengal. The trade route was used mainly for commerce to transport goods from the various ports in Western India viz. Kalyan, Vasai and Surat to Eastern India and abroad. Even today, in some parts one can clearly see the stone laid route in the jungles

We started our trek at 2:30 am in the night from Lonavala station. Our trek leader - Vikram - made it clear at the beginning that we were embarking on an endurance trek, and everyone will have to stick with the group's pace and finish the trek in the designated time. We were happy to comply, but the scorching pace set by Vikram took us by surprise. Everyone is the group was a seasoned trekker, as was clearly evident from the wear and tear of their Action Trekking shoes - The best trekking shoes for Sahayadris. We knew, we had to up our game. Our enemies for the trek would be my heavy backpack and Bhavini's shoe bytes. We were well prepared for the shoe bites, as we carried sufficient masking tape and sponge to reduce the friction. We are happy to report, that our plan worked and she got away with bare minimum shoe bites from the trek. 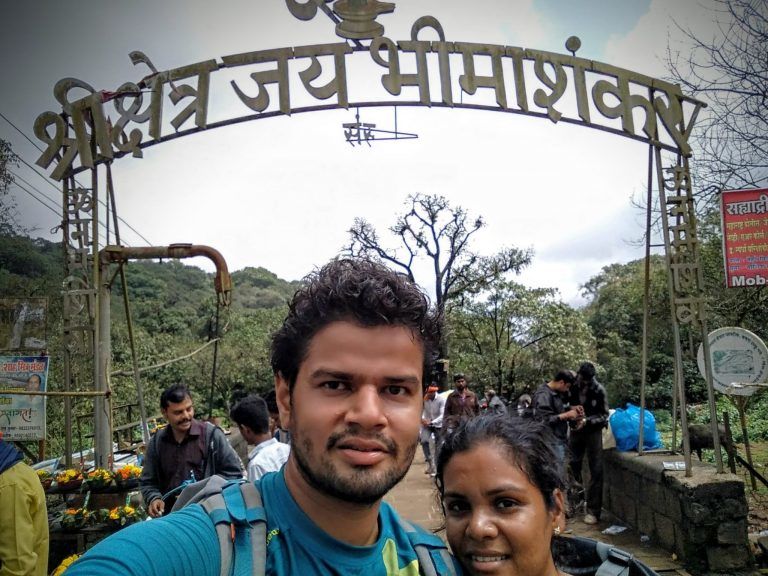 The trail begins along the route to Rajmachi from Lonavala. We had been on this route a few months back during our solo night trek to Rajmachi, hence we were familiar with the trail until Jambhavli phata. Since we were walking in the dead of the night, and that too on a new moon day we could hardly see anything apart from what our torches illuminated in front of us. But nature has its own way to break the dark of the night. In this instance, its weapon of choice were the fireflies, and they were beautiful. Little sparks of light randomly illuminating and disappearing around us. I walked, trying to spot as many as I could but our torch lights betrayed us. Soon we came up to the Jambhavli phata from where we turned right to proceed to Valvand - our stop for the night.

We reached Udhewadi village at 5 am. The 11 Km long walk wore us out, and we were ready to hit the sack. The morning alarm for breakfast was at 6:30, so we hardly had an hour of sleep. That precious hour was interjected with murmurs, snores, heavy rains and thick fog. When the bell rang, we woke up and munched on homemade Parathas prepared by Shilpa - our co-lead. We washed them down with a cup of tea and were ready to hit the road just after 7.

Trees along the Lo-Bhi Trek 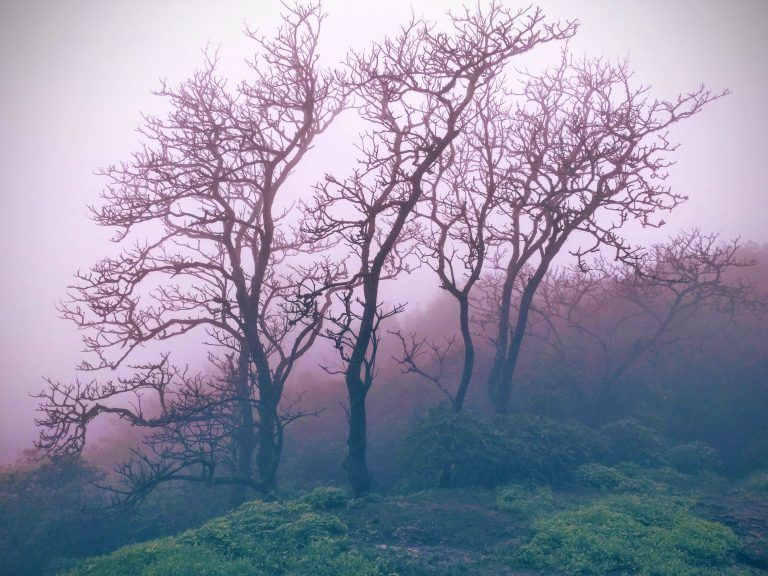 After the initial climb, we came upon a canal and walked along its wall that was lined with beautiful flowers. We crossed a small waterfall and continued the ascent. Soon we were up and walking along a traverse. To our left, we should be seeing Dhak, but thick fog surrounded us throughout the morning, robbing us off any views. After halting for some time, at the top, we started our descend into the jungle. It was slippery and many fell. We got into the jungle, dodged the low lying branches and headed towards the direction of Dhak. Soon, there is a bifurcation in the trail and a clear marking that indicates the direction to Bhimashankar. We turn right. Here the ancient trade route can be seen clearly as we spot the stones that make the road extensively in this patch.

Soon we reached Kusur plateau that was green in all directions as far as the eye could see. From here, the plan was to reach Dhangarwadi and halt for lunch at a villager's house. However, due to fog we were unable to spot the iron pole/electricity tower that pointed in the right direction. As a result, we were lost in this vast expanse of land. Weighed down by a heavy rucksack, I wished to stop for lunch. But we were unable to find the villager's house where we had intended to stop. Luckily, we found another gracious villager who allowed us to have lunch in his house. We devoured our pack lunches in his hut, and then enjoyed many glasses of buttermilk made by the villager's family. 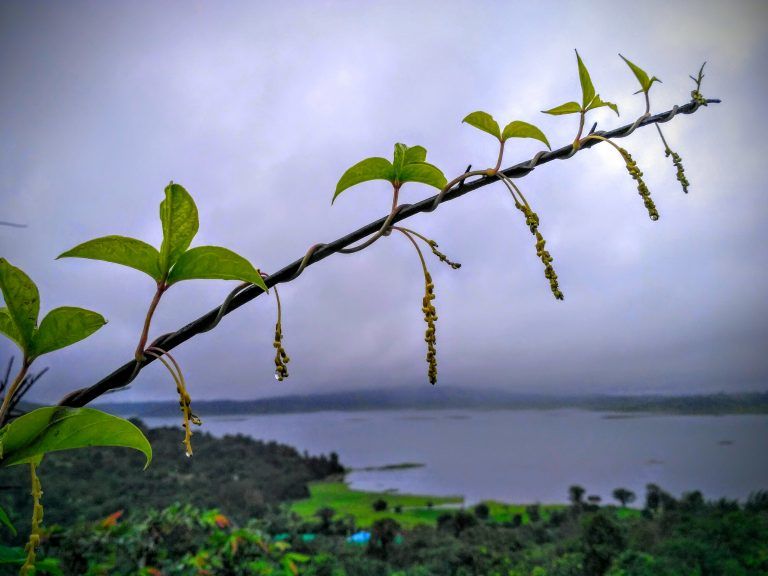 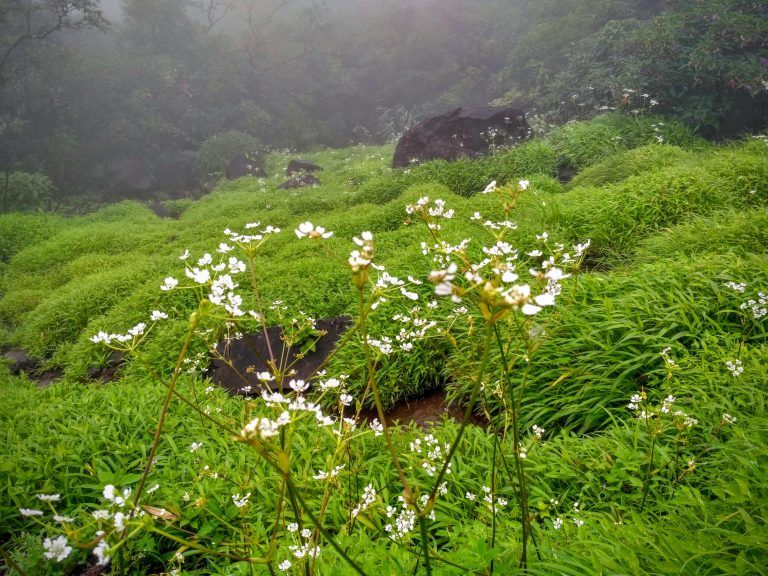 The plan was to reach Padharwadi for dinner and night stay. But we would have to trek for another 3 hours to reach. As a result, everyone made a run from Talpewadi. The trail was mostly flat and passed through the jungle. We could very easily keep pace with the group. On the way, we came across a huge waterfall. We filled up our water bottles, took selfies and dashed full speed towards Padharwadi. By 7 we had made the final ascend, but for the descent, we would have to do it in the dark. With my brass torch, that was hardly an issue and we made it down until Padharwadi by 8 pm in the night.

We woke up around 6 in the morning. I had slept like a baby in the night and was fully rested. We had breakfast, tea, and another round of group selfies before leaving at 7:30 in the morning. Today the trek was supposed to be easy, and we were to reach Bhimashankar by 2pm. The group's pace was slow and our moods jolly. The sun was up in the sky, and unlike yesterday it wasn't raining. We crossed the village and had gradual ascents and jungle trails until we reached the ghost plateau. It's called so as it is a hunting ground for the villagers, who hide inside rock pyramids to hunt animals. We stopped here and feasted on biscuits, cakes and wafers.

We continued and made our way, and somewhere at crab plateau we again lost our way. However, this time, we found a nice shortcut until the Bhima river, that cut down a few kilometers from our long trek. With wet feet, and drenched shoes we made our way to Kamaljai Temple plateau. There we halted and Vikram made tons of Bhel, which we all enjoyed at this beautiful location in the middle of nowhere in the Sahayadris. It's these moments that bring us back to the mountains.

Plastics dumped in the Bhima River near Bhimashankar 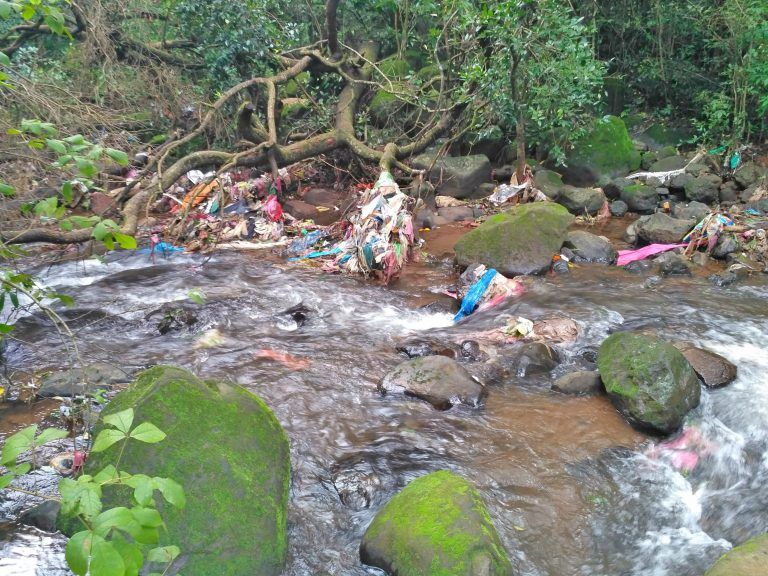 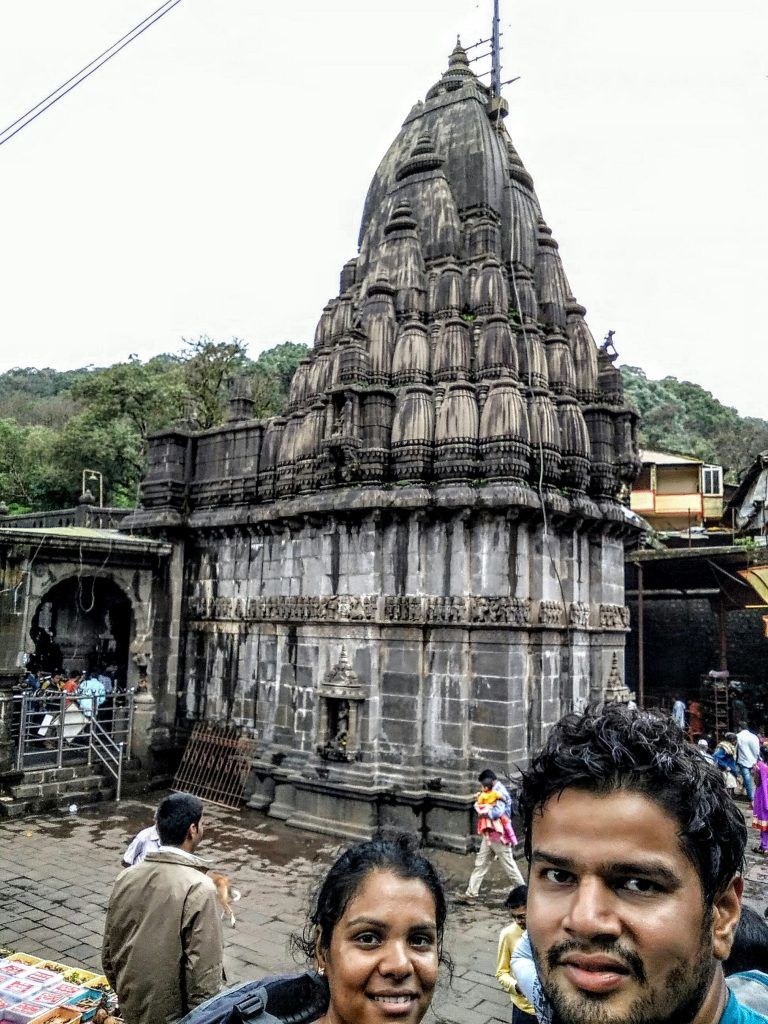 Feeling energized post lunch, I was raring to go. Bhavini took some weight off my backpack, and the backpack became bearable. Since we had deviated from the original trek route, we would now be getting down at a village different from Kusur. We started the descend, and it was quite steep and slippery due to the non-stop rains. However, hand in hand, Bhavini and I successfully navigated its treacherous slopes and made it down to the Thokarwadi Dam without a scratch. A private vehicle was planned to take us until Talpewadi from Kusur village, however, since we came at a different village we were stranded on the road. But the halt on the roads of Kamre village were a great relief for my back and Bhavini's feet. After some drama to find a vehicle, we got an ST bus that dropped us to Khandi village. From there, we took a private vehicle to Talpewadi and it was already 5 in the evening. 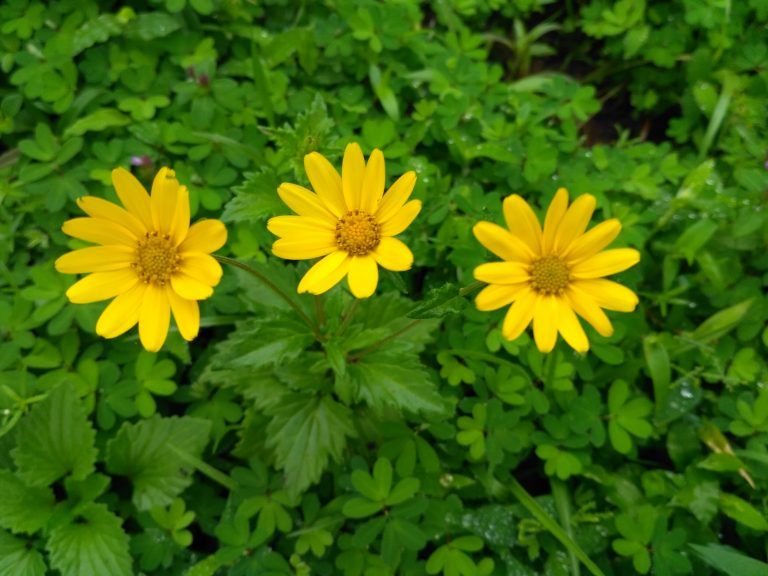 We had walked continuously since last night with only two big breaks, so reaching the house was a relief. I got out of my shoes, and my feet were ghostly white and wrinkled up due to the water in the shoes. We had a delicious dinner at the house we stayed, and by 10 I was off to sleep.

We had another 4 Kms remaining until we reached Bhimashankar, and after a couple more river crossings, we were soon on the main route that villagers and other devotees take to the Jyotirling. Someone spotted the Indian Giant squirrel - The state animal of Maharashtra. We all strained our necks and caught a glimpse of this beautiful squirrel posing on top for us. We kept walking, and soon realized how near we were to the temple by seeing the plastics and other wastes that clogged the rivers and surroundings. It wasn't a pleasant sight to see. Finally, walking past the muck and plastics we reached the Bhimashankar temple.

Undoubtedly, the journey was more beautiful than the destination. We walked out of the temple premises and had lunch before heading back to Pune directly from Bhimashankar.

If you plan to trek the Lo-Bhi you should check Wikimapia for the detailed route. The highlights of the route are as below:

Along the Jungle trail to Bhimashankar 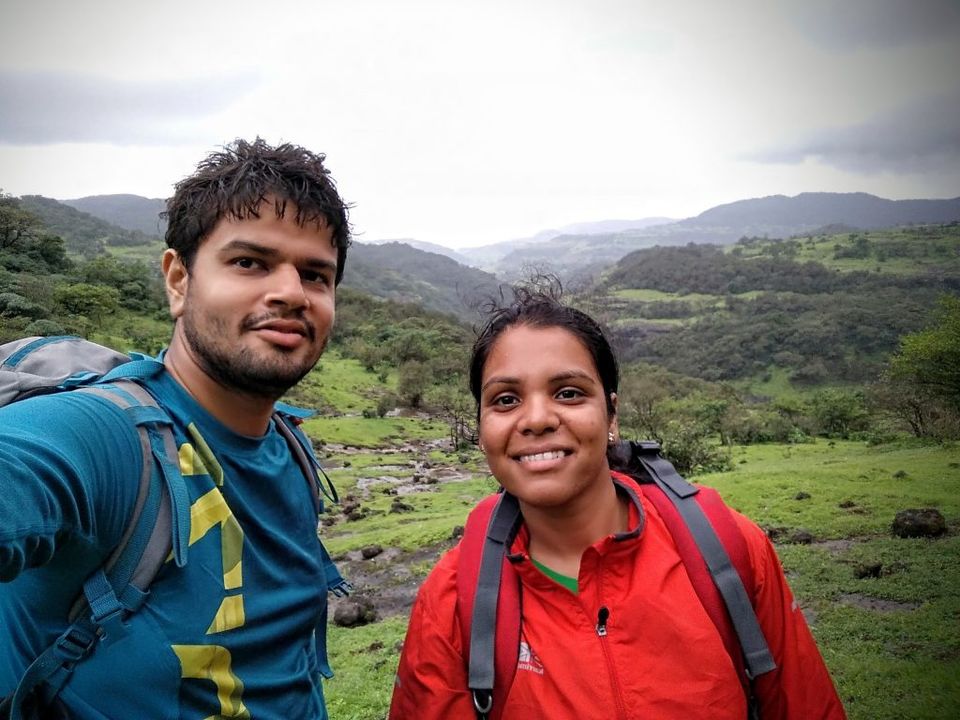