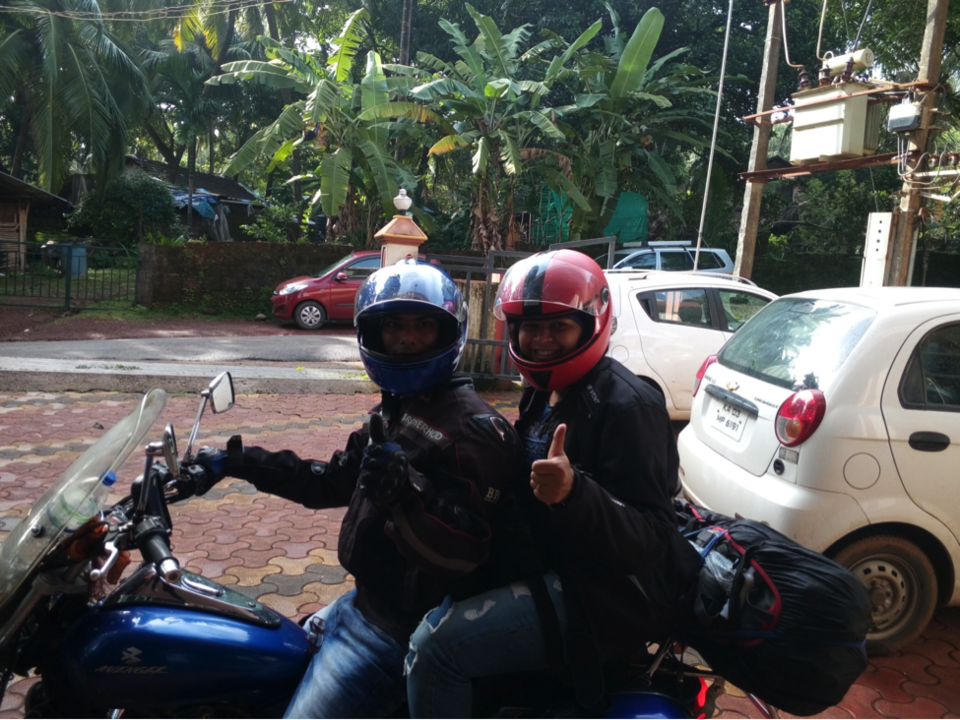 We were searching for a place where we can go during 15th August extended weekend in Maharashtra and which can be covered in 3 days. We had heard a lot about Ajanta, Ellora caves so zeroed down to that for a bike road trip.

Tourist information for transportation: MSRTC Red Buses are available at regular intervals from Central Bus Stand to the important tourist destinations from Aurangabad like Ajanta, Ellora, Daulatabad, etc. The frequency is good, safe and fairly comfortable though not very luxurious. Auto rickshaw drivers may ask for exorbitant rates from the tourists. Make sure to ask before boarding, if the charges are based on the meter reading. In general, public transport in and around the city is fairly good.

TRAVELLERS GUIDE: We were very excited for these world heritage sites – Ajanta and Ellora. It was our first long ride so I could not sleep well whole night and started early while it was drizzling outside. Pune to Aurangabad distance is 250 km and roads are very nice. I was riding almost at 80 -100 kph. We had breakfast in midway and continued our journey. Within 4 hours, we reached Aurangabad. Initially, we had decided to find a place for stay but we decided to visit Daultabad Fort, Ellora caves first. Daulatabad is a 14th-century fort and was originally named Devagiri. The fort is located on the top of a hill. Chand Minar, Chini Mahal, and Baradari are must see structures inside the fort. Don’t miss the climb to the very top through the bat cave. The cave is quite scary and stinky due to bats. We spend good 3 hours there and then headed towards Ellora caves which are 13 km away from Daulatabad fort.

As we saw the Ellora caves panoramic view, it was like wow! There are around 30+ caves to visit! These caves consist of 12 Buddhist (caves 1–12), 17 Hindu (caves 13–29) and 5 Jain (caves 30–34) caves. Few of the very famous caves in Ellora are “Vishwakarma cave” (cave 10), tantric Buddhist goddesses are carved in cave 12. Largest single monolithic rock excavation in the world dedicated to “SHIVA” named Kailash temple (Cave-16) and Goddess Ganga at the entrance of Ellora Cave 21.You have to walk quite a lot to visit all the caves. We got so tired while we had just covered 20 out of 34.

Entry Open from sunrise to sunset and Closed on Tuesday.

The paintings on the cieling and walls depict lot of stories, incidents. Many of them are quite damaged due to negligence I believe. The weather can be dramatic too in the deccan plateau. With lots of rainfall for good 3 – 4 months, preservation can be little tricky. But we did saw restoration work going on in lots of caves. They have installed nets everywhere so that bats can’t enter inside

It was 3:30 pm and near to Ellora caves there is one Shiva’s temple named “Ghrishneshwara” which is also one of the 12 Jyotirlinga shrines. I had heard a lot about this temple. A few years back they have allowed women to visit the main temple but still, females cannot touch the main “Shiva linga”. This temple is an illustration of south Indian temple architectural style and structure. It was fully crowded and we waited for two hours for our turn to get inside the main temple. Males have to remove their upper clothes, without this, you cannot enter in main premises. After darshan, we were very tired due to traveling and site seeing. We decided to go back to Aurangabad to find a place for stay. We enquired few hotels for stay. We found a good place but surprisingly he asked us to show married certificate or an id proof where my spouse last name matched with my last name. After a good warm discussion, we left that place and settled in another nearby hotel. Hotels are not very costly here in 1000 Rs you can get a good place for stay.

Now it was time to taste the local food. In our list, one of them was “Gayatri chat bandhar” at Gulmandi road near Kranti chowk which is very famous to serve excellent deep fried snacks like Kachoris, Samosas and Mong bhajji. Hot and freshly prepared in front of you on a ‘Chulha’ (clay oven). Kranti Chowk and Gulmandi are the oldest road side eateries in the town. You will found many other eating joints here Bikaner bhujiyavala, Omkar pav bhaji, Indian grilled chicken varieties like Chicken Tikka, Tandoori, Kebabs, etc. at Connaught Gardens. There are plenty of veg, non-veg and multi cuisine restaurant available for lunch and dinner at Nirala bazaar and Jalna road.

Next day morning, we started early as we wanted to reach Ajanta caves by sharp 9 am which is 100 km away from Aurangabad city center. The roads were too bad, it took me almost 3 hours to ride 100 km but still, we managed to reach at 10 am. At one place you have to park your vehicle and from there you will get special CNG bus. That bus will drop you near to the caves. Considering, these caves have very exotic paintings; the management wants to keep the pollution at minimal. It was short bus ride between few mountains.

As per our experience with Ellora, we were prepared that we will have to walk a lot and our thought was correct. We found Ajanta tougher than Ellora. There are 29 caves in Ajanta caves. Ajanta caves include paintings and rock cut sculptures which describe finest examples of ancient Indian art. At Ajanta, the paintings on the walls, illustrate the events in the life of Prince Gautama Buddha, the founder of Buddhism and in the more popular Jatakas stories pertaining to Buddha’s previous incarnation. Colors used for the wall paintings were made from pebbles and vegetable found on the hillside. The guide will show you the pebbles of different Colors, these were crushed and ground and the mixed with glue. The main colors used were; red ochre, yellow ochre, brown ochre, lamp black, white and blue.

Various incidents from the life of Gautam Buddha and the Jataka Tales are represented and recreated on the walls of these caves. Scenes from the royal court of the respective eras are also painted.Through his life, Buddha was against the idea of sculpting and painting images of him. However, after Buddha’s death, his followers who wanted to worship him, decided to paint his images so that they had something to hold on to while spreading the faith and teachings of the Buddha. At the entrance of the first of Ajanta caves, you will be greeted by a tall image of the Buddha. The doorway to the cave is decorated with auspicious motifs and the cave has numerous sculptures and paintings of Bodhisattvas Padmapani and Vajrapani, carvings of princesses, lovers, maids and dancing girls; scenes depicting the Persian Embassy, Golden Geese, Pink Elephants and Bull Fights. Though the caves are over 2,000 years old, the Buddha statues had been added close 600 years later.

Caves 9, 10, 12, 13 and 15A belongs to the tradition of Buddhism and Caves 19, 26, and 29 are grihas, the rest viharas (where a large number of devotees can rest) and other caves are extensions to the tradition of Buddhism. Notable point – You cannot use direct flash from the camera or mobile to capture paintings or colored carvings. It is guided there and in every cave, you will see a person to guide you on this. They have special lights installed in the caves which I believe not harmful to the exotic interiors.

There are lots of eating joints and shops selling handicrafts in Ajanta near to the parking areas so you can have your lunch. An MTDC resort is also very close by the Ajanta caves. There are many other small restaurants and dhabas available on the way to Aurangabad. People who are interested in most famous paithan silk saris (Saris which have embroidered gold or silver borders and peacocks) can visit on the way outlets or they can visit a place called Paithan which is 35 km from Aurangabad.

So by 3 pm, we were back to the Aurangabad main town and after an hour of rest we decided to visit “Bibi ka Maqbara” which is known as a poor man’s “Taj Mahal”. At first site, it looks like a copy of “Taj mahal” although it’s not as beautiful as “Taj Mahal” while the structure almost match. Bibi-Ka-Maqbara is a beautiful monument of Dilras Banu Begum, the wife of the Mughal Emperor Aurangzeb.This monument has constructed by Prince Azam Shah in memory of his mother in 1600 centuries. This monument is in the typical Mughal Char-Bagh pattern which adorns its beauty and splendor through its symmetry and excellent garden layout. The half structure of this monument has used Marbel stone and other recesses are divided by pilasters, crowned with small minarets. Hence it’s a poor copy of “Taj Mahal”. If you have seen Taj Mahal already, you can observe a striking difference between the two.

The main entrance gate is beautifully carved and has a photogenic design. After passing through the entrance, a small tank is provided and a low profile screen wall leads to the main structure. The screened pathway has a series of fountains at its center, which adds to further the serene atmosphere. Bibi Ka Maqbara has featured in a number of documentaries and films as well. We would suggest to include this monument as a must visit place after Ajanta, Ellora.

There are two other sites (Mahesmahal and Lonar) in 100 -150 km distance from Aurangabad which we did not complete due to the time duration. But if you have one day more, you may include these spots as well. This 3-day road journey was very satisfying since we got to experience and see lots of different places. A fort, tons of UNESCO caves, a temple, a mausoleum. With lots of memories and aching feet, we came back to Pune next day to get back to our corporate lives.