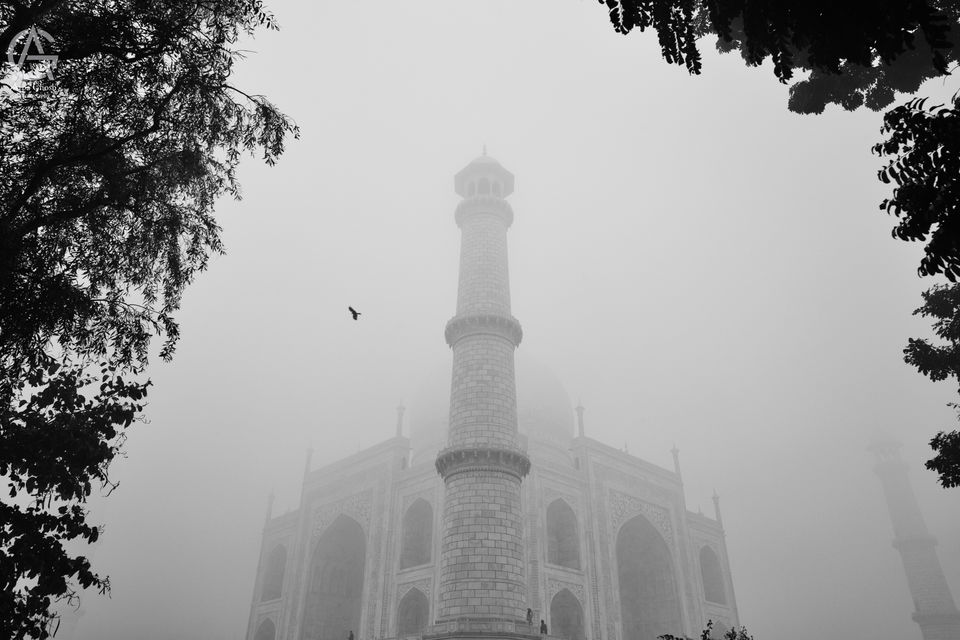 From very childhood, I have seen various glimpses of Taj Mahal, in books , televisions , printed media. So visiting the most sought after place in India was always on top my bucket list. As a travel photographer, I always do my research early. Various images of Taj Mahal on different social platform, gives a virtual tour of the iconic monument. This effectively helps in framing images and keeps me well prepared about what to expect.

So Agra was essentially a part of our "Golden Triangle" trip, which we had last December. I was touring with my family. We had two full days allocated for exploring Agra (including Mathura). We stayed at hotel Atithi, which happened to be around 2 km from Taj Mahal. The hotel was decent, but overpriced for the services they offered. Also it happened to be peak season! My aim was to visit Taj, early in the morning. It was 28 December, 2019. I woke up around 4:30 am in the morning. It was terribly cold. Temperature was around 2-3 deg Celsius. My camera bag was already packed and ready. All I had to do was to wear four layers of clothes. That's it!

Luckily I found an Uber, and it arrived in no time. From hotel, to the East Gate drop off point, it hardly took 15 minutes. It was densely foggy night (err day! whatever). The driver was polite and he dropped me somewhere near the eastern gate. Once I left the cab, all I could see a beautifully lit concrete path, devoid of human presence. Occasionally, battery cars passed by, filled with tourists, who too were eager to have a glimpse of the "architectural marvel" at the break of dawn. 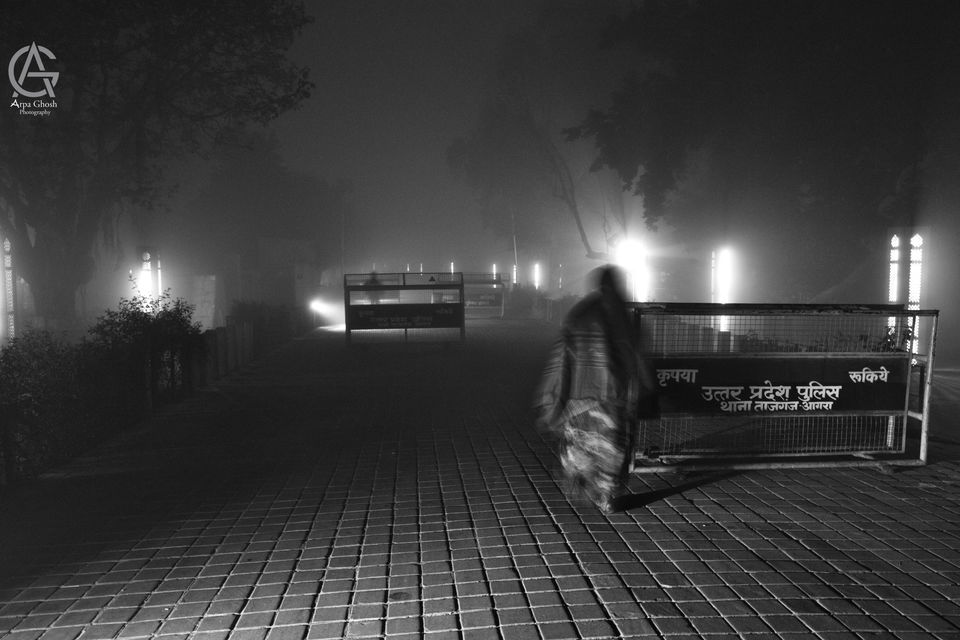 I had already my booked my entry ticket online. So no wasting time in the queue (although there was none!). I walked passed a CCD, which had few foreigners sipping hot cuppa! I don't prefer hot liquids early in the morning, especially when touring (for obvious reasons!) . So I had to deter myself, from grabbing a cappuccino!

A lot can happen over Coffee 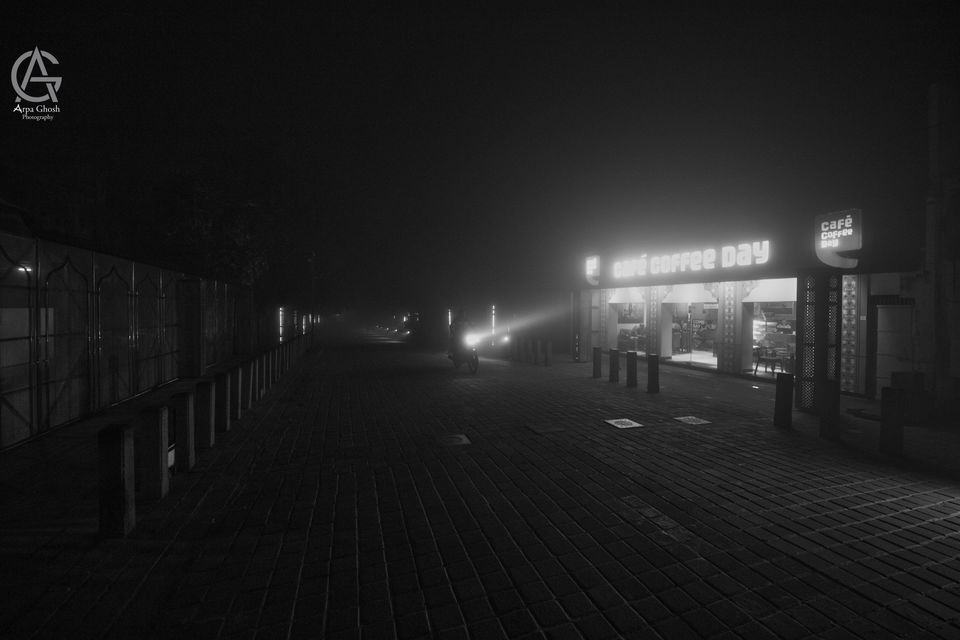 There were hardly 15 odd people queued up at the gate, and most of them were foreigners. A guard said that the gate would open at 6:45 am. I had to almost wait for 40 odd minutes, with the hope , that the fog would clear up, and will get to see the Taj in crimson red hues of the morning Sun. 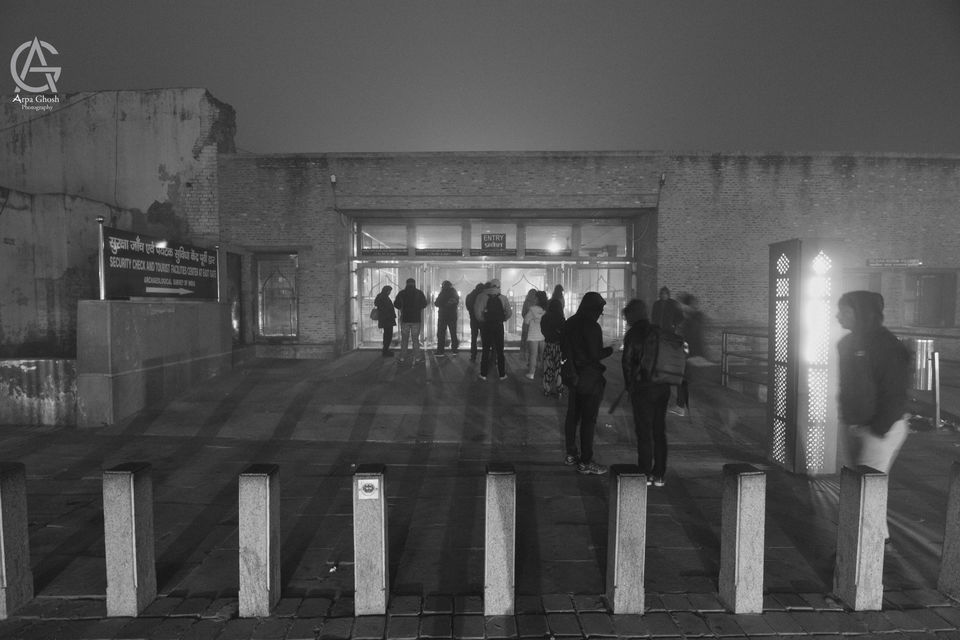 The guards were pretty punctual, and the gates opened up at 6:45 am sharp. It was still dark and foggy. The security check went smoothly and I walked at brisk pace. I was excited and hopeful. I could see few shadows making there way to the monument, alongside me. Few of them were with guides. Few people joined from West Gate. It was a magical ambiance outside the "Great Gate" . 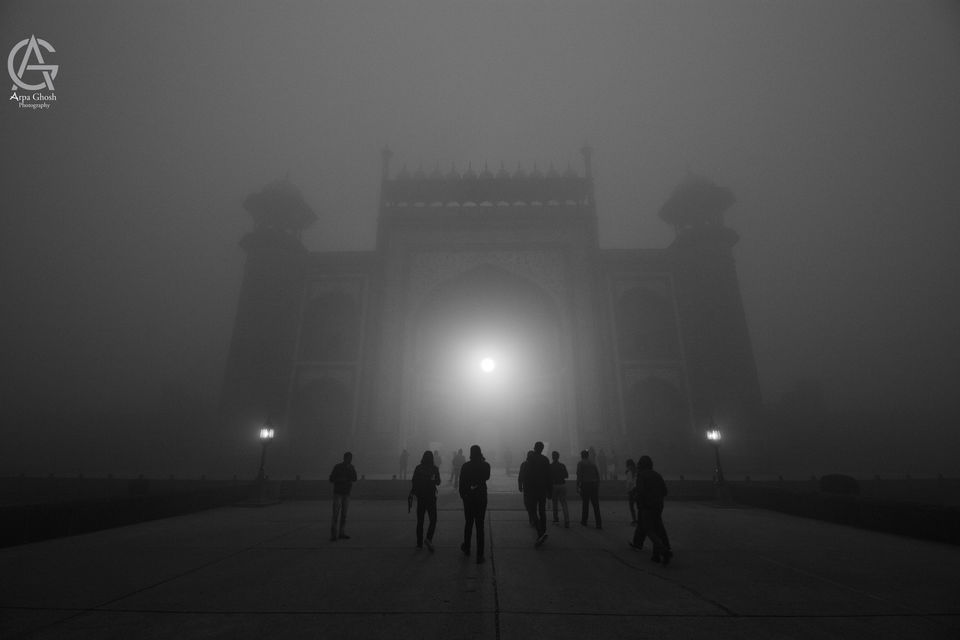 Once I crossed the "Great Gate", I was expecting to catch a glimpse of the Octagonal Wonder. But all I saw, was void. 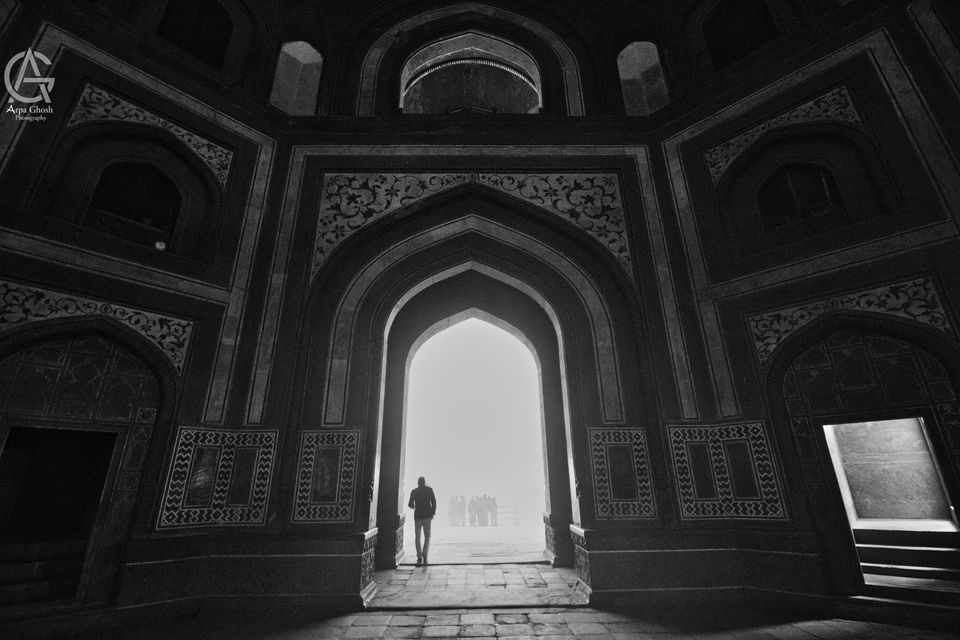 It was not exactly dark, there was a hint of light in the sky. But unfortunately, it was a foggy (or smoggy) morning. That's it! All my plans (read frames), went for a toss. 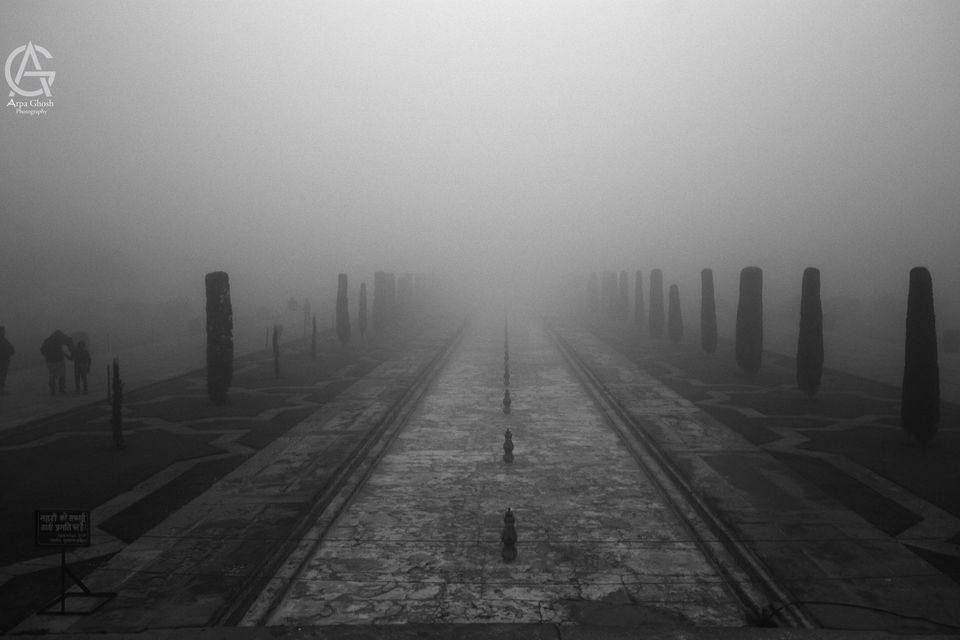 With only two days at Agra, one morning show was flop. But there was no backing out, no moment to be wasted, with the camera in my hand I started my eternal journey to discover Taj Mahal (literally! ), amidst the fog.

Mandatory clicks( With or without Taj) 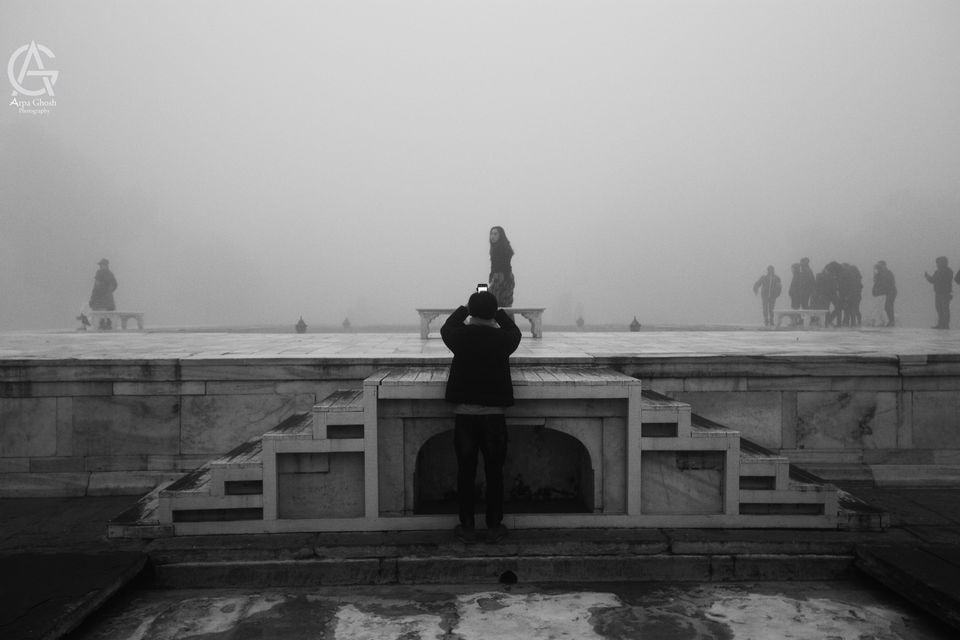 It took me almost 10 minutes, to reach the monument wall. Standing right in front of Taj, I could not see its dome. That's how dense the fog was! Anything that you can't see clearly, adds a mystery to it. So was Taj!

Moment of a Lifetime 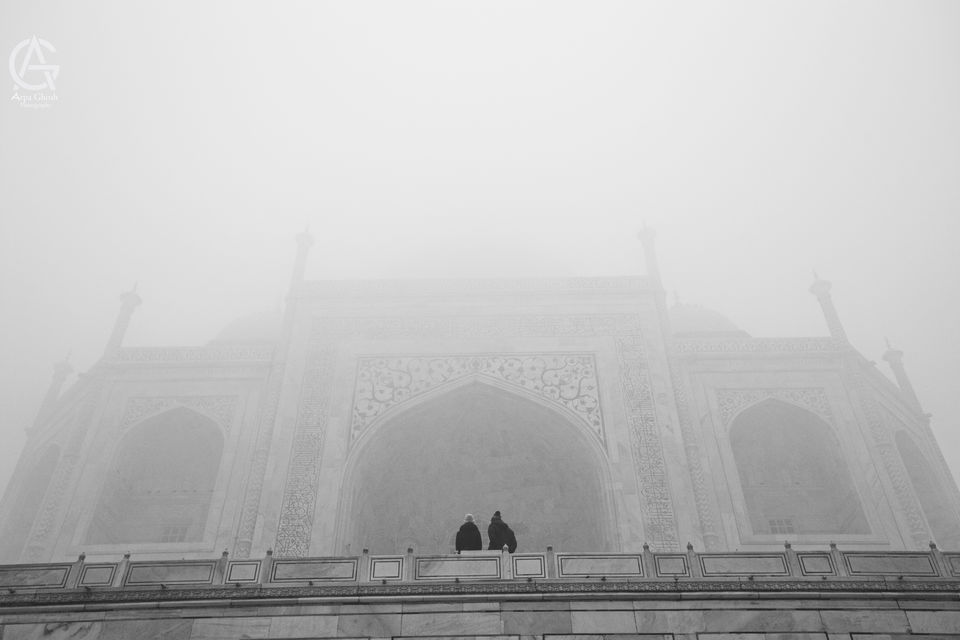 It was a surreal experience. Experiencing that place with hardly 40 odd people around, is one of a kind. 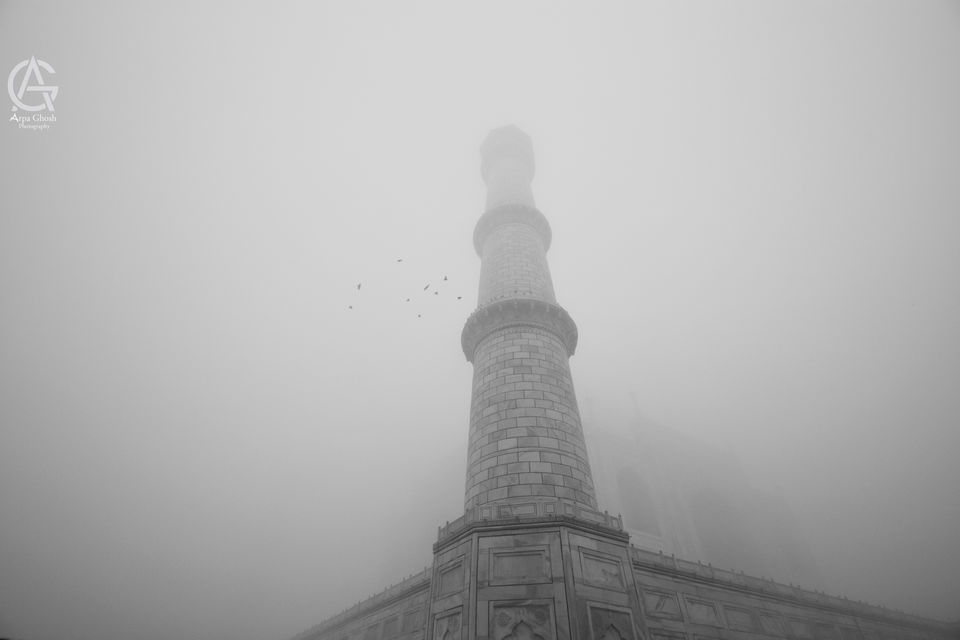 The crowd was sparse, and the huge "Kau Ban Mosque" on one side and "Mehmaan Khana" on the other , were totally deserted.

Few foreign tourists , having a stroll at Kau Ban Mosque 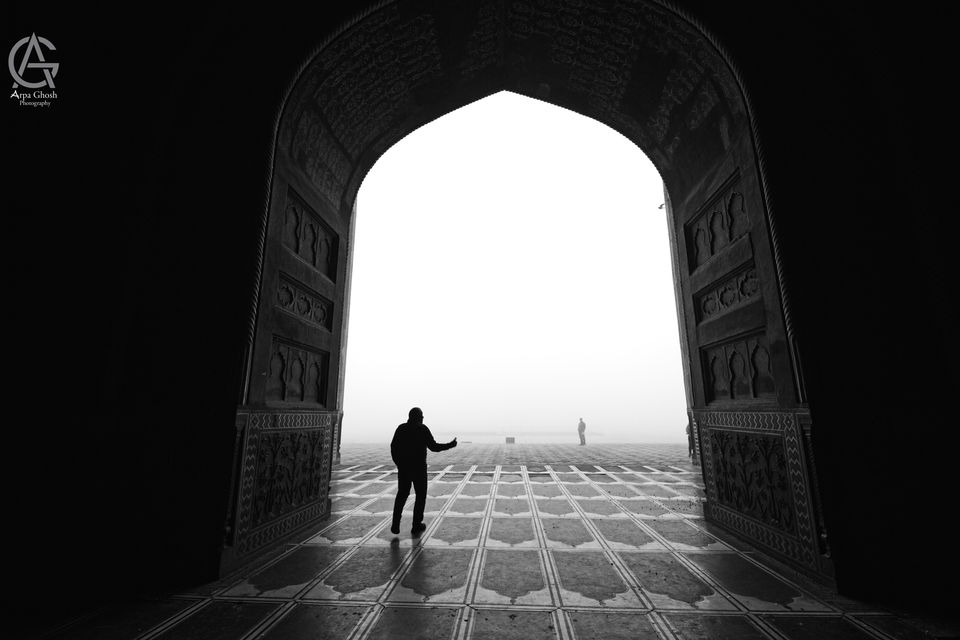 The Yamuna behind Taj, was invisible. The daily visitors, read birds, were having a gala time.

The birds were having their own space 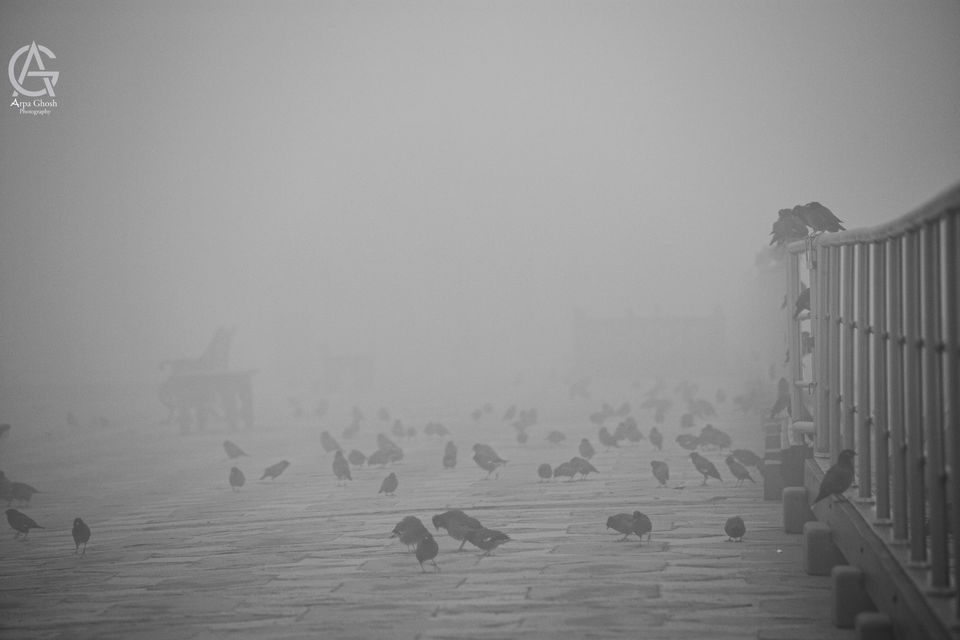 The sweepers were doing their daily chores, of keeping the premises clean. The security guards were manning their posts and preventing over enthusiastic visitors from stepping in forbidden areas. 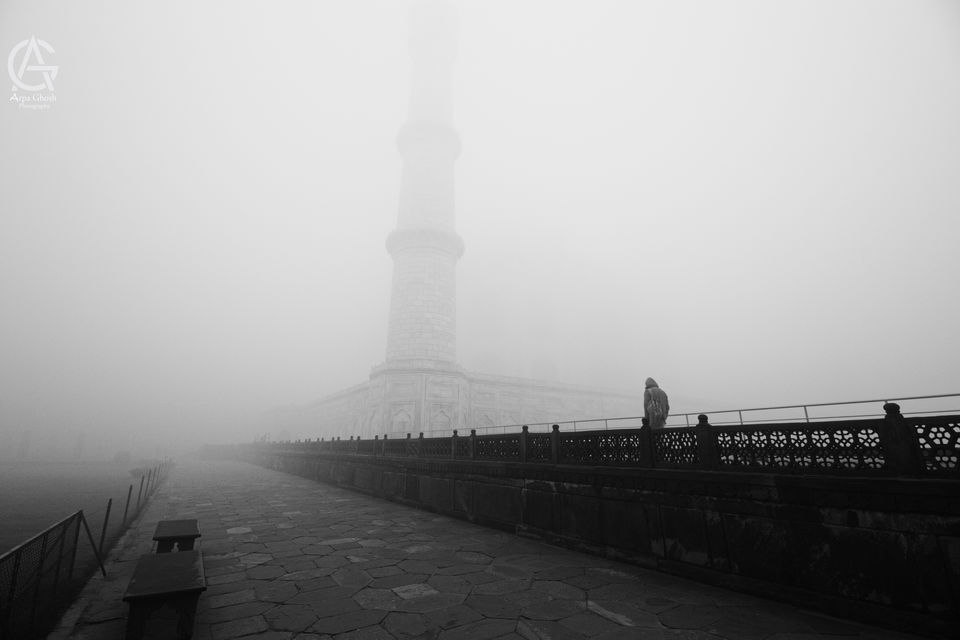 It was not the sight of Taj, that I expected. But as I spent more and more time in the compound, I realized that it was a divine opportunity, to watch the elegant "Wonder Of The World", shrouded in mystic fog. 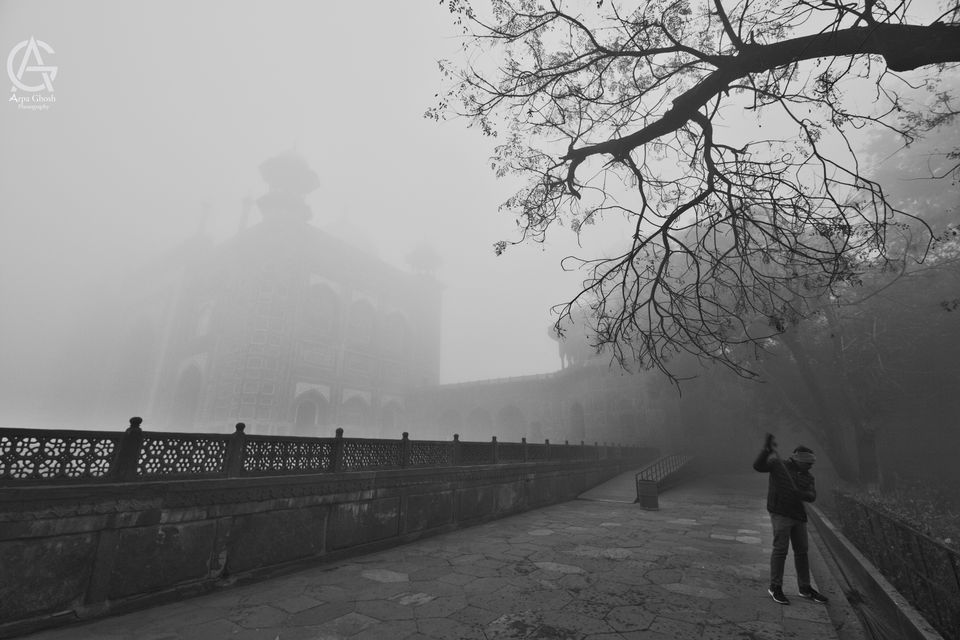 I saw people literally staring at void (read Taj), for several minutes. Hoping to catch a glimpse of the monument, for which they had traveled so far! 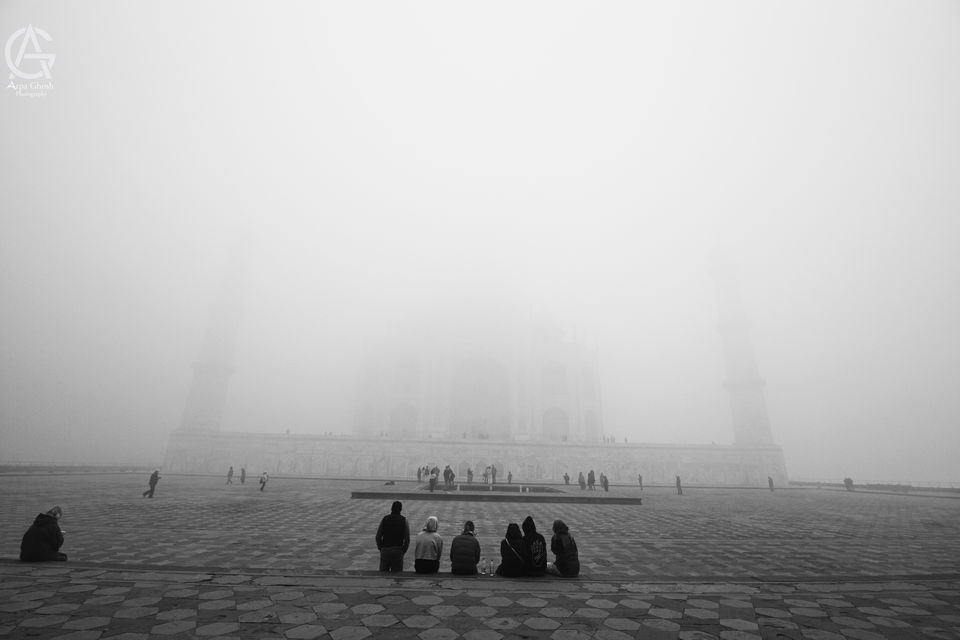 Meanwhile I walked around Taj 3-4 times, looking for symmetry, vantage points and what not. I was overwhelmed by its grandeur. 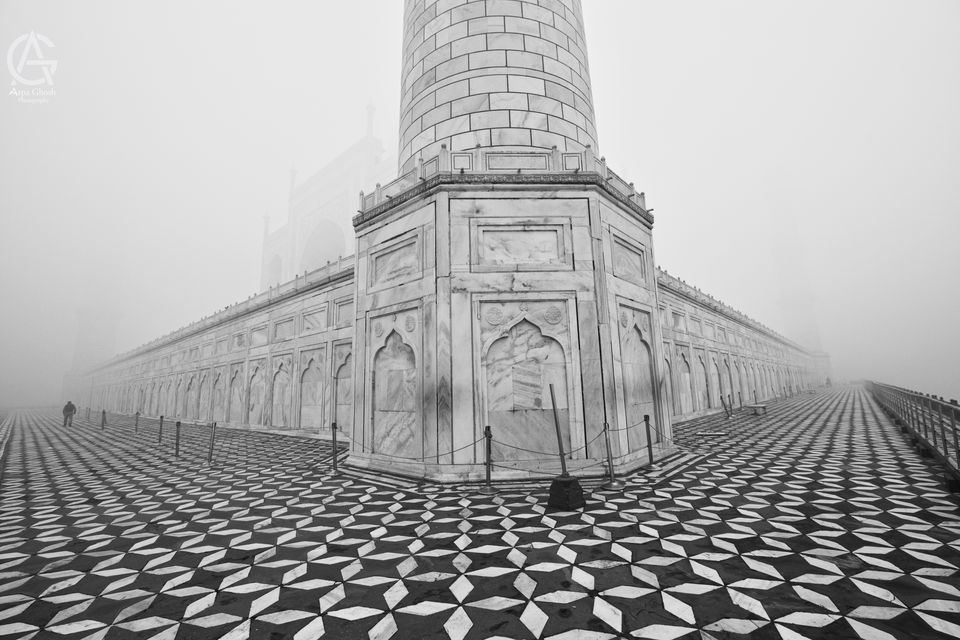 I also included people in my frame, to kill the void and also gives a gigantic perspective of the monument.

Stroll across the courtyard 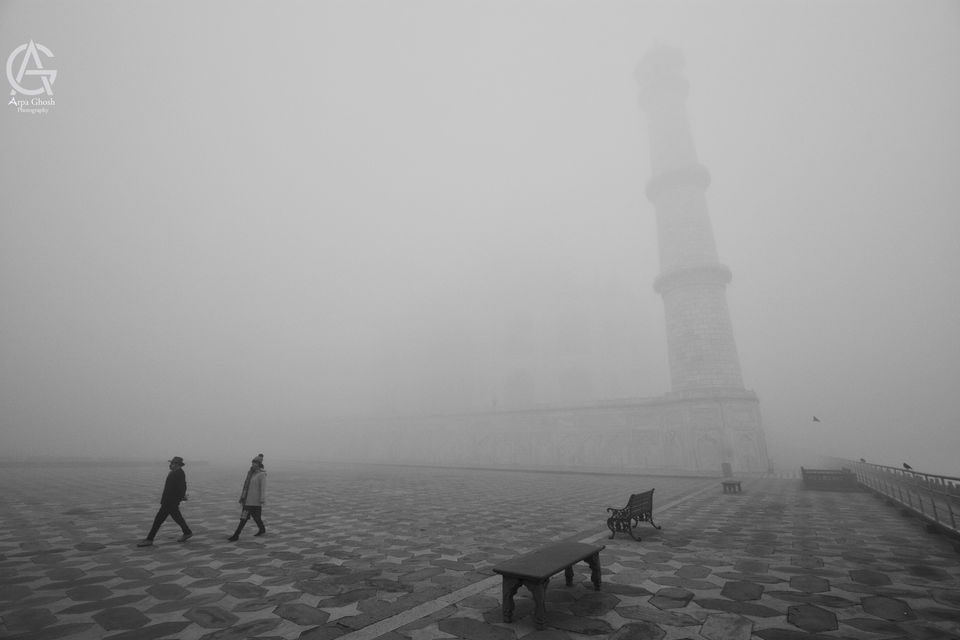 Meanwhile I was also requested by several lovey- dovey couples to click an image of them. I happily obliged!

Love is in the Air 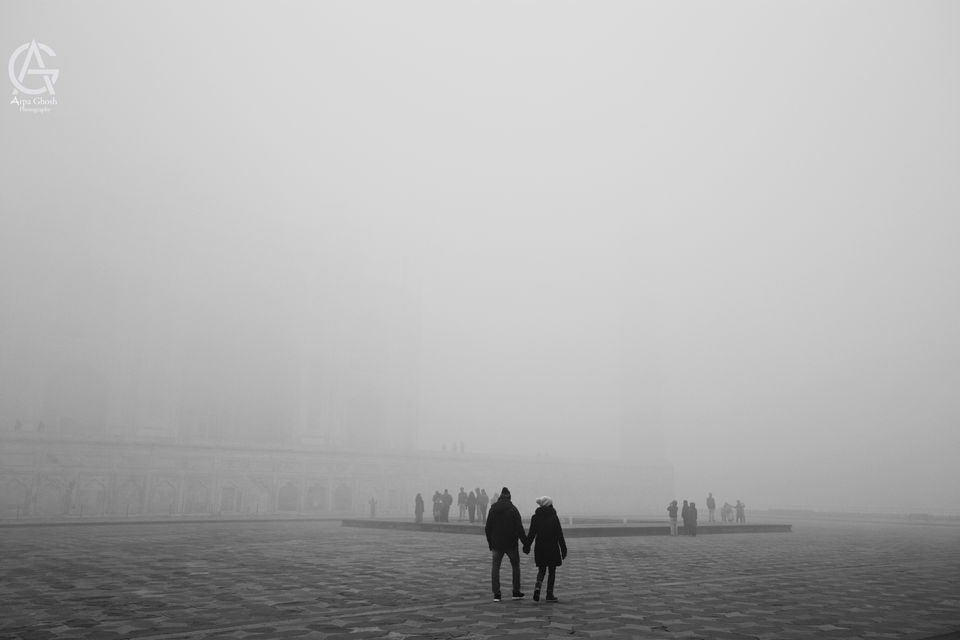 I was there till 8:30 am. By then, most of the mist had disappeared. It was a cloudy and dull Saturday. Visitors started pouring in thousands. Even Taj looked pale, compared to the early morning glory. I knew its time to leave. While leaving, I stopped at the "Great Gate" and turned back to witness the glory for one last time. Forever beautiful! 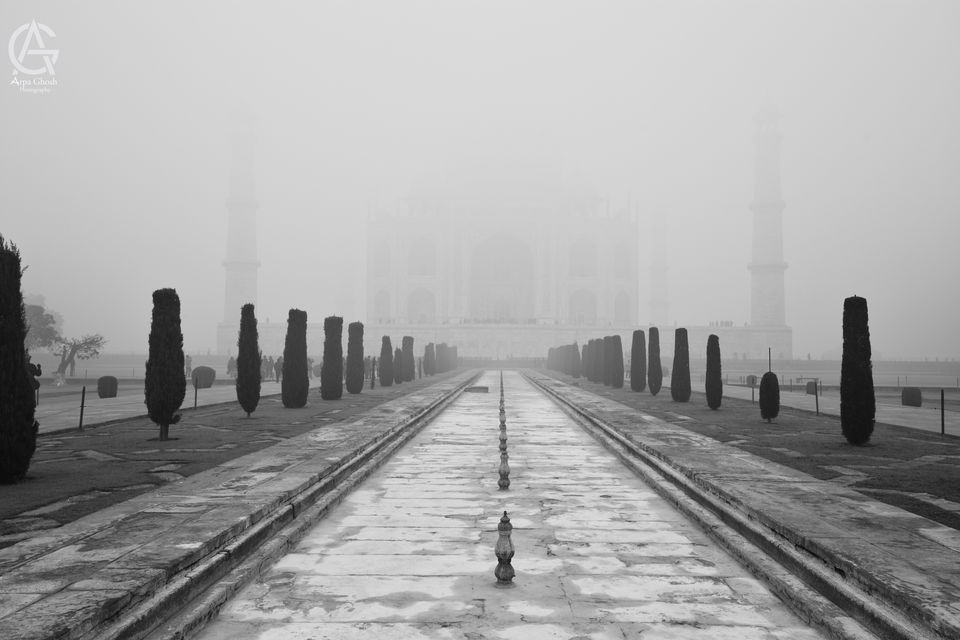