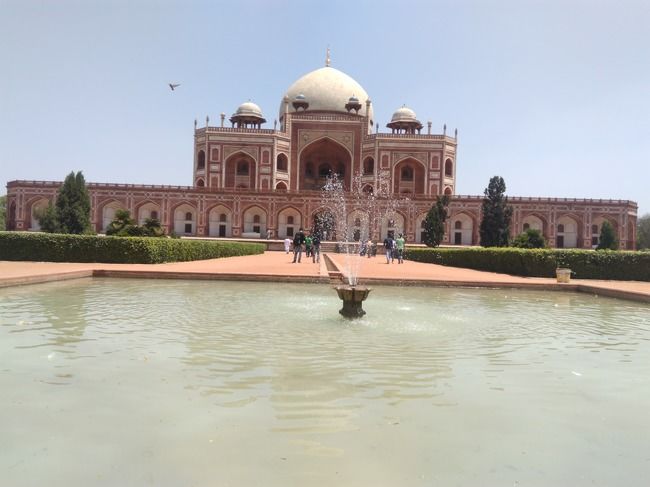 The sky was clear and blue was the colour when I went to explore the sovereignty of the Mughal Emperor “Humayun Tomb” .This masterpiece of Mughal era is located near the crossing of Mathura road and lodhi road ,New Delhi.Jawhar lal Nehru is the nearest metro station to reach this wonderful place.

When I saw the tomb,the gigantic structure literally gave me ‘goose bumps’ .The tomb not only verbalize about the unmatched creativity of the Mughals but it is a symbol of love and affection as the mausoleum was built by the Humayun’s begum “Hamida Banu Begam after his death in 1565 AD.

The Mausoleum is amalgam of Persian and Indian style of architecture and was engineered by” Mirak Mirza Ghyath” who was not only the master mind of Humayun’s Tomb but designed many structure across the country.

“Humayun ka Makbara ( Humayun’s tomb) is the first building to use Persian concept of double dome as well as the first tomb of its kind surrounded by garden constructed to the end of time in Indian subcontinent.

The Tomb stand in the centre of the beautifully styled ” Char Bagh” (as the whole garden is divided into four parts) connected with water channels, having its main entrance from the south and other from the west side as well.This was the first time when red sand stone was used in such a grand scale for its construction.

Apart from Humayun the complex is the final resting place of his wife Hamida Bahu Begum,Shah Jahan’s son and many other prominent Mughals.

The tall Ashoka trees which embellishes the beautiful garden with their willowy outgrowth compliment the structure and clash with the magnificent complex to deadlock visitors attention.

While exploring this mammoth complex I got drained and I sat down into the lavish garden which was superbly maintained and it was venerating the tomb,made me spell bound.

But I could hardly stop my self from clicking the pics of such a mesmerizing views of the complex.

I had a phenomenal day at Humayun’s Tomb ,see you guys at another interesting and eye catchy destinations.